Here at Malt, I’m quite adept at having my ear chewed off regarding some contentious topic over, or regarding, a dram. In recent months it’s been about the odd book review, but mostly bottles and specifically the failure to acquire an indicated target.

It’s an inevitable situation given the rising prominence of auction sites and investment articles and so-called experts, existing only to line their own pockets on the crest of a whisky boom. Albeit a different type of boom from the sort we’ve associated with the industry previously. The secondary market I accept does serve a purpose. We’re able to track down that bottle that’s proved elusive, or a foreign exclusive that you’ve always wanted to experience. Long may the uneducated overlook the Tormore and other such gems. Through such conversations I suspect this is only the most visible part of the problem. Much like the iceberg that sank the Titanic, its what remains out of sight that represents the true danger.

Yes, the human condition of greed and need to profit is rife and fever-like. The drums of despair commenced around the Campbeltown Festival and continued until the end of the Feis Ile. The other element and one that is far more efficient are the hoards of international whisky gangs from our soon to be excised European neighbours. Assisted by the falling value of Sterling and propelled by their numerous numbers and impressive organisation. These groups will hoover up desirable whiskies much like a malt of the day in a nearby bar. In some respects I find those complaining are often the pot calling the kettle black, or however it goes.

The whisky game nowadays has higher stakes and unfortunately the secret is out. If you want that bottle then you’re going to have to get up a little earlier and plan ahead.

The whole nature of these festival releases is their limited availability and initial distribution, so just being in the region doesn’t give you a god given right to automatically receive a bottle. Yes, it is incredibly frustrating to see rows of what you failed to purchase appearing online at auction. Many of the distilleries are also complicit in this tsunami, releasing anything fabricated as limited with disputable pricing and some rather elaborate and ridiculous packaging; yes Macallan, I’m talking to you.

So what’s the way forward? Multiple casks or vattings does defeat the festival ethic and in some respects, I expect the distilleries just want shot of these bottles ASAP so they can concentrate on the day-to-day matters. A limit of one per person seems fair with any leftovers being sold at a specific time; again on such a basis. Yes, it’s a pain I’m sure to organise, implement and explain for the 200th time to a punter why they cannot have another bottle. Isn’t that part of the problem with today’s society? We always take the shorter approach and often it’s the one that causes more issues in the long term. I’ve stood festering in festival queues, while some around me only know there’s a bottle being released yet couldn’t even tell you what it is.

Back to reality and this Bunnahabhain 2017 Feis Ile release. The flippers will know that Bunnahabhain much like Caol Ila and Jura, represents one of the less desirable bottles during the Islay week. Yes, I’m doing 2 a disservice by sitting Jura alongside them, but the point is valid. These distilleries lack the blinkered support and thus profit potential of the more collectable Feis releases. Yet sometimes Caol Ila and Bunnahabhain can deliver knockout releases that put the peat infused water of their neighbours to shame. Sadly the 2016 Caol Ila was a little rough and a poor selection overall; it’ll probably be available for sometime to come. Whereas the 2016 Bunnahabhain Moine was enjoyable and this distillery tends to release 2 special bottlings for the festival.

Tom, from Tom’s Jura Love website, was fortunate to be on Islay helping out Global Whisky Auctions with their visit as part of his day-time role, but was kind enough to open a bottle to split for cost. An admirable gesture and thankfully there was no side offer of a Jura either. The release we have here is the Moine edition, which is a Port Pipe finish, distilled in 2004 and bottled at 13 years of age. This would set you back £95 at the distillery and is an edition of 1596, bottled at 55.6% strength. Initially this peated Bunnahabhain was matured in Oloroso and ex-bourbon casks for a decade, before moving into those sweet Port Pipes. In essence, this is a double maturation and a real concoction of casks and heavily peated Bunnahabhain.

Bunnahabhain are trying to do the Islay Festival justice with their releases and by offering a Day Tripper event, which I experienced in 2016. I actually received the kind offer to reprise my role in 2017 that I had to decline due to my burgeoning whisky calendar and office commitments. Yes drammers, this is a hobby and not a full-time job, believe it or not, although its getting somewhat ridiculous these days. If Whisky Rover is up for an award one day, that’ll be the perfect moment to stop or stick this site behind a password firewall. Time for the ‘Bunna and Islay.

Colour: worn copper
On the nose: a density of bran flakes and a coastal moss layer. It’s a sweetie with caramel notes, brass shavings and chocolate orange. There’s a hint of chilli in here as well, an element of honey, stewed plums, salty driftwood and a touch of smoke.
In the mouth: a very pungent peat layer that feels as its fighting against the sweetness. It’s a little unbalanced for my palate and one that would improve with water. It does remove the coarse coastal edges leaving more of a vegetative, honeycomb, dirty vanilla affair. There’s an element of dryness to the finish with cranberries fondly revived, roasted coffee beans and orange peel.

I’m reminded somewhat in flashes of the recent excellent the Longrow Malbec bottling with the mixture of earthy tones and flashes of red. However, this Bunnahabhain is more forceful, direct and less cultured. I suppose you could say Islay in nature. The peat element feels harsher, more amplified and overall less harmonious. Still, its a tasty and rather robust dram that will go down well on a cold winter’s evening. Perhaps I’ll try it again later this year when the climate is more suitable. 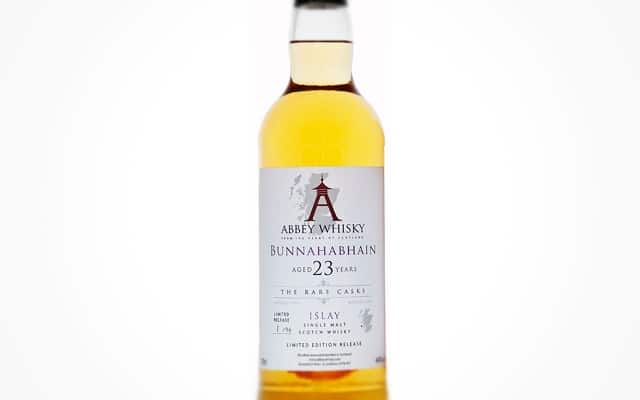