It’s hard to believe the summer is in full swing, with the schools out and the sunshine spells sweeping across Scotland. In the background, that familiar sound of suburbia rings loudly with cars being washed and grass mowed. It’s one of my least favourite times of the year as I much prefer the driving wind and relentless rain that ensures Scotland can produce whisky.

The arrival does herald another event with the hubbub surround July 4th, which traditionally means a national holiday and inspiring terrible films of the same name. Nowadays non-fiction is far more entertaining than fiction when it comes to events across the Atlantic. Admittedly, it has become the dominant culture with the aforementioned schools doing such things as proms nowadays and many other events becoming Americanised. Things certainly have changed since I was a lad, and not necessarily for the better.

A visible growing trend is the popularity and availability of American whiskies. Many are heavily branded and advertised, free somewhat of the stigma and ruleset that dominates Scotch whisky. Last year I wrote an article about drinking in bars across Vegas and whilst I did discover some rather good examples it was a real slog. For every interesting and provocative whiskey, I had to endure at least 5 tumblers with the same limited set of characteristics. Being used to the majesty of Tormore and Springbank, American whiskies are a different proposition and in many cases suffer from tunnel vision when dissected.

When the Whisky Wire announced a Heaven Hill tasting on Twitter, I thought it was about time I stepped into the breach once more. Casks from Heaven Hill are favoured by several distilleries that I’ve visited and somewhat coveted. In recent years the focus around American whiskies has grown, as have the prices for the older stock with many bottlings becoming extremely lucrative. Much like Scotland, they’ve experienced a shortage and the stampede to make a quick buck. This was underlined when Cadenhead bottled a Heaven Hill as part of its 175th outturn at a mighty 20-years-old. Given it was amongst fine company in that month’s release with a Banff, Convalmore and a Caperdonich amongst others; it was the most sought-after bottling. I know the guys in the Edinburgh Cadenhead store couldn’t figure out why so I had to tell them.

In 1996 a fire of Banff proportions destroyed the original Heaven Hill Bardstown distillery including some of the warehouses. The industry rallied around to help a fellow producer but clearly, for the long-term Heaven Hill needed to establish a new distillery. This was acquired 3 years later with a Diageo distillery in nearby Bernheim, founded in 1992, that had closed subsequently and lay idle. Now Heaven Hill produces at this site but its warehousing remains at Bardstown ultimately meaning that enthusiasts prize distillate from the original distillery.

History lesson aside, we’re here to look at Heaven Hill today and some of its more affordable whiskies. The tasting comprised of 4 examples, each with a subtle difference and as ever an online tasting with a roster of picked talent and then Whisky Rover. After this, I better start on those Vegas discoveries as well. 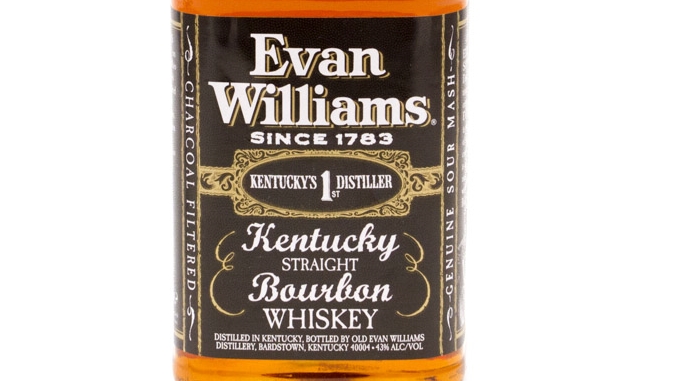 Bottled at 43% strength, this brand was launched in 1995 and named after an industry pioneer. Produced as a single barrel vintage such as this 2005 single barrel I reviewed previously, these can be around 9-years-old and will set you back around £35. It’s a Kentucky straight bourbon whiskey meaning it must consist of a mash containing a minimum of 51% or a maximum of 79% of corn. Other grains make up the remainder and it can only be called Kentucky if it has been produced and aged in the State. It also has to be distilled at less than 80% strength and matured for a minimum of 2 years in new, charred, white oak barrels no higher than 62.5% strength.

Colour: honeycomb
Nose: a subtle honey with a touch of orange zest shrouded in a musty attic presence. Almonds and peanuts follow, then toffee and milk chocolate.
Taste: a bitter vanilla with crushed almonds, a touch of cream, pencil shavings and more of the milk chocolate with some fleeting pepper and all-spice but little else.

Overall: a perfectly agreeable nose if a little timid, the palate is disappointing making this the least agreeable whiskey of the evening. 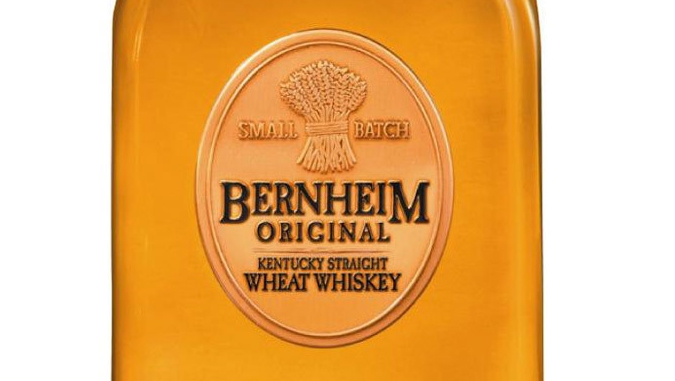 This is a 7-year-old straight wheat whiskey, which means it contains at least 51% wheat and can also be called straight if it has been matured for at least 2 years in those new, charred, oak barrels again. A bottle of the Bernheim will set you back around £60. It relies on winter wheat that supposedly provides a more delicate yet sweet characteristic. The mention of winter grain reminds me of the Indian Corn 31-year-old Potter Distilling whiskyI recently reviewed. Bernheim is naturally coloured without any flavouring additives (that can be added legally in the US in small quantities) and is bottled in batch runs.

Colour: a pleasant butterscotch
Nose: nothing upfront initially, rather relaxed and subdued. An overriding feel of cracked wheat, all-spice and a vanilla caramel. The freshness of apricot followed by almonds, a spoonful of maple syrup and buttery raw shortcrust pastry. Water I felt delivered more fruit from the background with strawberries.
Taste: much like an American highway this is flat and straight with a long vanilla finish buffeted by the kick of alcohol. There’s caramel once again, a touch of honey, more of the all-spice and the buttery aspect, but it’s struggling in the slow lane.

Overall: this has a good nose that sets up expectations but the palate is rather Glenlivet-like i.e. safe and a tad boring. Potentially a good mixing ingredient and I’d be happy drinking this as a session whiskey, but around half the current retail price. 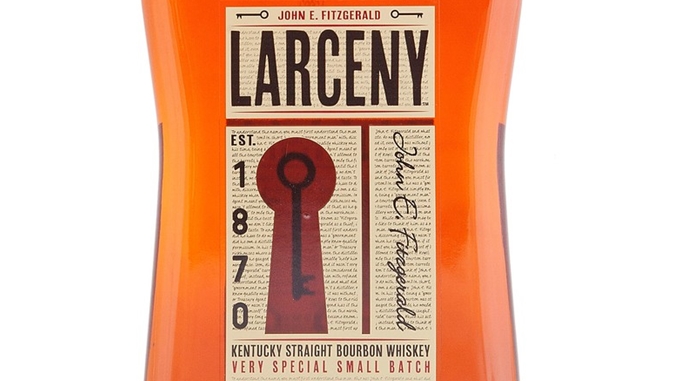 It’s called Larceny for short and you can appreciate why. The bar would have closed by the time I’d have gotten through that line. Fitzgerald is another colourful character from the annals of American distilling, moving on this is a 6-year-old whiskey and its second grain is wheat rather than rye. This results in the aforementioned influences outlined in the Bernheim original. A bottle of Larceny will cost around £47.

Colour: again its butterscotch
Nose: a slightly weathered orange is my initial thought before the sweetness of spun sugar comes in. There’s a nutty characteristic that’s pleasing enough mixed in with the light vanilla airing alongside the inescapable feeling of Corn Flakes. Then raisins, dates and a little sweet cinnamon.
Taste: the cereals move across the palate, combined with caramel and a resin sweetness. Almost a malted loaf finish with added pepper and a vanilla legacy.

Overall: perfectly pleasant once again, just that price tag which to me seems on the wrong side of £40 overall for the experience. 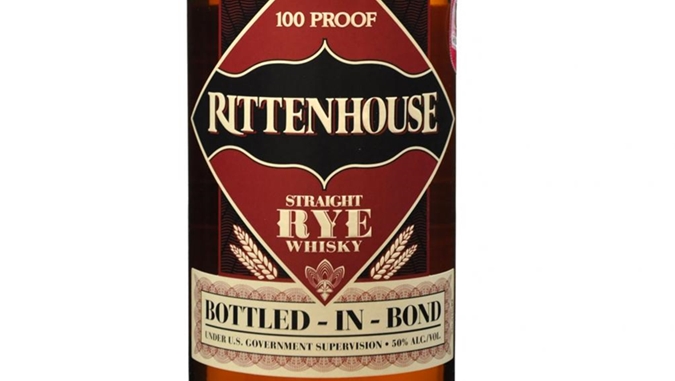 This is a rye whiskey, always a favourite here, done in the Pennsylvania style hence its name. It’s an interesting coincidence as I’ve just recently finished an article on Dad’s Hat distillery that focuses solely on the Pennsylvania style and rye whiskies. Whilst that’s incoming, this Rittenhouse will set you back in the region of £36 and is bottled at 50% strength. Technically this must be aged for at least 4 years in barrels and bottled at 100 proA of. If it also has bottled in bond on the label, then it’s the produce of one distillery, consisting of a single season in the same year.

Colour: caramel
Nose: a big spoonful of cream with vanilla. There’s a faint echo of what might have been here with some black pepper, cardamom, toffee and a fleeting ashy note.
Taste: a very enticing crème brûlée with a torrent of vanilla that pulses through into the finish. Some honey and char from the cask, with dark chocolate and a cracked black pepper bite.

Overall: direct like a North Korean missile and one that may occasionally land somewhere within the region of its original target. A solid rye but lacking the real depth I like from this genre, but the price is reasonable for the experience.

There is potential across this assortment, but also the sheen of consummate professionalism. These are very slick whiskies and as such may represent the anti-craft establishment to the smaller independent distilleries that are gaining a foothold in America. Generally, I find them to be best suited for mixer ingredients or solid cheap drinkers that offer reliability, monogamy and commitment. Whether or not that’s your thing, is entirely down to you.