I’m still undecided about tennis, particularly as it dominates the airwaves with Wimbledon currently in full swing. What is the most unsettling aspect is yet to be determined. Whether it’s the prospect of watching two individuals trading grunts for several hours, or the falseness of onlookers divulging their champagne and Pimms followed by a procession of strawberries and cream, then luxurious ice cream and I haven’t mentioned Cliff Richard yet. It’s all a little too English and from a bygone age.

Ideally, I’d rather be sitting down for the grunting competition – minus face paint or stupid paraphernalia – with a whisky, preferably a bottle to endure the onslaught. However, security being what it is nowadays and more likely the need to secure profits for the organisers, I’d have to make do with what is on sale within the compound. Having yet to attend this Shire themed event with gentry folk, I’d presume the usual contenders would be Glenmorangie, Balvenie, Glenfiddich and don’t dare ask the manservant for a lager.

Whisky in the summertime is a lovely thing; it gives promise and identity to drams that would normally be overlooked for their youthfulness, limitations and characteristics. Even the bitter disappointments, such as the Highland Park Valkyrie, can find a new lease of life thanks to mixers and taking those limited flavours and injecting something else. I’m not adverse to a ginger beer or Irn Bru with a whisky or bourbon. It tends to mask the unpleasant and basic construction of some whiskies, leaving the good stuff for another time.

Summer feels a distant promise currently as I type this on a train rolling into Edinburgh. Outside the air is thick with an endless promenade fine rain. It’s a guaranteed drenching for individuals unprepared for staying more than a few minutes outside. The prospect of teenage temperatures and the national hobby of stripping off whilst trying to locate those deck chairs will have to wait for another day. Still, it doesn’t mean that whilst indoors we cannot engage in a summer whisky particularly with the sound of grunting and Andrew Castle in the background; I’m undecided which I find more annoying. Mmm, come to think of it, Andrew Castle is one of the more unpalatable aspects of the Wimbledon coverage.

We’ll roll back a couple of hours, to when I was dodging the minefield of tourists and Dramboree survivors scattered across the pavements of Edinburgh. Navigating my way towards the Holy Grail of Cadenheads to tackle my bottle stockpile. Entering the aforementioned premises, I was greeted by various members of the YCT (Young Cadenhead Team), and a rather depleted blackboard of financial doom. A new arrival via the Emperors Palace in Campbeltown had been dispatched to boost their numbers. This had seemingly been well received by the YCT and their spokesperson, Donald, had vouched for its qualities. Now, this is interesting for those that have yet to visit this whisky essential, as a Campbeltown native Donald is only partial to whiskies from this region, peated expressions from elsewhere or Clynelish. That’s your lot generally and everything else is frowned upon. Maybe, Linkwood on a nice day but as I have already stated Linkwood’s are frightfully dull; much to the horror of the Linkwood collective. 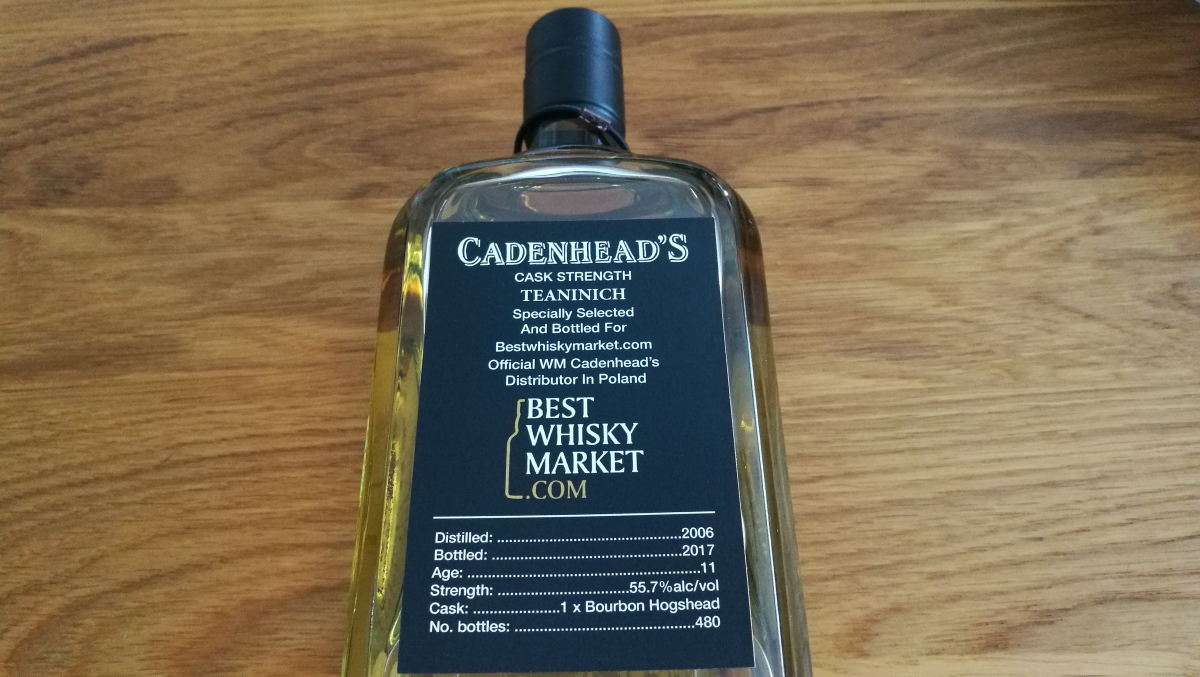 Recommending a Teaninch therefore came as a surprise, but the flavour profile of strawberries and cream (ah yes, now you see the DJ styled link for this piece) had won many over. Whenever I’m given a whisky and notes are offered up in advance its easy to fall into the trap that the power of suggestion offers. Brand Ambassadors hone their skills, whilst giving us verbatim and 75% of characteristics that in reality don’t exist in the glass you’re faced with.

It’s easy to be led or influenced with a whisky and I’m not talking about the effects of excess. Therefore, you have to stay true to your beliefs and gut instinct. Do I like this whisky? Is it one I would enjoy? Is it worth the asking price? Is it a Jura? These are all things that run through my head along with a million other pointless signs of madness. Ultimately, for £55 this Teaninich I felt was a bit of a steal. An 11-year-old, distilled in 2006, before being bottled at 55.7% volume from a bourbon hogshead. This resulted in an impressive outturn of 480 bottles almost all destined for Cadenhead’s Polish distributor, but some had ended up in Edinburgh.

Teaninich is just up down the road from the village of Alness, which in itself is a couple of minutes’ walk from the fake tan emporium known as the Dalmore. Despite its advanced age and recent high profile investment, Teaninich is rarely seen officially or even discussed. It’s distillery I’ve had mixed experiences with hence the worthwhile nature of trying before you buy.

Colour: crushed white grapes
On the nose: an initial arrival of a slightly sour green apple moving into cream soda. There’s a delicate and light lemon sponge, a gentle vanilla buttercream icing with barley drops and meringues. Then the unshakable presence of strawberries and more cream. With water a floral nature appears, but more noticeably pear drops and caramel with a little melon.
In the mouth: very drinkable at cask strength, poached vanilla pears and a slight cask char with freshly made tablet. More of the combination of strawberries and cream, with water more sweetness is revealed with icing sugar and juicy apples.

It’s a 5 set winner! This Teaninich is one of those whiskies that doesn’t demand too much attention or buries its qualities. For £55 you’re purchasing a whisky that is very approachable and quaffable. I enjoyed this far more than the 17-year-old Teaninich Manager’s Dram; another ace from Cadenheads.