Entering any supermarket I engage the autopilot mode. This is a chore that needs to be orchestrated and performed on a regular basis, with the final goal being to literally escape. During the cavalcade of dodging trolleys propelled by those who just don’t look, or rampant kids who feel they’re in a playground, there is the welcoming solace of the whisky aisle.

Within this forest of bottles, you can visualise the pressure that Scotch is coming under from other spirits, mostly gin currently, and the onslaught of craft beers. You’d be wrong for expecting that because I live in Scotland this means the aisles are brimming with choice. Sadly, it is fairly pedestrian and uniform fare on offer, regardless of which establishment you frequent for your wares. Any bottles on sale are snapped up with delirious abandonment noting that blends prove to be the most popular segment of the aisle.

It was last Sunday morning I found myself in the German supermarket chain, Aldi, who have offered a small selection of whiskies often bolstered with the occasional special release tied in with Father’s Day, Christmas etc. A new arrival was evident in the form of this bottled called Hogwash – interesting concept – a blended Malt Scotch Whisky. Priced at £14.99 it seemed fair enough on paper, fitting snugly into an obvious gap between Aldi’s bargain blends and its Glen Marnoch single malts, which are rock solid experiences for the price. A couple of photographs for the Twitter and Instagram masses snared, I was then free to plan my escape.

That was the end of it, or at least I had thought so. Given my focus currently is on keeping up with Cadenhead’s and their monthly outturn with the occasional Tormore or Glen Mhor, Hogwash was left for another day. Then Twitter took up the bait with others seeking more information on the blend that apparently is just a trial release in certain Aldi stores. This testing of the water prompted me to return and purchase a bottle for further investigation given the level of interest in the said contents.

Visually the concept brings back memories of Monkey Shoulder and The Feathery that are both blended malts. Hogwash does possess a decent cork, which is always a small sign that some thought and capital has been spent on a project. However, it does seem a little misconceived with the array of marketing buzzwords and phrases that adorn the labelling without telling you much at all about the contents. It’s not as bad as the Highland Park Valkyrie, but here we have a small batch, handcrafted, premium Scotch malt whiskies, limited release, artisan blend, blend no.08; I’d like to know what happened to 1-7 prior to this? Ultimately these words mean very little and their tossed array suggests a scattergun approach squeezed onto the bottle that comes without packaging. A bottle for hipsters? Do hipsters frequent Aldi? 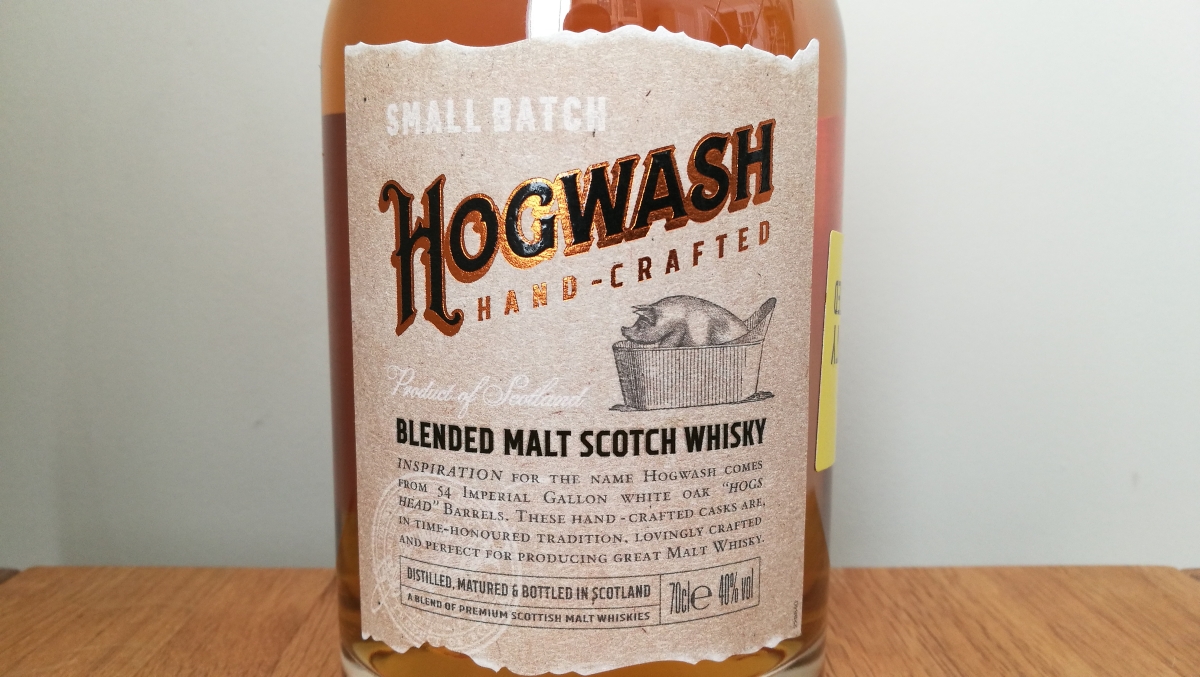 The most important word on the label is malt, so you immediately know this doesn’t contain grain, which litters many famous blends around this price point or slightly more. Given my experiences recently with the Famous Grouse Smoky Black, for instance, the grain content is more to the fore nowadays leaving an industrial metallic quality throughout the experience. At least Hogwash is devoid of its presence. It’s also the basic entry strength at 40% and features no statements regarding its natural qualities; meaning its chill filtered and coloured to a certain degree. For whisky enthusiasts, this underlines the mockery of phrases on the label, but the masses, in reality, don’t care about such things only the experience and affordability of the product. There are no clues either to who put together this concept other than your standard Aldi contact details.

The name itself and the premise that the use of hogshead barrels can then take a leap and inspire some form of hog, or pig, roasting etc. follows the leisurely approach of the labelling. A little more focus would have paid dividends. As such I prefer to refer to this blend as Hogwarts and since making the connection I cannot get an array of images out of my head. The thought of those young teenagers in their private Scottish castle educational retreat, enjoying some of the local produce behind the broomstick shed with other illicit shenanigans is a tale that needs to be told. Hermione snuggling up to Harry, both fuelled by a skinful of Hogwarts blend, direct from the science laboratory and since has become a rampant menace across the campus.

Let’s not overlook the devastation this Hogwarts blend has created amongst the elite Quidditch teams with a series of in air collisions, errors of judgement, poor reaction times and ultimately a serious dip in form. Even cheeky old Professor Dumbledore has taken a shine to the good stuff and turns a blind eye to the obvious problems being reported by his teaching colleagues. Realistically, I doubt whether J.K. Rolling would sign off on such a deal, but you never know till you try. I’d best stop before I’m sued again. For now, we’ll have to continue with the Hogwash name as it stands ready for the Wizengamot tasting verdict.

On the nose: there’s a youthful flamboyance here with a sizeable array of oranges and sherbet. A light chocolate presence moves into a gentle Parma Violet before Custard Creams take control followed by boiled sweets and a sugary shortbread. The addition of water delivers cherries and apples with elements of cream and orange zest.

In the mouth: there’s an initial sweetness the nose doesn’t prepare you for and a belief that it’s 43% strength. That burst of orange is followed by almonds, fresh root ginger, red liquorice and a drying and slightly bitter finish. Returning with the addition of water reveals more shortbread, vanilla, apple peelings and a touch of hops on the finish.

This is a very inoffensive blended malt with a Speyside themed experience. There’s just enough detail to keep you interested thanks to some of that Hogwarts cask magic and reflux. It does have potential as a mixer or a light evening starter dram. At a price point of £14.99 there’s very little here to criticise or complain about – sadly – when other blended malts such as the Monkey Shoulder are circa £26.

Ultimately it’s probably not my style of blend given my historical preferences, but I cannot find much to criticise after a few drams and the all-important price, which is a fair reflection of what’s on offer.

Scottish Leader is a blend you’ll see sitting on the supermarket shelf but in all likelihood haven’t reached for a bottle as of yet. I..