Chances are you’ll most likely skip this review, or walk on by, thereby avoiding this unfashionable distillery. Keep on walking fashionista. We’re bombarded with trends, fashions and what to drink and more importantly for our North American cousins; what looks dapper in a tumbler with ice in some wood panelled drinking establishment.

Keep on walking. Wax lyrical about your Glenfiddich’s, Balvenie’s, Macallan’s and their ilk. Many I feel arrive at Base Camp on their whisky journey and never leave for the next destination. I once had a discussion with a cardiologist on the Amalfi Coast whilst on holiday. Macallan was his tipple of choice and when I asked if there was anything else that he enjoyed his mind was blown by the prospect that there were other distilleries in Scotland. Ultimately I feared for him, given the spending spree he was intoxicated by, finding all these wonderful Macallan’s in various stores across Italy. I suppose the concept of fakes and if something is too good to be true, then most likely it isn’t, hadn’t crossed his medical orientated brain.

Right, I think the dedicated followers of fashion and brand ambassadors have now moved on up and over the hill. Time to talk about actual whisky. Balmenach isn’t going to prompt any headlines, in fact it’s more likely to appear in the press due to the gin that’s produced on site. This popular beverage is known as Caorunn and that’s all I have to say about it. Oddly, you can visit the distally as part of a gin tour, but there are no whisky tours available. Nicely linking us back into fashion.

Well, I don’t know about you but the prospect of a gin tour versus a whisky experience is an easy decision. However it sums up Balmenach that has been around since 1824, when the passing of the Excise Act into legislation sparked a cluster of legal distilleries in Speyside. Yeah, you’ll have heard of Cardhu, maybe even Mortlach but Balmenach? It’s off the radar and with no official single malt presence its down to the independents to satisfy our thirst for new experiences. 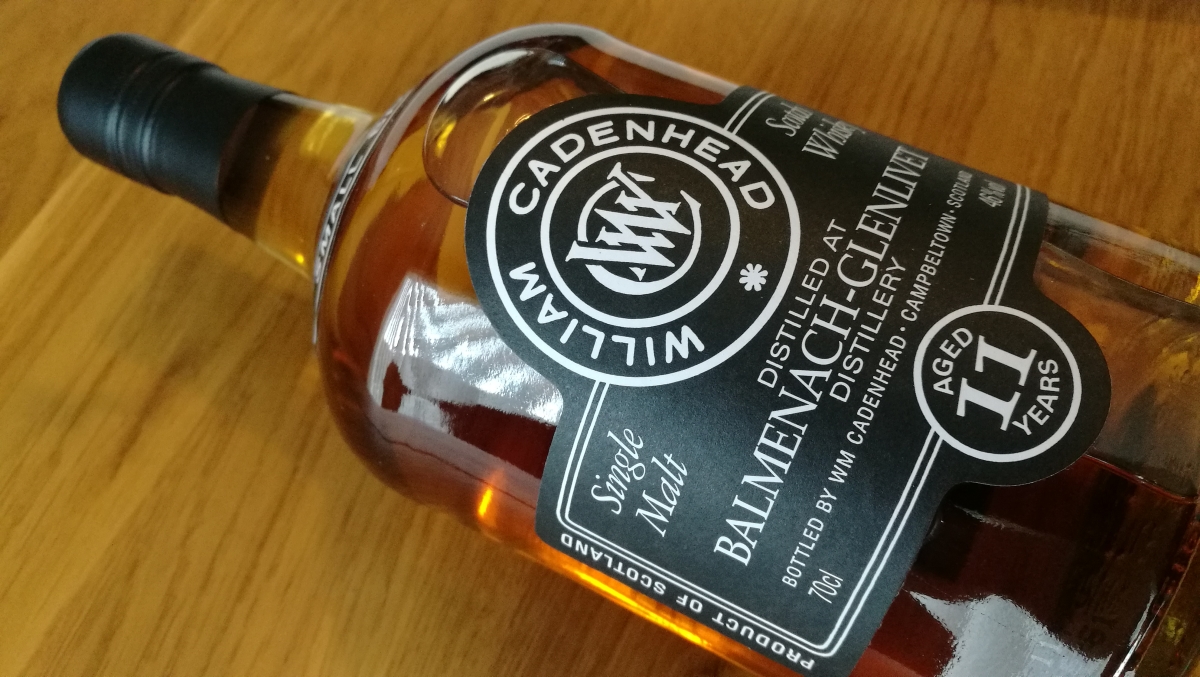 Thankfully the independents realise that their support should not be exclusive to the well-established brands; some of who do not take kindly to third party releases bearing their name. Balmenach for now doesn’t have to worry about such a problem however don’t write off such distilleries just because they don’t dominate the agenda.

This Balmenach was purchased at the Edinburgh Cadenheads store. It was an opportune finding as the lads had discovered a bottle or a leftover had come in, I cannot remember which but the proposition of the distillery and a sherry cask were reasons enough. For £55 I walked away with this 11-year-old that was distilled in 2005 and bottled in 2016. Forming part of the Small Batch range, this is bottled at 46% and is a marriage of 2 sherry hogsheads. It’s sold out in Edinburgh, but may be able to stumble cross across a bottle given its a Balmenach.

Actually, a quick search in my pile of samples turns up another Balmenach. This time its a 10-year-old bottled by Douglas Laing as part of their Provenance range. Distilled in November 2005 and bottled in May 2016 at 46% volume from a refill hogshead (cask number 11247), its long overdue a review. So we’ll put it in here for comparison. The range showcases younger whiskies at a reduced strength with a price to match and the article I wrote on a Douglas Laing tasting is one of the most popular articles at Whisky Rover, so that must tell you something! Thanks to Tom of the Lord of Rings Re-enactment Society fame for the sample.

Colour: dying embers
On the nose: there’s the comforting presence of roasted hazelnuts and a touch of tobacco before a brown sugar sweetness leads us into stewed apples. A chocolate coffee thing before the dark chocolate takes us towards a delicate orange. There’s a toffee and pecan appeal to the nose as well.
In the mouth: gentle on the palate with caramelised pears, milk chocolate and a thin layer of all-spice, cinnamon and black pepper. More of the toffee and pecans but not much else with a little dark chocolate and aniseed on the gentle finish.

I’ve been enjoying this Balmenach because its unassuming, no thrills and offers just enough character for your hard earned cash. Keep chasing those fancy bottles and I’ll hoover up wee gems like this. Cheers!

Colour: cream soda
On the nose: quite spirit-lead with green apples, icing sugar and wine gums. There’s oddly a washing up liquid aspect in a Fairy sort-of-way that moves into a thyme freshness. Returning, this has transpired as green olives, white chocolate and mint leaves. Water reveals orange oil.
In the mouth: creamy vanilla marshmallows with a slight nutty aspect. There’s a sugary coating as well, an apple buoyancy plus a twist of lemon.

I had a quick look online and certainly this one seems to be available from various sources including Robert Graham for £41.99. That link is just for your convenience, as I have no interest in commission, so if you’d like to tackle if for yourself then you can. If this Balmenach was nearer £30 then I’d consider it worth the experience as there its limitations are apparent, but its a nice starter dram.

So there you have it; a duo of Balmenach’s from the same vintage but on different journeys. Clearly the Cadenhead is the knockout here but from my discoveries generally, Balmenach has much to offer.