A couple of weeks ago as I write this there was a disturbance in the force, a faint pulsating echo, prompting much backhanded whispering and a rise in blood pressure and bodily fluids from the congregated masses online. Then the news itself reached me during the Cadenhead 30th Anniversary tasting, that Chivas were bottling a 23-year-old Caperdonich that would only be available at Strathisla distillery.

There’s some serious effort being expelled to acquire such releases nowadays from the flipper and investment brigade. News spreads like wildfire and the fact I was actually pouring a Caperdonich, as an under the table extra during this tasting to friends was a coincidence. That particular bottle was a release from the Whisky Broker several years ago, priced at a ridiculous sub £50 when Caperdonich was pretty unfashionable and a variable whisky. Heck, even Tweedlord himself Mark over at Malt-Review was a Caperdonich collector back then; the only one I knew of in existence.

A common characteristic of Caperdonich is its peppery aspect; this through patience often fades away the longer you have the bottle open and brings out more of its classic fruity qualities that were a core feature in earlier releases. It was the case with the Whisky Broker release that showed a bottle opening aging effect. Needless to say, despite the best efforts of Cadenheads that evening, I felt I poured the best dram. The reason for taking the bottle along was Mark Watt, who names Caperdonich as his favourite distillery and rarely leaves home without a bottle. It would have been a fitting tribute to his assault on our finances in 2017 to share a Caperdonich, but that’s for another time.

For many years Caperdonich was the Skoda of the closed distilleries. Not highly rated or desired, and available in increasing numbers at dwindling prices. Those days are consigned to the history books, much like the distillery itself when in 2002, Pernod Ricard, deemed it surplus to requirements and sold the site to the neighbours. Up until 2001, Caperdonich was fairly active producing whisky, before Pernod Ricard decided to shut things down. This explains the abundance of casks from a few years ago and the likelihood that Chivas has a decent inventory of maturing stock.

Caperdonich was remarkable for many things, commencing with the vision of it being a secondary distillery known as Glen Grant number 2. Not an inspiring or auspicious start to its eventful life in 1898. The green shoots of a new beginning were halted in 1902 when the distillery was mothballed due to the Pattison crisis that blighted the whole industry for years to come. Caperdonich stood idle until 1965, when it was revived to assist its parent distillery, Glen Grant.

Investment was unleashed in 1967 when the number of stills was doubled, before they reverted back to their original shape in 1985. In-between all of this, the distillery was given an appropriate name for a new arrival in 1977, with Caperdonich meaning secret well, thanks to legislation prohibiting 2 distilleries operating under the same name. Caperdonich lives on in bottle and cask form currently, but its stills were also split between the Belgian Owl distillery and the when-is-it-going-to-open Falkirk distillery. 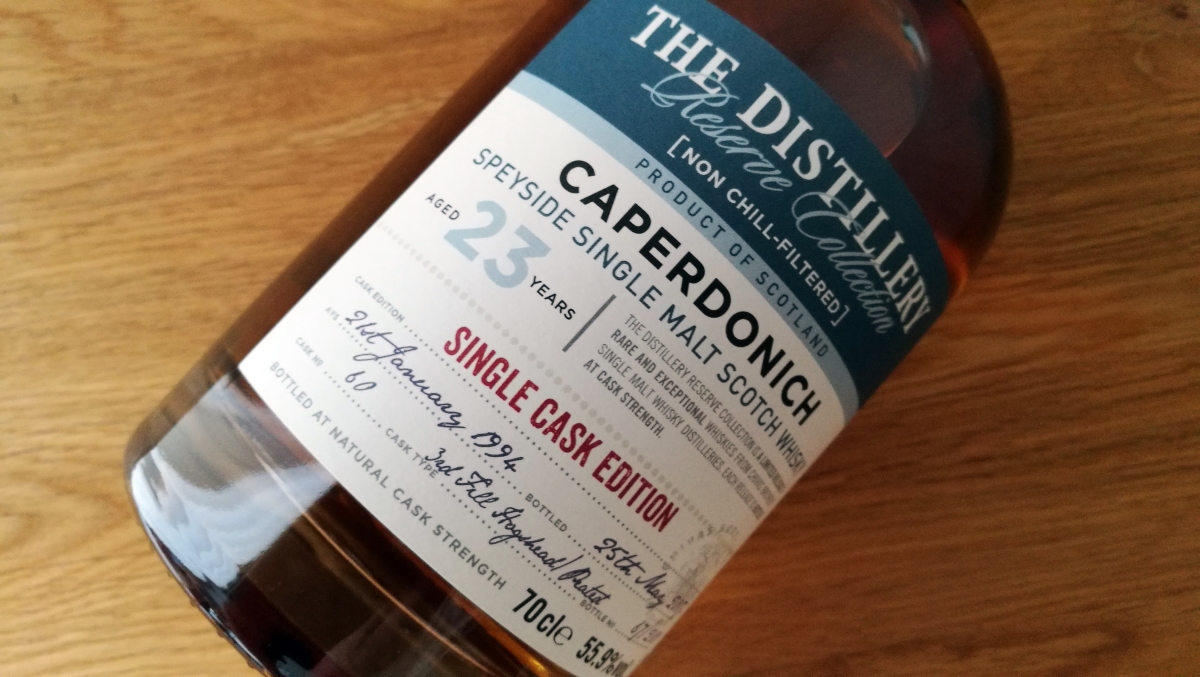 By chance I happened to be visiting Glen Garioch distillery over a July weekend, and had decided to loop back through Speyside. This afforded me the opportunity to drop by a couple of distilleries including Strathisla on the way back home. The picturesque distillery was relatively quiet, thanks to a local Highland Games that day. Sales of the Caperdonich had been brisk with a maximum of 2 per person being imposed. Overall this is a fair approach and rewarded those visiting the distillery or in the vicinity. Yes, I realise there are quite a few bottle flippers and investors present on Speyside and Aberdeenshire; I know because I’ve met some of them! Still, it gave everyone a reasonable timeframe to make his or her purchase rather than the online onslaught that means the Arran Exciseman bottling is gone in seconds. Not that I am interested in any whisky from the isle of Arran.

This didn’t stop my phone from pulsating when friends knew I was in the vicinity. Normally I’m willing to help out everyone when I can and their intensions are good. Yet I must admit I’ve become very frustrated with the whole speculator market. It’s preventing honest drinkers like myself from acquiring, opening and sharing certain bottles, then writing about them here for you. Some now seem inflicted by bottle fever, with pound signs flashing before their very eyes. Unable to miss out on a bottle or that quick profit, it leads to frenzied buying and hopefully madness. Take for instance will I get the incoming Cadenhead 40-year-old Littlemill? It’ll be a battle or an immense stroke of luck if I’m fortunate to receive a bottle whereas a few years ago it would have sat for a wee while. Things certainly have changed and not for the better. For the record my other Caperdonich will be for a future closed tasting as it has a surprising quality and I ignored any speculator requests.

Fuelling the Caperdonich fire was a holy trinity of features. Firstly, is the fact it’s an official bottling and this is a rarity in itself with the only previous official release coming in 2005 from Chivas as a 16-year-old expression. Secondly, is the price point of £130 for a 23-year-old closed distillery release. This is the bastion of Cadenheads so a welcome pricing strategy from Chivas given these crazy times we live in. Then rounding it off is the fact that this Caperdonich is heavily peated. Yep, this one is going back in time to when Speyside was peated thanks to the use of kilns and locally malted barley. We’ve seen a handful of peated Caperdonich’s previously in their teenage years as independent releases, but I’ve never had the fortune to experience one until now.

Colour: roasted coffee beans
On the nose: from the off its the peat, but its not a dense or pungent arrival. Rather it’s light and sweet with a sugary vibe. Beneath this camouflage harbours your classic Caperdonich characteristics with juicy apples, pears and a light honey. These have a barbecued element to them along with a smoked honey and a mint milk chocolate.
In the mouth: the nose sets you up for the peat which retains its gentle floral nature. The sweetness moves into more honey, grapefruit and candy floss, while milk chocolate, stewed apples, sweet cinnamon moves in with a light oily texture. A hint of menthol unfolds then more of those barbecued flavours arise with nuts and a slight chargrilled emphasis.

A dram if given to you blind, you’d never guess or even conceive it was a Caperdonich. In some respects it shows the potential of the mainland distilleries to reclaim their peat heritage. I quite enjoyed the Glenfiddich 125th bottling from a similar perspective, but this Caperdonich is more heavily peated and vibrant.

A rather excellent Caperdonich and lets not forget that this is an official bottling from the last custodians of the distillery. Pernod Ricard may have decided to close and not revive Caperdonich, but clearly they still have casks within their inventory and if they follow the standard set by this bottling then we’re in for a treat.