Two years already? It’s remarkable how time flies in the whisky realm and destinations so far off the map suddenly appear within touching distance. I can recall when Eden Mill was a renegade almost DIY brewery trying to make sense of beer and achieving local and then more widespread success. Since then the team moved into gin with remarkable timing, as this was prior gin boom and also kept their sights focused on the ultimate goal, which was whisky.

It was during the Edinburgh Christmas festival market a couple of years ago now that I stumbled across their new make spirits. Each wonderfully stating aged 0 years and giving the consumer the breakdown of the barley used. None of this Bruichladdich terroir guff, rather just basic information without the price tag or exuberant hey look at us antics. Time conquers all and we’ve been able step by step to follow the progression of a trio of specific Eden Mill mash bill for want of a better expression through their journey.

The fledgling 1-year-old range showed the dominance of wood in at least one of the expressions that was not promising. The mere suggestion of balance was sadly lacking, as were subtle flavours. The most appealing from my experience was the Hogmanay release that in reality sat midway between the other 2 new spirit projects. For the record this is a composite of Golden Promise Pale malt and Chocolate malt and even as a new make spirit offered an enjoyable texture and hint of what was to come. So a recent drive up to St Andrews, or more specifically Guardbridge, offered the opportunity to collect the next instalment of the Eden Mill journey.

The site is a former paper mill that can trace its origins back to the time of the Haigs and another distillery. Last time I checked the site was owned by the University of St. Andrews, who seem to just about own everything in this neck of the woods. Parking the car up amidst the traffic for the Women’s British Open, we walked around the site and stepped into the visitor centre area. 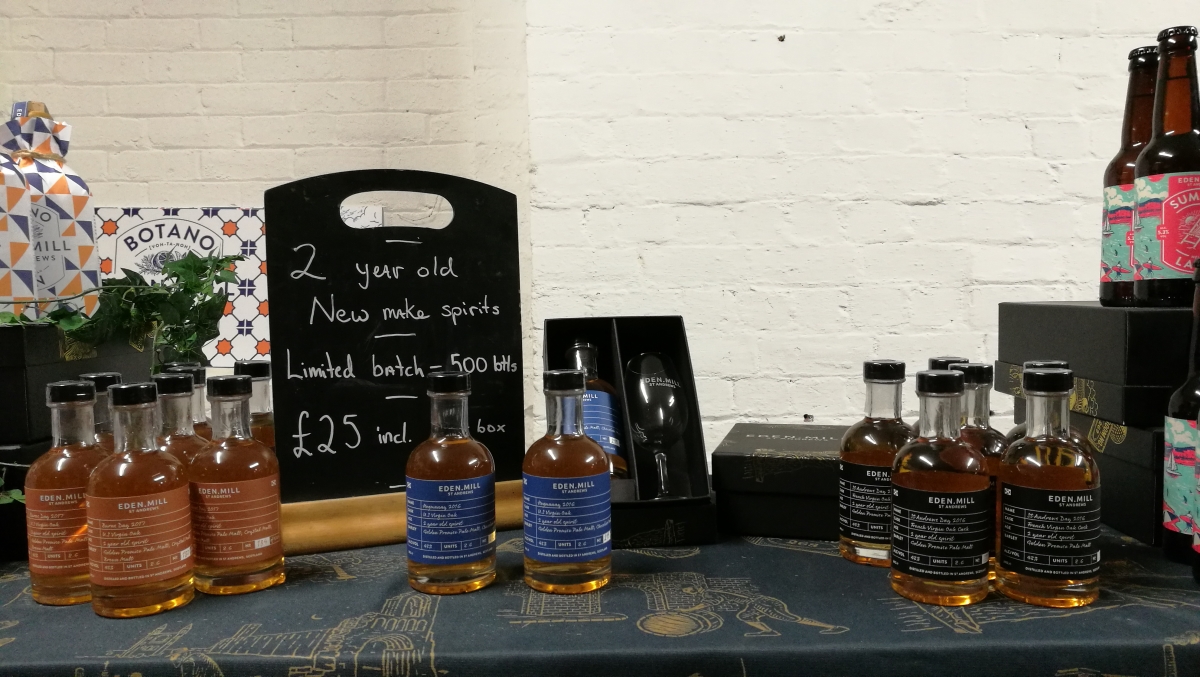 It’s a bustling environment, even on a Sunday morning. Gin, beer and whisky tours in full swing with various groups tasting the wide range of products. I’m a fan of the industrial environment they’ve tried to keep alive in this room and the shelves are packed full of choice. Avoiding temptation I picked up the Hogmanay release that retails for £25 and comes in a nifty branded box (good for future samples) along with a tasting glass and lid. I’d have rather had the option to purchase just the spirit as I have more glasses than your local branch of John Lewis, but it’s a decent package and will entice the gift seeking crowds that visit the distillery.

Now the pleasantries are over, we can move onto the 2-year-old spirit itself, bottled at 43% strength and I will eventually check out the remaining duo of this age. However before all that, in the coming week, we’ll have the Kingbarns spirit of the same age in an almost virtual Fife face off.

Colour: a gentle dried hay
On the nose:  a light juicy arrival with apple and some pears, then there’s aniseed and liquorice with a subtle vanilla undercurrent. Sultanas and a buttery marzipan linger.
In the mouth: poached pears with vanilla, some green apples and more of the buttery marzipan. At the back we have the liquorice again followed by all-spice with sweet cinnamon.

This shows promise and progression, whilst moving towards your classic Lowland presentation style. Yes, its not hugely layered or prolonged with its characteristics or finish, but we have to remember this is just 2-years-old and is showing enough character to keep me engaged and looking forward to the Eden Mill debut whisky.