On paper Strathisla has a great deal going for it without question. Frankly it’s been around since 1786, which is a very long time by any measurement and it possesses the classic postcard visuals that are only second to The Tormore. The missing part of the equation is sadly the most fundamental as an enthusiast i.e. the whisky.

My own experiences with the official range in particular have shown a rather light and in some cases a slightly, forgettable rough whisky. Unlike the distillery exterior, it’s far from memorable or of significance to keep you coming back for another bottle. Clearly, Strathisla should be capable of more and a couple of independent bottlings I’ve had over the years – mostly from the Scotch Malt Whisky Society – show potential after longer periods of maturation.

The key element of the problem I suspect is the current owner, Chivas Brothers, or Pernod Ricard if you prefer. They are very much brand, quantity and blend focus orientated. Across their sizeable array of distilleries there is a distinct lack of a single malt presence or the practical display of knowing how to create and build one. Yes, many distilleries within the group bottle now and again for distillery exclusives and generic ages, but there’s a catastrophic failure to look outside the blended market. Bottlings when they do appear are oddities and distilleries are run very efficiently, and my recent tour of Glen Keith suggested that quantity is the main focus. Even when Chivas does try to turn the spotlight on the producers to the Regal range with the recent launch of the Ultis, it’s all about the final blended malt as opposed to each individual distillery.

Chivas of course have been in the news recently for agreeing to sell one of its lesser known distilleries, Glenallachie, to a consortium led by Billy Walker. In total soulless corporate speak, it highlighted this deal allowed Chivas to focus on its priority spirits and to adjust its industrial footprint to its needs. This underlined the general issue in my eyes to the whole Chivas distillery stable. Distilleries are commodities, programmed to produce a certain style and adopt a uniform existence without hope of freedom or expression.

A recent tour of the Chivas owned Tormore – arguably their most prized distillery – highlighted the short-sighted nature of headquarters. When an employee was quizzed about why the official Tormore range only consists of a 14 and 16-year-old expression, which seems odd given their proximity, there was a shrug of the shoulders and the simple answer was marketing. It says something when marketing and not those who truly know a distillery, its whisky and fulfilling its potential now make decisions. I’m sure this isn’t the only similar set up within the industry, but when consumers feel let down and query why core official ranges aren’t delivering more than someone has to take notice?

All of this takes us back to Strathisla distillery that I happened to visit in July of this year. It was just a fleeting visit when passing through Keith, to assess what was available and the bottle-your-own option. At times I expect Chivas believes the exterior of Strathisla will lull visitors into some whisky romanticism and a considerable spent within the distillery shop. This time around I was able to take in the range of cask strength releases that are appearing and generally are very reasonably priced. The 15-year-old Tormore for instance is only £43 (for 50cl) and is the best official example currently available, whilst the Glen Keith bottling when down well with our group last time.

For my criticism of Chivas in this article, their pricing strategy remains fair and refreshing as shown by the delightful 23-year-old Caperdonich that hit the shelves at a very reasonable £130. Whilst at the distillery, I was able to purchase a new cask strength release from Strathisla, matured exclusively in a 1st fill sherry butt. It gives us the opportunity to compare 2 similar ages with different casks. Priced at £70, I felt it was a reasonable price once again and commendable. 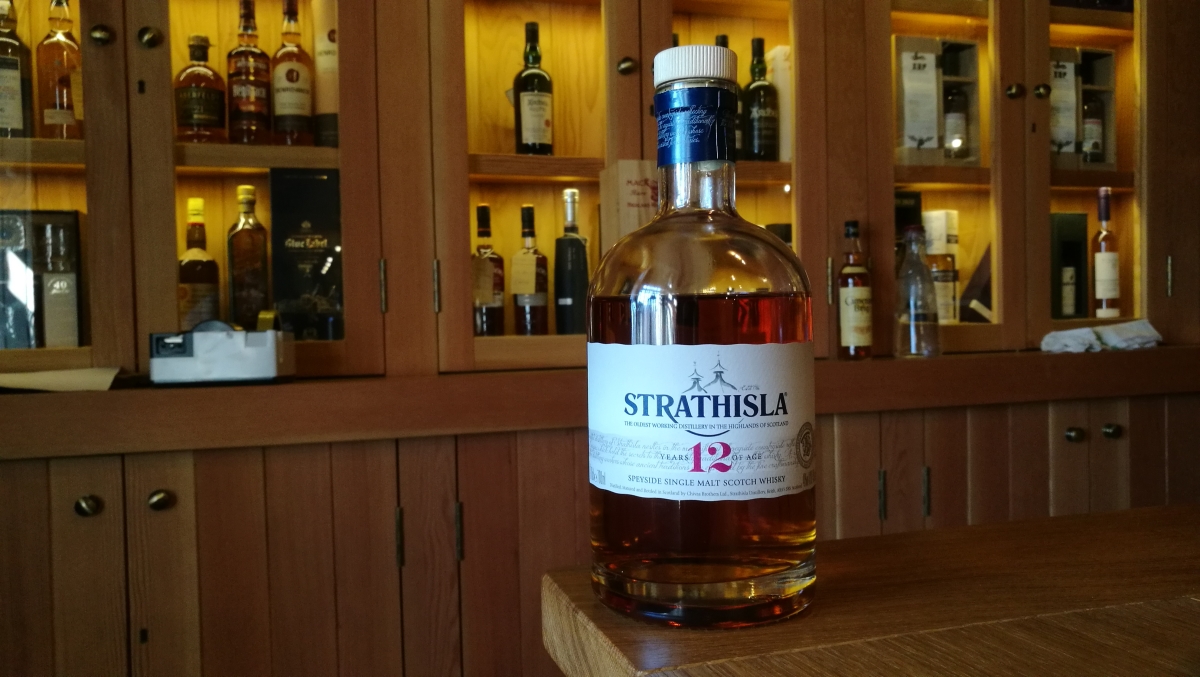 Bottled at 40% strength, this core release will set you back around £33. This features artificial colouring, chill-filtration and thanks to Michael for the sample.

Colour: a light flapjack
On the nose: a gentle array of apples, toffee and all-spice with milk chocolate and a floral note. With the addition of water pears arise along with cinnamon, apricots, tablet and a refreshing vanilla.
In the mouth: light and classic Speyside with vanilla, caramel and more of the all-spice. Water produces dough, pears, cinnamon and a malty presence.

Better than the taller previous bottling, this one is more polished and refined. Still, not hugely detailed or epic in nature. I can see this whisky finding favour with those new to whisky, or who prefer a Speyside apparel, or a no-thrills experience. 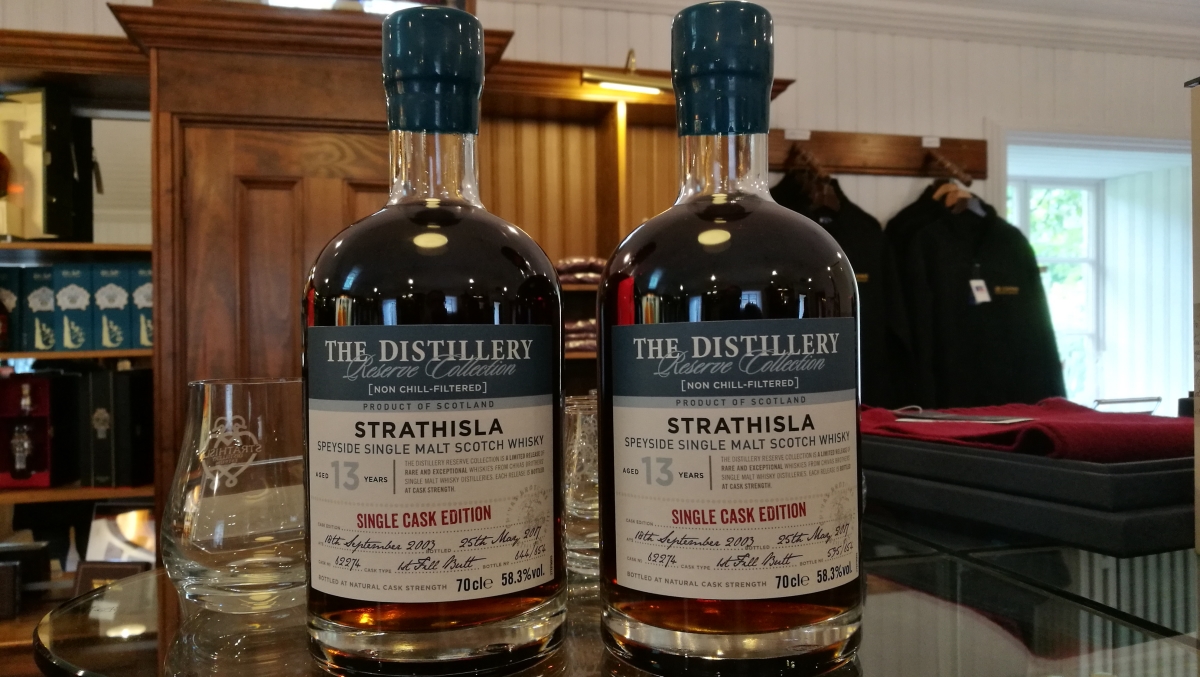 Part of the Distillery Reserve Collection, this was distilled on 18th September 2003 and bottled 25th May 2017. From cask number 62274, a 1st fill sherry butt, resulting in 654 bottles at 58.3% strength and non chill-filtered. Available at Strathisla distillery for £70.
Colour: a red tinted treacle
On the nose: a rich arrival with cola cubes, milk chocolate digestive biscuits and raisins. There’s a slight hint of rubber but that’s a good feature in my book. and cinnamon More treacle and leathery qualities with a layer of beeswax for good measure. An assortment of macadamia and Brazil nuts freshly cracked open, a touch of alcohol on the fringes and some pepper. Water I felt here didn’t deliver much else.
In the mouth: amazingly not as dominant as the nose suggests even for a 1st fill. There is a lovely harmony at first with honey and treacle and the power of the cask beings to insert its presence towards the end of the experience moving into a resin caramel finish. Prior to that more of those cola flavours, a strong sense of vanilla, blackcurrant jam, figs and a touch of dryness.  Water brings out a rolled tobacco quality and a rich dark chocolate.

A very good enjoyable and well priced Strathisla. Although it begs the question why we don’t see more of this officially? Clearly the distillery is capable of greater things than what we associate with the core range as it stands today. Come on Chivas, live a little and unleash some new Strathisla single malts.