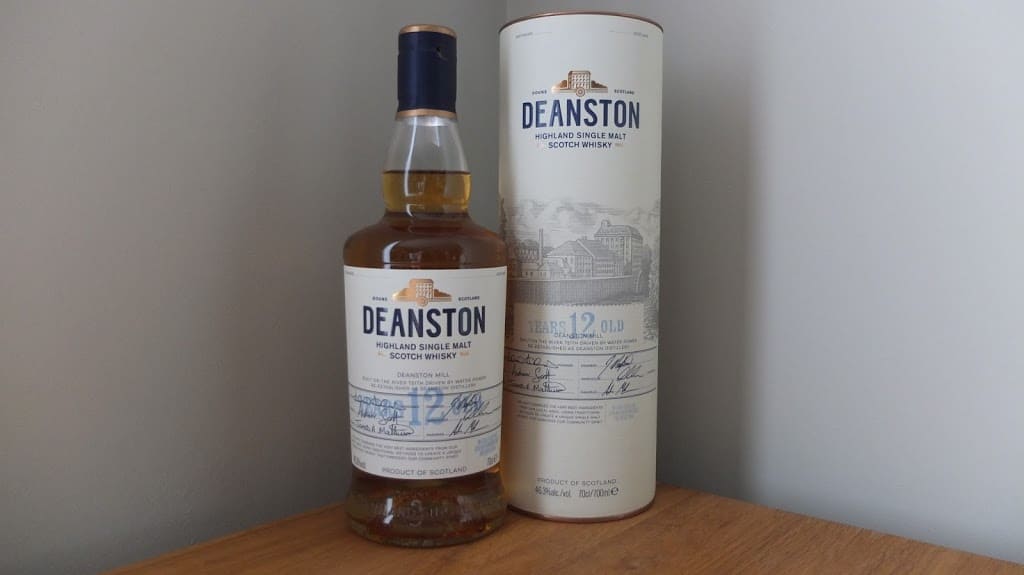 Finally, everyone seems to be catching up with Deanston including Serge, who was recently impressed. I’ve lost count of the enjoyable whiskies I’ve experienced from this distillery in past couple of years. Yes, its proximity to my own home does allow me to make a convenient journey and check out the latest distillery exclusives. This is where the magic was truly residing with memories of departed bottles such as the Deanston Toasted Oak remaining vivid.

Since being acquired a couple of years ago by South African giant Distell, they’ve brought a much-needed level of investment to the trio of distilleries in Scotland. Tobermory is currently closed for refurbishment, Bunnahabhain recently announced a substantial investment for Islay and Deanston continues to grow in popularity. The future looks promising and the distillery team has already achieved the most difficult aspect in creating an enjoyable whisky. Now it’s all about getting the bottles out there and spreading the word.

Amongst several enthusiasts, the mere mention of Deanston would have some reciting their Axis of Evil list. Distilleries go through rough times or have to produce what is demanded by their owners. For some this is mere blending fodder or just quantity, or even a lack of patience during maturation. Deanston for many years produced whisky and did not cultivate or really have the confidence to step up, or it seemed that way to onlookers. However, since the turn of the millennium the curve has been positive and rapid, one full of commitment and hard endeavour. For us mere enthusiasts we’re now enjoying the fruits of such labour.

Pausing for just a moment, we all have our preconceptions when it comes to whisky. Jura has several running for the hills and Highland Park is letting standards slip with its Valkyrie release. Yet such experiences won’t stop me from trying further expressions or seeking out ones that really deliver what I’d hope to experience from a distillery. There has been a good Jura with the 30 year old Cadenheads released in 2016. A joyous release it was worth celebrating and then questioning why is the official range so poor in comparison? The point being, that things in whisky change and a distillery that you once wrote off or dismissed without a second thought, could now be a totally different proposition. It pays to keep tabs on current expressions which is easier said than done with the onslaught of releases.

Many tend to forget that Deanston was one of the first distilleries to transform their range with the core features we hope to see nowadays. We’re talking about natural colour, non-chill filtered and a level of strength that encourages more flavour i.e. in their case 46.3%. Back then, these were brave decisions, but time has validated the approach and then everyone else cottons on.

The road is long to establish a brand in the mind of consumers. Deanston to many will be an unknown quantity or a lesser malt from previous decades. However it shouldn’t be dismissed out of hand. Part of its transformation comes with the visual revamp of the core range and this 12-year-old hit the shelves in its new clothing towards the end of 2016. Yes, it’s taken me that long to get around to reviewing it; take a look at the main page and you’ll see how busy this place is! 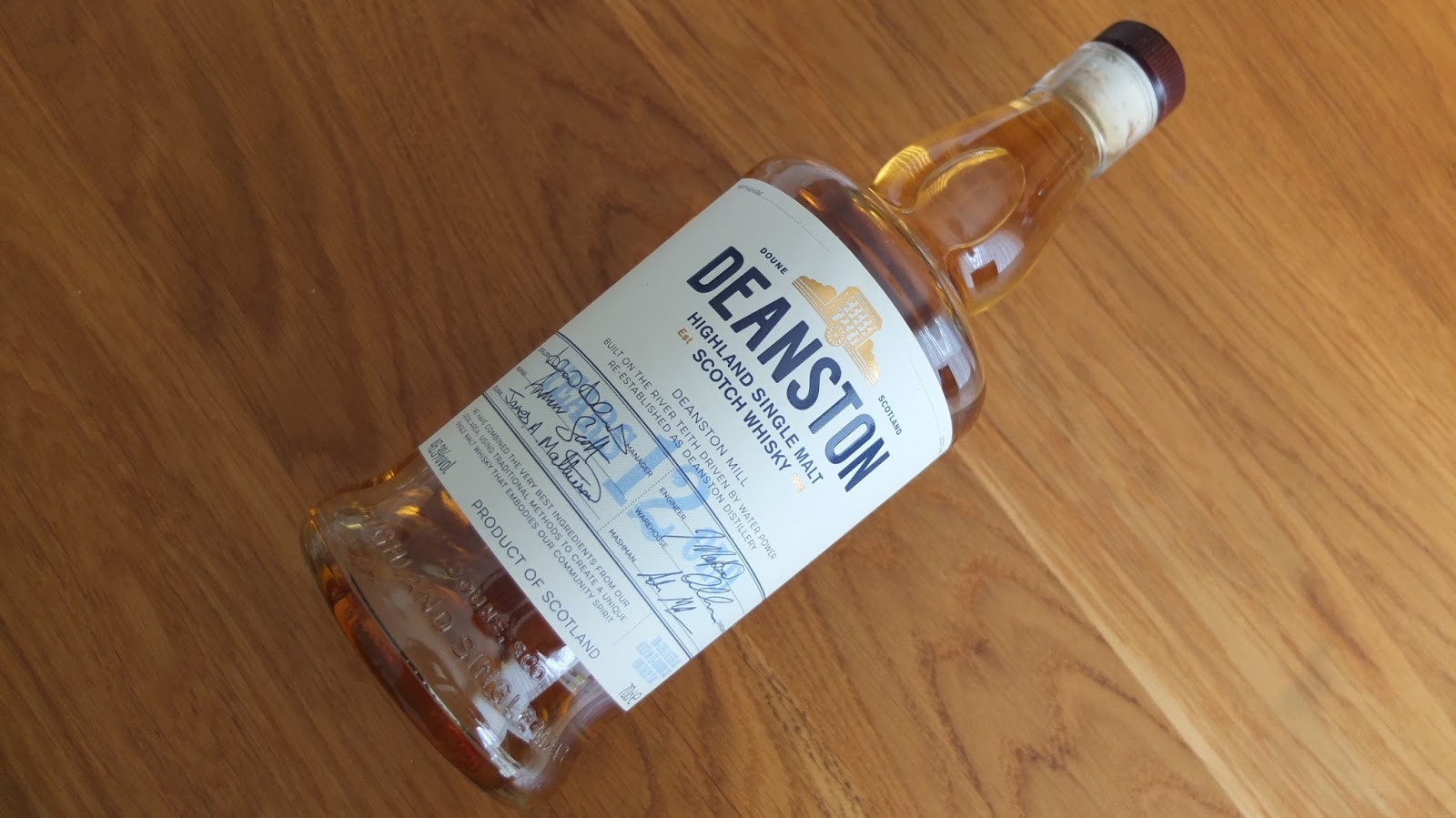 The new packaging highlights its growing confidence. There’s also an underlining of the hands on traditional ethic. I cannot recall the last time I picked up a bottle with the signatures of the mashman, stillman, distillery manager etc. all prominently on the front together. If you’ve visited the distillery then you may have seen the staff pictures that adorn the walls and underline the team spirit and history that Deanston holds dear. Overall it’s a prominent revamp and a step up that should encourage others to explore the range.

This 12 year old will set you back around £35-£40 and this seems a fair price nowadays for such an age statement. This release is likely to be your initial destination or the Virgin Oak, if discovering Deanston for the first time. It has been a while since I sat down with the 12 and upon my last visit to the distillery I purchased a bottle to explore. Then this weekend consulting my sample mountain revealed that I also have the current distillery exclusive that comes from a brandy cask. Both should make for an interesting comparison with the widely available standard expression and the more experimental visitor experience.

Nose: more of the honey but matched with a gentle sweet cinnamon, a malty vibe and a twist of orange. There’s shortbread and a touch of ginger, some hops and raisins. With water, a maple sweetness is revealed and cream soda before the vanilla comes through more strongly.

Taste: a vanilla cream is my first impression, then oat biscuits with an array of nuts. Beyond there’s chocolate, more malty flavours and a sugary sweetness with caramel and apples. On the finish a hint of cinnamon before the addition of water delivers fudge and marzipan.

Overall: an excellent 12 year old, I’d actually forgotten how tasty it is. A well balanced nose and just enough detail on the palate to prompt you to pour another. You really cannot go wrong with this release.

Nose: very nutty arrival and spicy with all-spice, cloves and ginger. There’s a decadent honeycomb combined with walnuts and brass rubbings. A touch of ginger, a rich caramel and brown sugar.

Taste: gentle arrival lacking the malty or common characteristics of your traditional Deanston’s. Instead there’s a dark chocolate bitterness with a long sugary progression and cloves. Some butter cream with a emphasis on caramel towards the finish and dare I say peanut butter? Water brings out more brown sugar and resin-like qualities.

Overall: a very interesting comparison to the stable 12 expression. It highlights the power of the cask in the maturation process. This being bottled at 53% volume is very drinkable without water.  An interesting cask experiment albeit far from the best distillery exclusive I’ve tried from Deanston. It may grow on me when I purchase a bottle.

In summary, then, you cannot go wrong with the 12-year-old and it’s well worth seeking out. With many distilleries hiking up prices and withdrawing age statements you have to look around nowadays for quality and value. In the 12 year old you have the best of both worlds.