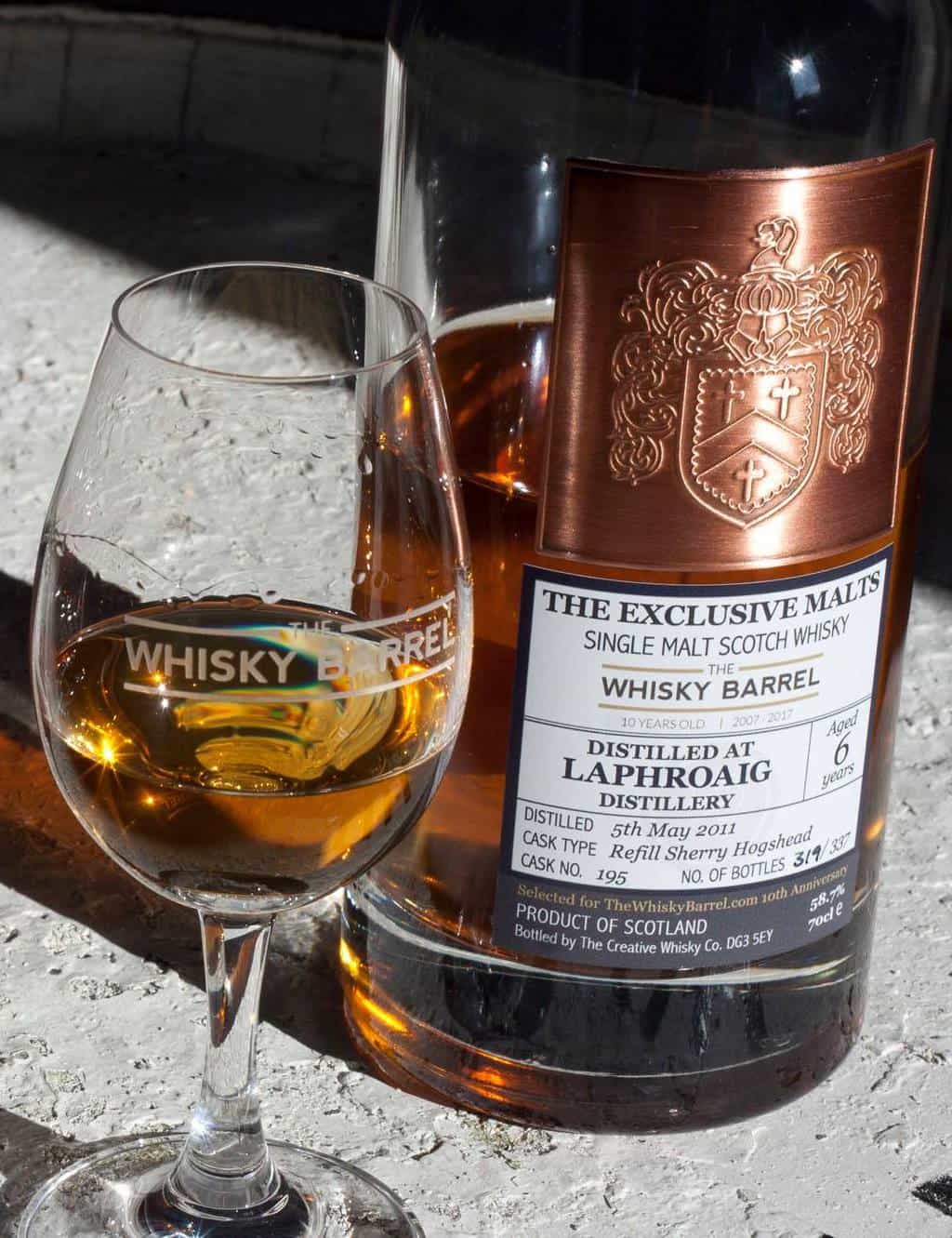 We like The Whisky Barrel here at Malt. An excellent retailer and I recently enjoyed two of their bottlings, a Cooley 13 Year Old and a Dumbarton 1987.

And we used to like Laphroaig, too, but this distillery has proven to be on a downward trajectory for the past couple of years, with terrible releases like the Laphroaig Lore indicating that they value their marketing over putting out flavoursome whiskies – which is enough to please shareholders and maybe new drinkers, but not especially long-term whisky fans who remember just how good Laphroaig used to be.

So I didn’t fully know what to expect when a very young Laphroaig – a mere 6 years old – landed on the doormat. In fact, it also landed on Jason’s doormat too, so we decided to combine our separate tasting notes and give you a two-for-one review. And then Phil bought a bottle! So why not give you a three-for-one review.

This Laphroaig is a collaboration between The Whisky Barrel and the Creative Whisky Co, which has proven to be the real top-value bottler over the past year. Excellent whiskies at old-school prices, for the most part. (I particularly enjoyed this Caol Ila.)

Anyway, the bottle itself is a Laphroaig 6 Year Old, 2011 vintage. It’s a single cask, which has come from a refill sherry hogshead (as opposed to first-fill).  Bottled in August 2017, by The Creative Whisky Co for the Exclusive Malts series, this has been selected for the 10th Anniversary of The Whisky Barrel. It will set you back just under £50. 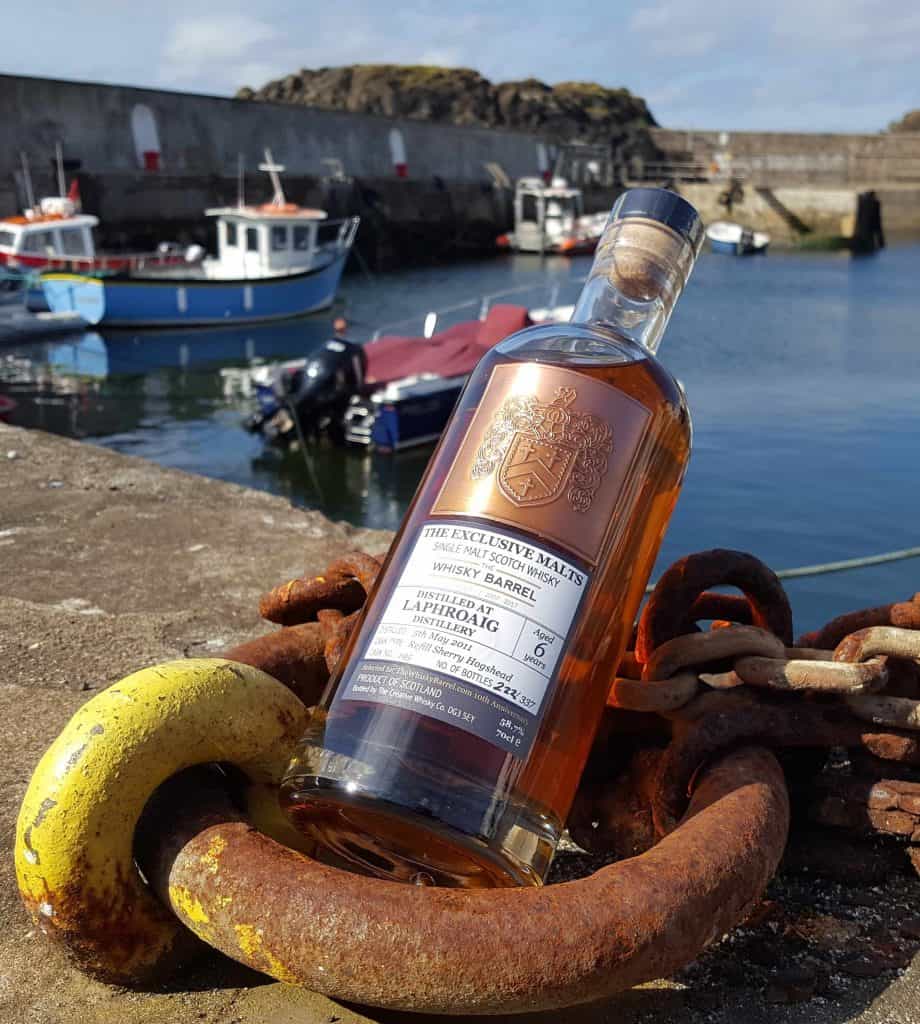 On the nose: an aggressive, prickly peat, but the sweetness is lovely. Sundried tomatoes. Cranberries. Certainly lots of red fruits – raspberry jam. Once the fruit fades there’s a nice nutty creaminess, almost like a Danish Blue cheese. Then hints of that old-school Laphroaig medicinal, iodine note. Hemp. Black tea.

In the mouth: prickly, though silky. Quite a peppery, briny and tannic start, with burnt meat covered in BBQ sauce. Fruit is there underneath, and with time in the glass, it shows a lot more: tart redcurrants, dried apricots, with tomato ketchup. And curiously meaty for a Laphroaig: smoked salmon, kippers. Stem ginger in syrup on the finish.

On the nose: a coastal bonfire is the immediate impression. Smoke billowing out across the dunes followed by freshly done popcorn and a sense of roasted red peppers. Almonds and raspberries are subtle touches confirming the spirit has overcome the cask itself. With the addition of water things change, firstly there’s more nutty aspects and a slight citrus aspect with oranges and a gorse bush.

In the mouth: now you can tell the cask has had an influence here as the spirit is less rampaging and more restrained, with a nice texture on the palate. The salty smoke, brine and bacon influences are still here. It’s a noticeable savoury dram with pork scratchings and beef stock that ends with a really long ready salted crisp finish. Adding water has less of an impact than on the nose arguably hinting at its youthfulness. It does bring out more salty aspects and a waxy note I wasn’t expecting.

Nose: Quite a sweet nose, the sherry cask influence very apparent hitting you with sultanas & frangipane, new leather in there too. This leads onto sea salt, some coal tar and sweet peat reek which develops into maple cure bacon. With water there is a hint of orchard fruit, definitely pears surprisingly…french praline, a hint of dulce and lapsang souchong tea.

In the mouth: For a cask strength Laphroaig it is surprisingly gentle but has a nice thick, oily mouthfeel. Immediately sweet sherry hits the palate, fruit and nut milk chocolate, hints of coffee with some pepper spice & heat before breaking into smouldering peat embers with the usual medicinal overtones. With water it opens up a little more & seems to sweeten – salted maple syrup, brazil nuts, definite coffee notes, cask char, peat & tobacco ash. The finish is lingering peat, brine and a warming coffee cake note.

Mark: Indie bottlers tend to do Laphroaig better than the distillery itself, which proves a constant disappointment, and this continues the trend admirably. It’s young, but there are plenty of flavours. Not as good as the previous two releases for The Whisky Barrel’s 10th Anniversary, which were really excellent value whiskies. But this remains a solid release and I think peat freaks will find a lot to enjoy in it.

Jason: It’s young and yes it does have limitations, but at 6 years old and a decent price – it’s another winner. I’ve had a handful of independent Laphroaig youngsters in 2017 and, with the odd exception, they feel more natural and alive than the majority of the official releases.

Phil: I cannot like some on this site claim to have tried any Laphroaig pre-1980’s when the still size was increased so I can only base my views on the modern peat monster that is Laphroaig today. I think the Whisky Barrel and The Creative Whisky Company have bottled a clinker of a whisky with this one. The full sherry maturation has definitely tamed the spirit slightly, which means this whisky is not just all about the peat roar usually expected from a Laphroaig. It has plenty going on with a good balance between the nose and palate and also a great interplay between the sweet and savoury notes. It actually reminds me of Ardbeg Uigedail, which can be no bad thing! 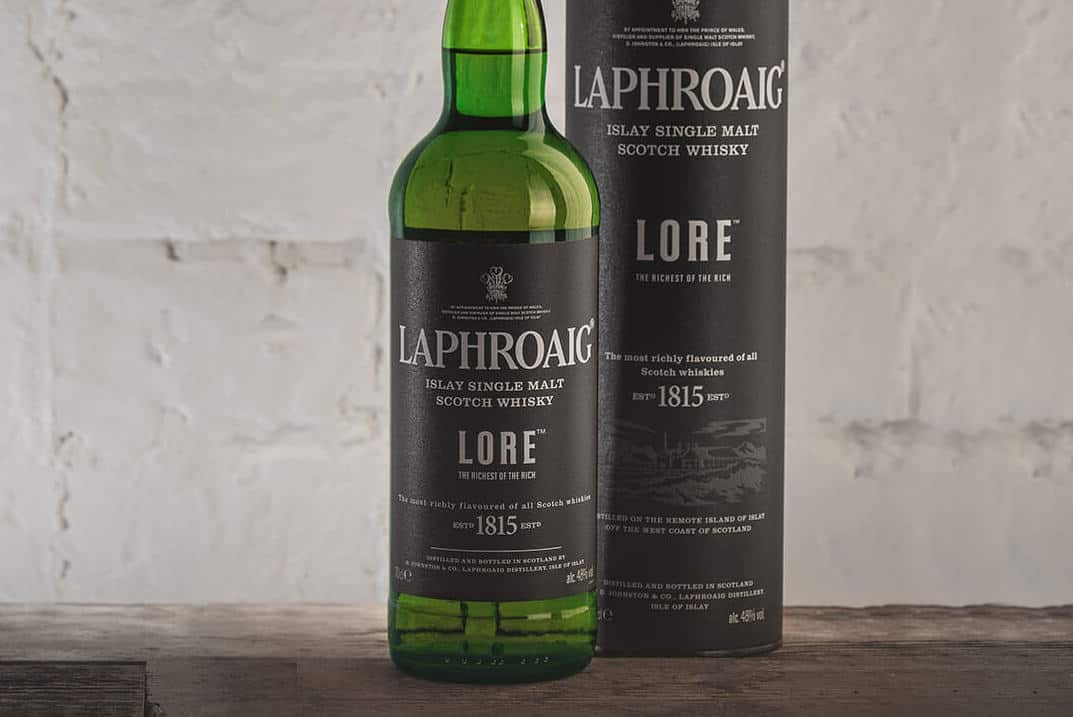