In whisky, as in so many things throughout life, you only appreciate what you once had when it is no longer in existence. This is especially true of Caperdonich distillery, formerly of Speyside and so maligned that started life as simply Glen Grant number 2 and spent much of its life in a state of suspended animation.

For over 6 decades Caperdonich sat idle whilst the whisky world moved on until 1965 when it was revived and given the vital support to flourish. Expanded, refurbished and renamed thanks to legislation changes, Caperdonich was making an effort to support its master’s blends with the occasional cask slipping into the independent sphere. In 2001, production was scaled back and the soap opera of its future unfolded ensued with its sale in 2002, it became clear over time that there was no way back. Now, as casks are bottled we see the distillery in a new light. Chivas as the last owners and custodians of distillery has already opened up a cask and more I’m sure will follow. On occasion, I wonder if these former owners who sharpened the axe and delivered the final blow regret their decision beyond what management accounts suggested?

Throughout my own whisky education, I’ve been particularly fortunate to experience whiskies from the ranks of several closed distilleries. It’s an intoxicating mix of old styles of production, expensive price tags and a taste of liquid history. For many of these distilleries, it’s their story and enduring legacy in bottle form that I find captivating. In 2017, there are been several new Caperdonich releases to acquire and enjoy. Chivas released a delightful heavily peated variant from a single cask that promptly sold out, then Cadenheads unleashed the refined sherry monster from 1977, after spending a mighty 39 years in the cask.

Funnily enough, it’s been the unseen efforts of Caperdonich that we’ve experienced this year. From peated spirit to sherry beasts, these are not normal vessels for the fruity distillery character that truly sings when united with an ex-bourbon cask.

A particular revelation was a release from a couple of years ago via the Whisky Broker that had sat opened for a couple of years. A fairly high fill level sat in ideal storage conditions; it’s a dram that I visited on the rare occasion. Patience displayed the benefits with the removal of its peppery character that gave way to the aforementioned fruits. Time by accident produced a memorable whisky that went down extremely well with everyone I shared its contents with.

In fact, Cadenhead’s has been the source of several Caperdonich’s in recent times. I recall a very pleasing bottle summed from the depths of a Campbeltown warehouse, specially selected by the organ grinder Mark Watt, for a special tasting finale. The fact that this unfashionable lost Speyside distillery is his favourite might not be news to you, but it does ensure that the independent bottler remains a constant source of releases.

A case in point is this Cadenhead Caperdonich bottled at 35 years, after being distilled in 1977 and spending its slumber in a sherry butt. Bottled at 50.2% the outturn was an impressive 384 bottles and needless to say it sold out pretty promptly upon release. On pure visuals alone this doesn’t seem to be the same type of beast that the 39-year-old revealed itself to be, however, there’s only one way to find out. My thanks go out once again to WhiskyLifestyle for the opportunity to try this whisky. 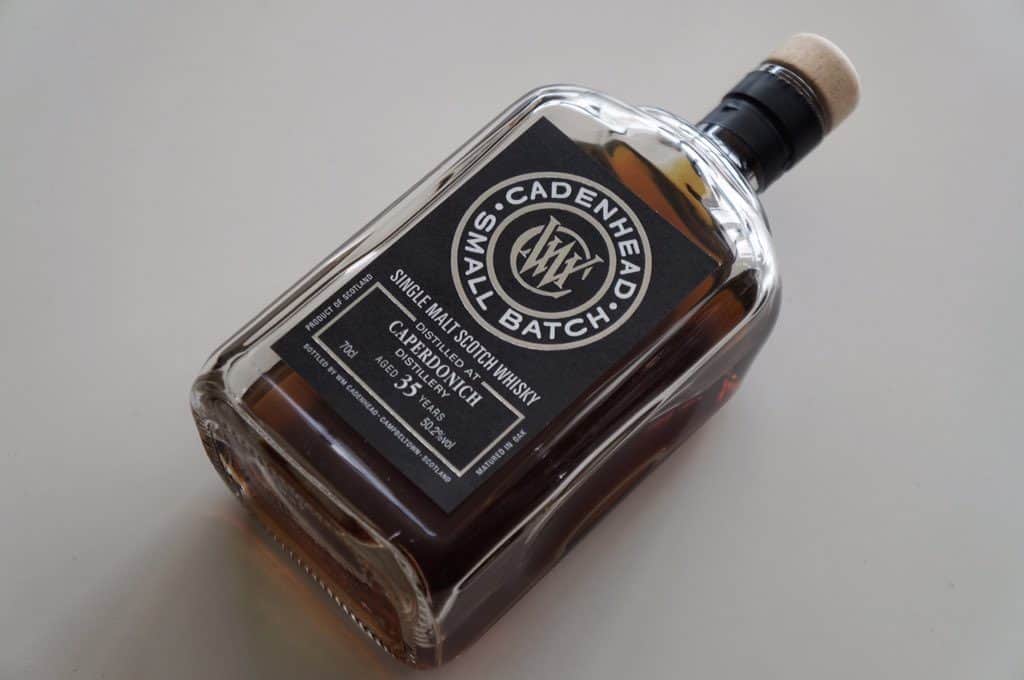 On the nose: those familiar sherry themed notes of raisins, leather and walnuts. Present and correct, but not ferocious as they were on the aforementioned dram. There’s a noticeable vegetative and herbal aspect with basil, beetroot with its earthy qualities and all-spice. A touch of treacle, brown sugar, macerated cherries and bitter dark chocolate follow. Water forces some apple peel to the surface, cranberries, beeswax and a musty attic quality.

In the mouth: it’s less sherry-dominant upon first impressions with an initial flurry of Speyside fruits but then it turns and the dryness of the cask takes a firm grip on the brown sugar finish. Returning its memories of a rum chocolate truffle moving into a blackcurrant jam. Time for water. More fruit salad with the cask taking a step back, a touch of ginger and maple syrup coming through.

An active cask has had its fun with this Caperdonich. It’s a very good whisky but the distillery character has been lost along the way. Indeed, this could be from one of several Speyside distilleries and its true potential has not been harnessed.