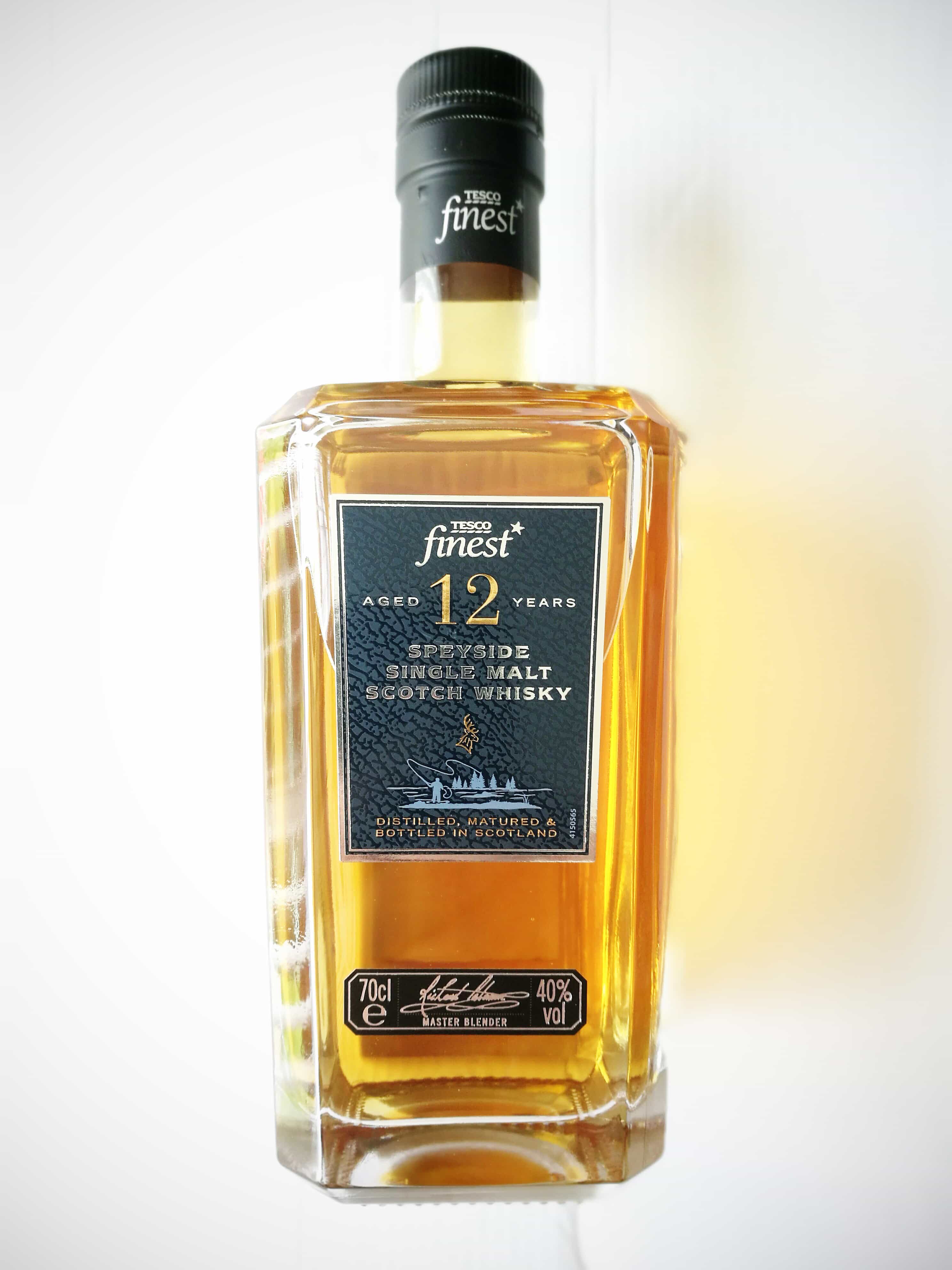 Yes, I see you. Standing in the aisle, gazing at the assortment of whiskies that reach out from ground level to just above that height where you have to stretch out uncomfortably.

It’s a fine sight – the whiskies, not you – full of discounts, lavish tasting notes and scintillating designs. It’s easy to make a choice, but how do you know it’s the right one? Congratulations for reaching out via the internet and landing here at Malt. You’re intrigued about the Tesco Finest Speyside Single Malt 12 year old? The bottle is a nice shape and the labelling is a little restrained, but the most important factors capturing your attention are the proudly stated age and the fact that it’s only £25.

For a single malt with an age statement that’s a good start. It’s possibly the cheapest exponent on the shelf that is happy to tell you how old it is. Except the Jura 10 year old, but let’s not go there. This is meant to be a present, a gift, a thank you and not a weapon that destroys the palate and spoils a friendship forever. That’s what the Jura achieves so if you don’t like your boss or neighbour, buy the Jura.

The Tesco Finest range is meant to be the pinnacle of what this massive UK supermarket chain can offer customers within its walls of retail heaven. Whether it’s from a joint of beef, a readymade meal or a cheesecake, the Finest label means something.

Tesco Finest is a benchmark of quality. It has for the past couple of years reached into whisky offering examples of Speyside and Highland regional single malts. Both have been crafted by Master Blender, Richard Paterson, who is responsible for the Dalmore, Whyte & Mackay and other whiskies including yes, the Jura. Normally those responsible for putting together exclusives for supermarkets are not named, but here the Tesco Finest range offers that touch of class, luxury and tan with the mention of Paterson, who is more widely known as the nose. He’s happy to be named on the back label and has also signed the front – not personally – but it is a nice touch, and explains why the packaging is so minimalist.

Let’s cut to the chase and the details. This is a single malt, which means it only contains 100% of whiskies from a single distillery. There is no grain whisky, which would turn this into a blend, and 12 years will be the minimum age of the youngest whisky in the bottle. Given the involvement of Richard Paterson, it is a fair assumption that the distillery responsible comes under his remit. It’s also from the famous Speyside region in Scotland, which is home to more distilleries than any other. Whyte & Mackay also own the Fettercairn and Tamnavulin distilleries – if we add these to the list and subtract the regions other than Speyside – we’re left with Tamnavulin. This would be a reasonable guess as to the origins of the whisky you’re currently looking at, with Dalmore being a Highland style whisky along with Fettercairn, and Jura? Let’s not go there. Tamnavulin is more of a distillery workhorse that exists to supply content for the blending requirements of its owners. Established in 1966, it has gone about its work in a quiet fashion, without much fanfare or attraction. This doesn’t mean to say that the whisky is substandard – far from in fact – with other Speyside distilleries such as the Tormore capable of greatness when they do appear at retail.

This Tesco Finest 12 year old is bottled at 40% ABV, which is the minimum allowed to be called a whisky, and makes no statements about natural colouring or non-chill filtration. These are requirements from geeky whisky types, but at this price point, they are not widely seen.

It is likely that this whisky has been filtered to keep its visual consistency in the glass and it’ll feature more fake tan than Argyle Street in Glasgow. Richard likes a bit of colour in his whisky after all.

We’re about to head into the review now where Malt gives you an opinion on what this whisky smells and tastes like. We’ve even recently started putting scores into our reviews so you can swipe down past all this gibberish and get a quick verdict. Ready? Ok, let’s go!

On the nose: initially its very woody with vanilla and tannins – it needs a bit of patience to reveals some shy apple characteristics. Soon the harshness from the wood and the feeling of cardboard gives way to a gentle caramel, a rather dry cinnamon and a touch of nutmeg. Returning, there’s a varnish aspect, black pepper and some dried fruit. The addition of water brings about a lightness and relaxation. Unfortunately little else, yes there’s more of the apple and a gentle black tea characteristic but little else.

In the mouth: milk chocolate interlaced with more of the vanilla and a dry finish with black pepper. Again returning, salted peanuts and a dried orange peel followed by more cardboard. Water doesn’t move the earth in any respect. The finish becomes more gentle, a touch of cinnamon but you’re left wondering where the flavours are?

I’ve gone back to this whisky several times to find the key or hidden feature to a treasure room of character. Sadly, this has been without success and you’re left with a whisky that just feels, well, mundane and lacking any vibrancy. Considering the overall experience, I believe the quality of the casks are to blame here and age doesn’t necessarily mean quality. Is this a great whisky? No, far from it. Is this a substandard whisky? Again, no.

It just exists and doesn’t offer or inspire, which in my book is perhaps the greatest crime. For £25 it is fair enough, but I’d actually point you towards Aldi’s Glen Marnoch Speyside whisky offering which comes without an age statement and retails for under £20. It’s a superior whisky and cheaper, making it worth your while to put down that bottle. Leave Tesco’s and head over to purchase that bottle gift.

Living in Scotland I’m fortunate to have access to the widespread range of local produce. While this includes some of the finest fish, lamb and..