The first thing to point out about this visit to Pulteney is that it was an all-expenses-paid press trip. I’m not pointing this out under some illusion of self-importance; more for reasons of honesty, transparency and everything else that Malt stands for. Nonetheless, it was a great trip even despite my lame performance on the coastal boat tour – or ‘vomit comet’ as it shall be known henceforth. It was fantastic to meet everyone and discover more about Old Pulteney itself.

After meeting the rest of the group in Inverness we took the long, but beautifully scenic, drive up to Wick where we met Lukasz, the Brand Ambassador, and headed for dinner at the Bord de L’eau restaurant. The last time I was in Wick was a couple of years ago and dinner for me, then, was at the local Wetherspoons. The woman at the table next to us was complaining about the fish and chips. Apparently, the fish was still frozen. Or alive. I can’t quite remember which. No such issues at Bord de L’eau thankfully; the crab salad and the lamb which I ordered were absolutely delicious. 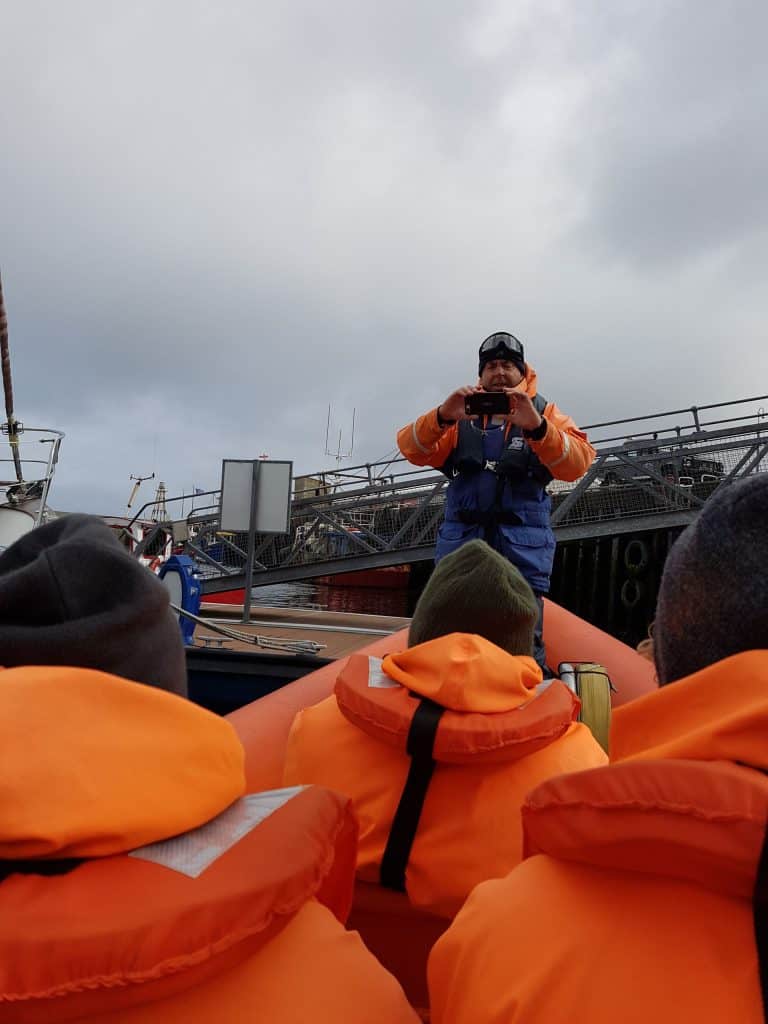 Taking place the following morning was the all-important visit to the distillery, followed by a RHIB ride, taking in the stunning coastline around Wick, and a visit to the Heritage Museum in the afternoon. Therefore, our overnight stay was at the nearby Natural Retreats accommodation, in a very cold, wet and windy John O’Groats.

Thankfully, Lukasz had brought a plentiful supply of Old Pulteney 12 and 17 to keep us warm. As the 17 years is now being discontinued, I felt it was only right to partake. However, I genuinely don’t think you can go wrong with the 12 years. For me, it’s at the right age to show off all the spirit’s underlying characteristics and I personally prefer it to the 17.

Distilleries face, and have always faced, challenges. One of the biggest must be finding itself in the middle of a ‘dry town’. Between 1922 and 1947, alcohol licences were banned in the town of Wick. Put simply, this was primarily due to the fishermen’s wives getting narked at their husbands for getting banjaxed, spending all their wages on booze and leaving them very little, if any, money for food. So when the Temperance Movement campaigned for a change in the town’s law, the women (those over 30 having been given the vote in 1918) voted in favour. Admittedly, not great for a distillery. Together with Prohibition in the States, this led to Pulteney being mothballed from 1930 until 1951. 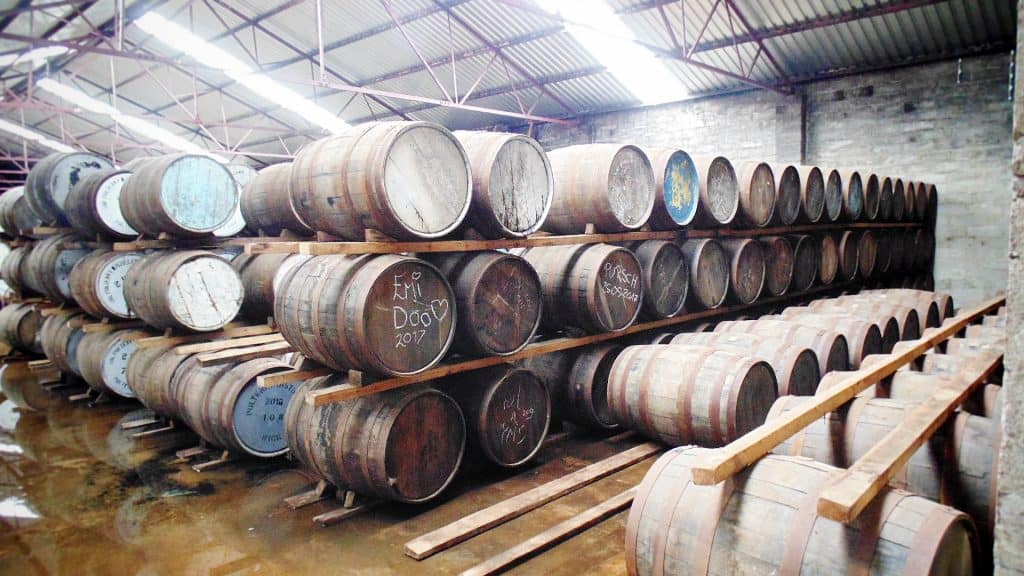 Since then, it’s passed through the hands of Hiram Walker (1955), Allied Breweries (later Allied Domecq) in 1961 until the current owners, Inver House Distillers bought the distillery in 1995. Today the distillery, like most others, continues to face challenges, albeit different ones. Its location, as well as helping to shape the character of its whisky, is one of its main obstacles. Taking a tour around the distillery, with Malcolm Waring, the distillery manager, a random washback in the stillroom is the only sign of an attempt at expansion. It’s obvious that the lack of space is the main constraint to this; there’s physically nowhere to go. Although increasing production over seven days, rather than the current five, could be an option, Malcolm explained that there were no plans to do this. Instead, the onus was on constantly striving to increase quality rather than quantity, with investment in six new washbacks and a willingness to experiment with different types of barley (with Chronicle, however, providing less of a yield than Optic) as examples of this. 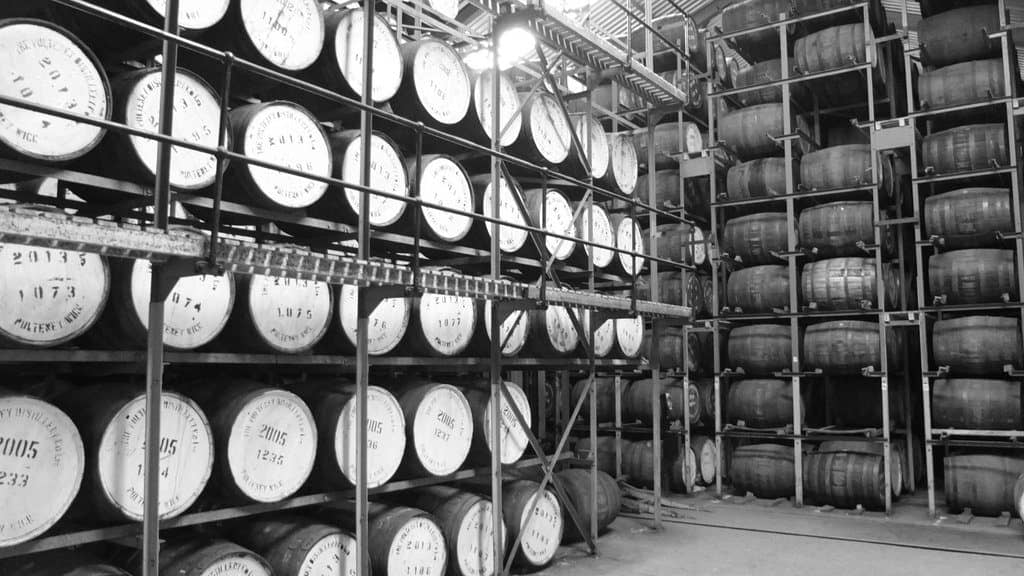 Clearly, the main physical challenge on site is with warehousing. Despite Inver House Distillers investing in twelve new warehouses in Scotland, increasing its maturation capacity by 20%, Malcolm assured me that all of Pulteney’s whisky, which is destined for single malt bottlings, is matured on site. Using both dunnage and racked warehouses, in the latter the casks are stacked so high and, quite literally, the only way is up! Intrigued as to how this affects maturation, Malcolm explained to me that the higher casks mature differently – in a way which promotes the tropical fruit notes, creating a flavour profile more conducive to the 12 year old bottling. Maybe that’s why I like it so much; my mum always told me to aim high.

Another challenge, which is by no means unique to Old Pulteney, is a lack of stock resulting in two age statemented bottlings being withdrawn. Both the core range 17 and 21 years are either being discontinued or in the process thereof. As these are being discontinued, I think it’s admirable that Inver House has opted for a release of a 25 years old and a vintage whisky rather than younger or NAS expressions. However, I’m reluctant to refer to them as replacements due to the considerable price difference. Last year, the 21 years was retailing for £99.95; the RRP for the new 25 years is £300. The 1983 Vintage, a 33 year old whisky, also released this month, will retail at £500; in 2015, the 1990 Vintage (albeit eight years younger) was £129.95. 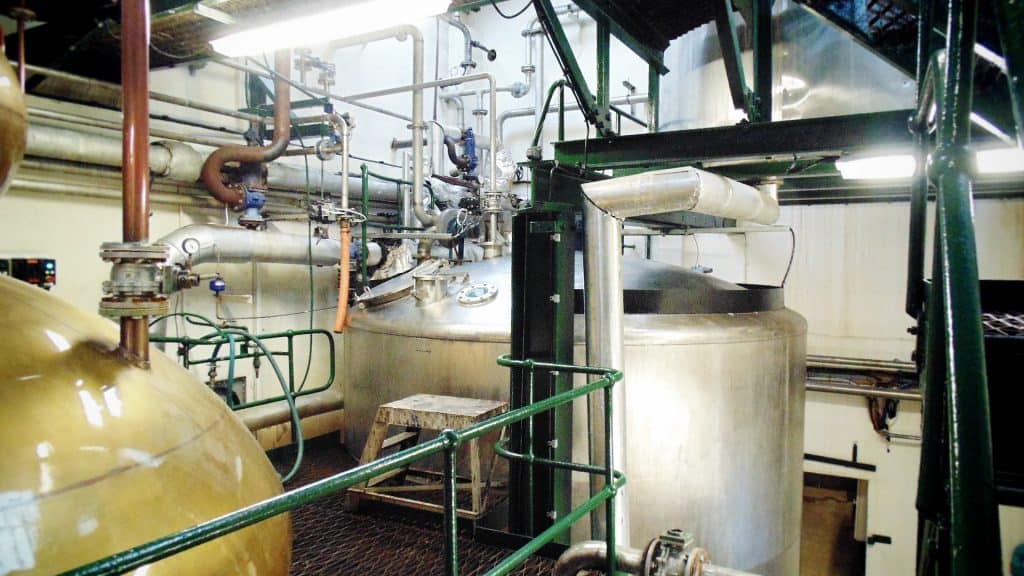 The big question is, are these new releases worth the money? There’s no point bemoaning the price of something you haven’t tasted. Thankfully, as well as the 12 years, 17 years and the distillery ‘bottle your own’ 11 years expressions, Lukasz very generously poured samples of these two new releases. They are undoubtedly good whiskies. However, although I understand that factors such as the extra years of maturation and the limited number of casks available for these new bottlings might be used as a justification, I don’t think the 25 years truly warrants such a disparity in price. I’m a little more forgiving regarding the Vintage 1983 when you look at the current prices of other similarly aged proprietary bottlings. Call me a cynical old boot but, in both press releases, the words ‘premium’, ‘limited’ and ‘exclusive’ appear often enough to suggest to me what the real reasoning behind the increase is. For my part, I reckon I’ll continue to aim high and stick to the 12 years. 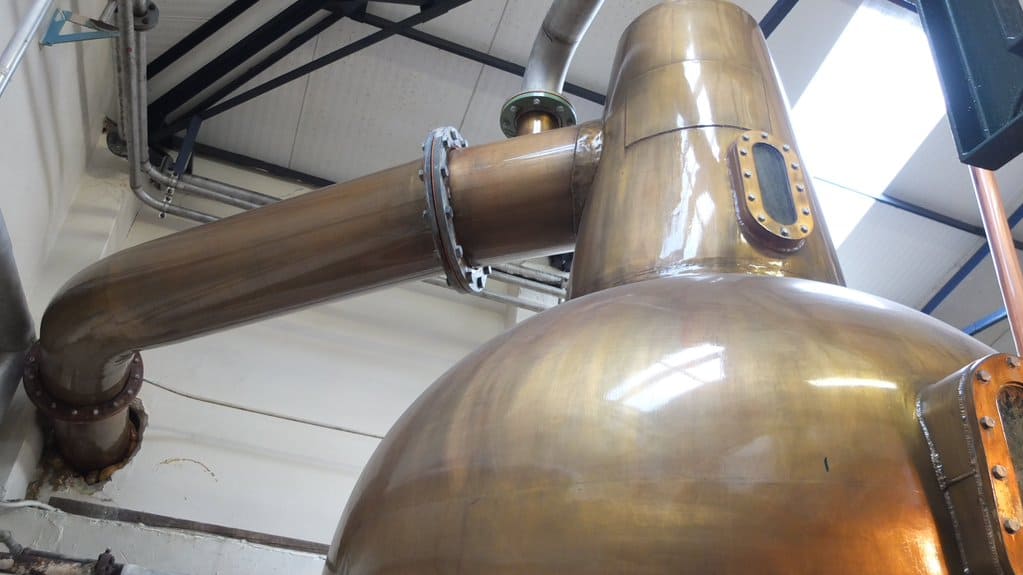 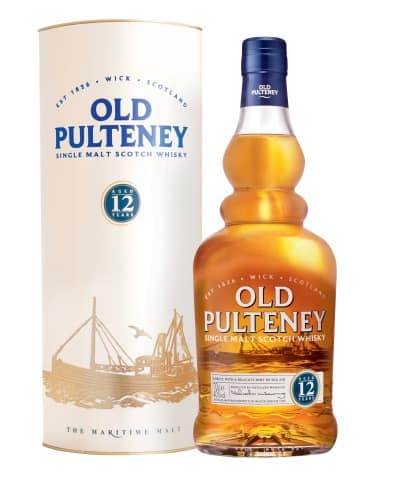 On the nose: there’s an abundance of fresh sea air in the first instance; it really is reminiscent of walking along the coast. After a while, there are hints of lemon drizzle cake followed by toasted flaked almonds. In the background, there are subtle notes of pencil sharpenings.

In the mouth: initially, it’s quite sharp and crisp and it has a slightly oily texture. There are lemon drizzle cake flavours together with brazil nuts and hints of tongue-tingling ginger. There’s plenty of vanilla fudge and it becomes quite drying, but not unpleasantly so, into the finish.

On the nose: initially reminds me of buttered white toast. Milk chocolate notes emerge followed by that smell you get with an old leather belt. After a while, the buttered toast turns more into pain aux raisins. Again, there’s plenty of vanilla fudge but with subtle notes of pineapple cube sweets.

In the mouth: this has a thicker, oilier texture than the 12 years. There’s toffee, ginger and hints of orange marmalade. Barley sugar sweets emerge after a while. Into the finish, it becomes increasingly drying and the ginger spice increases. 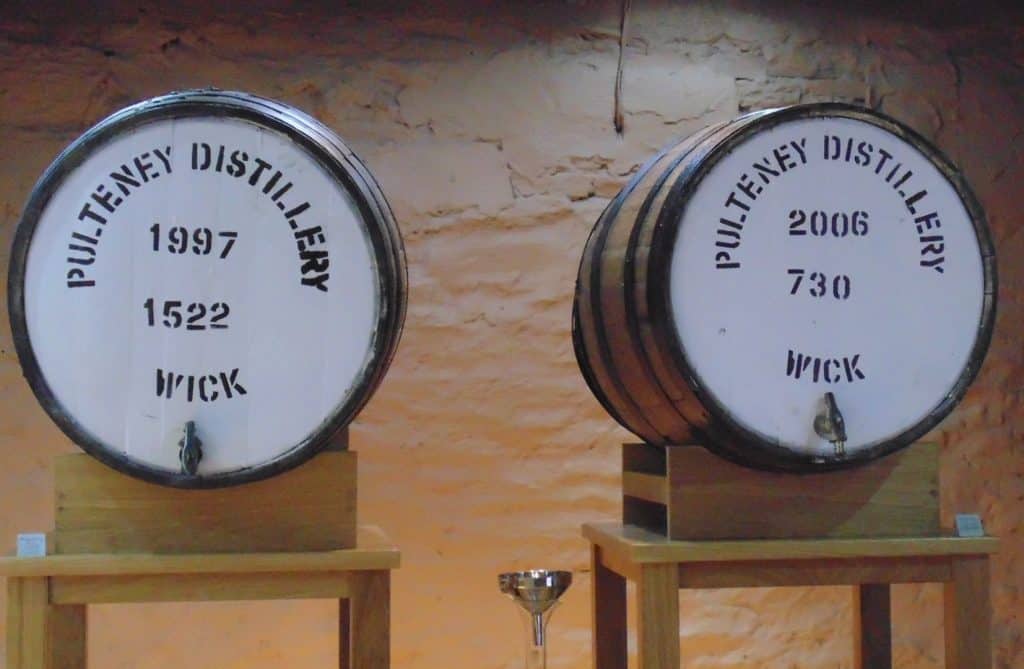 On the nose: Salted caramel fudge followed by rum and raisin ice cream. There are hints of Parma Violets in the background. After a while, there are toffee apple notes followed by Demerara sugar and Weetabix.

In the mouth: There’s a thick, creamy texture with plenty of spice. This is a lick your teeth kind of dram! There’s an abundance of Golden Syrup, ginger and vanilla ice cream flavours. There’s a certain maltiness which manages to rear its head but the ginger is quite powerful and lasts well into the long finish.

On the nose: takes a wee while to get going but there’s a hint of chocolate orange. In the background, there’s some oak but it’s very subtle given the age. Fruit Salad sweets with a hint of blackcurrant emerge after a while. There’s a slight hint of Jamaica ginger cake together with an ‘old’ smell which only makes me think of an old newspaper.

In the mouth: initially, there’s quite a spice kick with the first sip. Dark chocolate flavours start to appear and they develop into something more akin to chocolate covered brazils. Blackcurrant bonbons surface briefly before the dark chocolate returns and continues into the slightly bitter finish. 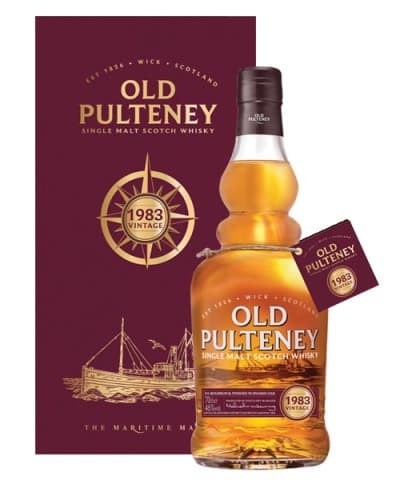 On the nose: Lyle’s Black Treacle is my first thought. Second thoughts are that it’s more Golden Syrup than treacle. A slight pastry doughy aroma appears; sticky toffee pudding aromas emerge. There’s crème caramel and, in the background, there’s something which reminds me of lemon curd. Overall, this smells so, so sweet!

In the mouth: Bakewell Tart in the first instance. It has a thick, more creamy than oily, texture. There’s a mixture of ginger, blackcurrant and gooseberries. There are Morello cherries which turn a little sour into the finish, which is really quite long.

Although my performance made it abundantly clear that a life on the ocean wave isn’t beckoning me just yet, the RHIB ride around the stunning coastline of Wick reminded me a little of the film ‘Whisky Galore’ – the original, not the remake – and thoughts of smugglers with their contraband came into my head. I have no idea if this actually took place but I’d like to think it did.

It also served as a stark reminder of how a distillery can work with its environment – in times past, the sea was the most important transport link for Pulteney distillery – and emerge to become an integral part of the community. Walking around the distillery, and the town, this still feels like the case.

A visit to the distillery and the warehouses brings to mind that bloke in the pub you haven’t seen for a few years; the one who’s gained a wee bit of weight but still wears the same shirts so the buttons are stretched across his stomach. His stories are still the same, if a little embellished for the purposes of improvement, but essentially the place just wouldn’t be the same without him.

A trip to Old Pulteney is long overdue and visiting relatives in Sutherland provided the perfect opportunity to finally head further north towards Wick and..