I love banging on about how good Bruichladdich’s young whiskies can be. Let’s face it, the production values that are in place there mean that a 6 year old Laddie can, in my opinion, taste far better than a lot of the weak, grassy vanilla nonsense being decanted out of Scotland at the moment, particularly in the indie sector. But I’ll be honest, it’s been a good long while since I’ve tasted much old Bruichladdich spirit and the question arises in my mind: how does it compare to the old days?

Looking back among my almost 40-odd reviews of proprietary bottlings, (the number is 37, with more indies, but this would take me up to 40 – and it’s a fine way to celebrate 40 tasting notes), I tend to find I enjoy those around 16 years of age (that seemed to be a thing, back in the day – there was a lot of good stuff at that age), but nothing really went into the 30s.

Today I have three very old whiskies from Bruichladdich distillery, 30 years or older, and they are to my knowledge the oldest Laddies I would have tasted. They form the new Bruichladdich Rare Cask Series, each of which costs £700 pounds a bottle.

Which in short means, we’re not messing about here.

Yet these whiskies were distilled before 2001, before Mark Reynier resurrected the distillery and, in fact, back in the days when we could say that there wasn’t much hope for the industry as a whole. What was the way of life back then in this remote Hebridean island? Few can say. But we must remember, in the mid-1980s, Diageo was busy closing the likes of Port Ellen (most likely as it was a bit shit) and no one could imagine for a moment that the world would become as excited as it is now about single malt whisky. No one gave a fuck about whisky.

What were the production values back then? In terms of the wider industry, probably not great. There was the use of very old casks – fourth, possibly fifth-fill wood that would have very little value other than seeing spirit over the line to become whisky for blends. Not everywhere, of course, but the future of this industry will be about achieving a standard that likely wasn’t realistic back during this period. Generally speaking.

So what was Bruichladdich up to? Who can say? These were hard times, the focus on quality probably wasn’t the same, but this is why Bruichladdich came up with the whole ACE (advanced cask evolution) philosophy. When in 2001 the team inherited the stock, they realised that the wood policy needed something radical. Which was really an attitude above mere finishing, ensuring that spirit went into good casks, at the right point of maturation. (I always think a bad example of finishing is Bladnoch putting their 25 year whisky right into virgin oak – what the hell?)

Anyway. The Rare Cask Series. Ancient Bruichladdich spirit, in which the current team has had their fun in terms of vatting, double maturation and finishing. £700 a bottle, then, and what do you get for that? 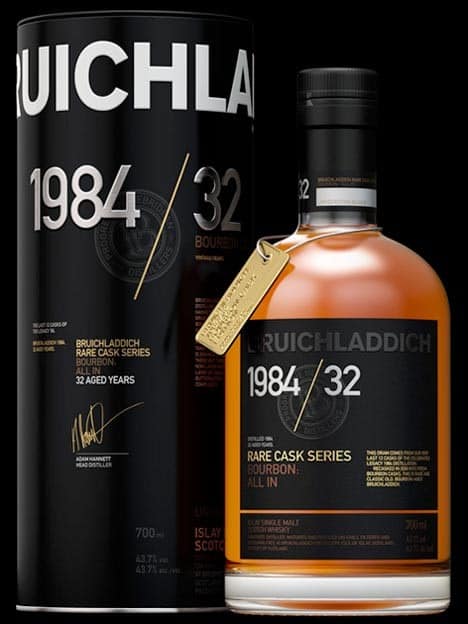 43.7% ABV. Vatted from 12 casks of ‘classic’ Bourbon-aged Bruichladdich, filled in December 1984 then moved into fresh Bourbon casks in 2008.

In the mouth: awesome texture to this and a huge hit of flavour for the ABV. Heather honey with Seville orange marmalade. Not as sweet as the nose: this has quite the herbal undertone, vegetative, mineral notes.  Buttermilk, Custard Cream biscuits. Cloying and thick, with golden syrup cake, ground almonds. 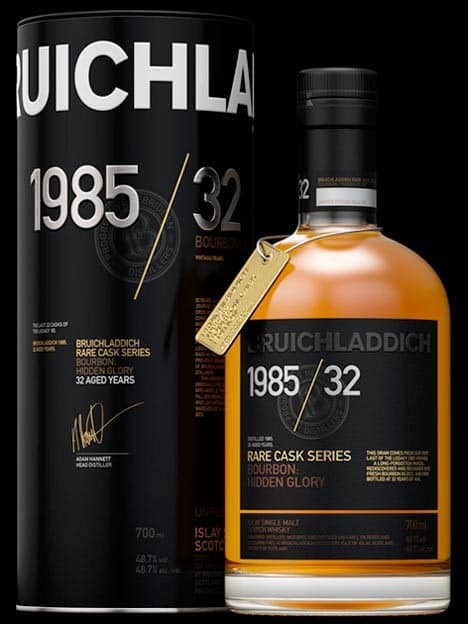 48.7% ABV. The final 22 casks of legacy stock filled into third-fill Bourbon casks, then re-casked into fresh Bourbon casks in 2012, before being moved into oak from ‘one of the greatest French Chateaux’ in 2017.

Colour: tawny, with a pinkish hue.

On the nose: peaches, cranberries, mango. The topping off a crème brûlée. Strawberry jam – the filling from a Jammie Dodger and, in fact, the biscuit that surrounds it. Mixed peel, marzipan. Port – and plump, plum-like quality eventually. Golden syrup sponge cake. Then, once this heady stuff fades, we’re left with some epic floral notes: old roses, stock flowers, before returning to some lovely vanilla and burnt toffee.

In the mouth: fuck me, that’s amazing. To be hit with a disparate yet balanced array of notes on the flavour wheel is a joy – and in a way, no one flavour asserts dominance. A silky texture: strawberry jam, cranberries, salted caramel chocolate, hazelnuts. Armangac. Stem ginger. That syrup again, perhaps Maple Syrup rather than golden. There’s a headiness about this and – astonishingly – it’s not at all woody. The spices come from that gentle ginger – there’s nothing aggressive, not even remotely astringent. Chocolate returns: dark, but not bitter. But it isn’t the flavours in isolation, it’s the way they combine under that heavy, dense Laddie texture. This is finishing done in the correct, respectful manner to the spirit, rather than to mask flaws in the spirit. It’s an awesome bit of stock management. La petite mort.

I whisper to those of you with £700 burning a hole in your pocket: you might want to buy this. It isn’t for sharing either. It shouldn’t work: having spent most of its life in a passive cask, it clearly helps having a few years of active maturation. 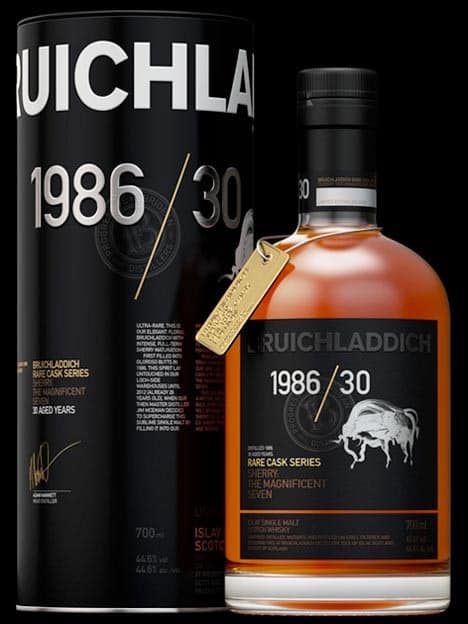 44.6% ABV. This was vatted from seven oloroso Sherry butts filled in 1986, then transferred into Pedro Ximénez Sherry butts from Bodegas Rey Fernando de Castilla in 2012.

On the nose: Figs, sticky damson jam, the sort of richness one finds in a dark chutney. Cinnamon, yet a black tea, tobacco element. Dates, really intense. Curiously there’s very little mustiness or oakiness that one might expect from such old casks. Mince pies. Ginger biscuits. A little balsamic vinegar. Very un-Laddie like.

In the mouth: Jesus, that thickness to the spirt, the sheer viscosity, the heaviness to this usually light Laddie spirit, is outrageous. Yes, we have the richer end of dried fruits: figs, dates and prunes, but there’s a lovely savoury undercurrent to this. Meaty and sweet: honey-glazed ham, grouse with a blackberry sauce. And it’s that balance that takes this beyond mere ‘sherry monster’ territory. The damsons and plums continue here: tart blackcurrants, perhaps even a touch of elderberry. Dark chocolate. Assam tea, tobacco once again, but remarkably not at all too woody, not at all too much cask influence, but calling things a day at the right moment in time.

You might gather from this that I enjoyed these whiskies – and you’d be right.

The Bruichladdich 1985 32 Year Old – Bourbon: Hidden Glory was just incredible. We actually use the whole of the points system here at Malt – from 1 to 10, rather than lingering in some bizarre land of 70s, 80s, and 90s all of the time – and so the 10 needed to be wheeled out. We probably won’t do it often, but we shouldn’t be afraid of giving out full marks and marking out those elite whiskies.

But in short, whisky, really, has no business being this good.

And the 30 year old sherry cask! A sherried whisky that transcended being a mere sherry bomb: this was different, not like your Glenfarclas whiskies or even GlenDronachs, but somewhere different on the flavour map – and bringing with it numerous different complexities. Tarter, sharper, not woody in the slightest.

The Laddie spirit at this age, in these casks, has almost been a transcendental experience. Who knows, really, what they were doing three decades ago when the industry was in a pretty shitty state. That’s one of the marvels of the industries: that Things Happen with time. All I know is that this Rare Casks series is something else. Two are brilliant, of which one is astonishingly good.

I think I need to lie down now… 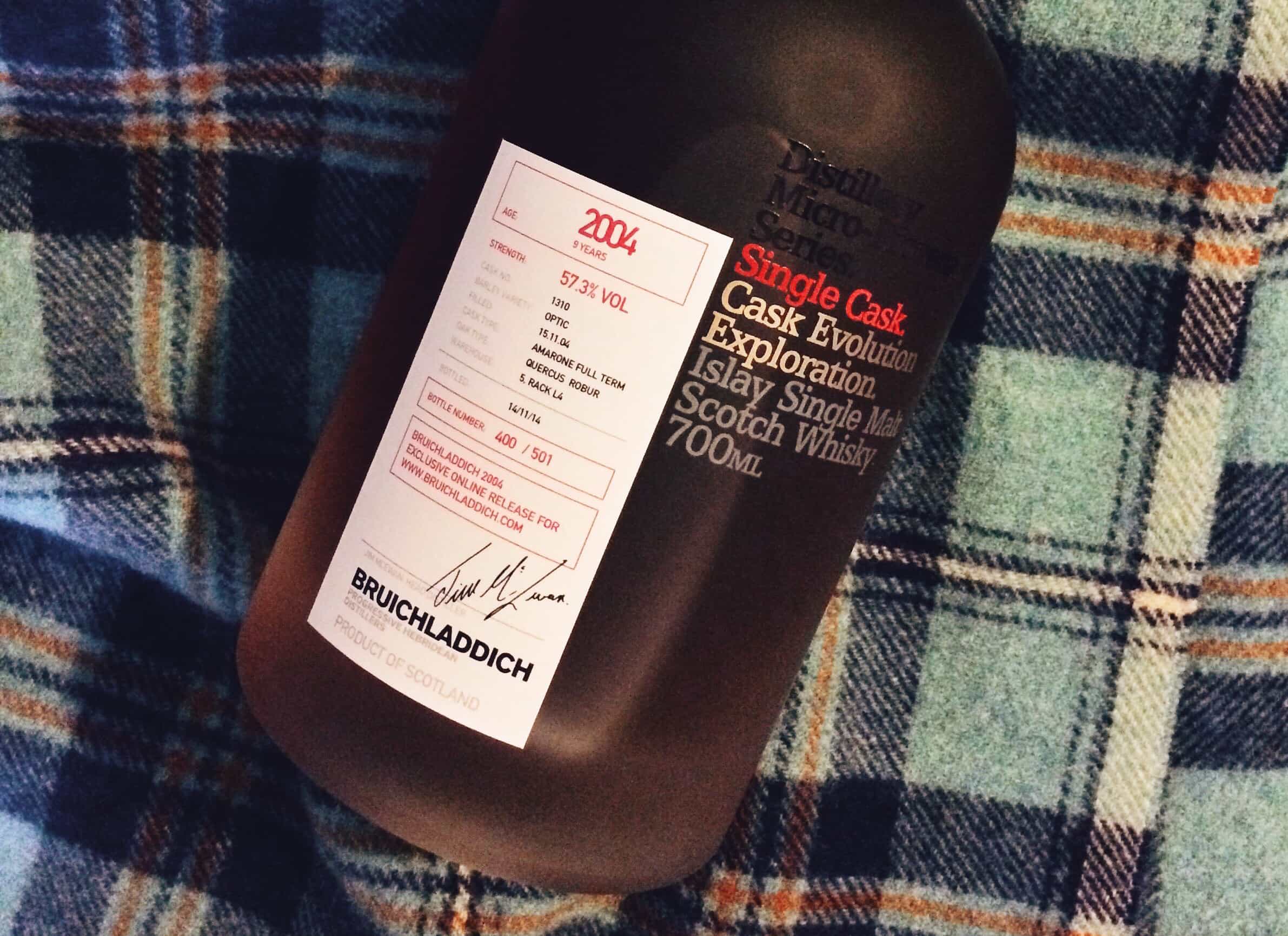