What were you doing on the 21st June 1982? It’s the point in time that this ceramic Bell’s Scotch whisky release celebrates with the birth of the Prince William of Wales. Chances are you looked dashing in highwayman fashion, gyrating to Adam and the Ants, or were more dressed down to pass the Dutchie on the left-hand side? Yes, I acknowledge those yet to join the fanfare of life in 1982 are reading this slightly confused.

Much like my recent Balblair 2006 hand-fill review, this whisky is a gateway to memories and recalibration. Whilst personally I cannot remember June 1982, I do possess some distant memories of primary school and dances to Eye of the Tiger, Do You Really Want to Hurt Me, Happy Talk and Come on Eileen, which were all number 1 singles from this year. These are memories from Rosyth that have remained buried away for decades until the opening of this ceramic bottle.

It’s far too easy to look back with rose tinted glasses when debating how things once were. Whether its music, whisky or a multitude of other offerings it’s all a matter of opinion based upon recollection and hazy memories. More validity is offered by whisky as you can compare the blends of today with their counterparts. This is something I have tried before and hands down, blends prior to the 1990’s and the computerisation of Scotch are on the whole superior. A greater malt ratio certainly, but even the grain whisky was of better quality, lacking the industrial taint that we can taste nowadays. Let’s not forget the quality of the casks utilised either and I guess less standardisation and consistency as a whole; much like the record buying public of the time.

These Bell’s decanters are the curse of auctioneers across the breadth of the UK. Banned by some, there is still a market for these mass-produced oddities which were supposedly collected and hoarded by Royalists or those that like to purchase matching mugs, plates and bric-a-brac.

Now these custodians of whisky linger in masses waiting to pounce on unsuspecting auctioneers. Few claim a worthwhile price and the trick is they are often overlooked by the masses. Except those who know that some of these ghastly presented ceramics harbour a taste of the past and a good dram.

These vessels are not without their problems. Ceramics are prone to evaporation and a poor seal with the cork. By nature, they’re not conceived to remain unopened for prolonged periods of time. I’ve yet to open one that hasn’t required some additional work to extract the liquid from the flaky dry cork, but ultimately its worth it and the fact that these are selling for under £20 is an added bonus. This particular 1982 example is a 50cl release and was picked up for £12. After fees and scaling up to a 70cl size, this Bell’s cost just under £19 in total.

We should have a paragraph at least about the Bell’s brand that has been synonymous with Arthur Bell & Sons who were established in 1825. A huge presence in the UK market, in 1980 around a 3rd of its business went abroad including this decanter that was destined for Spain. The export market around this time was booming for Bells, having only offered revenues of £3 million during the mid-1970’s this had grown dramatically by the early 1980’s, reaching over £30 million. This family business ended in 1949 when it became a public company and remains a widely recognised brand to this day.

Sadly, I’m not much of a fan of the Bell’s you can purchase at your local supermarket for almost next to nothing nowadays. It’s more grain focused and I miss the quaint styling of the range that offered these decanters, the Extra Special, Pure Malt and the lovely Royal Reserve 20 year old. These are consigned to the history books but through whisky we can open and engage with such memories and lost examples. This broadens my knowledge, experience and appreciation of the past as well as the current.

We know that the nearby distilleries of Dufftown and Pittyvaich were the workhorses for the popular Bell’s range. Neither are high on my list of favourite distilleries, nor will they ever rise from the lower end of the scale. However, skilful blending and marriages of such whiskies can create a more harmonious whisky. Having overcome the dried out flaky cork, decanted and rested the contents in a new bottle, it was time to adorn the face paint and engage with 1982.

On the nose: buttery caramelised apples with some vanilla pod taking us into a gentle toffee. A touch of grain towards the end but this feels lively after 35+ years held captive in such an awful decanter. A hint of calamine lotion (aka Pittyvaich) and nutmeg towards the end. Water brings out meringues and a touch of mint leaf freshness.

In the mouth: a simple soul in reality but quite a leisurely stroll with more oily aspects, plenty of cereals – Blair Athol – and then the toffee. Water loosens things up with more cream coming forth, wood chips, milk chocolate and vanilla.

Sometimes you purchase these things and as you cannot see the contents or the fill level its down to guesswork partially. Upon opening this Bell’s, it had lost about 3cl yet was more than drinkable the longer you left it to open up. For an early evening dram its perfect or just as a discussion piece. This Bell’s doesn’t trouble with hidden depths or mysteries but retains a charismatic character.

Thanks to Just Whisky for the photograph 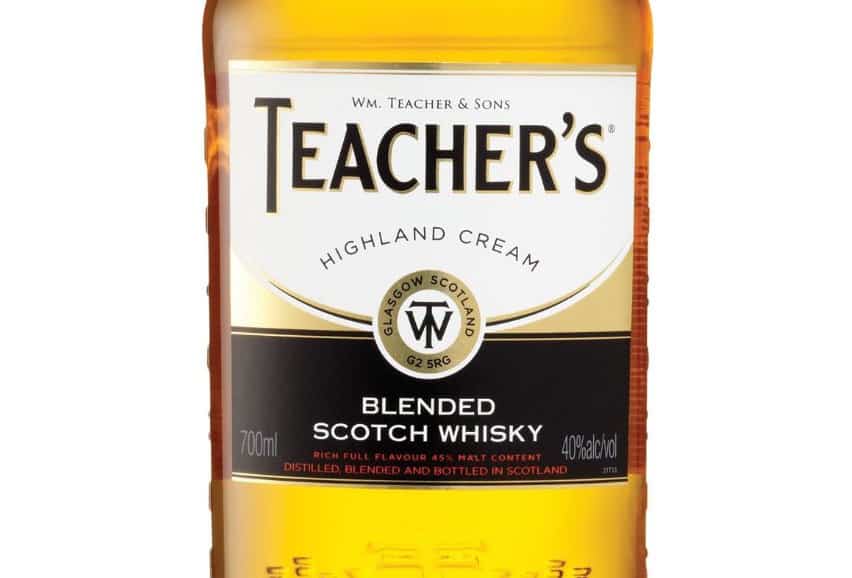 Scottish Leader is a blend you’ll see sitting on the supermarket shelf but in all likelihood haven’t reached for a bottle as of yet. I..