There is a train of thought amongst some that Dufftown, in terms of whisky, is in decline. This bar theory was hatched upon further discussion around the heavyweights of Balvenie and Glenfiddich. Also open to debate was the decay of Mortlach and the existence of dirty, dirty Dufftown.

Pitty Pittyvaich whilst Kininvie remains an unknown quality. Then, there’s no forgetting Glendullan – well, in reality, there is – especially since its 1970’s bland makeover. The iconic yes its still standing Parkmore despite the lack of investment from its current owners. It’s a vibrant and magnetic location with whisky literally the lifeblood of the town. A warm welcome is always guaranteed and if you should visit during the Spirit of Speyside Whisky Festival, then you’re in for a real treat.

Whilst its decline made for a thoroughly engaging and well-substantiated debate on both sides. What was agreed amongst our small clan was that the real jewel in the Dufftown arsenal remained Convalmore. Sadly it must be said we’ve never had the privilege of experiencing a whisky from Parkmore so this must be acknowledged. However, of the others, we were well versed and informed. Particularly so of Convalmore although sadly my own stash of this closed distillery has dwindled into the history books.

What makes Convalmore so enjoyable? It’s a good question and one that’s not straightforward to answer much like our bar debate. In essence, it’s best summarised as a whisky that offers a little bit of everything to everyone. You have the classic Speyside fruity nature and approachability. The enthusiasts amongst us could claim it offers that classic old school whisky blueprint with an evocative nose followed by a layered palate with a hint of smoke and a finish that leaves you reaching for another pour. It’s a real crowd pleaser and from memory during last year’s Rare & Old Show in Glasgow, it remained relatively affordable and a match for many more illustrious names.

The distillery itself still stands on the edge of Dufftown. There is a rather strange atmosphere that surrounds the site today. The impressive stone architecture dates from 1909 when the distillery was largely rebuilt following a devastating fire. The original roots of Convalmore go back to 1894 when it was founded on the crest of whisky boom that was propelled by blended scotch.

Today’s owners are William Grant & Sons who also own a trio of Dufftown distilleries outside of Convalmore. Although the internal production equipment was removed many years ago, the shell of the distillery now hosts maturating casks from this producing distilleries. A couple of year ago now, we were fortunate to walk the grounds and there is a sense of time standing very still. To the side, a corner plot played host to former casks and some internal mechanisms. With the recent resurrection of Brora, Port Ellen and Rosebank it’s only natural to consider the status of Convalmore. Unfortunately, it’s never enjoyed the same popularity of legendary reverence as the aforementioned trio. Then you have the need for warehousing in and around Dufftown alongside the fact that Diageo still retains the name. This has been utilised in recent years with a couple of releases as part of their annual Special Release programme. The Convalmore whiskies were almost a match for the Port Ellens and Broras of the same vintage except prices in excess of £600 for a relatively overlooked distillery remains a hard sell. That was in 2013, which seemed steep but then for 2017 a new edition reached £1200 as its asking price. Needless to say, it’s still available.

Convalmore is a fantastic whisky but not at £1200 a bottle.

At least standing on the fringes of Convalmore, we could only drink a dram of its whisky and toast a fallen but not forgotten distillery. Today, we’re here to review a rather special Convalmore bottled by Cadenhead’s as part of its 175th Anniversary celebrations. Bottled at 56.8% it certainly had a lot of life left within the cask potentially. Having been distilled in 1977 before residing in a sherry but for just 4 decades. An outturn of 522 bottles was unleashed and proved popular amongst today’s whisky market. I’m reminded of the 39 year old Caperdonich that I reviewed also from Cadenhead’s last year. That I felt was more cask than showcasing the true nature of the distillery. What remained was still a fine whisky but somewhat unbalanced and a slightly eerie apparition of what might have been.

On the nose: a very creamy Highland toffee with a flurry of tobacco. There’s a real richness here, but its far from a sherry beast thankfully. Stewed apples with cinnamon, peaches with some vanilla pod and dried orange that transforms into Jaffa Cake with the dark chocolate. A touch of smoke of course and towards the end herbal notes of withered basil and mace.

In the mouth: a real assortment of spices with nutmeg, black pepper, cardamom and a little liquorice. An everlasting finish of dried oak and a melon sharpness. Retreating back to the beginning there’s a lovely texture without being chewy it’s rather oily and buttery. A restrained vanilla toffee, followed by one of those tinned fruit salads featuring all sorts of offcuts, a worn leather bookmark and gooseberries then that touch of smoke again.

Captivating in its own way. This Convalmore has much to offer in harmony with a great cask. Layers and layers of flavour, its a thoroughly pleasing and drama fuelled experience. Not a classic Convalmore as it just falls short of the mark, but here and there you can see the distillery DNA poking through. A memorable dram that underlines the theory of Dufftown’s finest.

Thanks to the Jenga master Noortje for the sample and photographs! 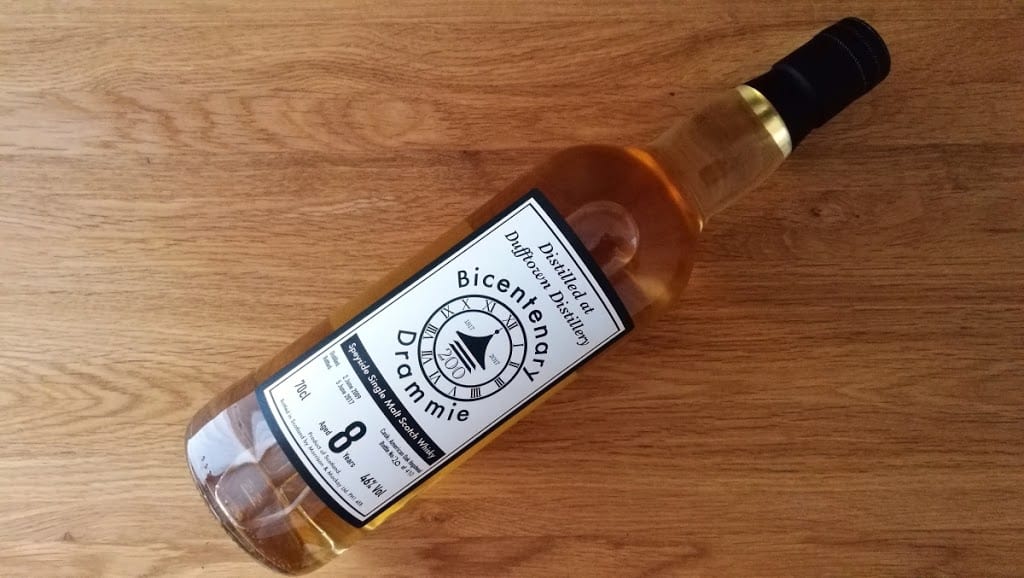