Tomintoul isn’t a distillery that attracts much adoration from the masses despite pitching itself on the more traditional style of presentation and prices that still seem on the whole reasonable and value based.

Founded in 1965 during the midst of a whisky boom. Tomintoul is another example of a distillery from this era built to provide content for various blended whiskies. Many of these establishments have continued in this vein without too much focus around single malts. For Tomintoul it’s also had the inconvenience of a myriad of owners. The Scottish & Universal Investment Trust, Whyte & Mackay to Brent Walker have all come and gone.

Today’s owners in Angus Dundee have been at the helm since the turn of the millennium. Since then we’ve seen a focus on expanded Tomintoul’s value as a single malt whilst establishing company brands such as Scottish Royal and Big Ben with additional support from their other distillery in Glencadam; another value single malt. It seems to be a very successful formula internationally for the firm who have found their own niche within the whisky industry.

The Tomintoul site may offer the blending facilities for Angus Dundee but we’re firmly focused on the single malt expressions today. Rather than charging through the official range, which is refreshingly primarily age statement based, a more attractive route is going back in time. For further reading I’ve previously reviewed the staple 10 year old Tomintoul a couple of years ago and Mark sat down with the 25 year old Tomintoul as well, which retails now for circa £180. Apart from these detours it seems a very rare destination whisky wise so we’re correcting that in 2018 at Malt whilst having a bit of fun.

As a marker I thought it would be beneficial that I also include the official 25 year old in this wee vertical. In theory – remembering when I purchased it – this should take us back to the late 1980’s or 1990 in terms of distillation. There are older official Tomintoul’s with a 31, 33 and 40 year olds now available – so there’s plenty left to discover. Then we have the impressively adorned gold label release from Cadenhead’s at a mighty 30 years of age. Released in 2015, this was distilled in 1985 before residing in a bourbon barrel. The final outturn was 192 bottles and you may still find it around given the lack of enthusiasm for Tomintoul. Whisky is very much fashion based and who shouts the loudest. My experiences show that these fanfare headline hogging types don’t necessarily produce the best whisky.

A late entry is the 15 year old Portwood finish. Given this article on Malt has been pushed back or ignored more times than a council tax reform. I spent 30 minutes with a dram at the Albanach whisky bar in Edinburgh. The dram cost me just over £8 and didn’t exactly represent value for money. The asking price today is the best part of £70 for a bottle and is limited to an outturn of 5820 bottles.

Rounding off our wee voyage of discovery is a Tomintoul-Glenlivet distilled in 1967. This should be of particular interest being distilled shortly after the distillery was established. Whisky geeks will also realise that this particular whisky will come from the original still set up, as Tomintoul until 1974 only had 2 stills. This bottle was destined for the Irish market as an 18 year old and was bottled in 1985 at 40% strength. Interestingly it was imported by Irish firm A.B.C. Limited in Dundalk and matured in their bonded warehouse (no period specified) under supposedly ideal conditions according to the reverse bottle label featuring a clay floor. This sample along with the Cadenhead’s bottle were purchased at the Dornoch Castle Whisky Bar – an amazing resource for whisky discoveries. Without them or the generosity of others, I wouldn’t be able to put together such interesting comparisons that we have lined up here.

Except, the delays backstage at Malt continued and allowed the addition a couple of bonus drams to the menu. These show a different side to Tomintoul today.  Firstly, the Tlàth represents the entry level point without an age statement and being matured exclusively in ex-bourbon barrels. Tomintoul with a Peaty Tang features unsurprisingly a peated element in the mix and is again without an age statement. Hopefully the vertical is now complete and we can delve into the whiskies themselves.

Colour: sand dune
On the nose: a gentle honey with a ginger infusion. Baked apples with a rich buttery pastry, a slight cinnamon influence and some citrus elements. There’s a floral note and caramel
In the mouth: very approachable and not too taxing to summarise with an attractive texture. Wine gums, barley sweets and vanilla fudge. Plenty of cereals as well with porridge oats, grapefruit and almonds. A tinned golden syrup with that slight metallic edge on the finish that dissolves into a light honey.

Colour: a light rose tint
On the nose: interesting a mix of a freshly scorched Creme Brulee and roasted coffee beans. A light toffee proves enjoyable and there’s a gentle influence from port cask with strawberries, red apples and cranberries. A light grinding of nutmeg rounds off an inoffensive and pedestrian nose.
In the mouth: initially not a huge amount of character. It feels constrained and timid. A little clammy and clay-like. There’s a slight tart aspect more dried cranberries towards the end and those ghastly freeze dried raspberry fragments. Orange on the finish comes through on the finish with a raw dough or undercooked bread consistency.

Colour: apple juice
On the nose: surprisingly light with a touch of smoke and Pink lady apples. There’s caramel, marzipan and meringues with a whipped vanilla cream followed by a putty aspect.
In the mouth: predominately spicy with elements from the cask coming through strongly, but there’s a gentle caress of fruit and lemon sponge with a sugary icing. Apples yes and 5-spice with a nutty oaky finish. Returning, there are toffee apples and a resinous bark in what is a refreshing dram.

Colour: a week old tan
On the nose: a very shy nose with very timid elements perhaps reflecting the 40% strength. Digging deeper there is some orange peelings, a dried cinnamon bark and elements of a light caramel. Stewed apples follow with a gentle syrup and a black breakfast tea.
In the mouth: very thread bare with oaky notes and an oily quality followed by a faded vanilla essence, grapefruit and . Towards the end some cardamom and ashy features that turn into black pepper.

Colour: golden oats
On the nose: very inoffensive and verging on timid. Elements of honey, dried orange, a slight floral vanilla freshness and cornflakes. I wish I could write down more characteristics but this is almost a forensic excavation to reveal what exists. Some red apples, elderflower and syrup appear after time in the glass.
In the mouth: a little better than I was anticipating. More of that tinned syrup characteristic and a metallic quality towards the finish. Crushed Scottish oats drive the cereal aspect onwards, doused in light caramel there’s a sweetness to the dram with orchard fruits towards the finish. It lacks a body, an emphasis and texture. There is a spirit driven style that’s evident and a reflection of its youthfulness.

Tomintoul with a Peaty Tang – review

Colour: a light honey
On the nose: well, there’s certainly peat here. Not too forceful, rather a gentle caress than a skelp across the head. Pine cones and a degree of coastal saltiness. It feels slightly alien for a Tomintoul. Lemon peel brings a freshness and lightness to the experience alongside some salted peanuts before a floury dry finish.
In the mouth: a gentle sweet peat well married with the cereals and syrup of Tomintoul. Again, its pleasant and inoffensive rather than being challenging. Subtle, restrained and a touch of that coastal influence again rather than an earthy, dense peat. Damp hemp, milk chocolate and hazelnuts round off an interesting alternative.

Well, lets start with the 1967 that really shows early Tomintoul was purely blending fodder and not exactly top draw either. The 40% strength doesn’t help whatsoever and you have to speculate on both the quality of the casks utilised and maturation conditions. Thankfully the Cadenhead’s release shows more vitality and confidence. It’s very agreeable and perfectly acceptable without setting off any stampedes for another bottle.

The Tlàth is a beginner’s whisky. It fails to stir the soul, but it does have a design brief to fulfil and lure newbies into whisky and Tomintoul. Therefore, it’s simple and light straight from the bottle without the need for water.

The Peaty tang is something different. Is it a perfect fit? No, it does feel engineered and slightly alien perhaps trying to tap into the booming demand for anything peated currently. Much like a heavily watered down young Laphroaig its not really setting an agenda or achieving anything. Would I drink it? Yes, but it doesn’t feel like a long term successful marriage. There are better distilleries out there doing peat on the mainland that ultimately feel more comfortable and damn it, interesting.

The official 25 year old is pleasant, but nothing dynamic that warrants its current price point and the Portwood just smacks of trying to desperately inject some life into inept maturing stock. On this basis Tomintoul remains an enigma but we’ll return to this distillery on Malt soon. 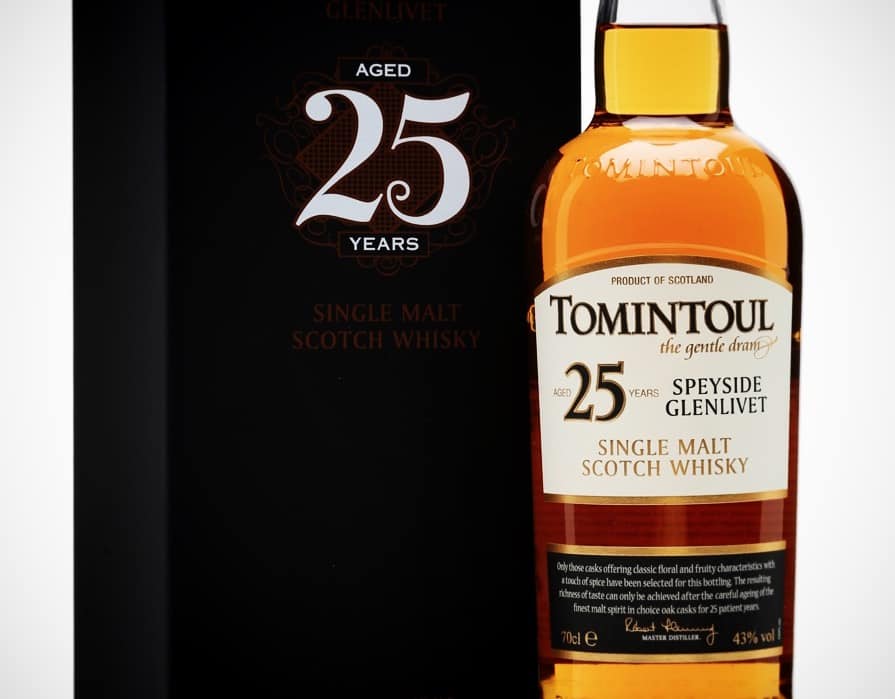