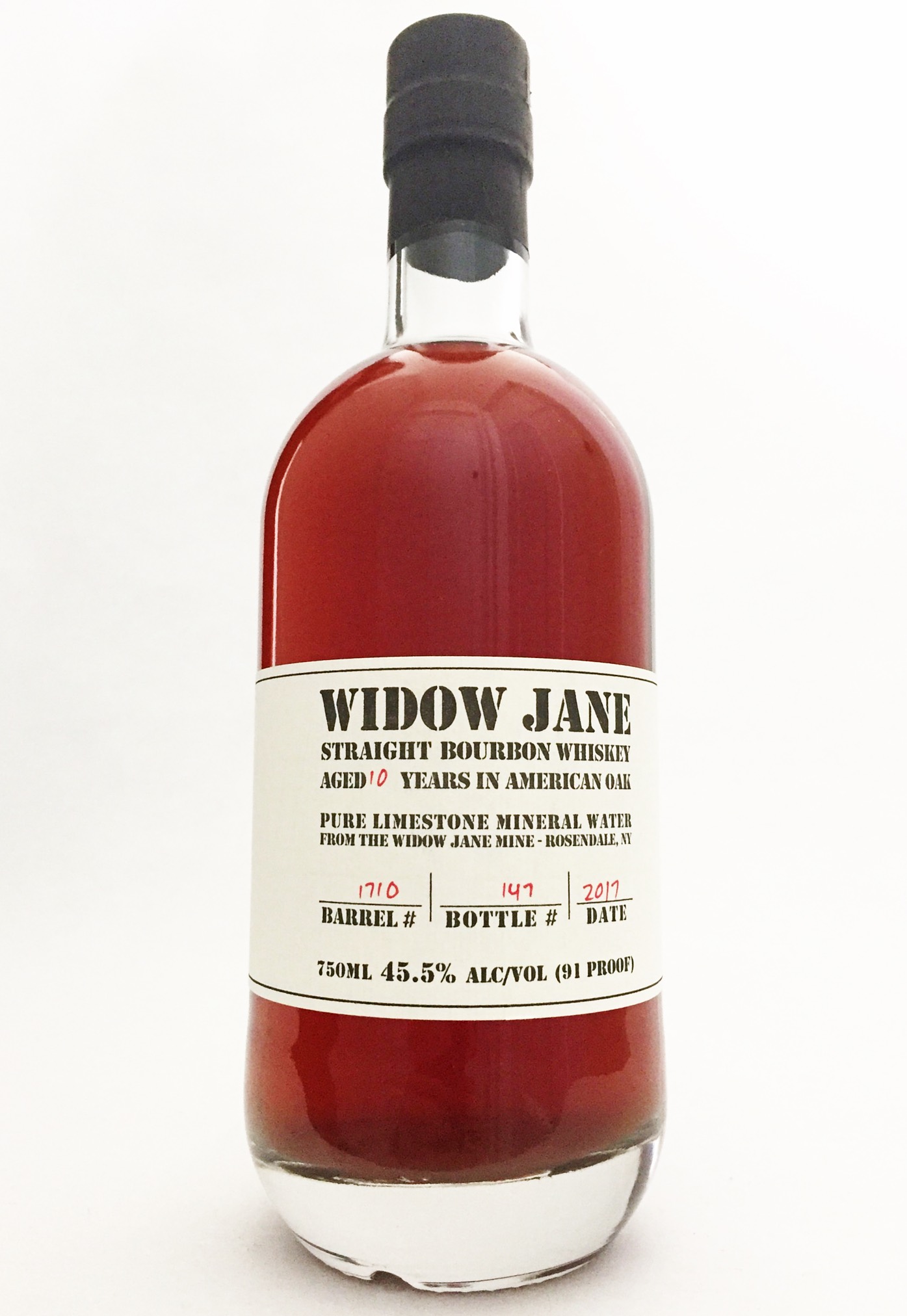 If you don’t follow the circus that has become, or arguably always has been, American politics, I can’t fault you. But perhaps you’ll stick with me as I briefly recap a February encounter between two US politicians when I tell you that the story involves bourbon and an embarrassing gaffe.

A True New York Bourbon… Made in Kentucky

On February 12 Democratic US Senator Chuck Schumer, hailing from New York, arrived at a conference at the University of Louisville bearing gifts for Republican Senator and Kentucky resident Mitch McConnell, also known as Turtle Face. (Really, the resemblance is uncanny. I will pause the story here so you can pull up side-by-side pictures of Mitch McConnell and a turtle.)

It turns out Chuck Schumer attended the event not only to deliver a speech, but to also deliver a bottle of bourbon that was accompanied with a quip. As Schumer was giving his closing remarks he began emphasizing his commonalities with Mitch McConnell, as opposed to their more widely publicized ideological clashes. “Now here is another thing you might not realize we have in common. Bourbon. It turns out that Brooklyn, where I was born, raised, and still proudly live, produces some of the best bourbon in the world. I know that’s a contentious thing to say in these parts,” he said amongst laughter from the audience, “but I think it’s true!”

He then procured a bag from behind the podium and placed its contents into full view. “Now this particular bourbon, Widow Jane, is distilled right around the corner from the apartment where my wife, Iris, and I have lived for more than 30 years. It’s filtered through the same limestone that was used to build some of New York’s iconic structures, from the Brooklyn Bridge to the Statue of Liberty. And as a thank you for his invitation, I’d like to give this bottle of Widow Jane to Mitch McConnell.” To this, the two politicians walked towards each other, shook hands, and posed for photos with the bourbon in hand. McConnell then jokingly retorted, “There is no such thing as Brooklyn bourbon.” 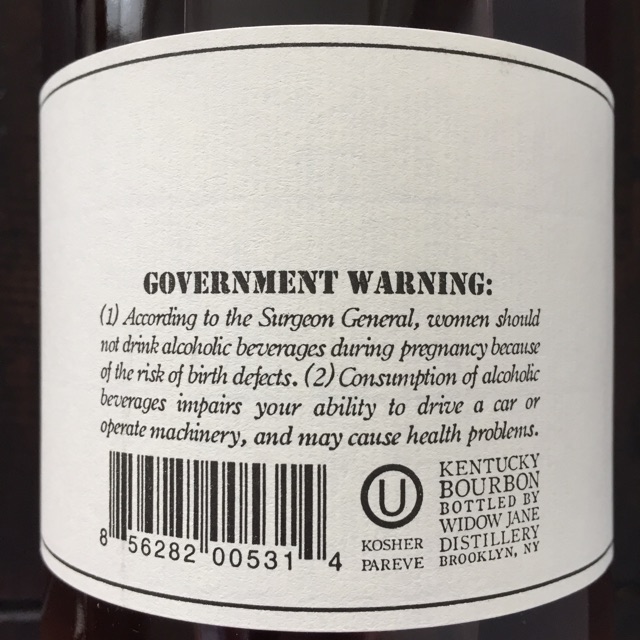 Some of you might be saying, “Touché, Schumer! Touché!” If this is the case, I would advise you to suppress the premature admiration of his wit.

What Chuck Schumer actually achieved to do is gift a Kentucky Senator of the opposing party a bourbon that is sourced from, well, Kentucky. In fact, if you turn the bottle around and look at the only other thing on the back label besides the Surgeon General’s warning, you would spot the words “Kentucky Bourbon Bottled By Widow Jane Distillery”. Ooof! Good try Chuck. Side note:  It’s a bit scary to think what critical national issues politicians are potentially tackling while equipped with inaccurate or incomplete information. But I suppose making a parallel between the purchasing of bourbon and the structuring of political agendas is a tad dramatic. Anyway, I digress. Back to the bourbon in question. 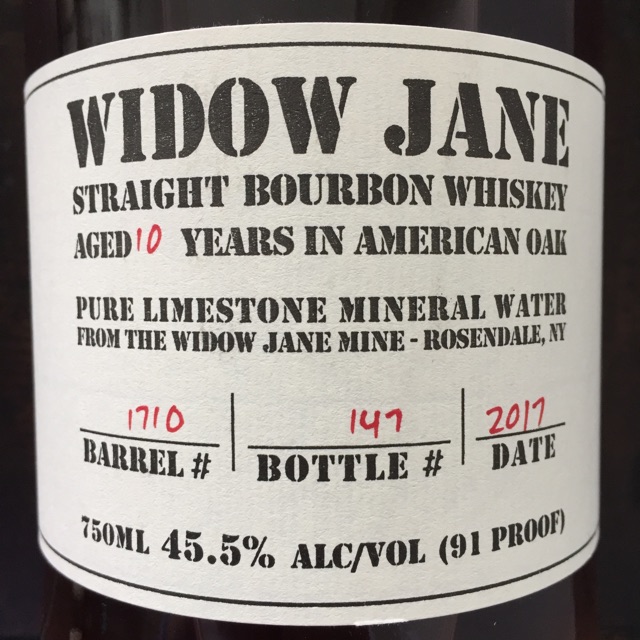 The Widow Jane Distillery in Brooklyn, which is owned by Samson and Surrey, actually acquires whiskey that has been distilled and partially aged at an undisclosed distillery in Kentucky. It appears that it was previously sourced from MGP in Indiana when Widow Jane was under the former ownership of Cacao Prieto. According to Michele Clark, Widow Jane’s VP of Operations, once the whiskey makes its way to New York from Kentucky, it serves the remainder of its 10 year maturation service onsite, when it is then proofed and bottled by Widow Jane.

The proofing step seems to be a critical part of Widow Jane’s identity. “Pure limestone mineral water from the Widow Jane Mine – Rosendale, NY” is prominently splayed across the front of every bottle. They expand on this via their website. “The fact that Kentucky is the epicenter of American whiskey production is due to the special properties of its limestone-filtered water and the minerals it contains. Well, Rosendale Limestone possesses an even higher ratio of beneficial minerals than that found in Kentucky and its sparkling waters are as pure as its namesake, the Widow Jane.”

The (Un)Importance of Limestone Water

Widow Jane bourbon, along with another product called Old Limestone Mixing Water, likes to peddle their wares by expounding the benefits of limestone filtered water for use in whiskey. Both brands subscribe to the claim that Kentucky established itself as the bourbon capital due to its plentiful natural supply of limestone water. The limestone water was seen as optimal for whiskey production as it is rich in important minerals like magnesium and calcium, while also being low in levels of iron. This is all well and good but what they don’t tell you is that these factors are more important when it comes to fermentation waters, not as much for proofing water or the couple of drops of H20 that you add to your whiskey to “open up the aromas” or “break up the alcohol”. 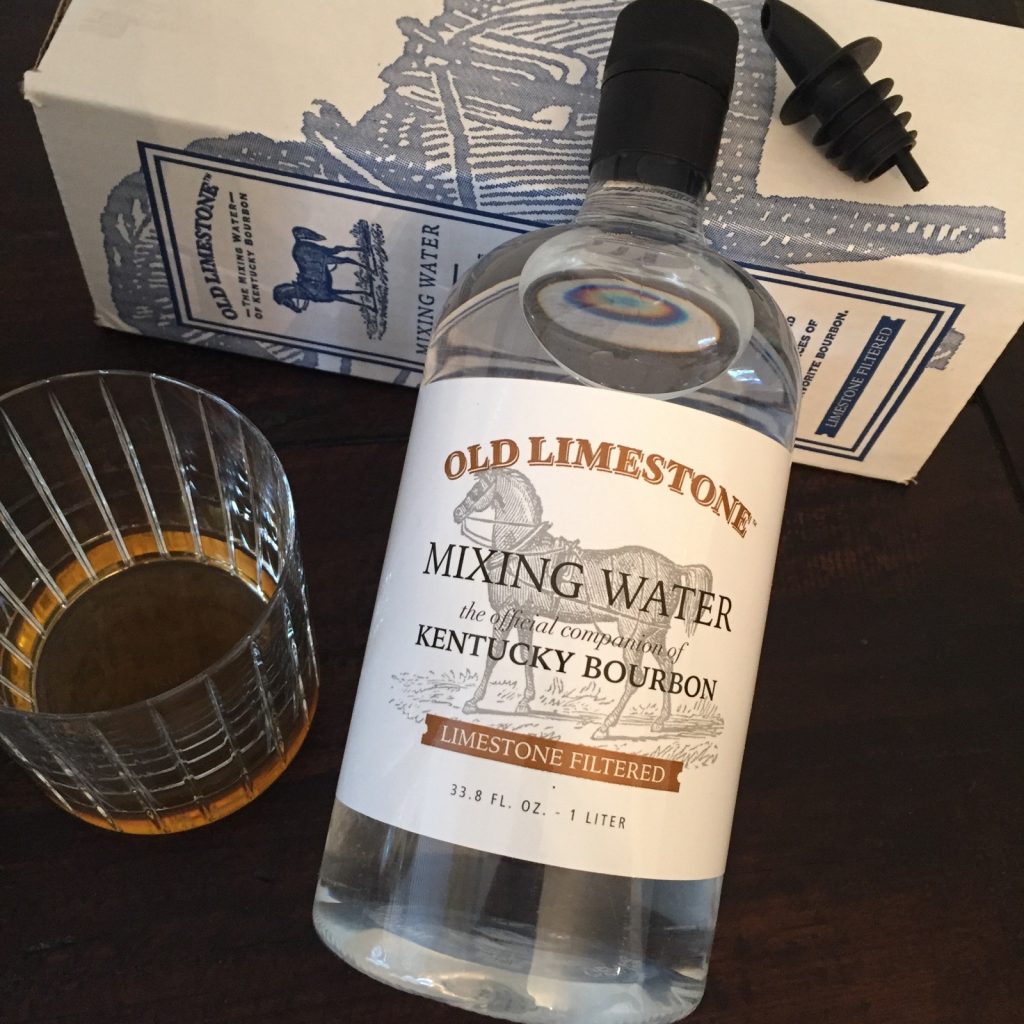 Some distillers may in fact favor limestone water for whiskey production because calcium can serve to lower the pH of the mash and aid starch degrading enzymes, while magnesium can improve yeast performance and metabolism. However, once the whiskey has been fermented, distilled and aged, these minerals do not contribute these same effects. In fact, many Scottish distilleries subject their proofing water to various treatments and filtering methods in order to minimize levels of cations (which magnesium and calcium are both classified as) before using it to dilute their whisky.

Now some people may interject here and say that limestone water tastes “sweeter” due to the presence of cations like calcium, and therefore makes for a nice pairing with their bourbon, and I won’t present too much of an argument to that as it’s a personal preference. But even in that context I will say that I’m not so certain that the Widow Jane Distillery’s claim that their water is even more saturated with minerals than water sourced from Kentucky is a thing to be touting. Too much calcium and magnesium can turn a pleasantly “sweet tasting” water to a metallic and bitter tasting water. Moderation in mineral content is probably the best approach for proofing water, but I’m neither a chemical engineer nor a distiller.

The Widow Jane Mine

In September of 2014 Chuck Cowdery, a celebrated American whiskey writer, discussed Widow Jane bourbon in two separate blog posts. In the second of such posts, which was cleverly titled ‘Wherein We Mine More Facts About Widow Jane’, he addressed the claim that the water used for the bourbon is sourced from the historic Widow Jane Mine, which is located on the Snyder Estate. Through some impressive investigative work, Chuck refers to an illuminating articlefrom Blue Stone Press published in 2013 which discusses how the previous owner of Widow Jane Distillery, Daniel Prieto Preston, became enchanted with the historic Widow Jane Mine and subsequently adopted its namesake for his bourbon. By the way, there is also an excerpt in the article wherein Mr. Preston discusses how this limestone water produced excellent results for their yeast when used for their other distilled spirits, as they do distill some spirits in-house.

The Snyder Estate, along with the Widow Jane Mine, is owned by a not-for-profit organization called the Century House Historical Society. In his blog post Chuck points his readers to the comments section of this Blue Stone Press online article where you will find a statement left by the CHHS, that was signed off by their Board of Trustees, clarifying that the bourbon’s “water was not supplied by the historical society from the Widow Jane Mine for this endeavor.” Further they state, “The historical society has no commercial relationship with Mr. Preston and his manufacture of Widow Jane whiskey, and CHHS does not benefit in any way from the sales of this product.” Interesting…

It appears that Mr. Preston bought the historic Dewitt Estate, which has access to the canals and several of the limestone mines bordering the Snyder Estate. Per the Blue Stone Press article, “water from several sections of the local mines flows and even bubbles up into springs on Preston’s property.” After spending far too much time combing through numerous reports and studies over the geology and hydrology of Rosendale (while concurrently Googling more definitions, illustrations, and maps than my brain could hope to fully digest and retain), both the Snyder Estate and the DeWitt Estate appear to occupy space within what is called the Kingston-Rosendale Karst Aquifer Region. To put it simply, this is a region containing many limestone landforms (such as springs, caves, and mines) that provide direct passages for groundwater to reach the land’s surface. The Kingston-Rosendale Karst Aquifer Region is very complex and therefore details such as aquifer recharge points, discharge points, and interconnectedness of the groundwater in the region are not fully known. Additionally, much of the mining activity that occurred in the previous two centuries has artificially integrated a number of aquifers in the region. In essence, while the distillery may not literally draw their water from the Widow Jane Mine, the source of the water supply on the DeWitt Estate is likely the same.

As 4-5 years has elapsed since the release of both the Blue Stone Press article and Chuck Cowdery’s blog post, and as the Widow Jane Distillery has come under new ownership during this time, I contacted the Century House Historical Society to inquire if this relationship has since changed. I received a very prompt and friendly response from the President of CHHS informing me that “Widow Jane Whiskey has never been made with water from the Widow Jane Mine” and that “There is no financial relationship between Samson & Surrey (nor was there with Cacao Prieto) and the CHHS.” 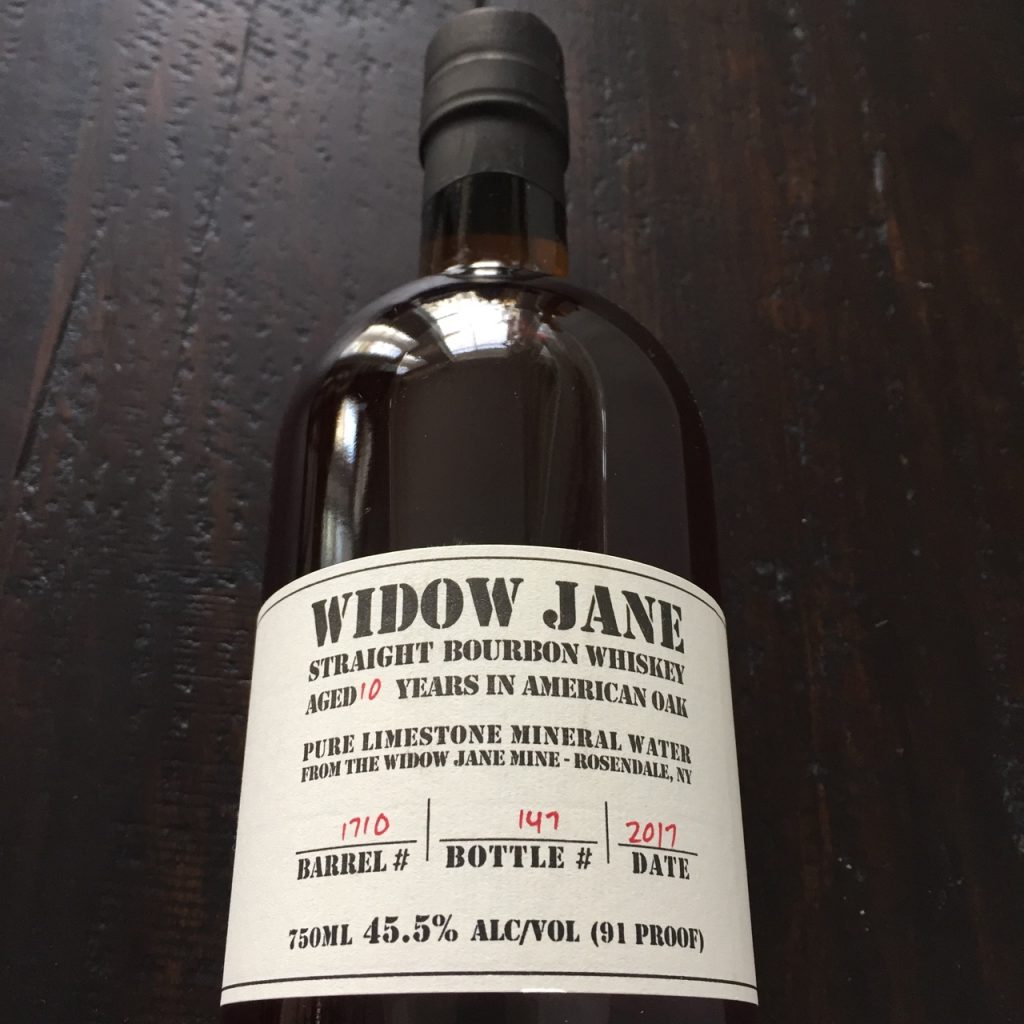 Color (sorry Malt people but I’m going with the ‘Murican spelling here, sans ‘u’): Dark golden brown Baltic amber. There is discernable cloudiness that would lead me to believe it is non-chill filtered, although neither the bottle nor the website indicates this.

On the nose: Vanilla, apple, honey, sweet corn and a bit of lemon peel and acetone on the initial sniff. Caramel, brown sugar, and toffee notes make a faint appearance once the bourbon has set a little.

In the mouth: Surprisingly silky mouthfeel with only a mild, quickly dissipating twinge of heat.Vanilla, corn, burnt sugar, honey, and a little rye spice. It provides a short-to-medium astringent/tannic finish that leaves behind cinnamon, oaky dryness, pepper, and orange peel. I wasn’t terribly fond of the finish.

Limestone water be darned! These magical waters did not prevent me from feeling like paying 70 USD was too much for this fairly average bourbon. Since this purchase I’ve been continually brooding over some of the more enjoyable bourbons I could have purchased for less money. On the whole, the presentation was fairly subdued. I wouldn’t ascribe the words “thin” or “light” to the Widow Jane 10 year bourbon, but I also wouldn’t say it’s a robust bourbon either. If you had been toying with the idea of purchasing this bourbon, might I instead suggest buying a true Brooklyn bourbon such as Kings County (which retails at approximately half the price of Widow Jane) and donating the remaining 30 or so dollars to the Century House Historical Society?