Milestones seem ten a penny nowadays, easily hyped and latched upon by marketing departments. However, a fiftieth seems a summit well worth celebrating. That’s what we’re going to do in this feature as the classic Gordon & MacPhail range turns exactly that in 2018.

Back in the 1960’s, the whisky world was mainly focused on blends and the single malt market was fairly minor. George Urquhart saw the potential in establishing a range of single malts from a variety of distilleries. This would offer enthusiasts from across the world, the opportunity to explore the best of Scotland and identify their own unique characteristics. George went so far as to select the entries himself from the Gordon & MacPhail inventory. Needless to say, the Connoisseurs Choice range after 5 decades harbours delights from the established giants of whisky to the overlooked and now sadly departed distilleries. It serves as a gateway to the past and what arguably we have lost in today’s modern and sterile environment of computerisation and efficiency.

Yet the only way to celebrate the range and answer this time conundrum is to experience the whiskies for yourself. To sit down with a selection of old releases and then pitch these against more recent exponents. Only then can we categorise what we’ve lost or gained in equal measure. Only then can we ascertain the impact that the Connoisseurs Choice range has had across the generations.

The other question is what for the future of the range itself? The competition is fierce even for an established brand and since the 1960’s, Gordon & MacPhail has moved with the times and introduced a series of new ranges to accommodate changing tastes. Has the market grown weary of the Connoisseurs Choice or has it become tired itself? Should it now serve a new purpose for a well experienced and growing market of whisky enthusiasts, or be merely content with offering those initial baby steps to newbies seeking to explore the wealth of distilleries that Scotland has to offer? All food for thought however at this moment in time we’re here to explore and also celebrate – where else to start but at the beginning? With some of the more historical releases, then deleted editions before venturing into the current era.

Of course, the range has been in the news recently with Gordon & MacPhail revealing a revamped approach. The whisky drinker is now better informed and educated than ever before. To some, the Connoisseurs Choice range had become irrelevant and overlooked. A sad state of affairs as alongside the Flora & Fauna range, both showcase an assortment of ignored distilleries and their own individual styles. Connoisseurs especially offered value and consistency with various ages and editions being bottled. The new look takes a step into the single cask market whilst still offering vatted offerings. This unlocks the cask strength dynamic and ultimately a higher price for a more natural state experience. A new discovery range is to be revealed which may form the basis of an entry-level offering to those only just beginning in whisky and Gordon & MacPhail are set to revamp their distillery label and Private Collection ranges in due course.

Time never stands still in whisky and whilst we may be losing the approachable and consistent style of the Connoisseurs Choice range. There are countless expressions out there that should keep us entertained for decades to come. We have 9 examples lined up so let’s get on with it!

Bottled in 1995, this 23 year old was harnessed at 40% strength from a lost distillery.

On the nose: this bursts out of the glass with persuasive aromas. The juicy meadow fruits are almost intoxicating. Plump raisins, a light sprinkling of cinnamon, a slight well-worn varnish that has been rubbed down over the years intermingling with the wood host. A bit of chalk towards the end and clay aspect. This Coleburn is very interesting even at this lower strength.

In the mouth: arguably not as focused as the nose, this feels more leisurely. That initial fruity sweetness with apples and a touch of grapefruit soon evaporates. More raisins, cinnamon bark, vanilla pod and an oaky dryness towards the end.

Bottled in 1991 at a minimum 40% strength this style of distillate is sadly no more.

On the nose: very wood-driven with that approachable Speyside slant. Honeyed with sliced apple and cinnamon. Tinned pineapples add some refreshment with vanilla icing and a buttery legacy.

In the mouth: very different, actually quite light and with a tropical coconut vibe. There’s a creaminess present – peaches and cream – with marshmallows and pears. Good use of the wood here. This doesn’t need water with honeycomb, black pepper and right on the finish a touch of varnish and a tinge of alcohol.

On the nose: interesting, strangely sugary sweet but at the same time a stewed quality. Almonds, raisins, syrup and that overriding sense of age heightened by a dusty aspect. Yes, more vanilla and pencil shavings before we step into some subtle oak spicing with cardamon.

In the mouth: very gentle, almost underpowered in reality but its a different style compared to what we are used to seeing nowadays. A subdued maltiness, caramel but a lovely caressing finish. Vanilla marshmallows, cigar smoke and oddly a waxiness. It’s a happy and reserved whisky, not booming from a distance or grabbing passers-by.

Of course, it’d be extremely rude not to take in a couple of the current releases in the Connoisseurs Choice range. Along with a couple that have since sold out.

This Mannochmore was bottled in 2015 at an approved 46% strength.

On the nose: very inviting with toffee arrival with a hint of cinnamon and all-spice. Freshly spun cotton sheets and a light floral nature. There’s freshly mashed ginger root and follow but it’s the fruits that dominate with pears coming through strongly. Water reveals more of a lime zest refreshing aspect, a creaminess and a mineral element but summed up as talc.

In the mouth: very well poised and confident. An emphasis on caramel and milk chocolate, the apples return with some white pepper on the finish. Water I felt has to be used sparingly, more green apples, fresh lemon, vanilla and almonds appear.

This Tormore was bottled in 2015 at an approved 46% strength and will set you back around £60.

On the nose: a balanced arrival with pears, apples and a dusting of cinnamon. The freshness of vanilla, grapefruit and lemon peel with some mandarin segments.

In the mouth: gloriously fruity and juicy. More of those grapefruits but not joined by mango and coconut towards the finish. A real citrus vibe takeover. More orange flavour and a buttery flapjack. All-spice, courgette and a certain greenness prior to the finish. Odd, but enjoyable.

This Aberfeldy was bottled in 2013 at an approved 46% strength from a sherry cask.

On the nose: bursting with zing featuring apricots, honeycomb and an oily quality. A little sweet tobacco in the glass, caramelised apples, roasted peanuts and a touch of sweet cinnamon. A lovely assured nose.

In the mouth: more of those summer vibes with golden syrup, honey, a rich buttery aspect and a twist of lemon. Very pleasurable. Ideally pitched at 46% and I felt water wasn’t necessary. A touch of cigar smoke towards the finish, crushed almonds, shortbread, walnuts and red apples. A lovely balance and very engaging.

This Arran was distilled in 1998 at an approved 43% strength.

In the mouth: slightly mouldy initially followed by custard creams and honey. More of those oats again, a little cinnamon and milk chocolate. Inoffensive but not hugely developed and yet at the same time quite relaxed. Water overall didn’t really deliver any tangible benefit apart from revealing more chocolate.

This Glendullan was distilled in 1997 at an approved 43% strength before being bottled in 2011.

On the nose: quite spirity with pine nuts, resin, vanilla pod and lemon peel. A touch of soap towards the end alongside sherbet, coconut flakes and lavender honey.

In the mouth: in a word a little dull and fiery. Even at 14 years of age, there’s not much definition or progression on the palate. It’s fairly rudimentary stuff with a coarse vanilla, honey, Rich Tea biscuits and porridge oats with a splash of syrup that brings a brief burst of sugary sweetness. On the finish a cheap milk chocolate.

This Tomatin was distilled in 1988 at an approved 43% strength before being bottled in 2007.

On the nose: more winey initially with a slight dirtiness as well that moves into breakfast tea leaves and wine gums. Tinned peaches, pineapple and apples bring some refreshment. Very malty followed by vanilla bark, marzipan, fudge and toffee. An odd plastic note as well – a perfectly acceptable presentation.

In the mouth: rugged but a pale shadow of what it might have been at 46% strength but still distinctly different from the others here. A little rough initially, haggis almost with spicing and the black pepper. More oats and a flat lager characteristic. With water a black breakfast tea blend, raisins and some figs. A little chalky towards the finish and some mocha coming through.

The oldies do steal the show ultimately but I really enjoyed the approachability and engagement of the Aberfeldy 1996, which at 17 years of age or thereabouts was a lovely dram whatever the occasion. Oh Glendullan, how you continue to avoid detection and the Arran is ok, which given my experiences with this distillery is high praise. The Tomatin reminds me to drop by the distillery again in a couple of weeks for a bottle-your-own and ultimately to spend more time with the distillery. Yes, its hard to keep up with everything on all fronts but we are trying here at Malt.

The Connoisseurs Choice remains a useful tool when seeking to discover whisky in all its depths and varieties. Even to the casual fan, you can pick out differences on the nose as well as the palate. The fact that these are all generally approachable and upon release relatively affordable, makes the range all the more rewarding.

These samples were acquired through various means whether at retail or via the Dornoch Castle Whisky Bar or Carnegie Whisky Cellars. 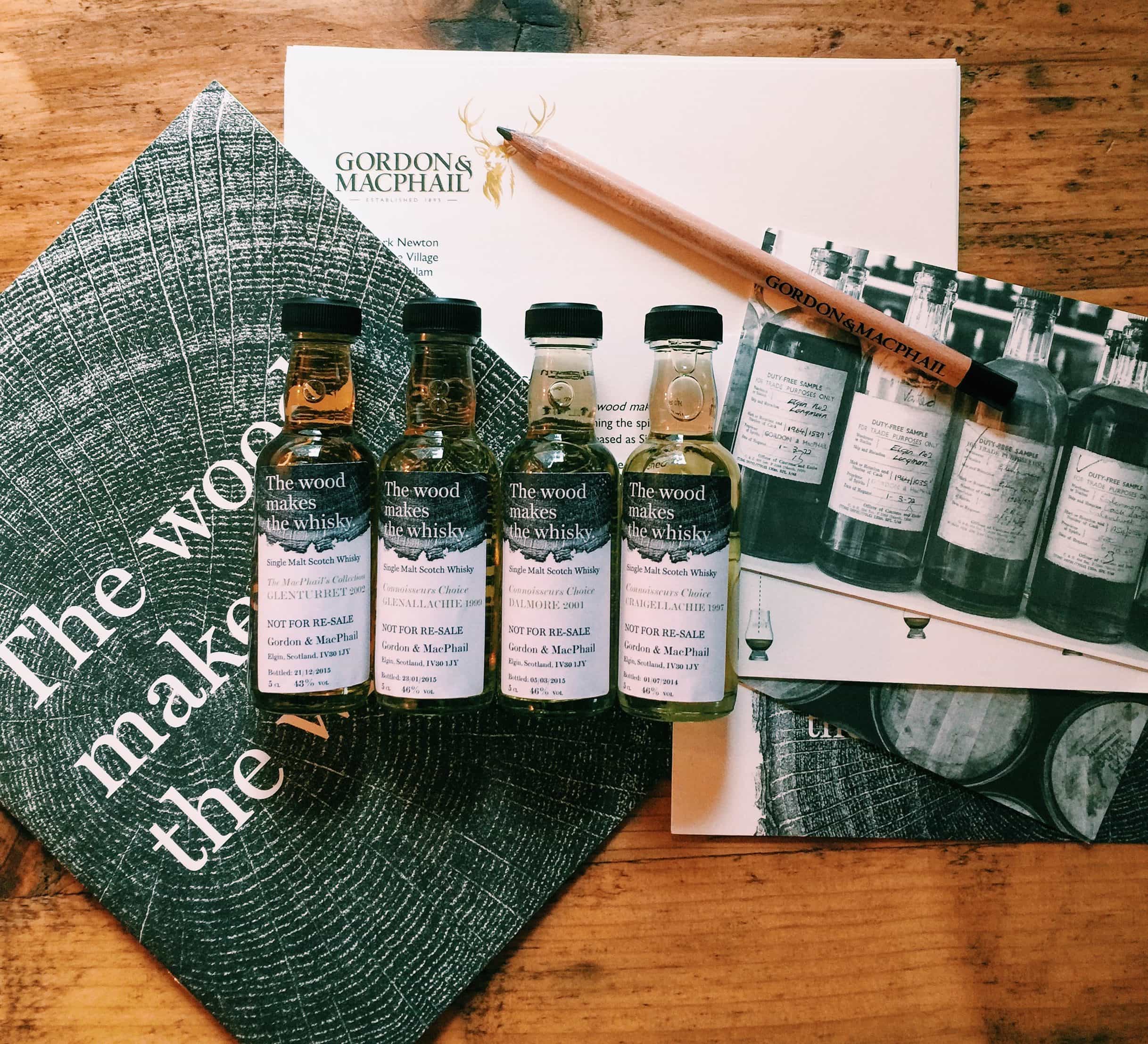