I wish Arran had a longer fermentation time. It’s 52 hours which – incidentally – is about half the length of the time the island’s brewery takes, and isn’t enough time to let secondary fermentation really kick in and cause all sorts of wonderful flavours through assorted lactobactillacaea.

Oh, I know they were after a “Speyside” style. (Not that such a thing exists of course, and even if it did, the fact that an island 200 miles from Dufftown made the same sort of thing ought to put the final nail in whisky’s regional flavour coffin.) But a longer fermentation would make their base spirit more interesting. More characterful. And it wouldn’t stop them from creating sweetness and light ad infinitum through their stills, should the fancy take them.

Anyhow, these thoughts have been bouncing about my brain because a few weeks ago I was on Arran, doing my level best to pretend that the technological revolution never took place. It’s where I used to spend family holidays way-back-when; 1991-dated photos show the infant Wellsy swamped in a parrot towel (which I still have somewhere) and my cousin Justin and I thought it was high time we popped back to see what had changed in our 10-year-or-so absence. And to “do” Arran our own way. Which, it turns out, is exactly the same way we “did” Arran aged 10. Except with trips to the pub.

Whisky is transportative. Yes it is. That’s not just some romantic fluff like the marketing myths strung together in Edrington’s fairytale factory. Quite apart from the various organoleptic triggers, certain distilleries or brands take on personal importance that goes beyond flavour; beyond “objective” quality. It’s all psychological of course; these whiskies don’t “taste” of that place; they don’t even have terroir the way that great wines do (yet). But we all have these brands that tug at our individual flinty heartstrings. Bunnahabhain 12 gave Mark his Eureka moment. Jason has his internet-baffling Tormore discipleship. And I have Arran.

I drink loads of Arran. Far more than of whiskies which I know to be tastier. Because when I drink Arran I’m taken there. Not to the distillery, but to the island. To hikes down Glen Rosa and lost jumpers up Glen Sannox. To Lochranza castle and the standing stones on Machrie Moor. To me it’s not about the “light heather honey”, or whatever it says on the tasting note. It’s about climbing Goatfell and kayaking down the west coast and turning 10 on Blackwaterfoot beach (and cheating at scavenger hunts). It’s Drumadoon and the King’s Caves and the ferry from Ardrossan and crazy golf at Brodick. It’s red deer and grey seals and golden eagles and basking sharks and a Mars Bar for whoever spotted the most of them (which my sister still owes me.)

We’re banging on the door of misty-eyed and mawkish here. Unheard-of for the Malt gang. The point – and it’s a risky point for a reviewer – is that these personal brands are important. Arran isn’t my favourite distillery. Springbank is. (We also dropped by Springbank on our trip, incidentally). But Arran scratches an itch for me that Springbank can’t. And that’s one of the joys of whisky. That, sometimes, it’s not just about the whisky.

Anyway, Justin and I visited the distillery (obviously) and decided it was only right and proper to buy a bottle together. After much sniffyness and elimination on my part we settled on the cask strength Machrie Moor, which is the peated whisky Arran makes (but will stop making once their new distillery at Lagg gets production underway). It’s about 20ppm pre-fermentation, cost us £49.99 and comes in at a chunky 58.1% ABV. (If the Arran distillery doesn’t happen to be just down your road it’s available for £52 online.)

On the nose: Gentle peat that largely sits aside to let soft green fruits take centre stage. Apples, pears, sweet limes (not quite the green fruit pastilles, but knocking on the door!) There’s a lift, almost of mint. A bit of soapiness and dairy. Not much of the cask.

In the mouth: Maltier. Surprisingly sweet and honeyed, and the booze is very well controlled considering the lightness of body. More of those juicy green orchard fruits with a dab of cream. Smoke curls in and out; the effect is of charred wood onto which barbecued meat has dripped its fat.

The holiday’s over; the brief plunge into Arran’s pseudo-reality well and truly in the rearview mirror. A week’s nostalgic return to childhood (albeit with pints) and now I’m back. Back to the nine to five that’s really seven to six. Back to shared accommodation and the M4 commute. Back to town centre grimness, water bills and worrying about platelets. Back to vitamin supplements, back to Starbucks coffee. Back to eating al desko, back to early alarms, back to Work In Progress meetings, back to more bad news about Brexit.

And back to Malt where, as is the lot of the reviewer, I must amputate all sentiment, and judge Machrie Moor against its peers.

It’s not pulse-raising stuff. It’s pretty simple and the oak is barely there, but it’s well made, decently priced and shockingly drinkable for the proof. It’s alright.

But do something this evening. Never mind what I say, or what Mark says, or what Jason says, or what the people actually paid to do this stuff say. Find yourself a glass, and pour yourself something nostalgic. Something perhaps that meant something long ago, before you obsessed over the latest Cadenhead’s outturn, or hollered on Twitter about provenance or bickered about craft vs establishment.

Just put all of that aside; shut down all critical inclinations. Give yourself a night off to remember why you gave a damn in the first place. Be transported. Reality can catch up with you again tomorrow.

But yeah. Wish Arran had a longer fermentation.

Image from The Whisky Exchange along with the commission link that goes towards ensuring Adam remains endowed with Arran whisky. 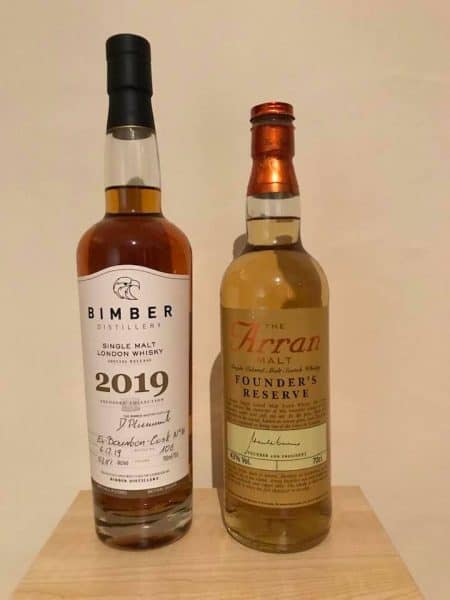 A pair of founders’ bottles from Arran and Bimber