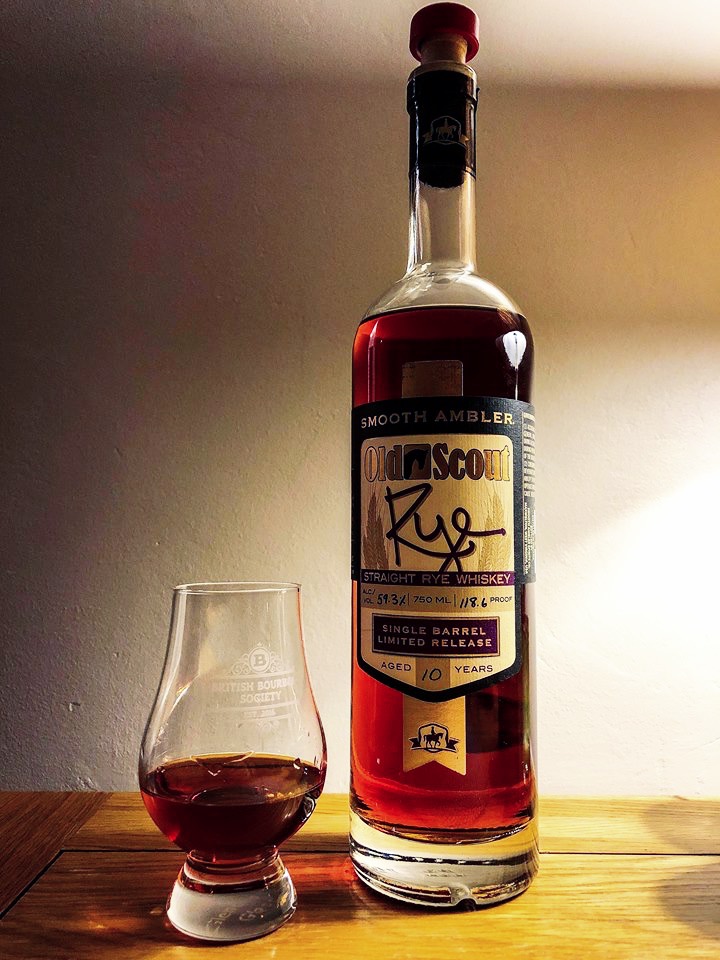 I’m in the middle of revision at the moment. And a play as well, though since the play’s a silly farce that doesn’t require much more than falling through a window and yammering gibberish in a fourth-rate Irish accent I can’t say it’s been much of a time imposition.

But the revision’s been killing me – twenty hours a week on top of work – which is why I’ve been rather quiet on the review front lately, and why (you’ll be glad to hear) this piece is going to be pretty short and rant-light.

We’re back in America again, as I scrap with Jason and Alexandra in our three-headed game of Malt Review Risk. My last outing was with the small-cask, crafty, flavour-bomb rye from Reservoir, and it’s another rye in the glass today: Smooth Ambler Old Scout 10 year old.

“Old Scout” is the brand name Smooth Ambler use when they’re bottling a whiskey they’ve sourced, rather than distilled themselves. No real issue there; Smooth Ambler are totally open about the sourcing, and it doesn’t take much digital legwork to establish that the whiskeys have (almost certainly) come from MGPI.

Better still, the Old Scout whiskies – whether in batch or single barrel form – are generally very smart buys indeed. They’re drooled over by the (many) ryenosaurs of the British Bourbon Society, and when they appear on UK shelves (the single barrels inevitably are only ever in London) they tend to sell out in minutes.

But that’s the case for rye of any meaningful age full stop these days. We’re longpast the time that dust-gathering rye could be found at stupidly good value just by walking into a half-decent whisky store. Prices are up, volumes are down. Nature of the beast, of course, but it means that any old rubbish with “rye” on the label can charge £60 – £70 – £80 a bottle, and sell out. Particularly when it carries a bit of an age statement.

This single barrel comfortably falls into the upper end of that price bracket. If not a smidge north of it. I can’t be sure, as I’m working off a sample from a generous friend. It’s 10 years old and bottled at a chunky-ish 59.3% ABV. Probably the MGPI 95% rye recipe, but that’s just an educated guess.

On the nose: Mellow, complex, nutty nose with the alcohol’s fierceness neatly reined in, given the proof. Candied almonds and walnuts. Loads of caramel. This may be a high-rye MGPI, but there are aspects that feel almost Kentucky bourbon-ish. A smatter of dill, menthol and earl grey, but they’re really just a background whisper. This is about the deeper notes. Seared orange zest and sandalwood. Strawberry laces.

In the mouth: Juicy, oily palate. More of the nuts and orange, and there’s some mature development to be felt too. Leather and cigar. That odd, bourbon-esque quality again – the rye grain itself is less overt than on the nose. Rounded, rich, dripping with caramel and nutmeg. Spices keep things balanced and lively. Booze, again, is well in check.

Where the Reservoir was an exuberant explosion of flavour, this is complex and cruising. Wingback chair whiskey. Loads of classic flavours, even if some of them feel more corny than rye. That’s the idiosyncrasy of single barrels for you.

Just a pleasure to drink really, as Smooth Ambler’s Old Scout barrel picks more or less invariably are. I suppose the burden is now on them to make sure the quality of their own-distilled whiskey comes up to snuff. Their in-house rye hasn’t been released in the UK yet, but an under-the-counter taste at last year’s Whisky Show gave me great cause for optimism.

In the meantime I recommend you buy any Old Scout Rye you can find. And if the distributors wouldn’t mind letting stores outside London have a few bottles once in a while I’m sure loads of us would be super-grateful.

Bordering on rant territory there. Better get back to the books.

Thanks very much to my BBS compadre, Ed, who furnished me with the sample and the equally excellent photo.