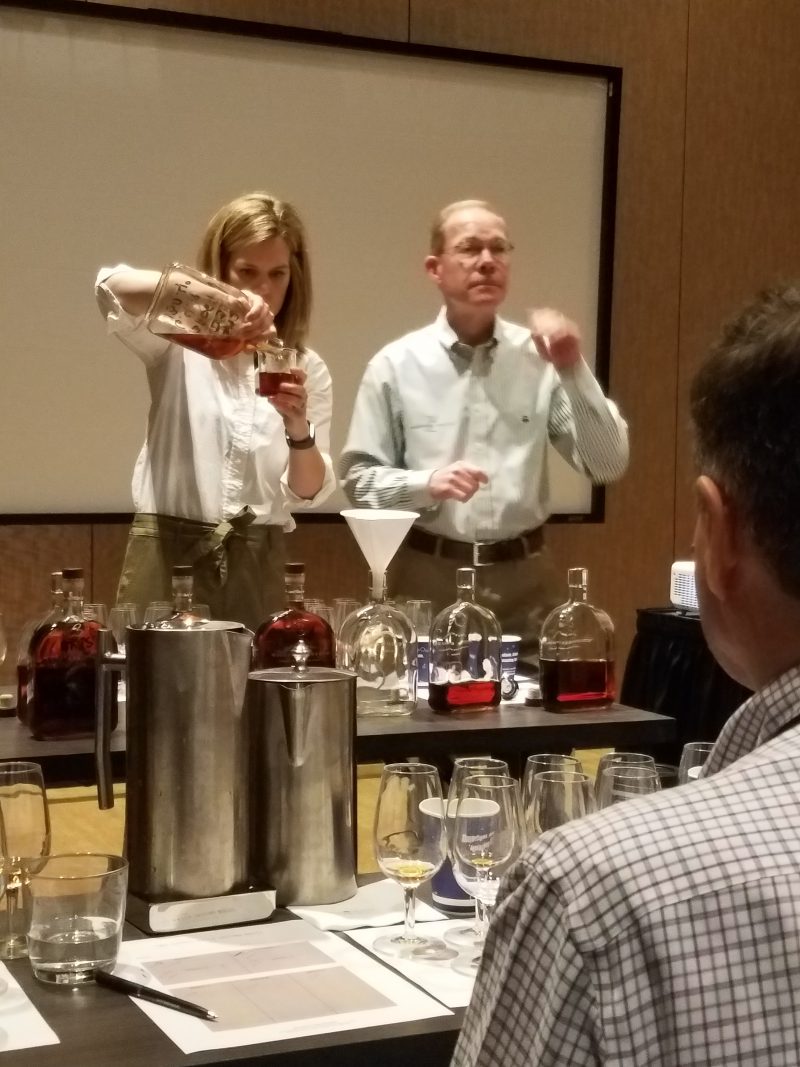 The week prior to the Kentucky Bourbon Affair I had told my fellow Maltsters that I’d write an article at its conclusion to recap the event, and that if I drank too much, blacked out, and had no memory of the affair, I’d just make up a whole article’s worth of material. Now that I am safely home from the KBA I can report that I was fully conscious throughout the entire week of activities, although I did nearly pass out when I saw the “festival bottling” prices, but more on that later.

Firstly, to introduce those not familiar, the Kentucky Bourbon Affair is an annual week-long “Bourbon Fantasy Camp” organized by the Kentucky Distiller’s Association. I can just envision cranky pants Jason rolling his eyes at the following KBA promotional verbiage:

As we all know, Kentucky has perfected the timeless art behind this mellow, amber nectar – and the Kentucky Bourbon Affair™ is the only place where you can experience its elegance first-hand. 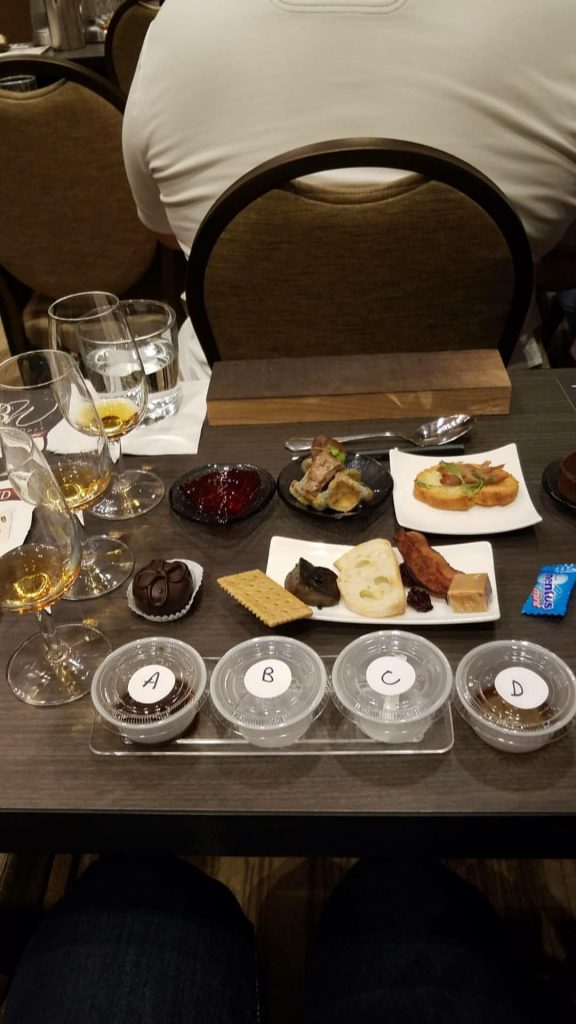 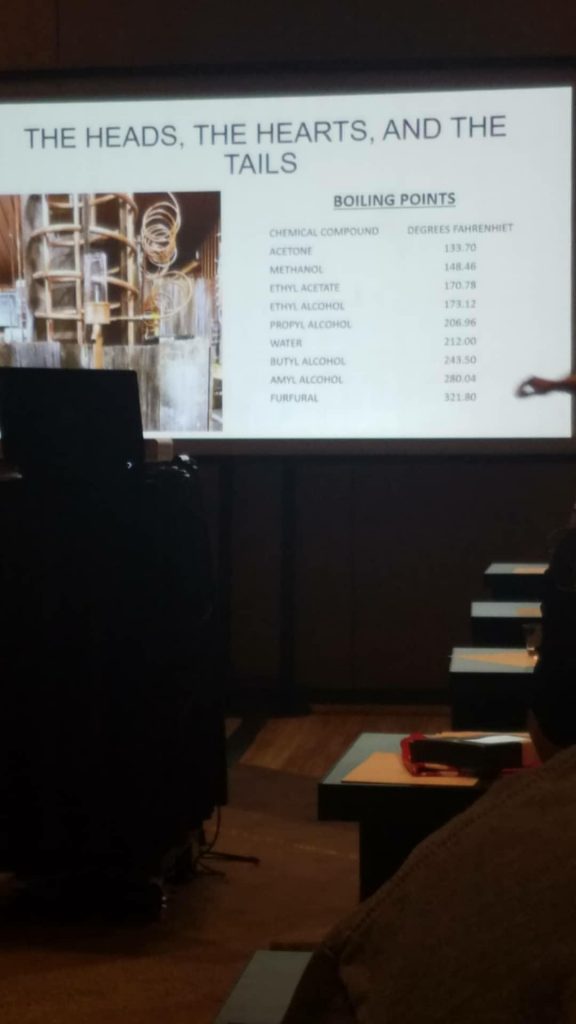 Monday through Friday’s itinerary was chock full of primarily distillery hosted events, and offered activities such as private barrel selections at Knob Creek, Four Roses, Larceny, and Wild Turkey; tours of the new Bulleit, Rabbithole, and Old Forester distilleries; dinner at the home of Heaven Hill’s Max Shapira; a Four Roses batch mingling; and a trip to the Maker’s Mark distillery to learn about their popular oak finishing process. These were just some of the events on the schedule and there were evening outings offered as well, but as I’m essentially an old lady trapped in the body of a 27 year old, these dinners were uncomfortably past my bedtime. Master distillers, brand ambassadors and many other big-name personalities were involved in every event and attendance was kept small which ensured that each excursion was highly interactive. Participants were not simply talked at, but given the opportunity to perform many of the same tasks a distiller finds himself/herself doing every day. 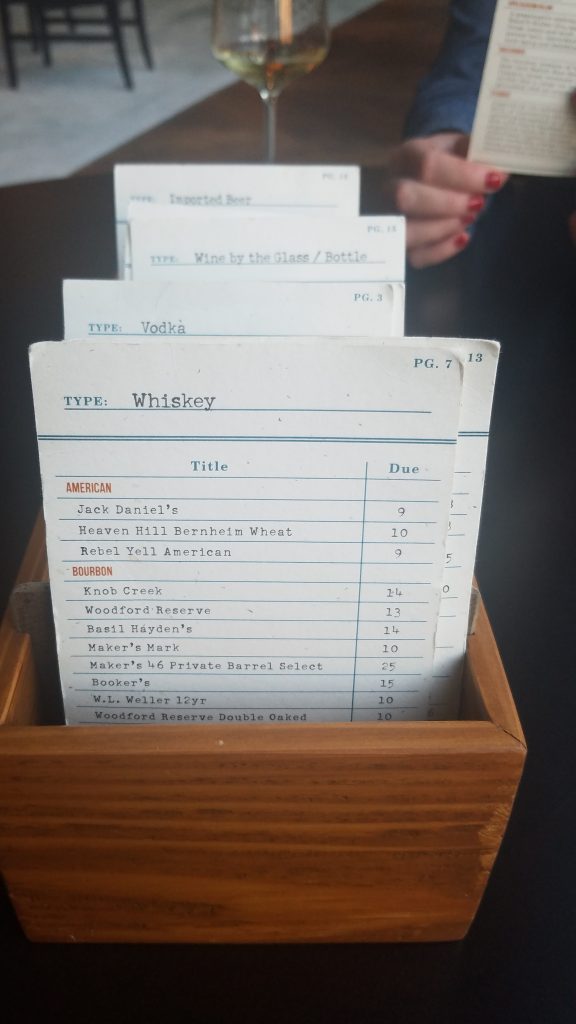 In most cases, you walked away with a bottle or two of whiskey as part of the experience. You would also likely find yourself rubbing shoulders with a number of popular whiskey journalists (i.e. Michael Veach and Fred Minnick), bloggers, and podcasters. I mean this in the most literal sense. A friend of mine found himself serving as a pillow to a very sleepy editor of a certain whisky magazine on one bus ride. I will admit there were a few bourbon “influencers” I was introduced to that I did not recognize, but as I didn’t want to injure egos, I pretended to be familiar with their content.

Admittance into these events could be bought a la carte at the price of $150-185 apiece, or, if you happen to be a fancy pants high roller, you could pay $1900 for the ‘Golden Ticket’ option which granted you access to 3 daytime distillery events, 3 evening events, and admittance to the High Proof Expo and the Angel’s Fare. 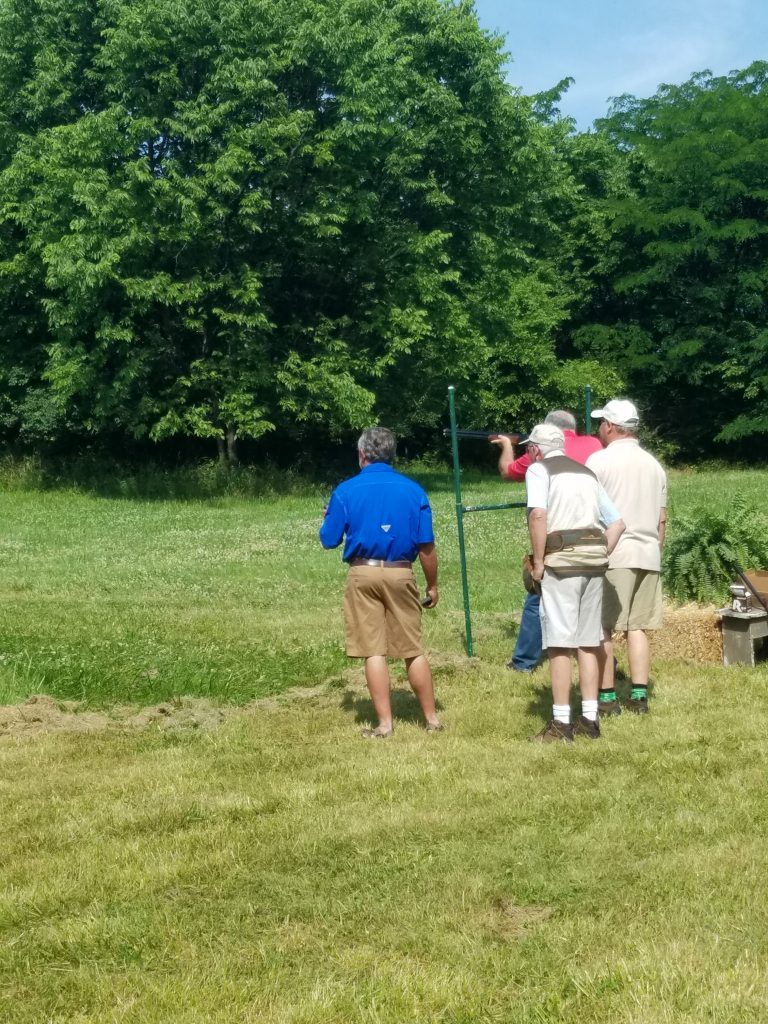 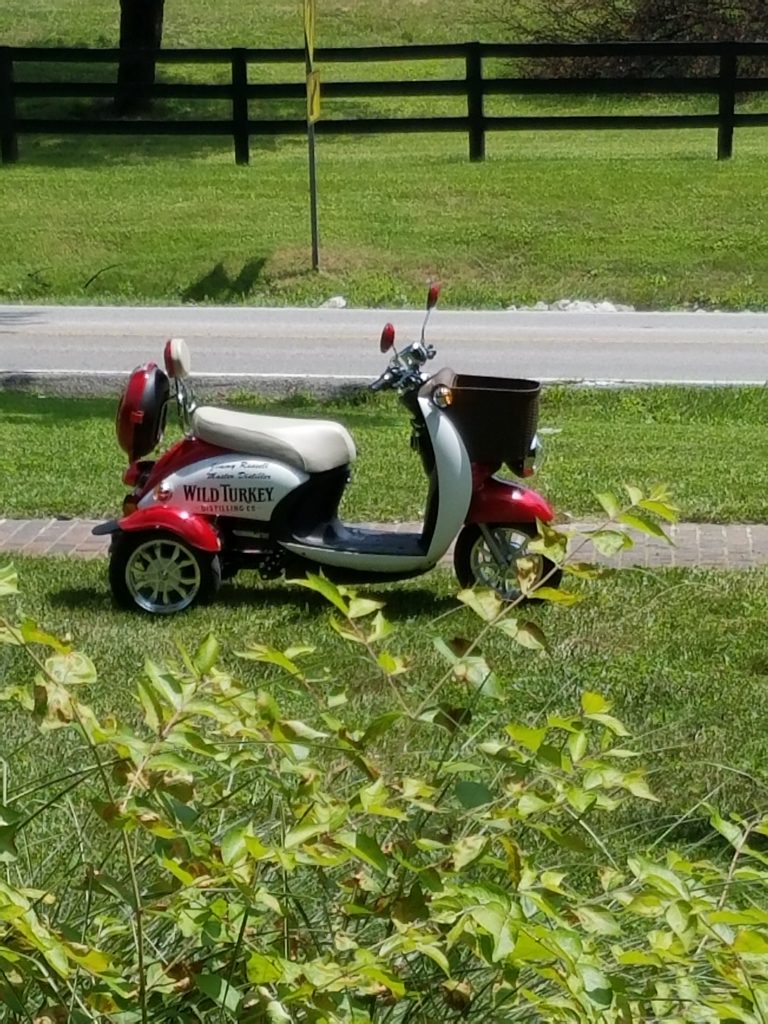 One of the daytime distillery events I signed up for, which had deservedly received high praise in prior years, was the Wild Turkey Barrel Proof Sharpshooter Challenge. Transportation to the offsite events was provided from the host hotel, Omni Louisville, to the respective distilleries, and for this particular event I had to wake up at the butt crack of dawn. And by butt crack of dawn I mean only 8am, but still…

After an hour-long ride, our bus pulled up to the Wild Turkey visitor center and none other than revered bourbon legend and former Wild Turkey master distiller Jimmy Russel was standing there to greet everyone as we exited the bus. We were taken directly to an area that was arranged as an outdoor shooting range, and where the current master distiller and son of Jimmy, Eddie Russel, gave a welcome and introduction to the day’s activities. Necessary safety briefings and instructions were given prior to shooting and each station was manned with veteran shooting pros, ensuring everyone had one-on-one attention. Your not-so-humble author would like to add that she did pretty well for herself on the range and even won a little prize. 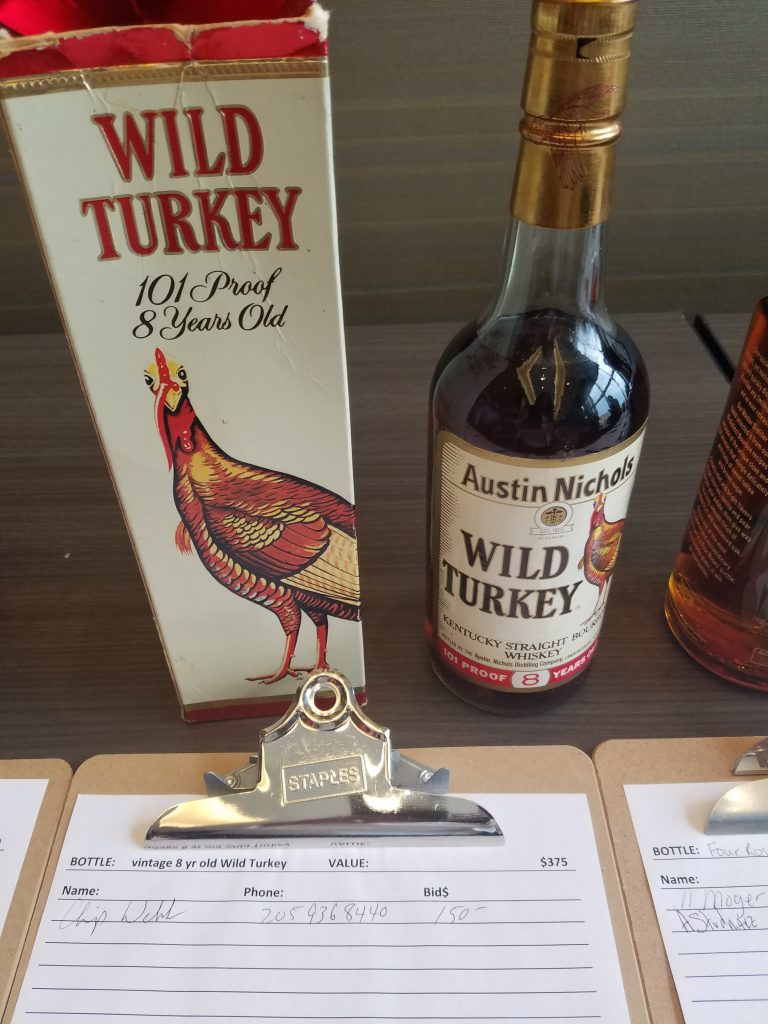 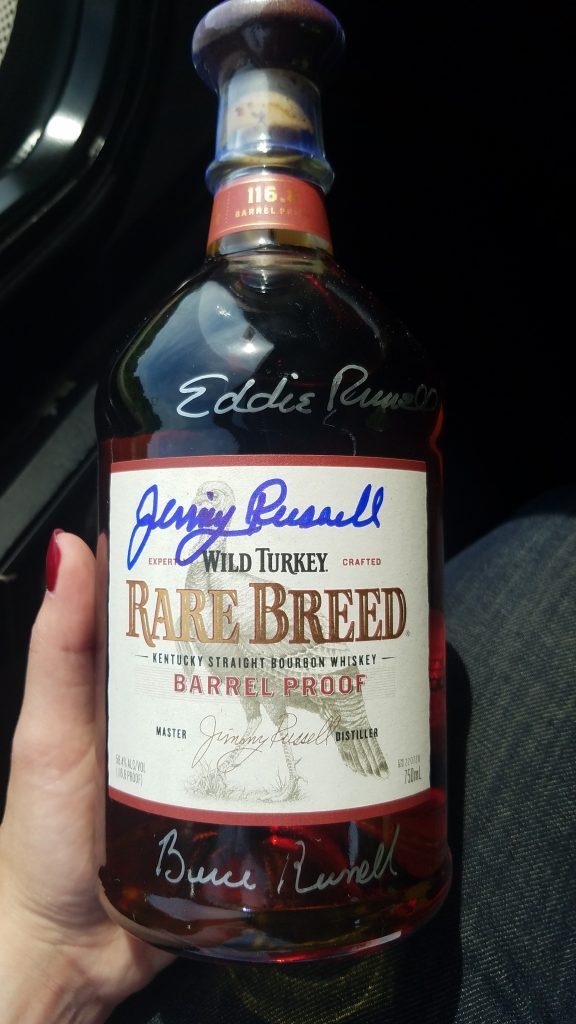 After approximately two hours of shooting clay pigeons, or for some of us, attempting to shoot clay pigeons, we were escorted to a small building and directed to form four-person teams for a blending challenge. Bottles of 6, 8, and 12 year distillates were placed in front of us alongside a bottle of Wild Turkey’s Rare Breed. Our task was to blend the 6, 8, and 12 year old samples in order to recreate Rare Breed as closely as possible. Once all blends were completed both Eddie and Jimmy went to testing the blends themselves and once again your not-in-the-least-modest author would like to brag that our team, which consisted of the only 2 women at the event, won the blending challenge. You may now call me Master Blender Alexandra, please and thank you.

Still feeling pretty smug from the blending victory, we headed outside where lunch had been arranged and then onto a distillery tour given by Eddie Russel himself. On the short bus ride to one of the rickhouses I found myself seated next to Eddie’s son, Bruce, and as can be expected of my awkward self, I said not a thing.

While reflecting on the bus ride back to the hotel, I will say I was incredibly impressed by how engaging the entire day had been and how Eddie and Jimmy participated alongside us in each and every activity. 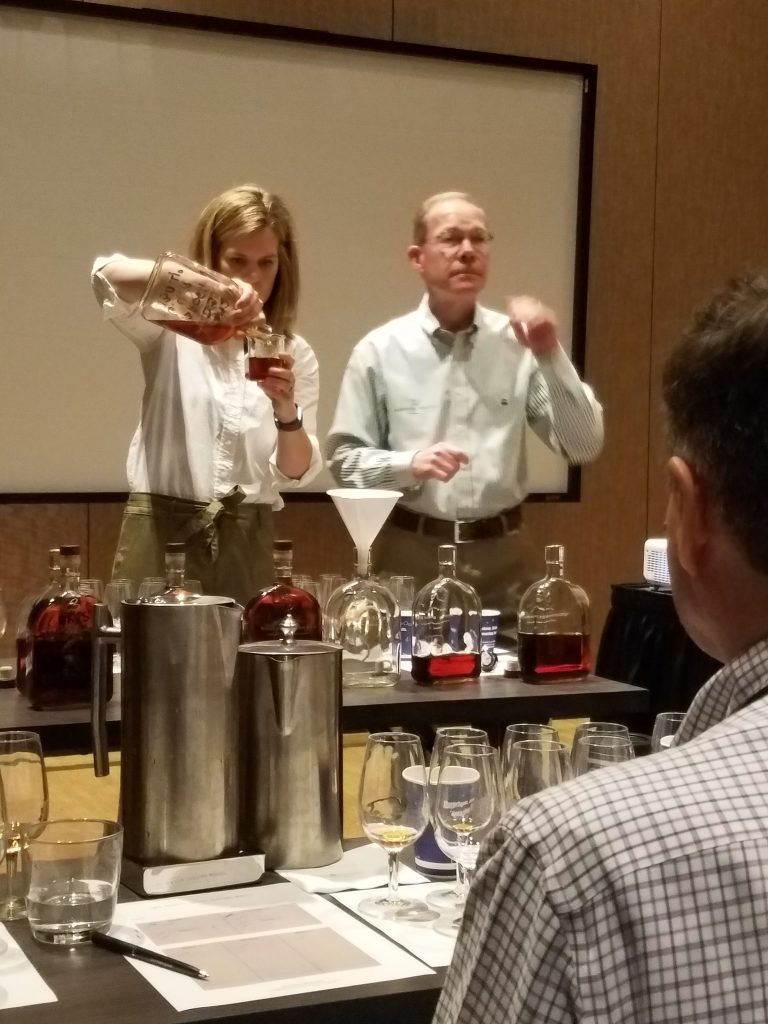 Saturday morning started out with the Higher Proof Expo in which everyone chose four educational, workshop-type sessions. My first session was led by Chris Morris, Woodford Reserve’s Master Distiller, and Elizabeth McCall, Assistant Master Distiller, and covered the process of batching. Everyone was presented with four very differing and distinct single barrel, cask strength samples of Woodford reserve which were placed in contrast to Woodford’s flagship expression that you would find on store shelves. The dilemma of achieving consistency when working with such unique barrels was apparent to everyone during this exercise.

As a class we voted to eliminate one of the four samples, leaving three samples left to create three two-batch blends (#maths). While I enjoyed this session and felt that Morris and McCall were excellent hosts, I did not enjoy the gentleman (I use this term liberally) behind me who felt the need to loudly proclaim at every possible moment that both the distillers and the other participants were wrong in their tasting notes and preferences. Personally I felt he could do with a good punch in the nose but I had to settle with giving him a withering, over-the-shoulder, Medusa worthy glare. No one came here to hear your non-value adding, dickhead commentary you stupid, self-important, no-name catch-fart. *clears throat* Anyway, moving on.

My other three sessions included an overview of the microbiology and biochemistry of bourbon production, “dissecting” barrel flavors to create bourbon/food pairings, and a history of the use of pot distillation with a thumper for moonshine. Each session was legitimately informative and led by knowledgeable, competent hosts. The second half of Saturday; however, was a bit lacking in comparison. 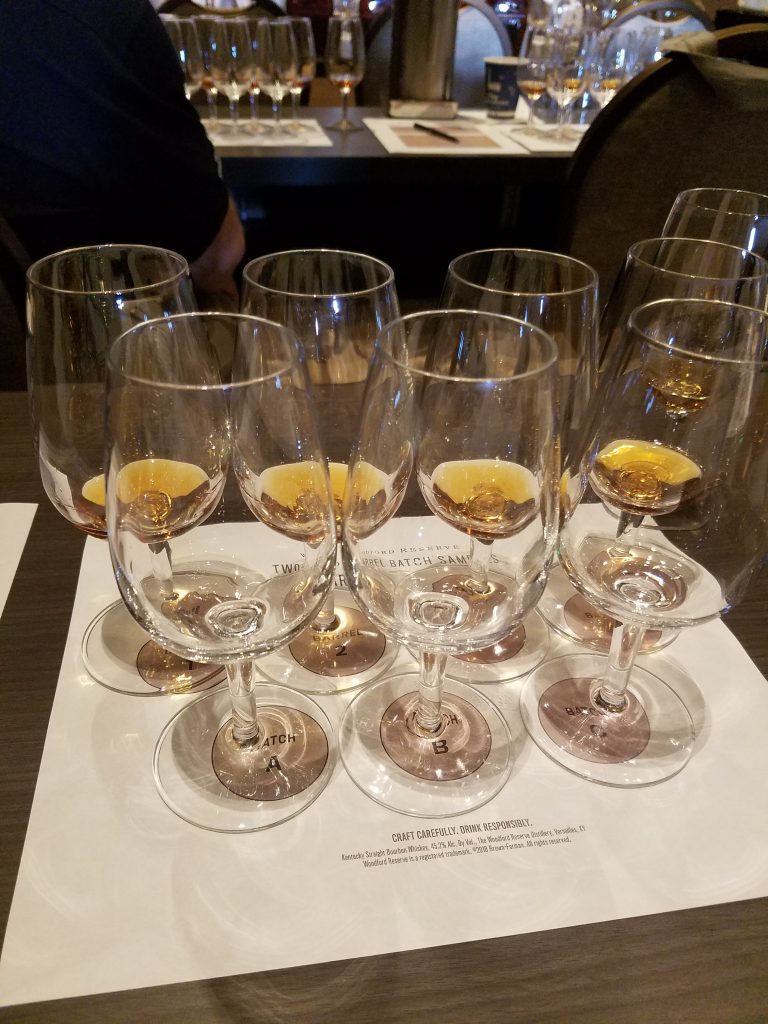 After a brief rest in my hotel room, I found myself back downstairs, this time for the Angel’s Fare which promised “culinary delights”, vintage bourbon tastings, and the “opportunity” to purchase single barrel expressions of five whiskies selected by “a panel of Kentucky Bourbon Hall of Fame Legends”. Upon entering the ballroom where the event was hosted we were given sample tickets and a price sheet of the single barrel selections and OH MY GOD WHAT IN THE HELL ARE THEY THINKING ASKING THIS MUCH MONEY?! Apparently the proceeds went to charity, but goodness me! And if you think those prices were high you should see what they were fetching on the secondary market mere hours later. 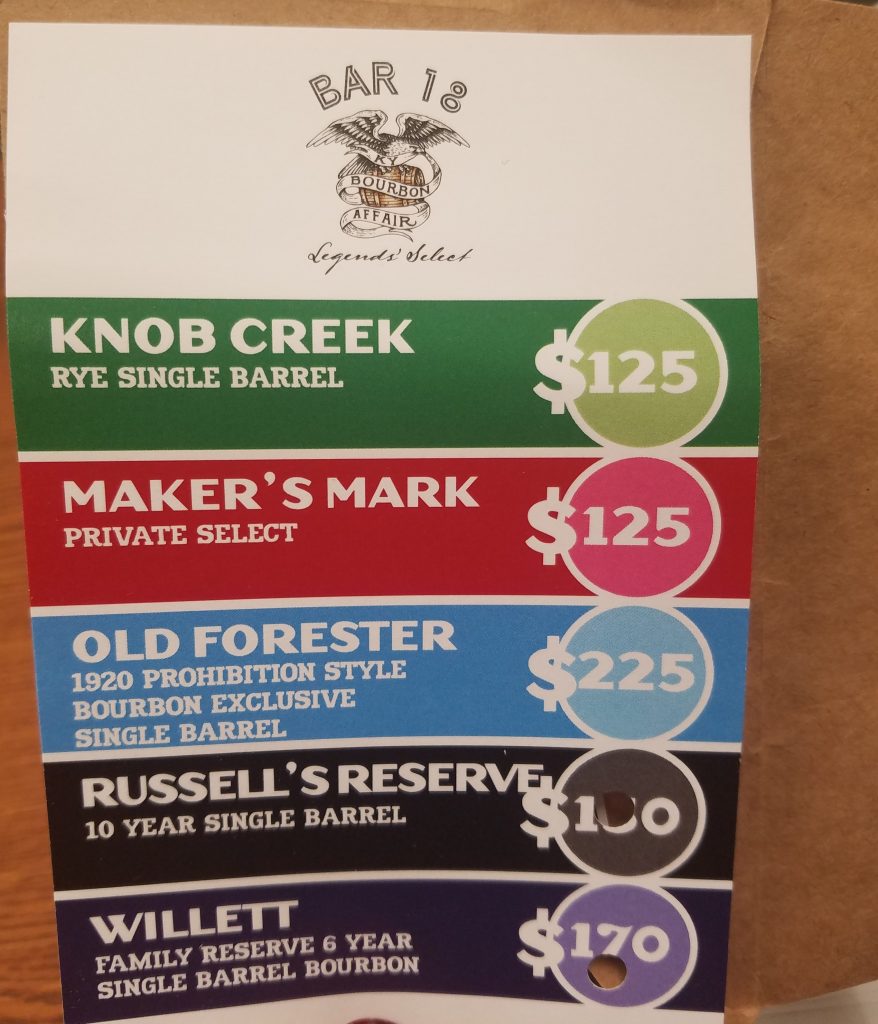 Tony (@glassofwhiskey86) and myself went almost immediately to the selling booth and already the Old Forester 1920 (the one I wanted most) was sold out, which still perplexes me as there was a one bottle per person limit enforced. Another bummer, you were only given tickets to sample two vintage bourbons. The main selling point for the Angel’s Fare for me had been the vintage bourbon tasting and I was disappointed that I didn’t get much of an opportunity to do just this.

Despite this small disappointment, my opinion is that the Kentucky Distiller’s Association did a heck of a job with organizing the Kentucky Bourbon Affair and I fully intend on being back next year. But next go around I’ll forgo the Angel’s Fare and pick up a distillery event or two in its place.

We’ve reached November and this is my first Tweet Tasting of 2016 organised by the Whisky Wire. These events can offer a snapshot of a..