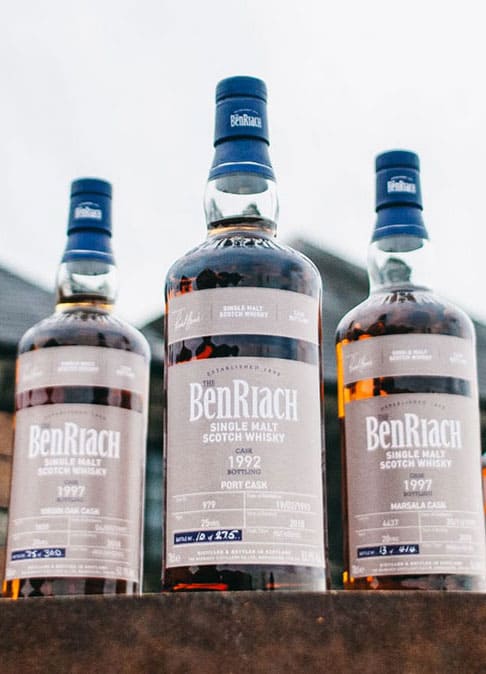 I mentioned, not too long ago, that there seemed to be a lot of BenRiach whiskies coming out when another busload of them arrive at Malty Towers. Sample bottles swarm across my dining room table like old ladies at a cake stall, jostling for my attention, intimidating in their own special way.

This time, however, the sheer volume of releases can be excused, for this is Batch 15 of BenRiach’s single cask releases, in which there are 17 expressions of BenRiach single cask whiskies, in a variety of different cask types. 17!

The youngest whisky in the new range is a 9 year old peated Port pipe release; the oldest is a 26 year old Burgundy barrique. What more can we say? Well, with the 9 year old clocking in a £80, they’re a license to print money.

My only quibble initially? Yes, yes. The price, of course. There’s at least a 20% premium on the bottles since the last wave. In fact, last time a 10 year old in Batch 14 would set you back about £65. The owners have hiked up the price because they can get away with it – and they probably will.

Yes, we don’t have to buy the stuff, except that we do. Because whisky drinking is pretty much like having a flavour-based cocaine habit. We are coke broke. Our houses are being remortgaged and our children ushered into coal mines in order to fund our lifestyle. You’re laughing on the outisde, but crying on the inside. We’ll put up with it. Bash out an angry tweet maybe, to make ourselves feel better. Vow never to buy a bottle again! Alas, we’ll come crawling back to the whisky shop the next day, cap in hand…

Today I have 5 samples from BenRiach’s latest wave of single cask releases, not all 17. That would be madness – my liver would go on strike. So without much preamble, I delve into the range Serge style and let a torrent of tasting notes wash over you all. 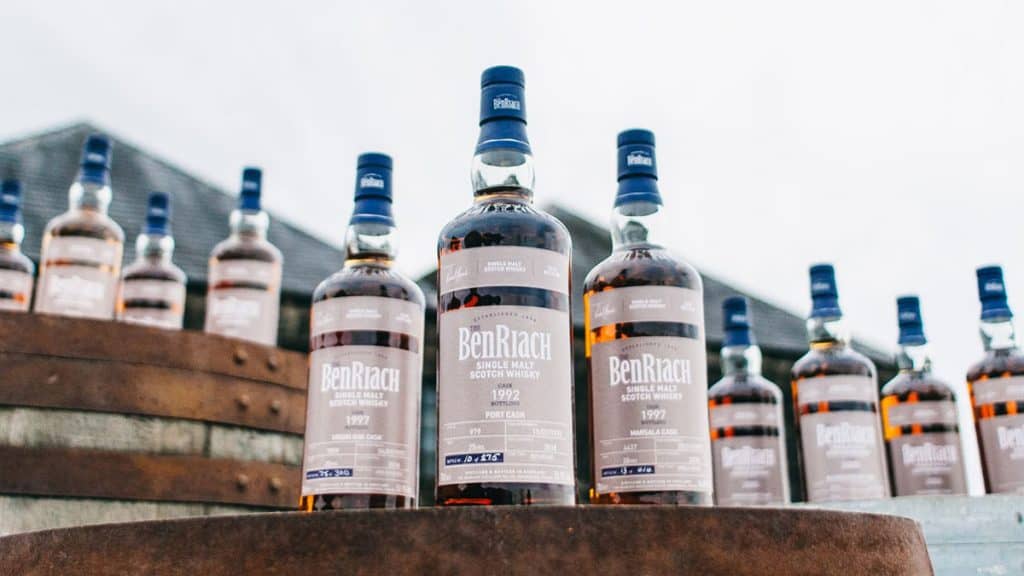 On the nose: cereal, nutty qualities to start. Slightly yeasty, sawdusty, baked earth notes. Once that settles a lovely sweetness drifts through (more so when the glass is agitated though), and up wafts syrup, orange marmalade, stem ginger, apricots.

On the nose: weirdly similar. A lovely balance between dried, husky, earthy notes and the sweet. Red fruits take over, filling this glass: strawberry jam, that sugary sweetness of macaroons. A little green tea and honey.

In the mouth: lovely rounded texture, and approachable for the ABV. Sickly sweet with maple syrup, strawberry jam again, slightly plummy. Some acidity, like that little bit of red wine that you find in the bottle a week later. Water somehow takes the fun out of it.

On the nose: peated! Forgot about that. Not a sweet peat: ashy, more tea-like, with notes of smoked salmon. Beyond that sit the port notes: the rich, black fruits, a touch of elderberry. Heather honey lingering out there too. Some old cellar notes: ever-so-slightly musty.

In the mouth: fun! Pretty much what you’d expect: a mashing up of prickly, ashy, slightly savoury peat, with plum jam. Hoisin sauce. Lingering beats of sundried tomatoes, tobacco, heather honey, ginger and cinnamon. A bit blunt, as port casks can be, but a riot of flavours with the peat.

On the nose: This one has far more high notes than the others. It’s brighter, sweeter, more restrained. Apples, honey, a little toffee. Salted caramel. Pears in syrup. Grapefruit. Melon. Mango. In the distance, straw, hay barns, dusty.

In the mouth: Doesn’t feel as though the wood has done that many favours. Certainly plenty of difference though. Baked apples, grapefruit, golden syrup. Salted caramel again. With time some nice huskiness, malted milk biscuits, malted barley. Some ginger and black pepper on a slightly astringent finish.

In the mouth: very silky and the most elegant of the lot by a country mile. Strawberry jam. Lightly toasted. Again, those more typically sherry cask European oak notes manifest; plenty of sultanas and raisins. Dried cranberries here too. Nutmeg, honey and black tea on the finish.

One of my fears when starting to taste all of these single cask BenRiach whiskies was: are they all going to be a bit similar. But no, they’re not – not even close. With the peated twist and the varied cask types, there’s enough here to eradicate any notion of a distillery style. Pick any one of these – they’re a delight. Pick two to enjoy the radical differences. Bravo to variation.

Because I, personally, celebrate differences; I’m not really interested in consistency in whisky. To want something the same batch after batch, you might as well just drink Coca-Cola, stay only in a Premier Inn, and eat only at Harvesters.

Call me a snob, I dare you. But that’s no kind of life for me. 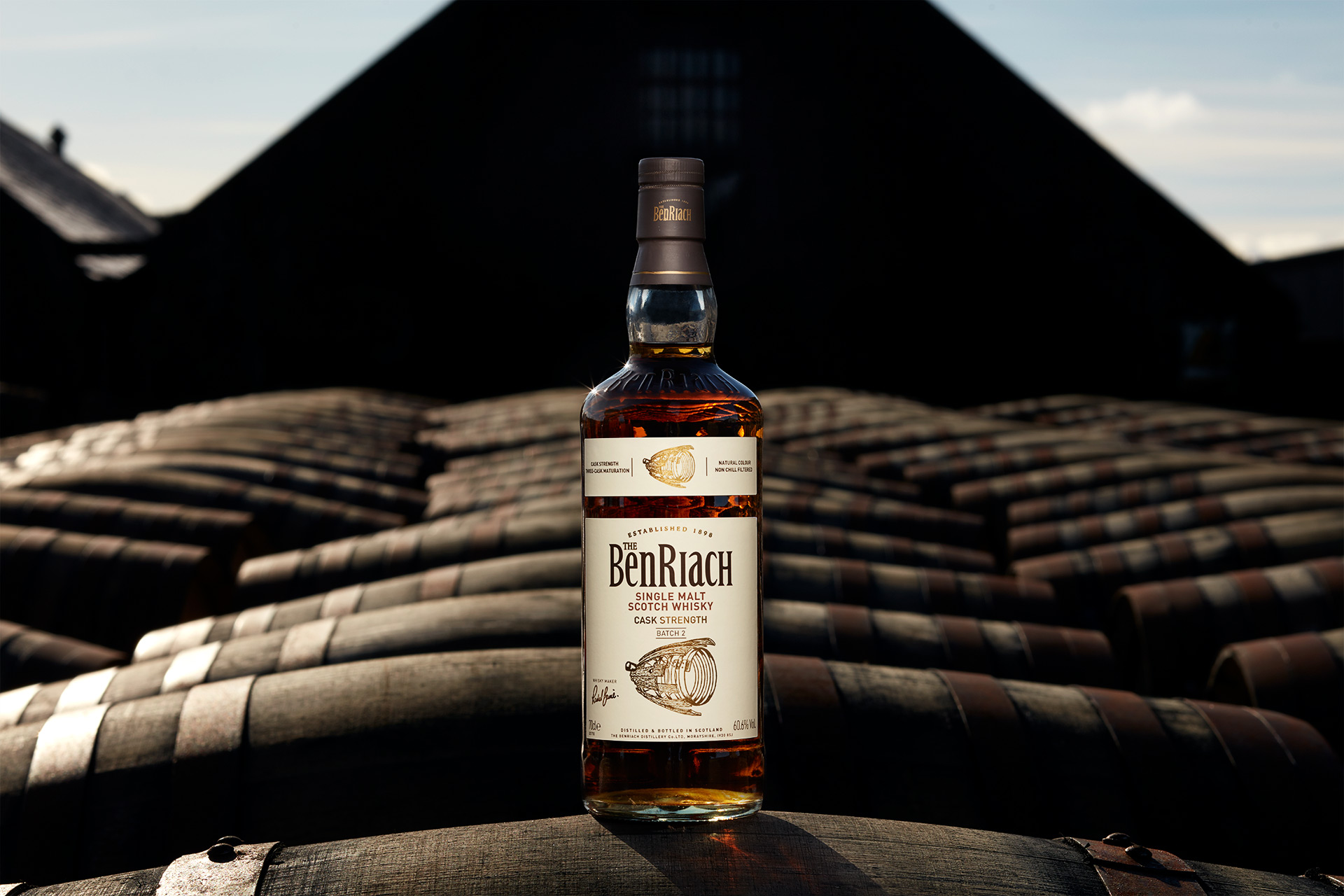