I don’t know if it’s just me getting older or my online association with JJ (aka Captain Cranky amongst the Malt inner circle) that’s making me get a bit Victor Meldrew but I’m finding that social media is just a bit draining at present. Not necessarily the content but just the sheer amount of it. Between Facebook, Twitter and Instagram it’s just a constant bombardment of information that at times can seem overwhelming.

Due to the amount of information available, it can be a struggle to find the bits that are genuinely interesting and useful especially when you are battling to be engaged with all the various formats in the first place. Happily, though I did stumble across a post that piqued my interest early on August 1st. Fellow Ireland based blogger, Omar Fitzell (@thatsdramgood), put up a post on Twitter of a new Bushmills Distillery Reserve release exclusive to distillery visitors. This was impressive as Omar is based near Cork, just a mere 323 miles from Bushmills. Honestly, I think this man has everyone involved in the Irish whiskey industry tapped up!

Anyway, with this newly gleaned piece of info that to me was indeed interesting and useful I swung by Bushmills to grab a bottle. Thanks, Omar for costing me more money!

Now in certain quarters, it may seem that I have an agenda against Bushmills. I can assure you that this is very much not the case. Yes, I don’t think the Red Bush is up to much and its existence still leaves me a little nonplussed. Yes, I was a little scathing of the Bushmills in disguise that is the Quiet Man 12 year old. But just to balance things out a bit I do love Bushmills Black Bush which I think sets a very high standard for any blend especially at its price point and I’m also quite taken with the Bushmills 10 year old single malt. Hopefully, this proves that I’m not all evil and on a mission to destroy Bushmills.

The thing is I’m only voicing my opinions and as my palate is unique to me I am obviously not speaking for everyone when I write a review. You are more than entitled to disagree with me, and often people do! Recently I was made aware of a local whisky enthusiast and collector who bought the Kilkerran 12 year old off the back of one of my reviews and he hated it… saying that, he thought I was overly harsh on the Strathisla 12 year old. Maybe that says it all! (I’m joking of course) But that is the beauty of whisky. Individual palates, tastes, likes and dislikes.

The only real issue I had with Bushmills was with the single malt range. I have always felt that they are hamstrung by the choice of presentation. Enthusiasts really love to see non-chill filtration, no artificial colouring and an abv at least 46% to really let a whisky speak. Sadly, Bushmills in their current core range eschew all those preferences, to their detriment in my mind.

So I was delighted to see with the release of this limited edition Distillery Exclusive that they chose to go with at least 2 of the preferable presentation options – non-chill filtration and a higher abv of 47%. There is no mention of it being natural colour so I will assume there is some e150 in there but judging by the colour it hasn’t been heavy handed… no Bowmore Black Rock here.

The contents then in the bottle were distilled in 2008 making it a 10 year old although the bottle bears no age statement. Its comprised of 60% charred bourbon cask matured spirit and 40% sherry cask matured spirit that were then vatted together and matured for an extra year in Acacia barrels, which I believe is a first in Ireland and possibly for any whisk(e)y producer. Something not likely to be seen bottled in Scotland but of course the Irish spirit laws only states that whiskey must be matured in wooden barrels rather than specifically stating oak.

Acacia has been used as cooperage for sweet and white wines for many years in France, Italy and Spain but is probably championed the most by American wine producers especially for white wines such as pinot blanc and sauvignon blanc, some wineries are experimenting with Riesling and Chardonnay too. Why? Apparently, Acacia highlights the fruit and floral compounds without the sometimes excessive vanilla and tannins of oak.

Let’s see how this extra maturation as affected this Bushmills then.

(As a side note, I bought this bottle at the Bushmills Distillery shop where you will part with £74 if you also wish to purchase one and there are only 12,000 bottles… minus this one obviously!)

On the nose: The traditional Bushmills notes of peach, apricot and melon but all amplified with a little banana thrown in too. Then it becomes a little green and leafy with cut grass and some herbaceous notes. Sherry notes start to pick their way forward, cream, almonds, milk chocolate & beeswax. Water brings forward more sherry influence, more chocolate, cinnamon and pastel de natas.

In the mouth: Immediately I’m struck by how oily it is in the glass, especially compared to the regular Bushmills 10 year old. That translates to a medium mouthfeel on arrival. Honey, vanilla, malt which then becomes more sherry forward – sherry soaked raisins, almonds and then a wave of prickly spice. Cinnamon and nutmeg very apparent. A shortish finish where chocolate develops with citrus oils, orange moving to tangy lemon. Water makes it a bit more winey, more chocolate, wild honey and a healthy amount of warming baking spice and angostura bitters.

You know what, I actually rather like this. What part the Acacia had to play is hard to tell. Did it help improve the mouthfeel and structure? I’d say it was the non-chill filtration and higher abv. The nose is definitely a fruit bomb until water is added when the sherry comes to the fore. The palate, on the whole, is a bit more sherry driven but it isn’t a sherry bomb per se.

Personally, and I can’t believe I’m saying this about a Bushmills which are normally hydrophobes, a little water benefits this whiskey immensely and time to really open up. It’s actually a well-balanced drop, plenty of flavour but maybe about £10 too expensive if I’m being picky.

If this is how Bushmills are moving forward then I say all power to them. Keep it up!

I was very interested to try this one largely because it would be another example of Acacia maturation for me to try. Although this is finishing, rather than what I would call maturation – at least two years – I have tried a young spirit in the Waterford Distillery cellar that has been fully matured in an Acacia cask. It’s bonkers, though starting to grow on me. It’s also perhaps a better example of Acacia maturation, as this spirit has been put into two different cask types beforehand – usually a warning sign that the spirit is flawed or the maturation wasn’t very good the first time. Let’s give it a go…

On the nose: a slight industrial heft that I’ve noticed in a lot of Bushmills spirit of late – not a bad thing, just worth noting. Table polish, the woodiness is there. Old pencil boxes, school desks. Sandalwood. Dried fruits first: raisins, sultanas and the likes, with some underlying vanilla. But there’s a massive floral sweetness, jasmine, honeysuckle, honey, that harmonises the bass Bushmills spirit.

In the mouth: echoes the nose perfectly, but that higher ABV and really rounded texture makes the flavours very enjoyable indeed. Dried fruits again, heather honey now, vanilla, apricot sweetness with black tea (Assam). Tobacco. A hint of heat: coriander, chilli pepper. In fact, roasted peppers, slightly heady with a herbal quality lingering. The only sour note is that the floral sweetness on the nose never fully manifests, and instead there’s a lingering woody bitterness – bitter rather than tannins – on the finish.

This doesn’t have much Acacia influence – it is finished, after all, but what’s here manages to elevate the rather basic Bushmills spirit, that’s danced around a few barrels, and actually makes it work. It’s very, very pleasing – and there’s a lot to be said about these kinds of whiskies. The fact that it comes at a proper ABV, as Phil points out, brings even more enjoyment to it. (40% ABV whiskies, which are chill-filtered, should be avoided at all costs.)

Oh, and if this was less than £50 it’d be knocking on the door of an 8/10. As it stands, a firm 7, which is much higher than I ever thought I’d rate it. I have to agree perfectly with Phil on this, which pains me greatly. 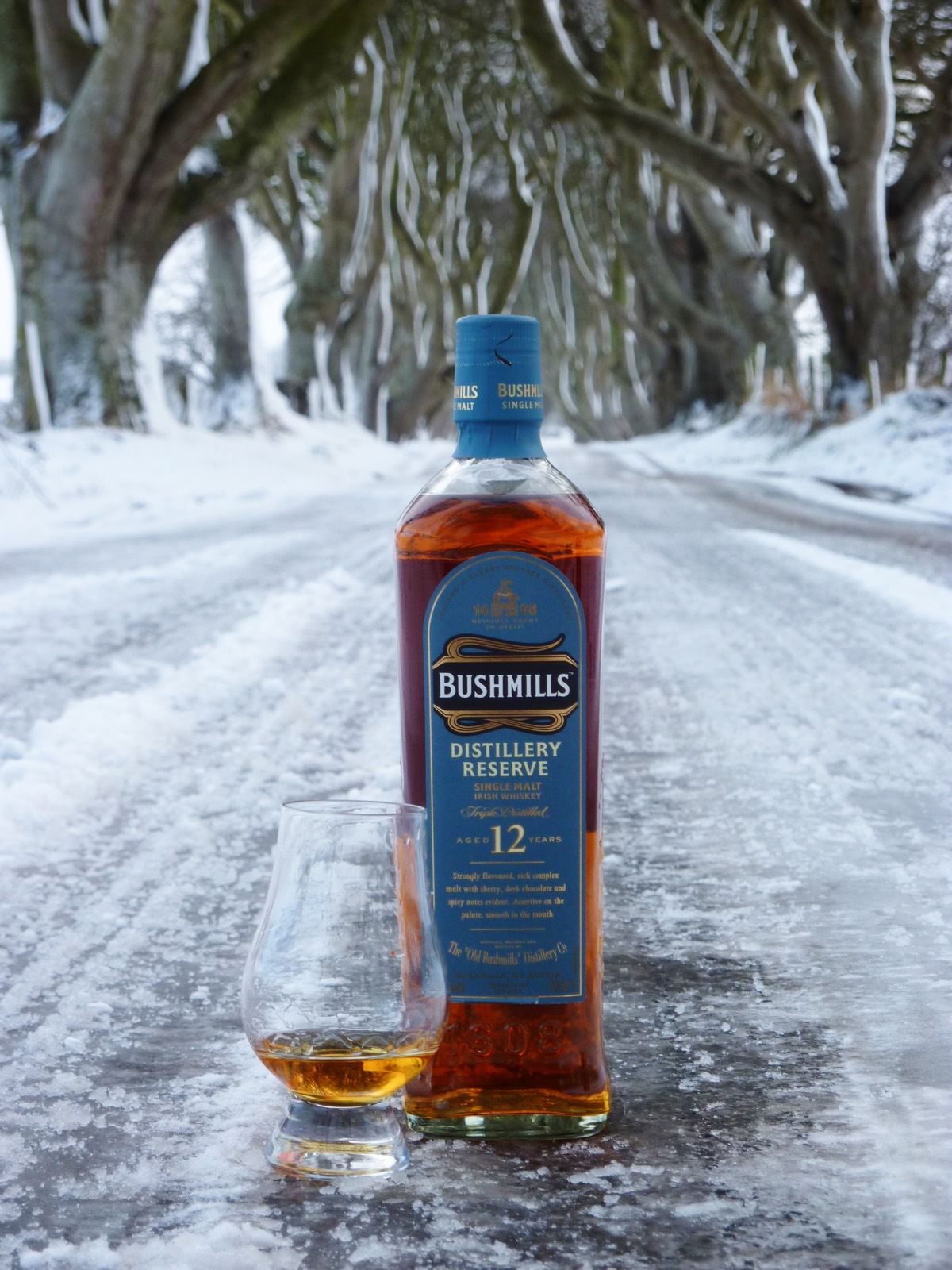