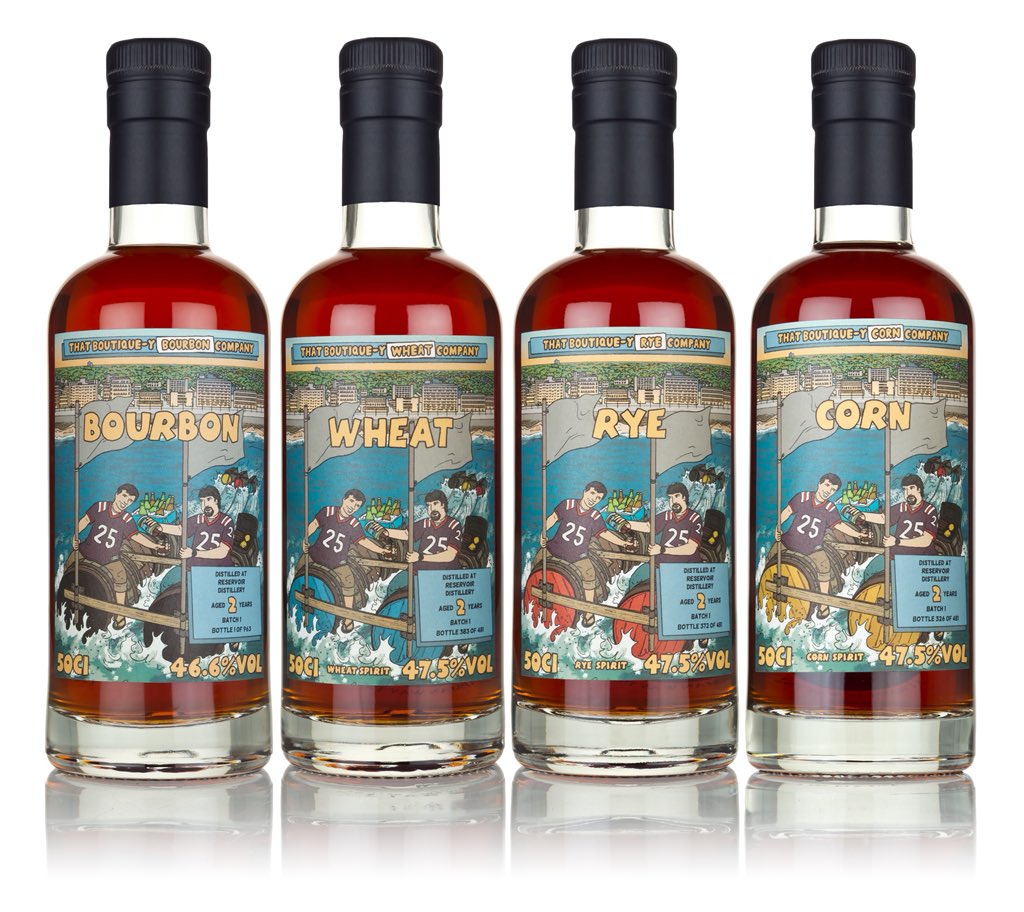 I’ve crunched the numbers guys. There are officially a quadrillion independent whisky bottlers now. Including the cunning, hidden ones, who don’t call themselves “independent bottlers” per se, but source whisky which they’ve not distilled themselves, then slap a shiny new brand label on it with a story about a mythical duck. They’re indies too, you see, just ones who don’t go to the trouble of disclosing where their independent bottlings come from. (It’s Bushmills, Cooley, MGP, Caol Ila or someone you’ve never heard of from Speyside, F.Y.Information.)

So. A quadrillion independent bottlers. That’s this many: 1,000,000,000,000,000. And of those, approximately 999,999,999,999,994 are almost impossible to distinguish from one another. You picks where you wants your 12th-fill milky-grass flavourant from, you pays your money, and you swallows it down manfully. Or womanfully, depending on your chromosomes.

Such is the state of the single malt world in the epoch of demand. Distilleries who can bang three-figure prices on their in-house 18-year-old aren’t going to flutter their best barrels down to some upstart indie who’ll flog ‘em for a few buttons and a grin. And independents aren’t going to watch the competition stick a cricket score on a water-white bottle of Glen Ordinaire without joining in the fun themselves.

All of which means that many of the new era indies offer pretty anaemic fare. Vanilla in every respect. The Pinot Grigio of the whisky world, without the commercial nous.

That Boutique-y Whisky Company is not in that category.

The cutesy, cartoonish labels, the chirpy bonhomie of the rhetoric and the general brand quirkiness chip away at my jaded, curmudgeonly hack soul, bringing me out in fits of indulgent whimsy. I even forgive them the miserly 500ml bottles. (Just). But only because what’s behind the labels is actually, genuinely, worthwhile, interesting stuff.

These are bottlers who not only espouse the “great whisky is made outside Scotland” truism, but back up cheap words with (admittedly not always very cheap) bottlings. Scotland’s the headline, of course, but Ireland, India, the US, Germany, Sweden, Japan, Switzerland, England– even New Zealand– have all been scoured for barrels. By my yardstick, Canada’s the only big name missing from their teamsheet and – for the record – I’d be first in line if they bottled a Hiram Walker rye.

What’s more, most of their bottlings are good. Some of them are brilliant. If you get a chance to try their Paul Johns (and you’ll have to stump up a bit) you should hurl your cash at them like a fiscal discus.

But today’s lineup of Boutique-ys caught my eye more than most. Four whiskeys from Reservoir, a US craft distillery which I happen to think is really rather good. I’ve reviewed three of their whiskeys on Malt to date, the wheat, the rye and the bourbon. And I’ve covered another of them for the British Bourbon Society.

Reservoir’s particular schtick is in bottling their flagships with mashbills comprising 100% of one grain. The Distiller, David Cuttino, uses this to encourage drinkers to blend them together; creating their own personalised whiskies, having learned the characteristics of the individual cereals. Which, as an enthusiast, I happen to think is rather a cool idea. (Albeit I can’t afford a full-sized bottle of each of the flagships.) And that’s exactly what Boutique-y have done.

The flight is made up of a rye, a wheat, a corn and a bourbon whose mashbill is 80% corn and 10% each of the other two. Strictly speaking, the corn could count as a bourbon too, having been aged entirely in charred new oak, and distilled and barrelled at appropriate strengths. I’ve moaned on Malt before about the misconceptions surrounding corn whiskey vs bourbon. As long as the mashbill is over 51%, and the oak is new and charred, it can be the latter. And 100% is over 51%, as any calculator will assure you. (Though I see why Boutique-y labelled the 100% corn whiskey as they did. Things could have got rather confusing otherwise.)

They’re all two years old, similar to Reservoir’s flagship range, and hats off to Boutique-y for stating the age. Nor does that humble total mean that the whiskeys can’t be decent. The St George’s Rye from Boutique-y was that age, and utterly flattens almost anything in its price bracket. It just means that they’re not labelled as “whisky”, but as wheat/corn/rye spirit. Delete as appropriate.

Curiously for Boutique-y though, these don’t appear to be cask strength. They’re all 47.5% except for the bourbon, which is 46.6. No idea why this might be the case, and I mention it solely as an unusual aside. The Reservoir standard issues, for what it’s worth, are all 50%.

Righto then. Lots to get through. Let’s dive in. 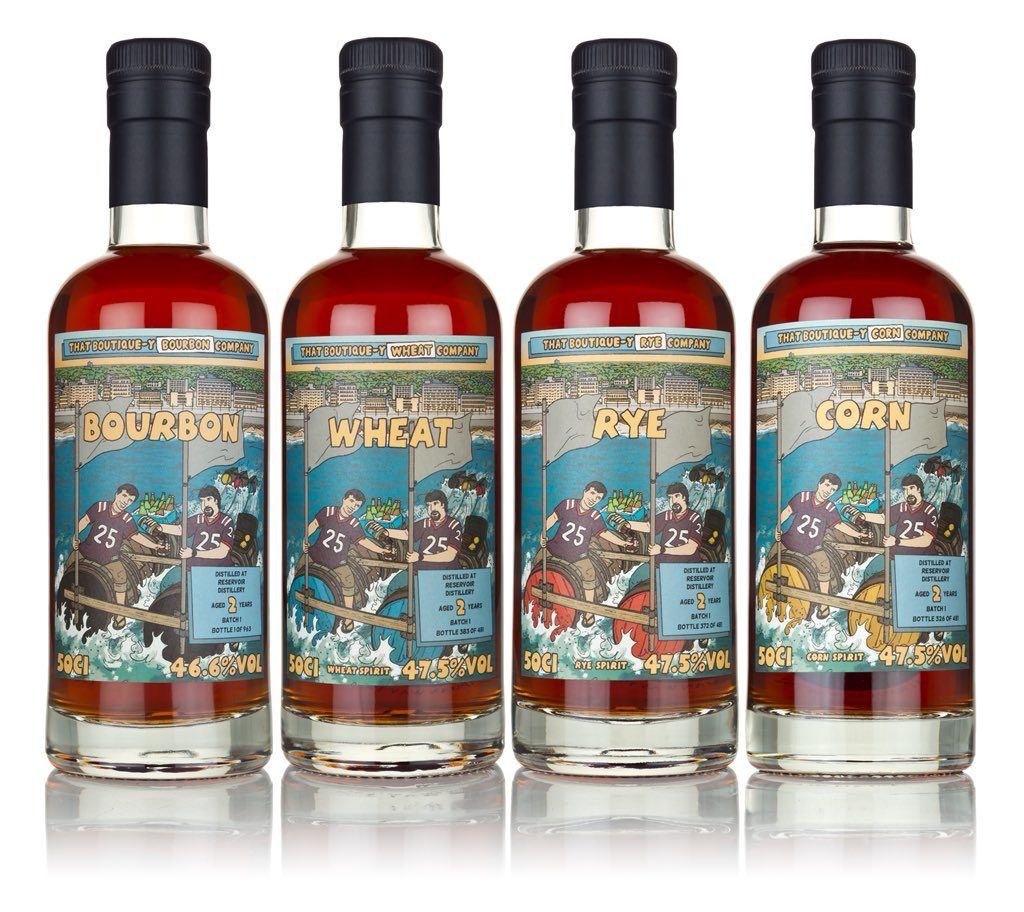 Colour: Dark caramel. (Actually, all four are near-as-damn-it identical in colour. So I’ll not bother with mentioning it after this.)

On the nose: Plenty of lush caramel on arrival. And Werther’s Originals. There’s a distinct lift, but it’s not acetone. Orange zest. Pine. Red cherries and a little sawn wood.

In the mouth:  Pretty big oak on delivery, with lots of caramel and vanilla.(Somewhere in Scotland, Jason grinds his teeth.)Very well-defined texture though; great clarity of flavour and a texture that sits nicely in your mouth. Spices buzz in the background. A little nutmeg and orange fruit pastille. The weensiest suggestion of pear drop acetone. Finishes to wholemeal with a touch of sweet liquorice. Very classic Reservoir.

On the nose: Lush, deep, earthy corn upfront. Weirdly reminds me of some Heaven Hill stuff, despite the mashbill. There’s a faint, and rather pleasant mustiness; half farmyard straw, half antique shop. Buttery, rich in caramel, just a wisp of banana. No – banoffee. (“Om nom nom” says the banoffee-crazed geophysicist.) Very chunky.

In the mouth: Ye gods, that’s glorious to hold in your mouth. Thick, unctuous caramel, dark muscovado and deep nutmeg. More of that earthy corn – buttered – with pecan nuts on the side. Alcohol is wrapped right up; it’s just there as the skewer. This is a two-year-old corn whiskey? Seriously? That’s cracking.

On the nose: Fruitier than the corn – oranges and raspberries – and with more lift of dill and menthol. Still lots of caramel, but the cereals are dialled right down here. Cinnamon and polished oak. A thread of bonfire smokiness. The rye looms large, but I’m not sure what’s added by the wheat.

In the mouth:  More upfront herbs and spices on the palate. The dill and menthol again, plus fresh black pepper. Behind which come the juicy caramels, a little ulmo honey, and sweet buttered popcorn. A whack of char, with nutmeg and clove on the finish. Great definition once again, and the most complex of the quartet. (Possibly unsurprisingly.)

On the nose: Very spicy – loads of attack. Pepper and woody ginseng to the fore, with dried rye grass and star anise in behind. By some way the driest nose of the four, which isn’t to say there isn’t some orange marmalade and dark chocolate lurking like the guilty kids at the back.

In the mouth: Nice palate – spicy again, with dill and cinnamon. Not quite as rounded as the corn or the bourbon, but fizzing with black pepper, sawn wood, malt (and almost hops). A sweet medicinal quality, with a little red fruit. Lots of fresh rye toast on the finish.

This is a really cracking quartet, from a distillery who know exactly how to treat every grain that they work with. I’ve said before that Reservoir is in the very top tier of the US craft movement; I now reckon I’d put them in the top five. The spirit they distil is simply excellent, hence its quality at such a young age.

Have to draw attention to the scoring bands we use on Malt. I’ve given the rye the same as the wheat, but I’d say the rye just about has the edge. Same goes for the corn and the bourbon, but the bourbon would be my pick if I could only have one of them. Which is why you should check out the way we translate our marks. (And remember that anything over 5 equals good, just like in any non-stupid exam you ever took. That’s right America. You heard.)

But here’s the bottom line: Reservoir has produced four cracking whiskies, and Boutique-y have tapped up another great distillery. I’d love to see what would happen if Reservoir aged their stuff longer, and in larger barrels, but it seems churlish to complain about what they’re doing already.

I half wish they’d bottle something rotten, so I can use the smashing Reservoir Dog pun I’ve got lined up. In the meantime I shall keep on exploring, and I recommend that any fan of US whiskey do the same.

(Thanks to Dave at Boutique-y for the samples. Especially since he knows I’d have said sniffy things if they hadn’t been any good.)