We’re already building a nice wee portfolio of releases from the Golan Heights distillery. An unusual place to start a distillery admittedly, we’re interested in the output and what it can bring to the world of whisky. Already I’ve gone into detail on a previous article about its background while Mark has taken in – and been impressed by – a recent single cask release.

One of the delights of being involved here at MALT is trying whiskies that would normally be firmly out of reach. This could be the old classics and unicorn whiskies that I sometimes dabble in. Increasingly, however, it is whiskies from across the globe as distilleries in remote regions start distilling and bottling their own whisky. Such is life here that I cannot think of another website versed in whisky (or whiskey) that attempts to push out from the traditional homelands of Japan, Scotland, Ireland or North America. Believe us, the whiskies outside of these geographical giants are just as complex and intriguing as anywhere else.

Frustratingly many do remain out of reach. I’ve read reviews here and thought about sourcing a bottle for myself and can I find the target anywhere? Even in this modern age of connectivity? No danger. I’m sure its the same for many of you out there or onlookers further afield reading my latest Cadenhead’s or distillery exclusive piece. We all feel and share a similar pain.

Distribution is the key channel and such channel influencers can demand a pretty penny for shipping goods. Fickle at times as well with potentially major brands carrying more influence and financial clout (or is that impact) than a wee distillery that manages to fill a cask per week. You can see where the relationship is going. On the flipside if I was producing such a handcrafted spirit – note it’s not Balvenie – then I’d want to control as much as the whole process possible. Or at least only work with those I trust. In these times of whisky wildfires once word gets out about something good then it’s literally gone.

Let’s talk about the trio of Golan Heights whiskies we have here. The ex-Golani-Black cask is bottled at 62.1% strength, is 36 months old and only 40 bottles were released at this cask strength. Unsurprisingly these promptly sold out leaving 295 bottles at a more modest 46% alcohol strength. If you’re asking yourself what the heck? Then it’s an ex-bourbon cask that originally hosted the Golani Black Whisky for a brief period. The charring giving rise to the black emphasis but the short duration of maturation means it was good enough to hold further spirit for a prolonged period.

Not to confuse matters but cask #13 is also an ex-Golani-Black cask, first fill American oak matured for 39 months before being bottled at a slightly lower strength of 56.7%. Last, but by no means least is cask #16, a 1st fill French oak Cabernet cask. Distilled on 29th March 2015, it was bottled on 11th April 2018 at 36 months. An outturn of 190 Bottles was harnessed from the cask and bottled at 46% strength.

On the nose: a coarse vanilla mingles well with rosewater and dark chocolate. Charred oak unsurprisingly but more dynamic elements with a silky smooth caramel, golden syrup and cloves. Left in the glass for longer a more perfumed menthol characteristic comes through.

In the mouth: impressive for its age and very drinkable at this increased strength. Toasted bread, crushed cloves and fruit malt loaf. An emphasis on dried fruit, a nice buttery dynamic, star anise and liquorice.

On the nose: very engaging, almost a vanilla cream with black pepper composition. A rich caramel underpinned by roasted coffee beans. Left to open up more a black tea influence and walnut whip. Less of a forceful oak influence compared to cask #10 and all the better for it.

In the mouth: a real contrast to the nose. More spirit based I’d say with the cask influence bubbling beneath with oak, cinnamon bark and cardamom. There’s a nice charred toffee taste with cereals as a basis. Not hugely detailed but fun nevertheless.

On the nose: a gentle arrival with strawberries with strawberries, red liquorice, cranberries and rose petals. A touch of glue – in a good way – with cherries and then a dryness from the cask. Patience reveals a rich marzipan and more almonds.

In the mouth: an enjoyable mouthfeel followed by a fruit sweetness burst as you pop red grapes in your mouth, before a dryness from the cask takes hold. But the flavours are prolonged and pleasant. It has a cloying nature, you have to unlock some of the layers that showcase cinnamon bark and clove. More cherries, marzipan and a herbal aspect with basil, red wine vinegar and dried cranberries.

Where to start? Cask #10, a solid opener and good fun that sets the tone well for the rest of the trio. Personally, cask #13 needs more time. Already an interesting whisky, the extra time on the palate would pay dividends. It already has a style and funk of its own, but the potential is untapped still. Very cool after 39 months though. Cask #16 thanks to the vessel, feels the most good to go right now. Very drinkable, characterful and enough complexity even at 46% strength. In summary, these are interesting whiskies from the Golan Heights distillery that continues to impress at a young age. 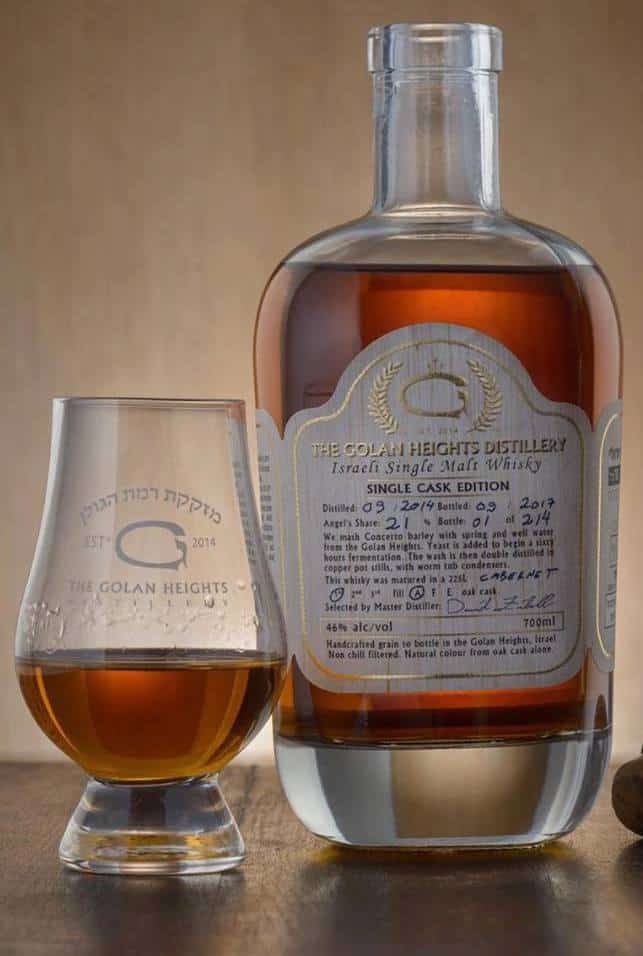