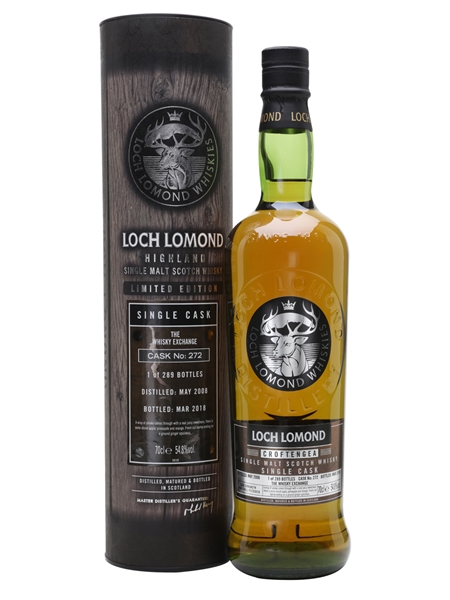 When I last tasted this whisky I was on the crowded deck of a paint-peeled ferry, lazily plugging away from Rowardennan. Sun-baked, ruddy-skinned; an all-you-can-eat for vile midges; watching Angus MacRaild’s reaching arm sink into Lomond’s mirror like a beefier Lady of the Lake. “At least he’s not naked this time”, observed Billy Abbott.

That was the last time. The last act of the last Dramboree. A farewell concert into which I stumbled, uninitiated. A last hurrah that I cheered without knowing quite what I was cheering. A wake for someone I never really knew. This was my bottle; my offering to the famous dram table, but other, ritzier, rarer whiskies had pushed it to the sulking periphery, so I still had most of it left. And, grasping for my share of reflected pathos, I had poured myself a final glass as we slipped across the water. If you can’t drink Loch Lomond on Loch Lomond, where can you drink it?

Croftengea is one of Loch Lomond’s peaty makes. It’s distilled entirely in hybrid stills; pots with straight rectifying columns in place of swan necks. Distillers can draw the make off at varying strengths; in practice Loch Lomond take theirs at 65 and 85% abv. Inchmoan, which Jason and I have both covered before, is an intertwangling of both. But for Croftengea they use only the richer, heavier, more phenolically dense 65.

We’ve talked on Malt before about Loch Lomond quietly being Scotland’s most improved distillery. Indeed I believe Jason and I are in complete agreement here, which must make it the exception that proves the rule. Inchmoan has now joined Inchmurrin and Loch Lomond in the distillery’s core lineup, and there has been a sudden flurry of single cask Croftengea. So much so that I wondered whether they were the outriders of another addition to the official range’s ranks.

This one was The Whisky Exchange pick. I bought it because I’ve loved all the recent Loch Lomond bottlings, and because it seemed appropriate for Dramboree. It matured in a single refill American oak hogshead for a fraction short of ten years, at which point it was bottled at 54.8%. It’s all sold out on the Whisky Exchange now, but you can still buy samples from them, and I imagine it’ll resurface at auction.

That’s it. No ranting, no barbs, no axes to the grindstone. No call for five-quid words or chortle-chortle witticisms. My memories of this whisky are whispering; introspective; melancholic, and they flicker about me now as I hunch over a fresh glass, far from the low braes and the clustering islands.

On the nose: Spellbinding tandem of fruit and peat – so rare in young modern bottlings. Shades of pre-millennium-distilled Ardmore. Apples and pears plus riper, juicier tropical notes of pineapple juice and mango. All sashaying along a catwalk of pine needles, earthy spice and hearth. Intense aromas, but no nasal burn.

In the mouth: The delivery is as ripe, plump and heady with juicy orchard fruit as the nose would have you hope. In fact somehow it is even more so. Pink grapefruit joins the ensemble, plus lemon drizzle, lanolin, orange blossom and bonfire ash. But the fruits are the star. No burn – for the best part of 55% abv, this is ridiculously comfortable to drink neat. The geophysicist summed the whole thing up far more comprehensively and poetically: “like a walk between an orchard in summertime and the sea.”

Loch Lomond are flying at the moment, and this is a fabulous pick by the Whisky Exchange. It is possibly the best new whisky for under £100 that I’ve tasted this year.

There are flavours in this bottle that are not only alien to the average malt under 15 years old or so, but have all but vanished from modern whisky altogether, as the ceaseless efficiency juggernaut drives out the old triumvirate of tropical fruit, minerality and waxiness.

I’ve said before that my yardstick for serious quality is eight out of ten. But if the eight club is sanctified, nine-plus is Tabernacular. This whisky isn’t quite there, but it’s hammering on the door. It can see the next level like Lancelot’s glimpse of the Grail; veiled; enveloped in dazzling light, but there – within the outstretching of a hand. This Croftengea is the best thing I’ve given an eight to since the Paul John Peated Select Cask.

It is an important whisky. A fading photo from a dusty album; a nostalgic glimmer of what used to be. A revolution is taking place in Alexandria; right now some of their single malts are creeping towards Springbank quality. This is just a single barrel, but if the style can be repeated – and vatted – then the gradient of history’s slide may yet be checked. If not, or until such time, I will eke out this unexpected murmuring from the past for as long as I can. Until the reaching hand has wholly sunk, and the last ripples have melted behind it.

It was even more fitting for Dramboree’s swan song than I’d thought.