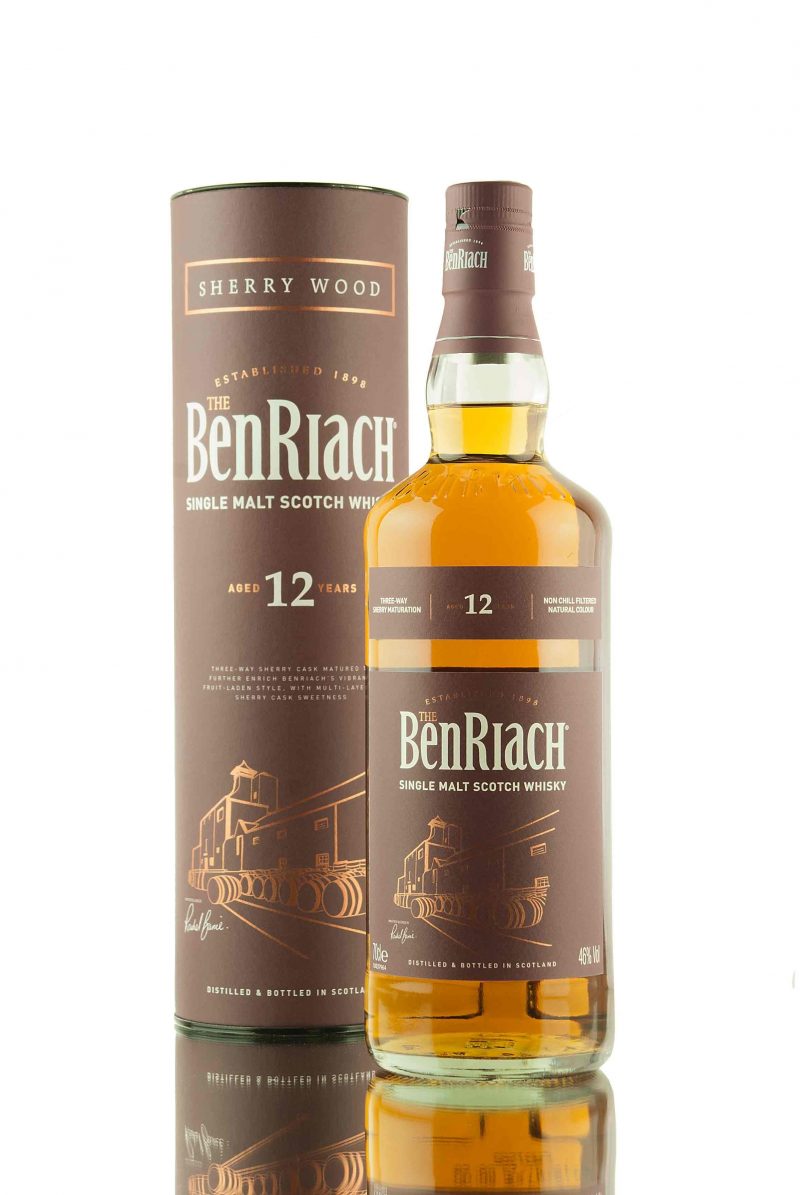 And that’s kind of my point – if indeed I have a point – to this review. Which is to say: isn’t whisky getting boring? Considering how many distilleries are operational, and how many things one can do in the industry if they were inclined to do so, aren’t things just a bit dull?

Don’t get me wrong – if you wanted to skip to the bottom and save yourself a couple of minutes, this is a good – and good value – whisky, and you should most certainly buy it. Well done, BenRiach.

But this is… a 12 year old whisky. Fine. It’s ‘sherry wood’ which is bog standard for the industry, but not really a headliner. Fine. And all I have to say is… this whisky’s spent 12 years in sherry wood. That’s literally it. That’s the name, that’s the selling point. This whisky’s USP. And to my knowledge, it’s another revival of something previously quite popular.

I don’t mean to pick on BenRiach here. At least we have some indication of what’s gone on with the age and the maturation.

So, let’s zone in on the details themselves.

This whisky has been matured in sherry casks, and then… wait for it… finished in a combo of Pedro Ximénez and Oloroso sherry casks. So matured in sherry, then finished in more sherry? Reracked from one sherry cask into another. That prompts the following question: what was wrong with those initial casks? I’m guessing they were probably old hat, been around the block etc. i.e. cheap. Someone tell me if they weren’t well-used – because if the casks were good, why finish them in the same wood?

Or perhaps I’m being harsh: perhaps this is so that they can call it ‘sherry wood’, by faffing around with more sherry casks. Sherry Plus. Sherry Max. SHERRY.

BenRiach global brand ambassador, Stewart Buchanan, said this whisky is “more Sherried than the previous edition, and has a richer note to it. It’s not overloaded with Sherry though…”

But do you see my real point here? There’s nothing really interesting about sherry wood. This quote tells us nothing at all. This is just an age-old maturation vessel that we’re trying to communicate as a headline. It’s like saying ‘this is WHISKY whisky’. And this sort of thing isn’t a BenRiach problem, it’s an industry problem. We see bourbon wood mentioned everywhere as if that’s special. Maybe there will be a short-term spike of interest, but in the long run? It means no one will care. The fetishisation of very ordinary things will leave Scotch distilleries with nothing to say. We’re seeing so many terms being over-used these days, like premium – which is meaningless; and “hand-picked” which is stupid.

And my personal pet peeve with all with all this wood talk is this: we don’t see is any discussion on that initial spirit. Doesn’t anyone care about that distillate? (I bet the production guys do.) That’s the stuff that matters the most. That’s the stuff that interacts with the wood. That’s where the flavour starts. What about the factors that contribute to how the spirit tastes?

Because the annoying thing is, BenRiach is a really good distillery. The whiskies have been super tasty over recent years – as is this. And it’s good value, at £45.

In the mouth: not many oils in the spirit, it doesn’t cling to your mouth, but the flavours expressed are excellent. It indeed echoes the nose – the orange marmalade and apricot note continues. Green tea and honey, with just a little sourness muting the overall pleasantness. Ginger, grapefruit, a hint of pineapple underneath those layers of sultanas, toffee and vanilla. I wouldn’t say it’s massively complex, but what’s here is very good indeed. A smouldering, ginger-y finish.

All in all, very good value for money, some lovely flavours. I only wish this had a little more oomph on the texture front. As for the value of an age statement whisky, this is like buying whisky in the old days – £45 is a splendid price. As I say – you should buy it.