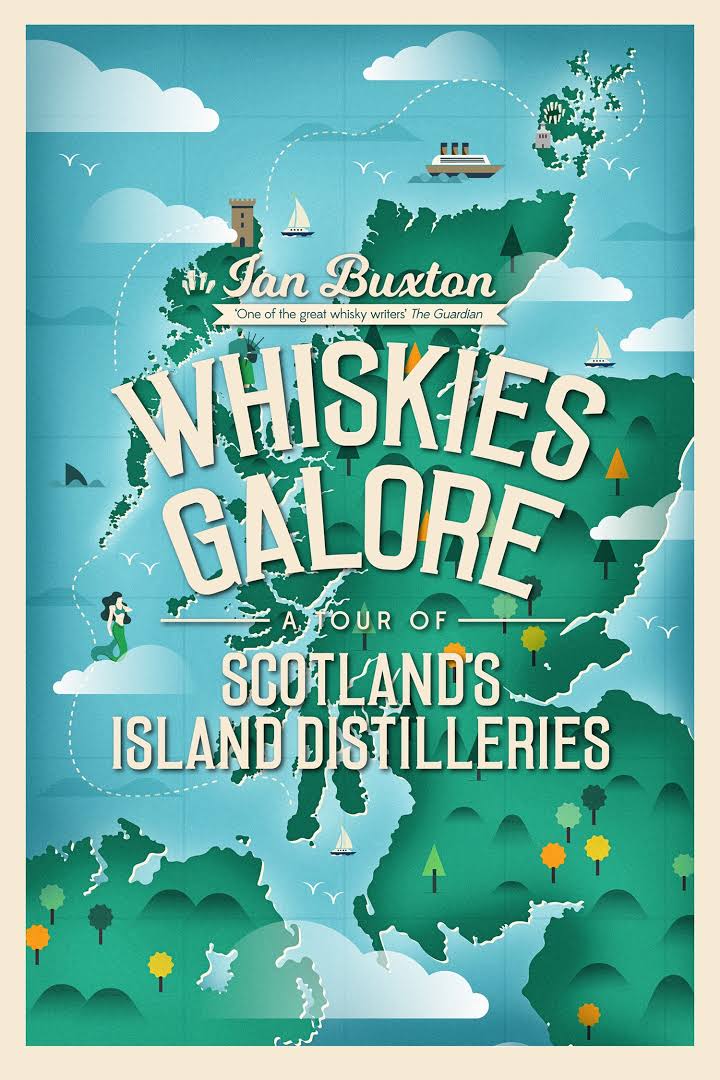 Before I so much as turned a page of Ian Buxton’s Whiskies Galore! I found myself gulping down deep breaths of sweet fresh air, because – praise be to Aeneas Macdonald– this book isn’t Another Introduction To Whisky.

Surely, by now, we’re at the deep end of the Introduction-To-Whisky tar-pit? The gloopy casserole of same-again truisms, distilling-the-basics, hundred-to-try, quasi-cliché-busting, ten-things-you-didn’t-know same-old-same-oldery, all in easy-peasy language for the imagined throbbing market of addle-brained tenderfeet. How many more quirky jargon-busters, re-ratioed cocktail suggestions, tasting guides and irreverently-posed photos of tight-trousered moustache faces can the shelves of Waterstone’s realistically hold? How many of these mushed-banana pamphlets have really added more to whisky’s canon than a dumbed-down, rehashed, zero-calorie, plodding-prosed pastiche of Michael Jackson’s peerless Malt Whisky Companion? Other than a whisky flavour tube map that precisely nobody had been crying out for?

The second thing to love about Whiskies Galore! is that it isn’t Another List of Arbitrarily Selected Whiskies. Albeit it’s written by the man who practically invented that category. At the rate that these whisky lists are published, Mr Buxton’s next book will be entitled 101 Whisky List Books To Roll Your Eyes At Despairingly Before You Die. The introduction-to and the bottle list are whisky writing’s two knackered old cornerstones; chipped and chiselled to within a crumbling inch of their lives. They’re the in-print answer to short fermentations, fifth-fill-casks and travel retail NAS. Surely, at a time when whisky has never been more interesting, more speculated-over, more ripe for criticism and more global in scope, there’s room for its ink-widdlers to wax a little less repetitively anodyne?

Anyhow. Enough of what Whiskies Galore! isn’t, and on to what it is. Which is Buxton’s journey up the west coast of Scotland (and around to the north east) by way of its distillery-studded islands. His route is occasionally random (Jura and Mull before Islay, Harris and Lewis before Skye) but this is doubtless to ensure that the three principle whisky islands, Islay, Skye and the Orkneys, are reasonably spread out. He is accompanied on his Odyssey by his wife (I imagine she does the lion’s share of the driving) and along the way he examines not only the whiskies and distilleries of Scotland’s offshore rocks, but something of their culture, history and modern importance. All viewed through the prism of his career in the whisky industry, as well as through his halcyon childhood holidays, when the islands had not yet been hammered on the anvil of tourism and when you could still (apparently) grenade mackerel with relative impunity. 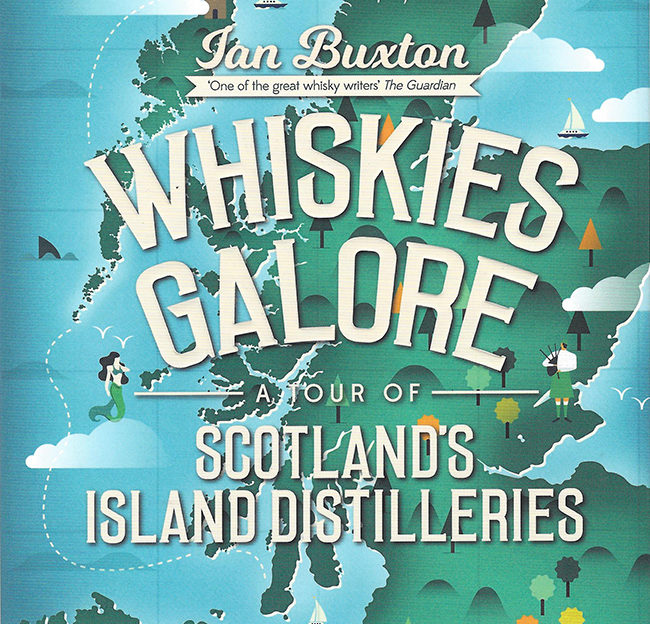 So that’s what Whiskies Galore! is about. But what it really is, is opinion. Glorious, undiluted, honest, critical, unapologetic opinion. As he sails and steers across his sea-locked subjects, Buxton has an opinion on everything and (largely) everyone. CalMac ferries, Scottish coffee, tourism, Arran’s new build, Arran’s old build, Russian admirals, old whisky postcards, other whisky writers, golf, restaurant prices, bloggers, Kirkwall’s retail scene, gin, fountain pens and arts’n’crafts.

And distilleries. Boy, does he let us know what he thinks of distilleries. He would, of course; it’s a whisky book after all, but where other whisky writers tramp with diligent earnestness through a numerical quagmire of still capacities, founding dates, output gallons and water temperatures, Buxton (largely) just tells us what he thinks. Of the buildings, the personnel, the liquid, the locals, the marketing, the visitor centres and (again) the coffee. (Coffee, it seems, is of signal importance to Mr Buxton. On the whole, he concludes, quality appears to be on the up).

As to his opinions on distilleries, Buxton’s honesty is so fresh and forthright that it is almost, at times, disarming. Arran was a barmy idea. He considered suing Sir Iain Noble. Several Islay distilleries are more than a smidge up themselves. Harris is too slick and touristy. His preferences and biases are laid similarly bare. Buxton doesn’t like the really peaty stuff. He wonders whether Arran would be missed, had it not existed. He is charmed by the raw, neo-primitive clutter of Abhainn Dearg and is obsessed to the point of discipleship with Highland Park. (Though he sensibly thinks they should ditch their murmuration of indecipherable Vikings.)

All of which is communicated in light, sparkling, eloquent prose that is, quite simply, a pleasure to read. It sounds – and so many drinks writers slip up here – as though you are being talked to by a real person. Buxton’s writing takes you into his lounge (cafetière, no doubt, on the trestle table) and tells you stories that are witty, convivial, interesting, insightful and burnished with lightly-worn authority.

It isn’t perfect. In treating each distillery differently, Buxton occasionally neglects detail. At Talisker, for example, we are regaled with a near-exhaustive account of its past, but scanty detail on its present. (Though perhaps that is a commentary on modern Talisker in and of itself…) This also tends to be where the lightness, deftness and confidence of the prose trips up slightly; when Buxton does talk of history and operation, it is generally with the worthy weight of Ian the Academic; more the serious, fusty study than the conversationalist’s drawing room.

What else? At times Buxton’s open admissions of exotic freebies become repetitive and slightly grating – “I’ve tried 1991 Lagavulin”, “I was poured 35-year-old Talisker”, “I got a Champagne yacht trip to Islay – but don’t be too jealous as it was only Moët & Chandon”. Indeed Buxton seems, occasionally, to draw a slightly mischievous glee from flopping his freebies so wantonly on the literary table. One wonders whether the real aim of such scattergun honesty is to wind people up a bit.

His biggest miscue, in this reader’s opinion, comes on pages 64-65 when, whilst musing on the alleged “wild nature” of history’s native Ileachs, he writes “the reputation of the female portion of the island for casual sexual encounters is apparently well founded. Or so I’m told.” Quite why Mr Buxton thought this addendum was necessary is beyond me. I’ve no doubt he was shooting for a risqué chortle, but for my money he missed dramatically, and its sudden, striking misogyny casts an ugly pall.

That aside, Buxton’s meandering romp up the west coast of Scotland is, by some distance, his most enjoyable work yet. There is more for the serious enthusiast to chew on than there is in his 101 series, and enough of his signature humour, eloquence and style for a whisky novice who simply wants to read a good book. It is a rare and wonderful example of whisky writing in which the writing has been as considered as the whisky. It feels like a book that Buxton has had fun with. You will read it with pangs for swept machair, secret cove and the shrinking wilderness of Scotland’s islands. Pour yourself something suitable and let him take you there.

You can purchase Whiskies Galore! via Amazon for £11.64. (The commission link helps keep the Malt lights on.)