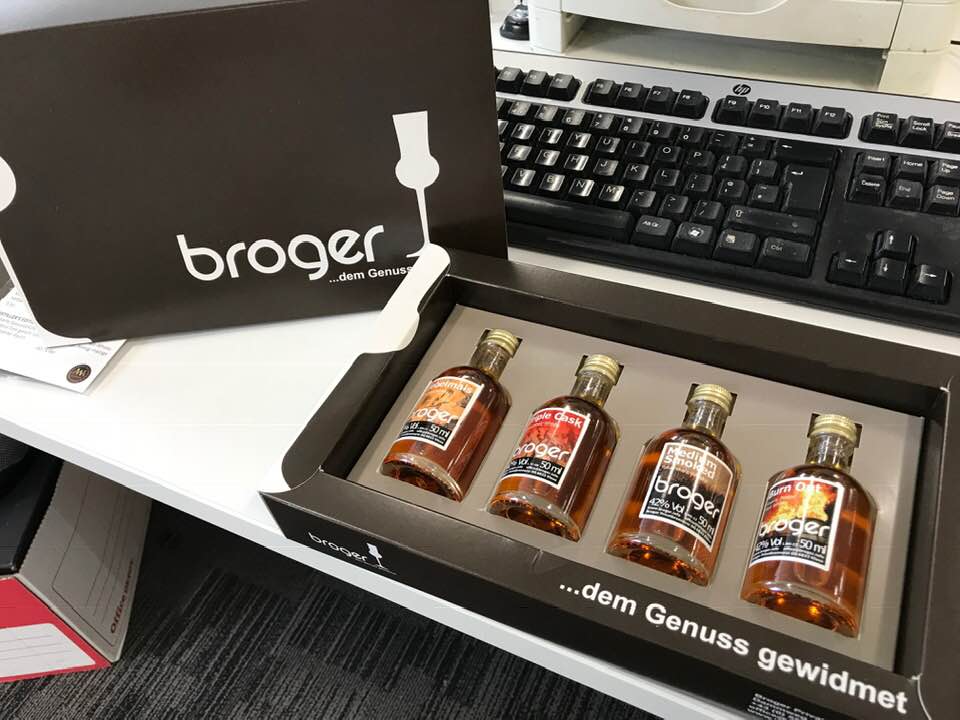 Right then class. Wake up; pay attention. We’ve a lot to get through, so I want no messing around at the back, and no staring out of the window either – break time is later.

Today we’re on another Malt “field trip” to the continent, but we’re not schlepping off to Scandinavia or Switzerland this time, nor even slipping across the Belgian border into Holland for another dalliance with Millstone. Instead, we’re hauling right over to the Eastern Alps and setting wheels down in Austria at the Broger Privatbrennerei.

I’ve not tried any Austrian whisky before, for the simple reason that there doesn’t seem to be any on UK shelves (except for something expensive in Hedonism, no doubt). But someone must be knocking back a fair bit, because Austria boasts a thumping fifty brennereien (distilleries, for those who hadn’t made the leap) and at least one of them has been brennerei-ing since the early nineties. Indeed there’s even an Austrian Whisky Association, which pre-dates its Irish counterpart by a couple of years.

Which begs the question: why is there no Austrian whisky to try in the UK? Presumably several of these distilleries operate on a Tasmanian-esque Lilliputian scale, but you’d have thought some adventurous soul from the likes of Atom brands might have liberated a bottle or two. Indeed Austro-German whisky in general is conspicuous by its absence in the UK; it’s only really Stork Club and a couple of independent Slyrs bottlings that I’ve come across; and that seems rather a shame. I can’t imagine they’ll be queuing up to export it come 2019…

Anyway. Back to Broger. They’re based in Vorarlberg, which, I am reliably informed by Google maps, is the westernmost tip of Austria’s trunk; the bit that looks as though it’s sneezing out Liechtenstein. They make a variety of different whiskies from a variety of different grains which they mature in a variety of different barrels. As to such things as caramel colouring and chill-filtration, I don’t have a clue. Though I don’t imagine they use the former, and I’d be surprised if they employed the latter. We’ve four whiskies to make our way through, of which the first, Riebelmais, is a corn whisky, and the subsequent three are all malted barley. They’re bottled at 42% ABV apiece, and they’ll set you back €56 each, which is approximately £699.99 at current exchange rates. 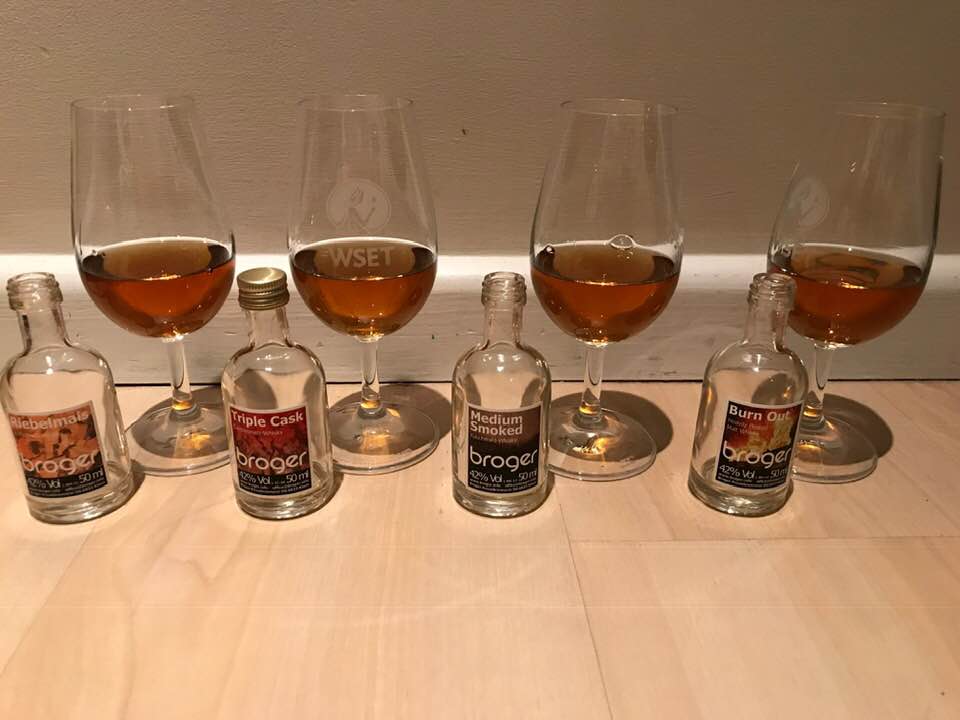 (100% white corn, aged in new oak and finished in ex-sherry)

On the nose: Interesting. Bit like a lighter version of Boutique-y St George’s two-year-old rye. But sweeter, because of the corn. Caramel and light germoline. Raisin, brown sugar, toffee sauce and postmix cola. Nutmeg and smoky mixed herbs. The oak is fairly forceful. A slightly odd touch of brown paper bag.

In the mouth: More overtly corny here. (No, not in that sense). Muscovado, corn oil, popcorn, vanilla, caramel. A bit of BBQ-glazed ribs. Don’t think m’colleague Jason would much like it, but bourbon fans ought to get a kick. A little more of that pseudo-medicine cupboard thing before a finish which is ever so slightly bitter and short. There may not be much booze, but this thing is kicking with flavour.

On the nose: Lighter nose than the Riebelmais. And more florid. Rose petals and honey. Light vanillas plus tinned pears and peaches. The merest whiff of sultana and white pepper. A smidge ordinary, perhaps?

In the mouth: Cripes. Where’s that come from? Much richer and juicier on the palate. The fruits dry and deepen, and the body and heft increases dramatically. Prunes, and something almost meaty. Sticky toffee pudding. This is very good – and far more unctuous than you’d expect for the proof. Only the ever-so-slightly brief finish gives it away.

On the nose: Ack! That is smoke. And not sonorous, round, comforting smoke, but acrid, harsh, “oh my God, get out of the car, get out of the car, run away, run away as fast as you … BOOM! … oh s*** we left the cat in there” smoke. Rubber and clutch. This is the smell of a city in the Old Testament that has angered God. It’s also eye-wateringly woody; a shrieking duet of big oak and beechwood smoke. There’s some caramel and dried fruit behind all that, but it’s barely noticeable.

In the mouth: … see “on the nose”. Though I must say it’s another lovely texture. There’s also more of the caramel, oak, vanilla and brown sugar. But then that dries up and you’re left with the vicious, mouth-puckering smoke. This is seriously polarising fare. It goes in the same category as such things as Balcones Brimstone and Santis Dreifaltigkeit. (Albeit I’m a fan of both of those.) There simply isn’t a middle ground with whiskies like this. You’re either going to love it or loathe it, and I’m afraid in this instance it’s really not for me.

On the nose: These Austrians like their aromas BIG, and this is the biggest yet. An almost-Octomore level of farmyard funk and peaty tar. But behind the smoke it’s simply rippling with caramels, sandalwoods, BBQ sauce and husk. I mucked around with a blend of Weller 107 and Ardbeg 10 last year, and this nose reminds me of that.

In the mouth: Again it’s a deliciously oily, opulent palate, with more of that chewy, farmyard peat, in thunderous tandem with husk, malt and caramel. Rounded, ripe and rumbling. Hearth wood and coalsmoke. The chimneys of wintertime.

And… breathe. These whiskies are immense. How Broger pack so much flavour into 42% abv is beyond me. They’re obviously distilling a heck of a chunky spirit, and putting it into properly active oak.

These are absolutely no-compromise whiskies, and I’ve a great deal of admiration for that. There’s no hiding here; no apologetic fifth-fill wood. They allow themselves, as it were, to be wholly known, and for that I think I will love them more than all my sensible samples*. That birchwood-smoked thing certainly wasn’t for me, but it’s so outrageous that, despite the mark, I’d still almost recommend trying it if you see it at a bar. (Almost). They’re statement whiskies; pounding, bellowing, fabulous and fun. And they’re absolutely super for this time of year.

Broger also do a ten year old and a cask strength distiller’s edition. I shall be looking out for them intently, but given their size at 42% I reckon I’d need to don protective headgear before tackling the cask strength.

And all of this simply underscores what we have said time and time again. There are some fascinating whiskies being made on the continent, and if you don’t give them a go, you’re missing out in a big way.

The geophysicist is threatening a skiing trip to Austria in January. I might just fake a broken leg first time on the piste, and then trot off to a brennerei or two on the sly. Maybe I’ll see you there?

Samples provided by Broger. But you know by now that freebies never equal kindness from Malt.)

*The eagle-eyed amongst our frequent readers may have spotted my predilection for squirreling poncy Shakespeare quotes into my articles. But Malt’s team is now such a transatlantic church that today I’ve shoehorned a Miller-ian flavour into my pretentiousness instead, in deference. Taylor and Alexandra will, I’ve no doubt, be deeply grateful. Right. As you were. 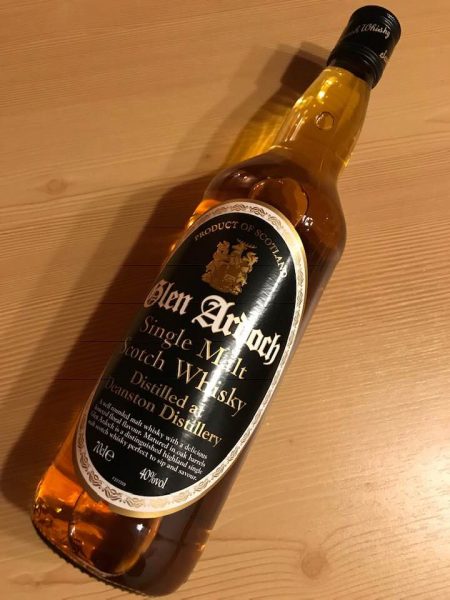