The whisky boom continues and the number of independent bottlers grows accordingly. Many contenders are serious outfits on their own or spinoffs from existing firms, others are more organic enterprises and then there’s the crowdfunding approach we covered in the Whisky Crowd piece.

Sadly, this novel approach failed to hit the target despite the cask selection warranting further exploration. Success isn’t guaranteed, nor the automatic support of the whisky community, #whiskyfabric or whatever it is being called this month. In retrospect, it is also a market where currently there is too much choice in the marketplace. Casks dropping from the skies like rainfall with varying degrees of quality and pricing.

As whisky enthusiasts, we’re automatically drawn towards such releases with iconic names, fanciful packaging or attractive prices. The distant and intoxicating music of the Sirens unknowingly pulling us in and leading us onto damnation, or the checkout as its known in the modern era. Not every release or bottler is a success. Not every whisky is a worthwhile venture. We live in an era of bountiful releases and quality, but a consistency that can become dangerously dull.

Whisky boredom. A new blindness seeping in all around us. The ability to step away is lost and the courage to actually debate is this worth it? What I am actually benefiting from in this transaction? The age statement prompts a certain glaikit look from bystanders. An immediate winner if the bottler can unleash this alongside a famous name. This isn’t always the case as we have here today with a 41 year old creation from North Star Spirits.

This Glasgow independent bottler has certainly made a name for itself over the past couple of years by offering value and quality. I’m asked consistently asked when will Malt cover more from its regular outturns? More so than any other bottler currently, in fact, thereby underlying the interest around its releases. We’ll try our best and like yourselves, we are also living through this bumper age of releases. We can only spend so much of our free cash and lest we not forget to drink in moderation.

Personally, looking ahead, if I can focus on a handful of bottlers in 2019 it will be Cadenhead’s, Gordon & MacPhail, the Scotch Malt Whisky Society and we’ll squeeze in North Star. That’s a promise and I look forward to the stampede to try and pick up some of these North Star releases which don’t last long in due course.

This is the 3rd instalment in the Vega range released in May 2018. Priced at £150 for a 41 year old, the Sirens didn’t need to strike up a melody for this. Distilled in November 1976 before being bottled at 46.1% strength and non chill-filtered. This is a blended malt with an outturn of 400 bottles. The contents being matured in both Spanish and American oak.

My thanks to Noortje who continues to be a delight and provided the photographs in this piece along with a sample. Being kind, it’s only fair that she joins me for a double review.

On the nose: Very musty with the emphasis on oak. Wood spices, a faded cinnamon, wood shavings with waxed leather, orange chews and caramel. It feels tight and water doesn’t reveal much other than dried fruits and rubbed brass.

In the mouth: More wood, or American oak to be precise. A slightly drying emphasis and a fine dark chocolate. Golden syrup with a decadent honey, mace, cardamon, cinnamon and tobacco. Adding a touch of water reveals toffee, vanilla and salted peanuts.

This is a very well priced whisky, but I cannot bring myself to award an 8 here, which is a score I rarely give. My impression is that this Vega has stepped off the summit and is sadly on a downward slope. The wood has taken too much control and whilst what remains is rather good, I do wonder what might have been? I’ll resist the Siren call for while longer.

On the nose: It starts with a combination of dark fruit and red fruit; blueberries, blackberries and strawberries. There is a hint of menthol. Chocolates (chokotoff), caramel, and leather. But then it leans towards some fruity freshness that reminds me of fresh oranges. Also some dried fruits here, like figs. And some nutmeg and cloves.

In the mouth: Sweet, dark fruits again, prunes, and there is again a menthol aspect too. This is followed by resin. It’s spicy, leathery and has some oak notes too. A layer of honey. And then it goes back to cacao and dark chocolates. The finish is long! With spices, vanilla. Some salted caramel, liquorice and dark chocolate. Mouthwatering!

I don’t exactly know what this blend is made of except that it contains liquid from Speyside and Islay. But it is good, very good and I can see myself enjoying this during some of the rainy days in autumn or winter time. In addition, it was also for sale for a very reasonable price and that makes it all a bit more interesting. Kudos for North Star Spirits! 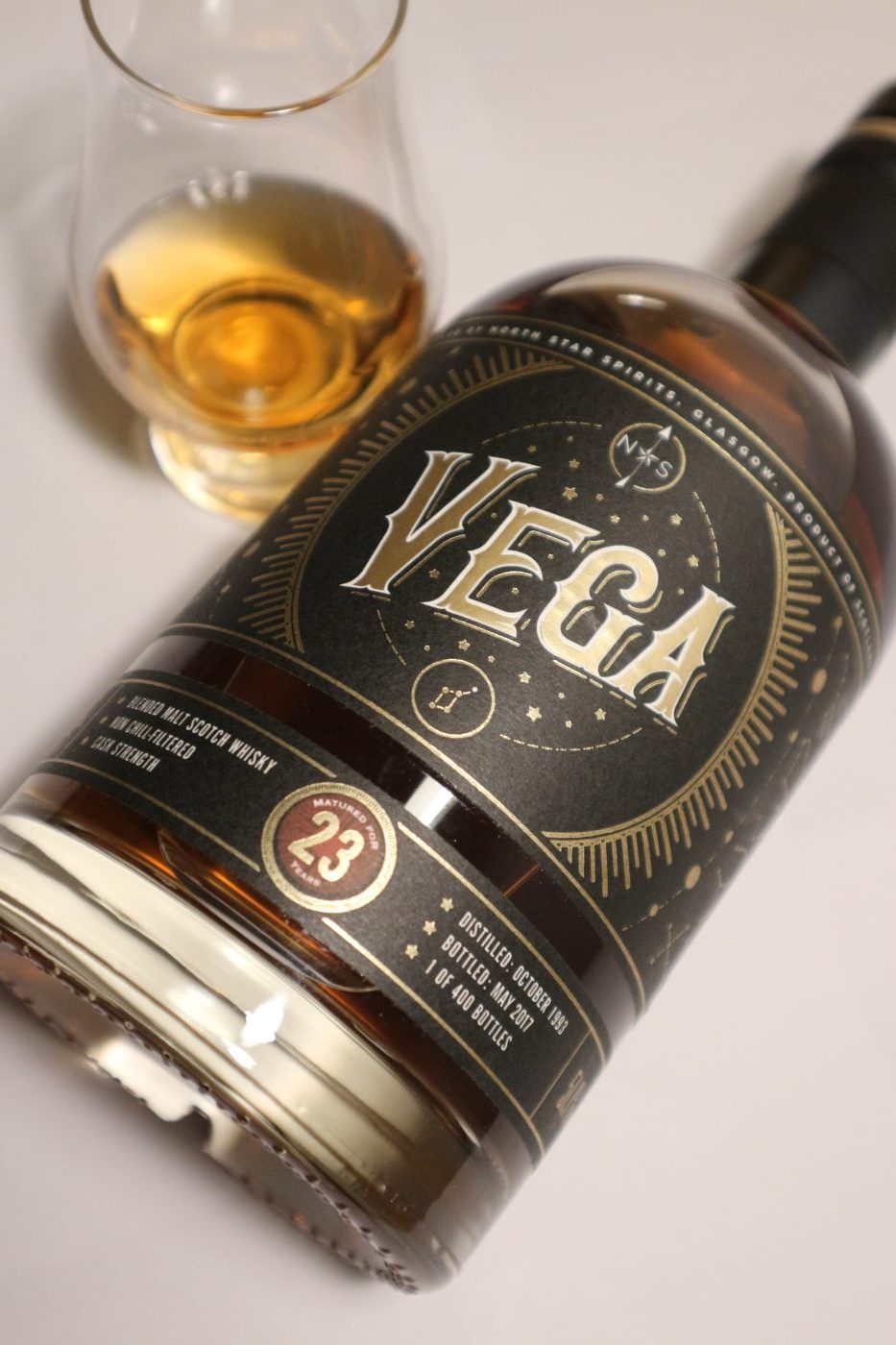