I recently reviewed two casualties of the great Japanese Whisky Boom/Bubble from the Suntory stable. As noted in that piece, though, it was Suntory’s cousin Nikka that formally kicked off the current era of rationing and hoarding. The 2015 decision to discontinue age statement bottlings of Yoichi and Miyagikyo caught the world’s attention and was the harbinger of the subsequent three years of calamity. Today I am reviewing a blended malt from Nikka. As of my last trip to Tokyo this was one of the few remaining widely-available age statement bottlings of any authentically Japanese whisky, and my on-the-ground sources indicate that it can still be found with some regularity.

Nikka has a somewhat similar distillery footprint to Suntory, with two marquee single malt distilleries. However, while Suntory has a workhorse grain distillery in Chita, reviewed here by Jason, Nikka does not. Miyagikyo has produced grain distillate in Coffey stills since 1999, following the closure of the Nishinomiya plant. This is the source of the Nikka Coffey Grain whisky, which Mark reviewed here, and also of the grain component of Nikka’s blends.

Current Nikka chief blender Tadashi Sakuma oversees a team of eight people producing, by my last count, at least 10 different blended whiskies. The Nikka blends have had some coverage from MALT in the distant past. Jason previously reviewed the Pure Malt Black and Blended Whisky as well as Whisky From The Barrel, which has only recently arrived on U.S. shores. Taketsuru Pure Malt, in its now scarce and dear 21 year old expression, was also reviewed by Mark.

An important historical note: single malt whiskies may get all the love now, but they are a relatively recent phenomenon in Japan. As Stefan Van Eycken details in his superlative Whisky Rising, both Suntory and Nikka released their first single malts in 1984 – 60 and 50 years, respectively, since distilling commenced for each. Until that point, the core of each company’s identity (and the entirety of the Japanese whisky market) had been blends.

Speaking personally, some of my favorite whiskies in the world are Japanese blends. Each of the age statement Suntory Hibiki expressions (12, 17, and 21 years old) embodied a distinct personality, while the Hibiki 30 years old is the greatest whisky I have ever tasted. I didn’t so much drink it as I became it momentarily; for an instant it wasn’t clear where I ended and the whisky began. The Nikka Taketsuru 12, 17, and 21 each have their charms, with the latter ascending to heights of greatness, albeit with an unfortunate degree of batch-to-batch variation. Overall, the transcendental quality of Japanese blends – in my experience – has historically destroyed the foreign competition. Nothing from anywhere else has ever come close for me.

Japanese whiskies, more generally, have also beat the daylights out of their overseas equivalents in the packaging department. As I’ve noted before, the bottle and label don’t change anything about the contents. That said, I believe that aesthetics do matter, and that it’s better to produce something beautiful than something ugly. While top marks are reserved for the glorious black-and-gold kanji of the Yamazaki 18 Years Old label and the elegant multi-faceted Hibiki decanter, this magisterial-looking bottle has some serious shelf appeal.

All of the above is interesting chiaroscuro, perhaps, but stories and packaging are mere trifles. Each whisky tried here at MALT lives and dies by the actual liquid in the bottle. Without further ado, let’s see how this blended whisky, aged for a minimum of 12 years, bottled at 43%, for sale at around ¥6,000, stacks up.

On the nose: Immediately expressive in a richly sweet way, with ripe red apples, golden raisins, sticky toffee pudding, and orange peel. Some very pure notes of fruity hard candy. There are sharper accents of curry spice, and mocha. Periodically, the grin component of the blend sings out with a milky sweetness. I detect a Mizunara cask in this blend somewhere, as there’s a spicy woodiness that pervades all the aromas mentioned above, with a fresh jasmine accent at the very back of the nostrils.

In the mouth: Very subtle and rounded, with none of the pointed woodiness of the nose. There’s an entry of dried fruit, and the dry nuttiness of salted almonds at midpalate. More Mizunara on the finish, with that delectably exotic flavor of five spice. This finish is abrupt, and this doesn’t really linger.

A fine blend. I liked prior bottles of this well enough, but this takes up the Mizunara factor and sets itself apart in doing so. Better than Taketsuru Pure Malt NAS, 12 Years Old, and 17 Years Old. About the equal of the discontinued Hibiki 12 Years Old depending on your tolerance for sherry casks, which I found that blend sometimes emphasized, and which have been overused to poor effect in some batches of the NAS Hibiki Harmony. As the last surviving age-statement whisky with any broad availability in Japan, this is a no-brainer if you’re passing by a Bic Camera or Don Quijote. I hope Nikka will seriously consider adding this to its stable of whiskies for export. 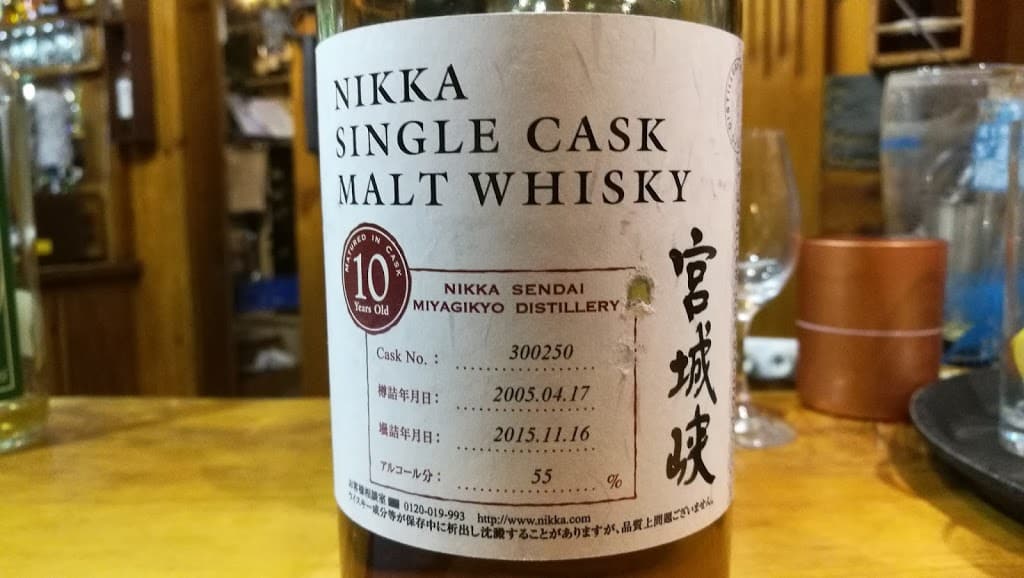