Most recently, Jason reviewed another 1989 Bunnahabhain from the folks at Dornoch, in which he spends most of the review talking about Bruichladdich. This, in my experience, is how many conversations about Bunnahabhain go: a few words and then a segue into a discussion of another Islay distillery.

Is this perhaps to do with the relatively low-key profile of the distillery in comparison with its neighbors? They go about their business, producing a workaday 12 year old single malt, an 18 year old, a handful of NAS expressions, and a range of fashionable cask finishes. Not much in the way of showy limited-edition releases in the style of the annual carnival from Ardbeg, or the occasional dalliance from Lagavulin.

Perhaps it’s all the Gaelic. I’m in the habit of pronouncing the name as “boon-AH-have-IN,” though I’m certain this is mildly incorrect. You think I’m going to mess with Toiteach, or God forbid Stiùireadair? As they say in Scotland, “nae chance, pal.” For all the hand-wringing done in the industry about accessibility, it hasn’t occurred to Bunnahabhain (or their owners, Distell) that being able to ask for a whiskey is the key to accessing it.

So, if we’re playing Islay mad libs, what adjective do you associate with Bunnahabhain? I’ve got one for all the other Islay distilleries. For me, Ardbeg is “overwrought.” Bowmore is “adulterated.” Bruichladdich is “precious.” Caol Ila is “underappreciated.” Kilchoman is “staid.” Lagavulin is “steady.” Laphroaig is “muddled.” I really struggle for a single-word recapitulation of Bunnahabhain. Perhaps today’s review will give me some inspiration?

This is cask #5716, distilled in 1989 and bottled in 2014 at 24 years of age, at 42.9%. I bought this bottle from the Berry Bros. shop in St. James’s Street back in 2016 for around £140. The back label informs, “Although generally a more lightly peated Islay this expression is an exception as it was produced from a batch of stock using barley at a higher level of peat-smoke exposure.” So I’ve got that going for me; which is nice.

On the nose: A creamy aroma wrestles against an iodine seashore note that is supported by the clean – never overbearing – underpinning of richly smoky smells. These exist in perfect balance, allowing taffy, ripe Gala apples, Meyer lemon, chocolate fudge, sandalwood, mocha, and fresh butter with sea salt to show through. Aromatically, this is the ideal Islay malt – intense, yet pure and clean; nodding unambiguously towards the sea, but grounded in all sorts of terrestrial goodness.

In the mouth: Starts with a warming buttery richness. Persists with a gentle but firm note of peat smoke, emanating some more smoothly lactic flavors through the otherwise dilute midpalate. Finally, an elegant, enduring marriage of harmoniously-balanced creamy, maritime, and smoky flavors lingers at the back of the throat.

As far as Islay mats go; this maintains the intensity of the elemental, without any of the lazy excesses of oak or smoke that so often mar drams from this region. My lone quibble is the comparatively weak bottling strength. All-in-all: pretty good. Bunnahabhain is not in danger of unseating Caol Ila as the Queen of Islay for me, but more consistent production at this level would certainly move it up my league table. I’m not ready to sum it up in a single word… yet. 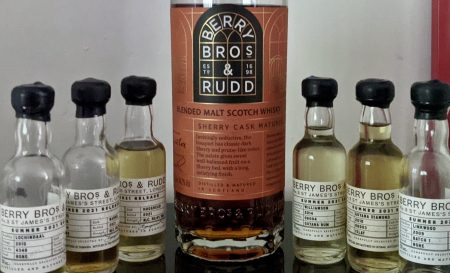