A Turkish proverb advises, “No matter how far you have gone on the wrong road, turn back.” I’m shocked to report that someone – a multinational beverage conglomerate, no less – seems to have actually taken this advice.

I’ve recently tackled the issue of opportunistic price increases in my review of Aberlour A’Bunadh, and my conclusion was: vote with your wallet. If a corporate owner chases profits by putting up the price of your favorite whisky, buy something else.

Can I be completely honest? I can’t believe that actually works, other than as a coping mechanism to help us poor whisky drinkers get by. I presume that these big corporations have big corporation buildings full of big corporation people (oh, and consultants) whose job is to research markets, segments, price points, and so forth. The profile is so high, the investment so great, that I cannot imagine there is less-than-comprehensive due diligence performed before undertaking a price increase or rebranding, much less half-rebuilding a distillery.

I would be wrong.

Jason contemporaneously weighed in on Diageo’s 2014 decision to undertake the “premiumisation” of Mortlach. In essence, this equated to bigger price tags on smaller bottles. Only four years in, this has proven to be a misstep (put kindly), so much so that Diageo publicly walked back the move last summer. Though there’s not an apples-to-apples comparison across the range due to difference in age statements, some back-of-the-envelope math indicates an average -60% price cut (adjusted for bottle size).

I’m as surprised as anyone to be saying this, but “good on Diageo.” It takes a lot of humility to listen to critical feedback from consumers. It’s difficult to engage in self-reflection and courageous to admit when a mistake has been made. Taking action to rectify these errors shows that someone at Diageo cares deeply about the integrity of their products and their relationships with their customer.

GAHAHAHAHA! They did it because they weren’t making any money, obvi! Mortlach quickly became an overt catastrophe, with distillers and brand ambassadors alike fleeing the listing ship like tartan-clad rats. Someone done messed up. I’d love to tell you that the guy (and it is a guy) in charge of this debacle got fired; more likely he threw some underlings under the bus and got promoted to Global Vice President of F***king With a Perfectly Fine Thing to Cop Some of Them Hot Renminbi.

What will be interesting to find out is whether Mortlach can reestablish the trust that they eroded through such a nakedly opportunistic money grab. As a prominent fellow Midwesterner put it: “It takes 20 years to build a reputation and 5 minutes to ruin it.” Judging by the coverage here on MALT, Mortlach have turned off their serious drinking audience with these shenanigans. The savvier sippers among us seem to have defected to the independent bottlings, as is the case with so many other distilleries that have lost their way under misguided corporate parentage.

So, we are back where we started from. By “we are” I mean “you are.” My good luck is that I’ve never tasted a Mortlach in my life, for better or worse. Until now!

To digress for a moment: my prior approach to a new (to me) distillery has been to opt for the entry-level whisky/whiskey/bourbon/etc. Since I’m not doing this for pay, I figure I’m writing these reviews as a public service. I surmised that my efforts were best placed by grabbing the same bottle that a normal punter would pick off the shelf and evaluating it as the benchmark for a given producer.

I’ve only just realized that I’ve been swindling myself. Of course, nobody sells their best whisky for $50/bottle! To make amends, I’m barbelling the new low-end Mortlach with a ridiculously expensive independently-bottled single cask. I’m worth it. Also, Jason informs us that a sherry cask Mortlach is the only way to go. Also, it was free.

In the mouth: Starts with a bright burst of tart kumquat. Immediately eases into a densely woody midpalate, transitioning through the richness of dried apricot into another sharply citric crescendo towards the finish. Long and warm through the back of the mouth, balanced by a clearly-delineated lingering mineral note. Throughout it all there is a weight to the underlying spirit; not heavy, per se, but massive. It provides inert ballast against the forceful influence of the sherry cask.

A glorious whisky. Packed full of smells and flavors. Clean, rich but fresh, and always finding equilibrium throughout every phase of its progression. You get what you pay for.

OK, on to the heavy lifting. I have spent my own hard-earned money on the lowest entrant in the Mortlach “truth and reconciliation” range. It’s named after a still. Yes, really. I can’t do any worse than their official description, reproduced here:

“An ode to our smallest yet most essential still, the ‘Wee Witchie,’ this 12-year-old Single Malt Scotch Whisky has been double-cask matured in both European and American oak to enhance the distinctively rich and robust character that makes Mortlach whiskies legendary.”

The more astute readers among you will note the lack of informational content in the above blurb. I purchased a 750 ml (remember those?) for $47 at Buena Park’s finest bottle shop. It is 12 years old, bottled at 43.4% and available from Master of Malt for £49.95 or via Amazon for £53.35.

Color: Dark carrot, with a luminous glint of Irn-Bru

On the nose: This hasn’t lost any of the signature Mortlach meatiness. This is distinct, yet hard to describe; variegated, yet monolithic. In the order that I am able to grasp the aromas: egg yolk, honeysuckle, the damply yeasty aroma of unbaked dough, some more richly buttery notes, vanilla bundt cake, and a hint of freshly-cut green stems.

In the mouth: Weak throughout. Flat entrance, with a faint, watery woodiness. This evolves a somewhat candied licorice note of Good & Plenty. There’s a bit of rich mandarin orange citric tartness, but – again – diluted, as though you’d squeezed one into a pint glass full of water. There’s the most flaccid burst of vanilla and cinnamon before the watery-sweetness of watermelon (out of season) and a hint of cigarette ash emerge as the only lingering notes on an otherwise unremarkable finish.

As an olive branch to aggrieved customers, this falls well short of making the necessary amends. It’s as milquetoast and dull as Diageo stablemate Dalwhinnie, and that’s saying something. Until Mortlach gets its act together, money spent on this official bottling seems a waste, even presuming a normal rate of failure on the independently bottled single cask offerings.

Lead image is an official photograph. And there are a couple of commission links within this review which as you can see never affects our opinion. 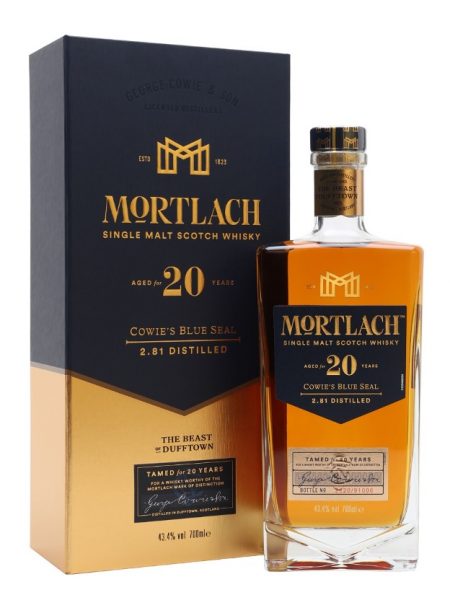