The identity of a whisky is paramount nowadays. Distilleries can spend copious amounts to design, build and foster a brand and identity for their whisky. The identity that matters to us here at MALT is when the seal is broken and the liquid is released. What resides in the glass is the true identity of the distillery, and that alone determines whether your purchase and time is justified.

I mention all of this because today we’re going to be looking at the new range from Glenrothes distillery, an oft-requested review from our readership. This is a whisky launch that has attracted a great deal of attention and debate from onlookers, as Glenrothes is a much-maligned distillery since various owners have buffeted it about in recent times. A distorted approach to a core range has unfortunately endured, and it has festered confusion as to what the identity of the Glenrothes truly is.

The only common strand of late seems to have been the bulbous bottle shape that has its critics, including us here at MALT. I detest the style and shape of the bottles! It’s a minor point, though, as the liquid truly overcomes all. At the end of the day, we know that the Glenrothes is capable of producing a good whisky—when it hasn’t been saturated in an aggressive cask. For several years, I thought the distillery was just the domain of the sherry monsters who lapped up youthful independent releases that were as black as soot.

Then there were the official single-cask releases that showcased a variety of ages and pleasant full maturation, devoid of a finish. Purer indeed, but again, more cask than distillate. The mystery continued alongside the suspicion that this distillery could do much better, underscored by bourbon cask releases such as this 1996 21-year-old from Cadenhead’s. Perhaps the return to the Edrington stable would now deliver a formulated and consistent vision?

At MALT, we tend to get around to whiskies when it suits us, as Mark explained during his 1973 Speyside review. Generally, we feel that the verdict matters more than the timing. As much as we’d like to bring you more current reviews, our pockets only stretch so far. This is where our Patreon supporters are now coming into play. Already beyond our wildest dreams, the monthly support covers our costs and gives our team a small thank you. Now we’re moving into a realm where we can purchase a bottle of interest to review, whether it is a blind tasting amongst the team, or in this case, involves tackling a newly-launched range.

To keep the cost of our overhead realistic, I purchased the four samples at the Pot Still in Glasgow for £30. This famous drinking landmark pours a generous 35ml measure. The keen-eyed amongst you will realise we’ve missed out on the 25-year-old that retails for around £270 and in the bar would cost you £40 a pour. I deemed this unnecessary for now; as great as it might be, that’s a hard price to stomach for any dram. Instead, we’ll cover 80% of the new range and see if the Glenrothes has a new identity worth shouting about.

This entry level 10 year old is bottled at 40% strength and will set you back £36.45 from the Whisky Exchange or via Amazon, with Master of Malt charging around the same.

On the nose: Fresh vanilla with a squashed blood orange for company – probably a few days old and well trampled. Lemon pip reminicient of a cleaning product and the sense that this is a very vapid and fleeting whisky. A touch of smoke, almonds and talc powder. The addition of water is not recommended at this strength. It reveals an unpleasant element of butync acid.

In the mouth: A promising burst of fruitiness is savegely halted in its tracks. The whole experience evaporates before it has truly begun. There’s orange on the finish but little else. Returning, reveals Custard Creams (vanilla and biscuit) and a gentle dusting of spices with nutmeg, cloves and cinnamon. Slightly trying towards the end as well. Don’t add water as this is very thin as it is.

Moving up a couple of years, this is still bottled at 40% strength and will cost £40.84 from Master of Malt or via Amazon, with £40.95 being the asking price from the Whisky Exchange.

On the nose: A slightly fruity arrival with a touch of spearmint moves into more feint orange notes and cracked walnut. Chocolate digestives reside along with lemon pip, rubbed brass and a mild cheap supermarket cheddar cheese. A hint of that green bottle Fairy washing up liquid oddly enough and ginger root. Don’t do water.

In the mouth: In a word; dull. A very simple and one dimensional whisky lacking identity and a sense of 12 years in a good cask. Fleeting orange and a gentle maltiness that moves into an unpleasant tannic finish. Water initially promises a fruity burst that soon vanishes into a murky melting pot of wood, best beyond blood orange and rum fudge.

This 18yo is bottled at 43% and apparently features a large element of 1st fill sherry seasoned oak casks in the mix. Price expect to pay £99.79 from Master of Malt or via Amazon, or even around £100 from the Whisky Exchange.

On the nose: More soft orange and sliced green apples. Again, delicate spicing with clove and cinnamon. Toffee with shortbread, milk chocolate and a dash of sherbet. Water doesn’t reveal a dynamic improvement and it better without. The only new arrival was a fresh black tea leaf vibe.

In the mouth: A touch more progression on the palate and oomph. A raw sponge mixture, orange zest and an element of yeast. A very gentle maltiness and chocolate orange. Water is should be used sparingly, providing a drying element and marzipan.

Bottled at a robust 48.8% this No Age Statement release is a mix of 1st fill sherry casks. It’ll set you back £50.95 via the Whisky Exchange or the exact same price from Master of Malt, or £43.42 from Amazon.

On the nose: Fresher and cleaner at least then it goes downhill. Some boiled fruits and orange zest with a vanilla toffee, mint leaft and mashed bananas. Water reveals more fruits and freshly spun cotton sheets.

In the mouth: More flatness where I was expecting life. Some marzipan, orange chews i.e. synthetic and a drying chewy finish. A splash of water breaks this fragile presentation. Leaving a murky festering liquid that could be from anywhere.

Back to the beginning and the 10 year old is frankly well made and has promise but has been butchered by whoever decided to bottle at 40% strength. Ok, you could argue it is a beginner whisky and a stepping stone into the range. Possibly, if it wasn’t for the fact that after this one you really have little motivation to continue with any discovery, or at least chop £15 off the asking price. The 12 is a tiny step forward. Again, limited by the strength and overall presentation. A growing frustration was hitting me that Glenrothes is a solid malt, but this isn’t being harnessed or respected by the owners.

The 18-year-old doesn’t taste it’s age whatsoever and whilst it continues a upward trend, it is overpriced (hence a point deducted) and very timid. I’m still struggling to find the identity of this Glenrothes range other than wallowing in disappointment. This is trench warfare with a high rate of attrition.

The last chance saloon is the Whisky Maker’s Cut – whatever that is meant to be? Some promise initially with an ok nose and then a limited palate is stripped bare with the addition of water. Is this truly what Glenrothes is? I am entertained? I am furious? I am cheated? Do I really want to give this distillery another chance on the basis of these official releases? So many questions that are dispatched due to the overriding sense of disappointment. If this is what they want to serve up to showcase their distillery and whisky then good luck; you’re gonna need it pal.

Images from the Whisky Exchange and unlike others we love to highlight that there are commission links within this review. Such things do not influence our opinion. Our thanks again to our Patreon supporters for making this article possible. 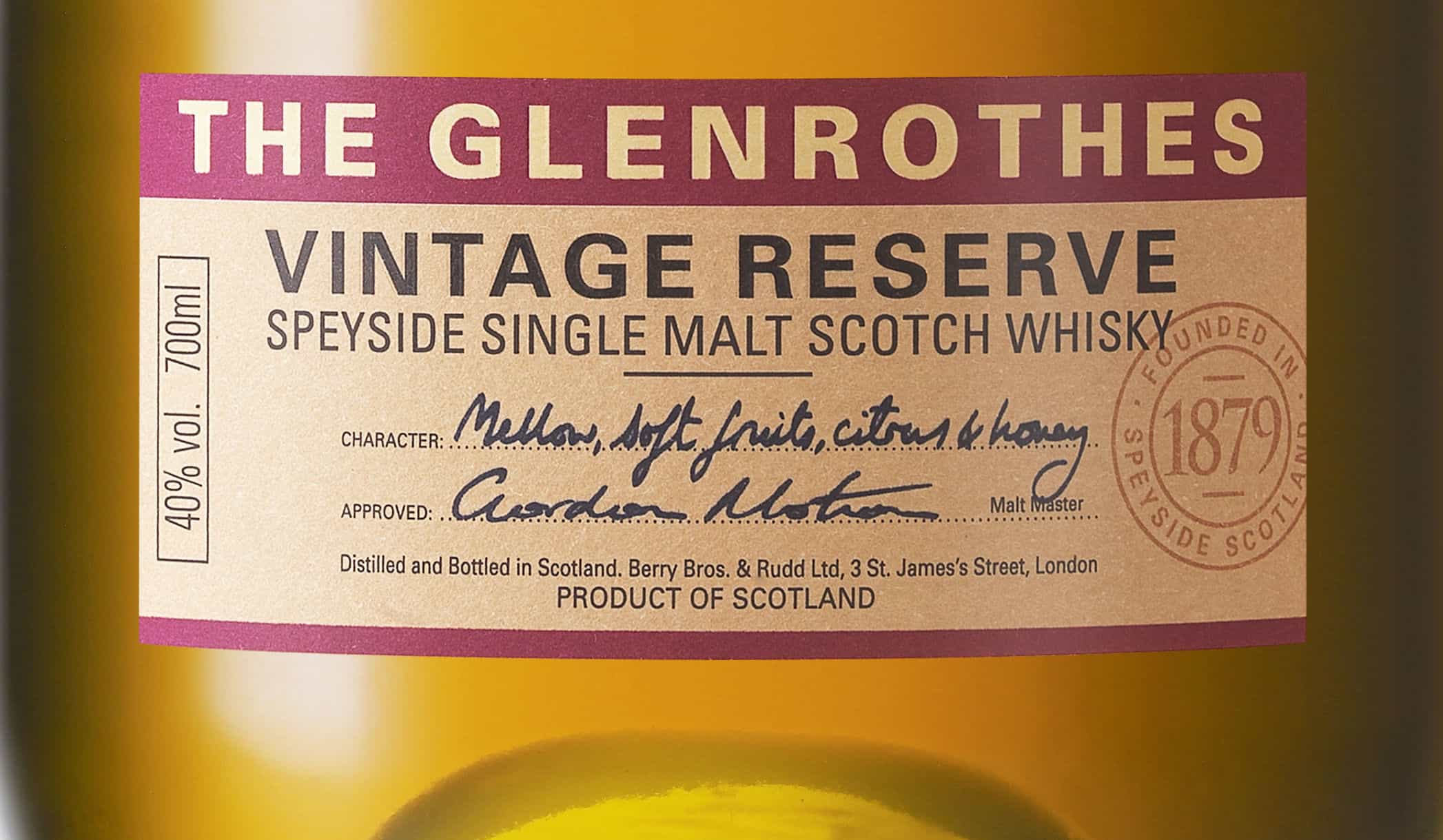