One of the fun things about having a 5-year-old boy is introducing him to the scientific method. We find things that interest us, formulate hypotheses about them, test out our ideas, and use our powers of observation to note the results.

For all the ill-tempered harrumphing we do here at MALT, I’d like to think there’s a shared appreciation for the spirit of experimentation, even when the results fall well short of perfection. Certainly, the team are big supporters of (and in one case, employee of) Waterford Distillery, probably the example of the most extreme commitment to this ideal in the world of whisky.

Though not quite the purists that Waterford are, the folks at Jefferson’s Bourbon have been aggressive in their experimental approach. They don’t do their own distilling, instead sourcing whiskey from elsewhere (a practice recently examined by Adam); it seems like they mostly rely on Kentucky and Indiana. Jason previously took a look at some samples from the Jefferson’s range here.

Where the company does focus their attention is on the maturation process, and in pushing the boundaries thereof. The brand gained fame for the Ocean series of whiskies, which have been aged at sea on the deck of a ship (recently described by Alexandra in her comprehensive piece on alternative and accelerated aging).

Today we’ll be considering the Wood Experiment series. Jefferson’s website has a detailed description of the genesis and process of this experiment, which I’ll not reproduce here, save to say that it entails maturing four-year-old bourbon for an additional 32 months in 13 different types of vessels. The results have been bottled for us to try.

As I’m in a scientific mood, a word about my own methodology: I first tried these side-by-side simultaneously in ascending numerical cadence. I then went back and re-tried them individually, over a few days, in reverse (descending) numerical order. When possible (on the second go-round), I let these rest in the glass for a few hours prior to sampling.

They’re all Straight Bourbon Whiskey, distilled in Indiana, and bottled at 46%. These are sold in a boxed set of 5 x 200 ml bottles, which I picked up for eighty dollars. For the purposes of using MALT’s gently price-sensitive scoring bands, I have evaluated these as though a 750-ml bottle of each cost $60. For my high school science teachers who insisted that I show my work: $80*(5*200 ml)/750 ml = $60. A Jefferson’s Wood Experiment Box Set #2 is available on Master of Malt for £111.77.

Color: These are all the same golden-copper color.

In the mouth: Piquantly estery to start, with a burst of acetone. Some milky grits-type flavors on the front of the tongue. Good balance of sweetly corny flavor and salutary interaction with the wood. A bit of a non-entity through the middle and back of the palate, with only some faintly creamy flavors of lemon yogurt. Just a bit of resinous woodiness on the finish. I’ll use the freighted descriptor “smooth” on this one.

Straight-down-the middle bourbon. Light and sweet in style, without a ton of depth, but no rough edges or off notes to speak of.

On the nose: More woody depth here. There’s a mellow richness to this, with some red fruits and varnish aromas starting to emerge. Freshly-baked cherry pie, and a wine cellar full of Cabernet Sauvignon barrels. A bit of a vegetal note.

In the mouth: Similar richness to the nose; polished wood; plumply fruity through the mouth, though again with a celery-like green note on the short finish.

Not necessarily an improvement; the cubes seem to have added some body to the benchmark #3 spirit, but with the drawback of an extracted immature, woody nuance.

On the nose: Roasty initially, with a spicy note of cinnamon and crushed red pepper, though this dissipates quickly, with little aromatic follow-through.

In the mouth: This is less forceful on the palate than either #3 or #4. It is wispy, disappearing immediately without either grain or wood making a forceful case for themselves. Finishes with the most dilute aftertaste of metallic tangerine.

Weak. The staves seem the least effective in adding anything in the way of aromatic or gustatory character. No off notes; barely any notes at all.

On the nose: Floral perfume notes, Praline, a fruity touch of kirsch, and a subtle sweet-and-meaty aroma of honey baked ham.

In the mouth: Starts with a brightly floral note of rosewater, becoming pertly woody at midpalate, ending with an earthy note of red soil. Lighter-bodied, but not lacking in flavor.

Nicest of the bunch thus far. Tastes like a complete whiskey, whereas the rest have been rather one-dimensional. The interplay of the oak types seems to have brought out a broader range of flavors, though I’d be more interested to try this at cask strength.

Color: Wait for it… golden copper.

On the nose: Less expressive than the #10, but still has some noticeable richness. Vanilla pound cake and light honey. Rum raisin, and some more exotic notes of eucalyptus and sandalwood. Coffee, red berries.

In the mouth: A burst of creamily sweet vanilla becomes a surprisingly austere saline note. Has a somewhat gamey aftertaste, not in a good way.

After a promising start, this becomes a bit awkward at the back of the palate.

I think clear differences exist, though they’re exceedingly subtle in some cases. How much of the variation is attributable to the changes in maturation methodology, rather than normal cask-to-cask differences? Impossible to say. I don’t know that I’d be able to blindly pick out a cask influenced by the addition of an oak cube vs. one with an oak insert. But, tasted attentively alongside one another, I am able to notice that there is some deviation from the mean.

That said, this is more illuminating as a demonstration than it is convincing as a proof-of-concept for any single method of augmented maturation. None is compelling enough that I’d run out and snatch up a bottle if one were offered at $60.

As a comment on Jefferson’s more generally: they’ve successfully built a brand on sourced whiskey and bold experimentation. At $80/bottle, I’m not sure I’d pick up a bottle of their Ocean bourbon as a curiosity, though. In the year 2019, what piques my interest in the world of American whiskey is craft-distilled spirit, ideally with a strong connection to the grain source and a commitment to integrity in production and maturation. These brave souls are—in my opinion—the true pioneers, and I’ll use my limited resources to support their forays into the unknown. 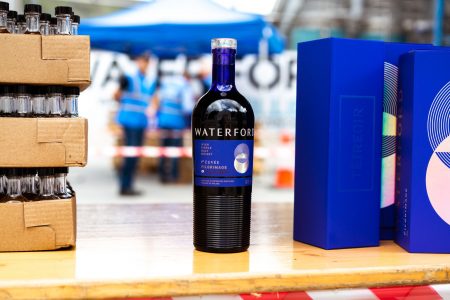