Objectivity, integrity, transparency, truth. These are concepts (pardon the pun) that we discuss frequently here at MALT. Lots of the criticism you read from us is grounded in the ideal of maximum independence; MALT attempts to be free of the considerations that might create a conflict of interest, or even the appearance of a conflict of interest.

This takes a few forms. The first, as you may have noticed, is that the site does not have any paid advertising on it in the form of ads. Commission links are occasionally embedded within articles, though these are always noted as such and – more importantly – do not affect the scores. My own recent review of the Glenlivet 12 was a point-in-case; readers could have clicked through to buy a bottle of the whisky I called “perhaps the most pointless age statement in existence” and rated a 3/10. I haven’t checked, but I doubt the MALT coffers were filled following that less-than-effusive assessment.

MALT doesn’t do paid content, and we clearly disclose when a sample was provided by a third party of any type: distillers, independent bottlers, retailers, barmen, and even friends (though this latter type of disclosure serves as more a type of public acknowledgement of an individual’s generosity). In total, I’d say Mark and Jason have done a comprehensive job of removing the financial incentives for anything less than an unvarnished assessment of a given dram. On the whole I assess these policies as highly effective, and it’s part of what makes me proud to contribute here.

However, a financial reward for a good review is only one form of potential bias in whisky reviews. Without impugning the ethical standards of any of my colleagues, I am considering here those other types of subjectivity and prejudice that will inevitably creep into our work. No matter how pure the heart or keen the intellect, Kahneman and Tversky have shown us that we’re all the unwitting victims of accumulated cognitive biases of one kind or another.

This meditation, in particular was prompted by a recent back-and-forth on Twitter in response to another review on this site. The argument was, in essence, that saying something negative about a distillery (or the shape of their bottles) was proof of a lack of objectivity that compromised the integrity of the subsequent whisky reviews.

The maximally skeptical view would be that there can be no objectivity in whisky reviews. How could there be? We’re talking first about colors, aromas, flavors. These are filtered through our noses and mouths, which are all differently attuned. However, there’s enough commonality (the presence of smoky aromas and flavors in peated malts, for example) that my tasting notes are of some general utility to people who aren’t me (that’ll be most of you).

Then comes the critical assessment, which is inherently subjective. She likes peat, he hates it. He has a high tolerance for sulfur, she can’t stand to sniff a knackered sherry cask. What is pleasing to me is boring to you, and vice versa. Throw in the fact that MALT’s scoring framework includes an assessment of value for money (itself the subject of Nobel Prize winning work in economics), and it’s a wonder that anyone reads these at all!

Assuming that you have perused enough of my reviews to know that we have generally similar tastes in whisky and assessments of good value, you could be forgiven for still being skeptical of my objectivity. After all, I come to this with some experience (tasting lots of whisky, visiting distilleries on several continents, and having done a fair deal of research), but also some prejudices. Some of these may be rational, or at least empirical (I have had a lot of not-very-good official bottlings of Glenrothes), but some of them may not be (romantic attachment to Japan; a poor tour guide or irritating brand ambassador).

Some of this makes me a better critic – I am knowledgeable, I have a frame of reference for a distillery and distilleries like it. I have tasted better and worse examples of many styles of whisky and can place each new one somewhere along that continuum. Some of it, on the other hand, will taint my perceptions. I’ll excuse away flaws and emphasize strengths of whiskies I am positively predisposed towards, or I’ll underrate drams from distilleries I’ve already decided I don’t care for.

There’s no way to resolve this, other than to be conscious of my biases, to acknowledge them, and to question myself constantly. In that spirit, I am revisiting Macallan after a comprehensively disappointing (but really, really fun to write) run-in with their travel retail exclusive Concept Number 1.

My bias in this case – put bluntly – is that I believe Macallan has become whisky for the type of people I wish didn’t drink whisky. Yes, their marketing materials lapse into self-parody, so overwrought is the meaningless pablum they produce by the truckload. Yes, their sprawling range expands in size to match the steady increase in prices for their trophy drams. When you do get your hands on a bottle they’re pretty good, or would be for 50% less than what you paid.

What really rankles me, though, is that the stupidest and most superficial people on the internet seem to worship Macallan, when they’re not flipping it. It’s whisky for the Instagram-and-auction set. Whisky for those people who want to photograph a bottle, collect a load of likes, and then sell it on it for a tidy profit. The whisky itself is incidental – it could be a share of Apple, Amazon, a Ferrari, a Rothko painting, or a bitcoin. Macallan is something to be acquired, bragged about, then sold.

To quote the other Taylor, “At least, that’s what people say.”

Being completely honest, there’s a deeper source of potential bias for me. In my heart of hearts, I worry that Macallan whiskies – some of them, at least – are really very good indeed, and I’ll be forced to admit that. I worry, in part, that liking them will earn me the bemused disdain of my peers. Mostly, though, I’m concerned that I will crave them, need them, not be able to live without them. Perhaps they’re even good enough to justify the premium to comparably-aged Speyside malts? I’m keeping food on the dinner table, but I certainly don’t have the whisky budget to support regular purchases of bottles in the $250+ range for everyday consumption.

Fortunately, I have a generous benefactor in the form of Carl, who has agreed to a regular swap of samples with me. He gives me stuff he think’s I’ll like, I give him stuff I think will be educational. We both get to taste more broadly, and we have some fun back-and-forth about our relative likes and dislikes. It’s perfect whisky symbiosis, and I am once again grateful to him for having provided the three drams being considered today.

In the spirit of objectivity, I’m trying to set aside everything I think, or know, or think I know about Macallan. I am researching these as diligently as any other dram, and I am evaluating them in their context, which includes their price. Judge for yourself whether I have maintained my objectivity:

Both ranges share in common the maturation of the whisky in “European and American sherry seasoned oak casks and ex-bourbon American oak casks.” This whisky is bottled at 43%. My local liquor superstore still has bottles on the shelf for $240.

In the mouth: Light and airy to start, witha gently sweet note of buttery wood. More taut, astringent wood flavors move across the middle of the tongue in consecutive waves. Soapy texture at the top of the tongue, with a nippy bite of lemongrass. This finishes with a teasing wisp of ground cinnamon, floral perfume, and pine sap before disappearing into a vaguely sweet rosewater flavor.

This has a lot going for it on the nose, where I feel that the interplay between the three cask types is most convincing. There’s a range of aromas, each distinct, but balanced and mutually reinforcing. The palate doesn’t really deliver in terms of breadth or depth of flavor. It’s weak mostly, and where it does assert itself there’s an angularity to the wood that lapses into bitterness. As far as value for the money: there isn’t any.

The next two are bottles from the Sherry Oak range, “matured exclusively in hand-picked Oloroso sherry seasoned oak casks” per Macallan. We have here a mini-vertical, comprised of the 2017 and 2018 releases of the 18 year old expression. This is a bit of a thrill for me; I have long wondered about batch-to-batch variation in single malts but have never had the chance to taste expressions side by side which are identical but for their date of release. All that changes today! These currently retail for $280 near me, and are also bottled at 43%.

In the mouth: Starts bitterly, with hickory wood and tart lime peel. Chopped semi-sweet chocolate is the high point. Again, the wood influence crescendos with a pointed bitterness at the middle of the tongue. There’s an uncanny note of private label supermarket cola. Texturally the finish is similar to the 17 year old, as this lapses into a muddled and watery mix of vaguely earthy flavors.

Not nearly as intriguing on the nose, and about as disappointing in the mouth. Paying a price in the high-$200’s could get you access to a Speyside malt matured for 20+ years in a high quality sherry cask (Cadenhead’s Linkwood 1989, for example, is $270 “over by here” in the local parlance) with something to say for itself. Instead, you pay for the privilege of letting Macallan’s master blender blend and blend and blend and blend this beyond coherence.

On the nose: A bit less expressive than the year prior. The meaty notes are not as rich; think roasted turkey breast. There’s the rubbery sweetness of freshly-tapped natural latex. A faintly cheesy whiff of shredded mozzarella. Golden raisins, chocolate-covered orange slices, and baking spice round it off.

In the mouth: Less intense, but also less bitter than the 2017. A fairly toothless milk chocolate flavor marks the transition to the midpalate, which has the coffee-plus-water sensation of caffé Americano left to cool. The only real notes of interest are a graham cracker flavor and some caramelized banana that poke their heads out for a microsecond before this sloshes down the gullet. Again, there’s little delineation of flavors on a finish that has the weak roastiness of the dregs of an iced coffee.

This has fewer of the aggressively woody notes of the 2017 release, but sacrifices a lot of flavor to get there. Pick your poison? As before, $250+ should get you so much more.

Hallelujah, I’ve been saved! I don’t need to take out a third mortgage to keep the cupboard stocked with these drams that, while offering some appealing points, ultimately collapse under the pressure of their price tags. At $100 these would be competing with Glenfarclas 17 years old, itself a very nice sherried Speyside dram. At their current prices, they exist for those who will never consider whether these will offer good drinking value for money, namely: people who will never drink them.

So, for all the studied consideration I gave these, I’m back where I started from. Is this my failure, or Macallan’s, or both? Did laying bare my insecurities only serve to subconsciously reinforce them, and indeed yours? Am I pandering to a select group of readers who I know share my biases and heuristics? Most importantly: is all of this objective enough?

The world may never know… but seriously: don’t buy any of these whiskies.

Images from the Whisky Exchange. 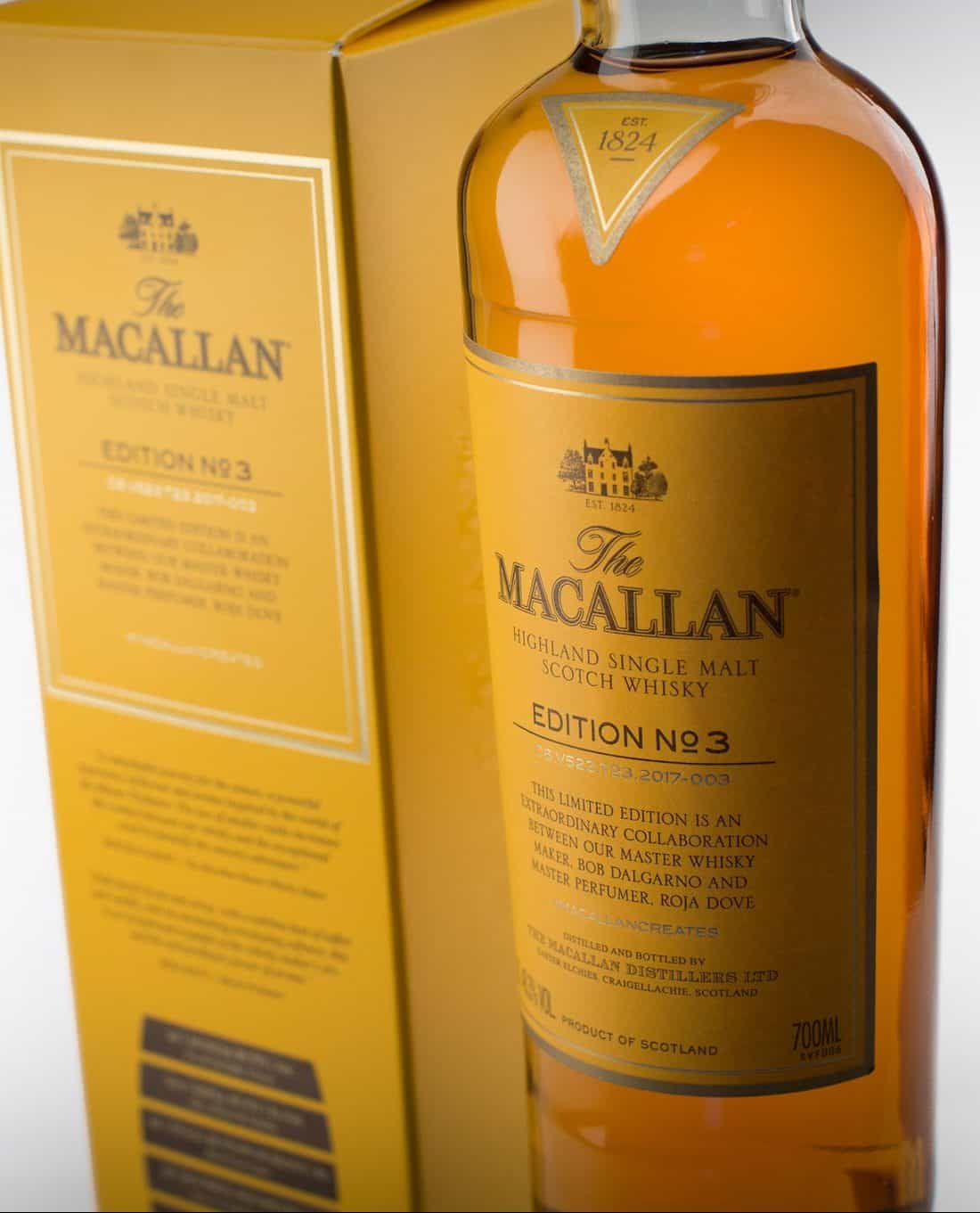