I suppose it’s funny to remind ourselves that whisky distilleries wouldn’t actually be here without people loaded with cash. I don’t mean tasteless Macallan collectors. No, I mean actual people who actually invest their actual cash into somewhere and hope to god the project doesn’t fuck up.

I assume that is the reason this whisky exists, although there’s a charity angle to it as well so take everything I say here with my tongue firmly rooted into my cheek. Indeed, none other than the Lord Mayor of London – a fellow named Peter Estlin – is a supporter of the Cotswolds Distillery who has, “at his request” blended some of his personal stash of barrels.

The “at his request” entertains me somewhat. “Make me some whisky, bitches” is pretty much what I imagine and, if we were Lord Mayor with some whisky barrels stashed here or there, I think we’d be singing the same tune. But I can’t be too harsh, as some of the proceeds go towards the Lord Mayor’s Appeal, which is all lovely I’m sure. The best bit about it all is that we get another ace whisky from my favourite new era British distillery, the Cotswolds Distillery.

Look, we’ve talked about – specifically myself and Adam have talked about – this place a lot. So go back in time to read the usual intro to who they are. Currently, they’re making great headlines and doing great things and gradually taking the slow steps from craft distillery into being something of a brand. They’ve done it the slow way – they made gin, a very decent gin (which admittedly isn’t saying much, as gin is boring) themselves, but it’s their gin. They’ve made lots of other things too, but they have made it.

They haven’t sourced any whiskies and sold it under their name, they’ve not run crazy investment Ponzi schemes, they’ve just made products and expanded what they do bit by bit – a new warehouse here, a new distribution deal there. There are no overnight successes in this game, even though it might seem like that; just slow and steady effort. That’s quite admirable, in and of itself – if not necessarily glamorous; because what that does is retain the integrity of the brand, and there’s not much integrity left in the whisky industry.

Yet that does depend on investors, reliable people who believe in a project – as, I assume, is the case with the Lord Mayor, who has demanded a whisky be made from his barrels.

It’s made from Odyssey barley, a variety favoured by distillers – similar to Concerto in many respects, which is also very popular. The barley was grown locally before being floor-malted at the Warminster Maltings, which lies a couple of hours south-west of the distillery. The Lord Mayor’s barrels were ex-Bourbon casks and shaved, toasted and recharred (STR) American Oak red wine barriques, the trademark barrel of the late Dr Jim Swan used by quite a few new distilleries. Separate to this, they filled a bit ol’ 500L ex-PX Sherry butt for three and a half years, and that was then blended the other barrels (I assume this PX cask didn’t belong to Lord Mayor). 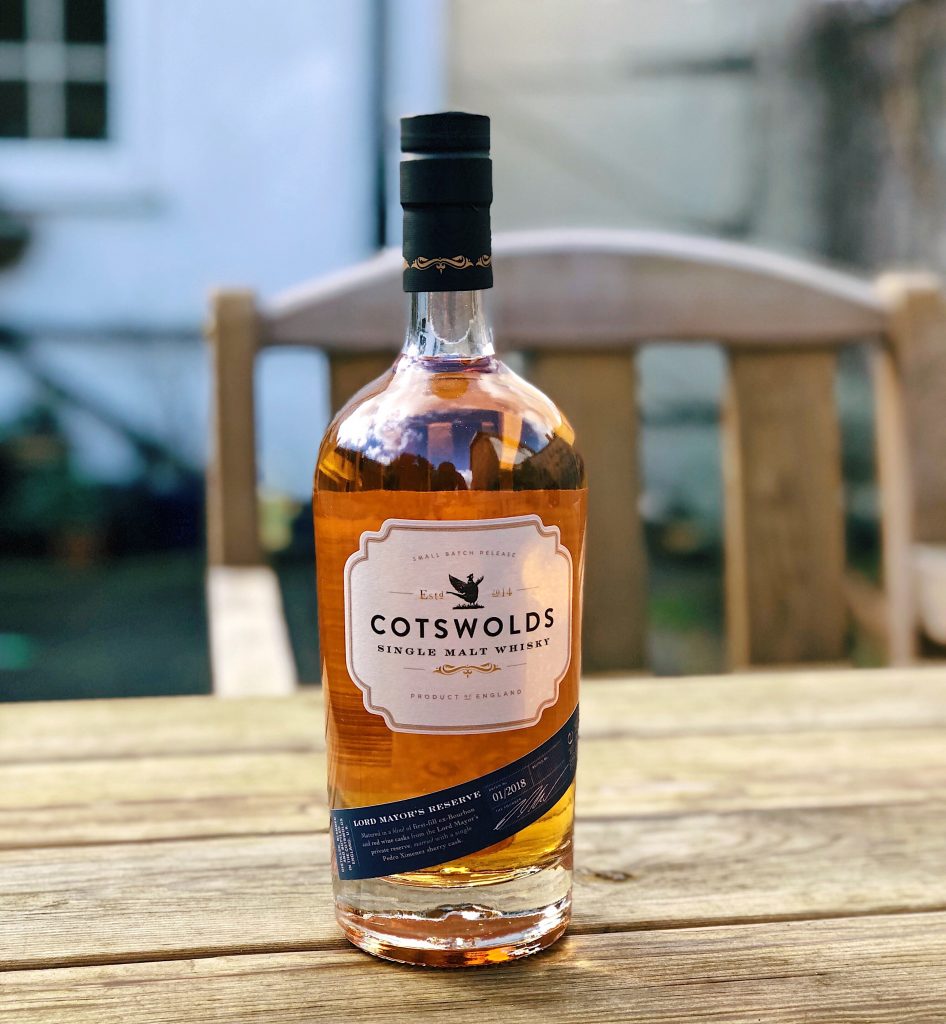 Colour: deep copper, plenty of colour for something so young. Which means good casks.

In the mouth: lovely silky texture, touches of Sauternes at first; a warm spiciness, not a million miles away from a rye whisky perhaps, but charred meats, caramel. Walnuts. The maltiness is more apparent than the nose, and that mingles with the cranberry sauce and blackberry notes nicely. Slightly husky and hoppy even,  but doesn’t quite have the depth of other releases. That said, there’s something deeply pleasant going on here, a mellow quality that transcends the rest.

It’s been a good while since I’ve found a great everyday drinker – something that works on the non-analytical level perfectly, and that’s where this really comes to life. I don’t mean that in a negative way. Sometimes the individual flavours don’t stand up too much to scrutiny: they’re not fully developed, and this is a young whisky after all. But those flavours come together to present something greater – in this case, it’s all just harmonious, mellow.

So though it isn’t my favourite of this distillery’s outputs, I remain delighted in their consistency for producing just really tasty, affordable, well-made whisky that uses regional barley and good production processes.

And for those of us who aren’t pilfering whiskies for auction, but opening bottles and enjoying them: do we really need anything more than that?

Note: whisky kindly sent over to Malty Towers, which certainly helps me to save for my kid’s nursery fees, though doesn’t sway opinions because we’re miserable etc.