Fans of whisky today find themselves in a time of almost certainly unparalleled choice. From new distilleries opening across the globe at a rate of knots, to the regular new releases from established names, to an endless stream of indies. For those with the inclination and means, there remains the hazy territory of whiskies gone by, made increasingly convenient to explore through online auctions. At the same time, the past is also the future with the plans afoot to resurrect the venerable distilleries of Brora, Port Ellen and Rosebank. Truly these are interesting times.

The ever-increasing volume of whisky flooding the market should be good news for customers, at least from an economic theory perspective. Greater competition should help to keep prices in check and push producers to pursue the highest possible quality to distinguish themselves from the competition. For balance, I should say that other strategies, of course, are available, such as aiming to bamboozle with marketing bumf or partaking in an efficiency race-to-the-bottom to squeeze every penny from existing products.

In this current landscape, the customer faces a consequence of this vast array of options: that is, where should I spend my money? Decisions can be hard at the best of times, and increasing the number of valid choices rarely helps. One may turn to logic, as encouraged by the Vulcans of Star Trek fame, but logic will take you only so far. A poignant demonstration of this can be found in the story of an unfortunate man known only by the alias Elliot. Following surgery to remove a brain tumour, Elliot’s life took a series of dismal turns after an apparently successful operation. In seemingly good health and with full mental faculties he nonetheless lost his job, his savings and his wife in short order. It took a long while for dedicated doctors to work out what was wrong: Elliot could no longer experience emotions and viewed the things happening to him in oddly detached terms. Left with only his logical faculties to fall back on, the simplest of tasks was impossible; say, picking a box of cereal from a supermarket aisle, or deciding on the best way to file paperwork. Our emotional attachments and values, then, guide our decisions, perhaps more than we might think; indeed, without them; we are lost.

I am fortunate not to suffer Elliot’s affliction. I can manage the likes of cereal selection (either porridge or crunchy nut) and workplace filing (an unruly pile of papers on my desk). I will admit to having trouble at times with more open-ended choices, though, such as holidays. There are so many potentially interesting places to visit around the world, within relatively easy reach, that a bit of “paralysis by analysis” can creep in. I count myself fortunate that my work regularly takes me on jaunts to various cities across Europe: essentially, free trips to places that I might otherwise have never seen.

A couple of years back, a trip rather further afield presented itself when Dora (Malt’s other recent upstart contributor) and I were invited to a friend’s wedding in Taiwan. An easy decision: we were honoured, and of course, said yes. Wishing to make the most of the trip, on top of a couple of nights spent at stunning wedding venue (Sun Moon Lake), we planned an itinerary that took us almost round the whole island. I shan’t bore you with a lengthy recounting of “what I did on my holidays,” but suffice to say, we had a wonderful time, and never tire of recommending this beautiful yet compact island to anyone who will listen.

In amongst the various bustling night markets, peaceful temples, sleek high-speed trains and sketchy mountain-road moped rides, there had to be—of course—a visit to the juggernaut that is the Kavalan distillery. Situated on Taiwan’s picturesque Pacific eastern side, the site sprawls across a green and verdant landscape flanked by steep-sided, tree-covered hills. Noortje covered Kavalan’s genesis in her review of the Solist bourbon cask back in February of last year, as well as her thoughts on the tour. The scale of the distillery truly is impressive, although it trades off against a lack of real character, in my opinion. We self-guided round the various buildings, as we weren’t organised enough as to call ahead and arrange an English-speaking guide! I imagine the experience would have been improved if we had. We rounded the visit off with a decent lunch and a very reasonably priced tasting, in which you can sample the vast majority of whiskies from their range in their swanky tasting bar. On the whole, then, Kavalan distillery was worth the visit, without being staggeringly brilliant.

Enough rambling; time for a review of some of the product. We brought a couple of miniatures back; amusingly, they represent the only two Kavalan whiskies to have already been reviewed on Malt, by Noortje and Phil. May as well revisit both!

You can pick this up from Master of Malt for £67.62, or for a few pence more via the Whisky Exchange or a mighty saving over at Amazon for £62.71.

On the nose: intense sweet vanilla, akin to Regalice and vanilla sponge or Madeira cake. A nice fruitiness of apple jam. There are hints of oak spiciness throughout alongside cracked black pepper.

In the mouth: the texture is nice; oily, but not hugely so. It is intensely sweet up front, but the oak spice notes come through stronger on the palate than they did on the nose. Still big on vanilla and sweetness, but it is checked reasonably well by pepperiness, which lasts into a medium-length finish. Adding a drop of water also helps to reduce the sweetness, further bringing out pepper and sandalwood.

On the nose: a little aggressive at first, with some sharp, earthy notes of oloroso sherry. A red berry fruitiness comes in, and on top of that, a nice oiliness; perhaps linseed oil.

In the mouth: noticeably thinner than the ex-bourbon oak offering, it is bottled at significantly lower strength. It begins with white pepper, a tannic cask aspect and a hint of orange peel. After a couple of seconds, it becomes sweeter, with a nice combination of red berries, a touch of darker fruit like prunes, and barley sugar. This lasts through to a medium/short finish without much in the way of modulation.

Both these offerings from Kavalan were fine without setting the world alight for me. The ex-bourbon was consistent from the nose to the taste but lacked somewhat in complexity. The sherry oak shaded it slightly, having a bit more character to it, but the bottling strength may have held it back a little. I have sampled a few other whiskies from Kavalan over the last few years,’and these fall somewhere in the middle. I’ve had a better experience with a couple from the Solist single cask series, but the price is considerable, particularly in the UK. Rather than splash out on these, I’d recommend diverting the pennies and pounds to your travel fund and checking out Kavalan (and the rest of Taiwan!) for yourself one day.

Lead image from the Whisky Exchange. There are commission links within this review if you want to make a purchase – such things don’t influence our opinion. 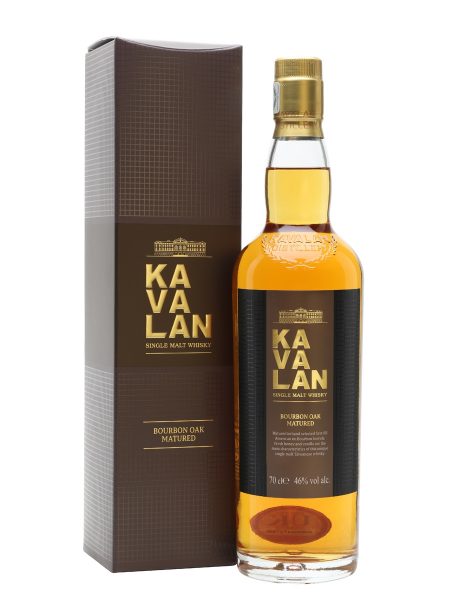