At last, I am reaching the top of the Buffalo Trace mountain. It’s been a long uphill climb through Weller Special Reserve, Blanton’s, and Stagg Jr. Today, I have the good fortune of reviewing not one but five(!) expressions from the fabled Van Winkle family of bourbon whiskies.

Fate smiled on me recently when I received an invitation to a tasting of Van Winkle bourbons at Wrigleyville’s Big Star. The restaurant’s original Wicker Park outpost has long been a mecca for lovers of tacos, whiskey, and loud country music. It’s the kind of place I’ll be taking the MALT crew once the planned “Chicago Whiskey Fest 202?” finally materializes.

As the big day drew near, I began my background research in earnest. As noted in my prior reviews, it’s always worth doing one’s own investigations into the genesis of these brands, whose names swirl around in the evanescent mists of whiskey folklore. As a rule of thumb, those of us inquiring after the truth can rely on half of what we read and even less of what we hear.

Thus, a history of the “Old Rip Van Winkle Distillery” begins – surprisingly – with the revelation that no distillery with this name ever existed. The story of Van Winkle bourbons is actually two stories. The first is of people in the Van Winkle family line. The second is of a distillery called Stitzel-Weller. Research from multiple sources has produced the intertwined narrative below, edited for clarity:

The diminutive Julian P. “Pappy” Van Winkle Sr. (all five-foot-six-inches of him, or roughly 1.35 Adams) had been a traveling salesman for whiskey wholesaler W.L. Weller since the age of 19. He and a partner purchased the A. Ph. Stitzel distillery, the source of Weller’s bourbon. A merger of the two businesses resulted in the construction of the Stitzel-Weller Distillery in 1935. Pappy passed away in 1965, with a lifetime of bourbon drinking and cigar smoking not impeding his progress to the ripe old age of 91.

Julian Jr. (I feel that not calling him “Sonny” was a missed opportunity) ran the Stitzel-Weller distillery until 1972. At that time, so dire were the prospects for bourbon demand that family shareholders forced a sale to conglomerate Norton-Simon. The Van Winkles were able to acquire aged stocks from the distillery, renamed “Old Fitzgerald,” in order to continue the production of Old Rip Van Winkle bourbon, for which they had retained the trademark.

In 1981, Julian III (Pappy’s grandson) took over the family business, which was then mostly engaged in the production of bourbon in kitschy ceramic decanters. At this time, the waters become a bit muddied. Stitzel-Weller/Old Fitzgerald stopped bottling bourbon for the Van Winkles. Julian III started sourcing aged stocks of bourbon from the defunct Hoffman Distillery in Louisville, eventually purchasing the plant for its bottling operations and barrel storage for $80,000 in 1983 (sadly, the property, plant, and equipment were sold again in 2002, also for $80,000). The Van Winkles then began procuring bourbon from a wide range of distillers, including Wild Turkey and Old Boone. A 15 year old “Old Rip Van Winkle” expression was first released in 1989; comprised of Old Boone stocks, it was notable for its high rye (not wheat) mash bill.

A waterfall of acquisitions resulted in the (former Stitzel-Weller, now Old Fitzgerald) distillery being acquired by Guinness, then becoming part of United Distillers, which closed the distillery in 1992. The Van Winkle family soldiered on, utilizing Old Boone stocks and whatever barrels remained from Stitzel-Weller. The 20-year-old expression (the first to bear the name “Pappy” and the iconic photograph) was released in 1994. Four years later, the inaugural 23-year-old bottling was released using aged stocks sourced from the old Stitzel-Weller distillery, which were distilled with the (now famous) wheated mash bill.

Preston (great-grandson of Pappy) joined the family firm in 2001. The Van Winkles had been sourcing whiskey from the recently-renamed Buffalo Trace distillery and decided to formalize a partnership in 2002 (the family retains majority ownership in the partnership). Buffalo Trace had acquired the Weller brand from Diageo in the late 1990’s, and there were obvious synergies from emphasizing the shared wheated mash bill. The 15-year-old “Old Rip Van Winkle” was replaced by the 15-Year-Old-Pappy expression in 2004, giving us the lineup we see now. The mothballed Stitzel-Weller distillery was resurrected (sort of) in 2014 as the visitor’s center for Diageo’s Bulleit brand.

That, my friends, may be the most meandering whiskey tale I have ever heard, and it’s not for lack of serious competition. To summarize: the Van Winkles went from selling someone else’s bourbon, to distilling and bottling their own bourbon, to bottling bourbon they had previously produced, then to bottling a lot of other peoples’ bourbon and some of their own, and finally to having Buffalo Trace produce and bottle bourbon for them, which is where we find ourselves today.

Let’s consider the whiskey itself: what is it that makes these bourbons so flavorful in comparison to, say, Weller, which is distilled from the same wheated mash bill? The secret, per both Preston and the folks at Buffalo Trace (who kindly answer my interminable stream of questions to the extent permitted) is barrel selection. Warehouse location, and position of barrels within the warehouse, is the determining factor in deciding which bourbons feel the maximum salutary effect of temperature and air flow. The Van Winkles (père et fils) are given “first crack at barrels from the best parts of the warehouse” according to Preston, namely the first and second stories towards the center of the building. Whereas Burgundy has the 1.88 golden hectares of Romanée-Conti, the “Grand Crus” of bourbon are delineated by building and rick.

As I noted in a review of wheated sibling Weller, the Van Winkle bourbons are now among the most sought-after bourbons – nay, whiskies – in the world. Roughly 9,400 cases of annual production (with plans to double this quantity within six years) are far from sufficient to satiate demand. Such is the incentive for malfeasance that Buffalo Trace has gone as far as to spend $500,000 per year on anti-counterfeiting efforts.

These bourbons are released each fall, with distribution varying by state. Some places conduct a public lottery; in others, favored customers (retailers, publicans, deep-pocketed bourbon enthusiasts) get allocated bottles selectively. The majority of bottles seem to find their way to auction where, predictably, the going rates are far above suggested retail prices.

So, how to assess these fairly within the gently-price-sensitive MALT scoring framework? I have noted both retail and auction prices below, for the reference of anyone thinking about picking these up on the secondary market. My scores will predominately reflect the MSRP, with some added commentary about value-for-money at the prevailing prices, which a reader is more likely to have to pay to lay hands on these.

I had previously encountered the 10-year-old and 12-year-old expressions (as well as the 13-year-old Van Winkle Family Reserve rye) on the shelves of other local bars. Pours weren’t cheap, but they ranged from “very good” to – in the case of the 13-year-old-rye – among the best whiskies I have ever tried. However, I lacked the complete picture.

This evening offered the opportunity to try all the Van Winkle expressions (2018 release) together. The invitation promised a tasting of 5 pours, guided by Preston Van Winkle. (Full disclosure: I paid $100 for a ticket to this event, which included snacks). Doing my best to block out chatter, honky-tonk music, and the aromas of Mexican food in order to form some critical opinions about the whiskies on offer, I was able to generate the following notes:

The first whiskey is the Old Rip Van Winkle 10 Year Old. It is bottled at 107 proof (53.5%) and has an MSRP of $60, though the estimated auction price is around $350 (using results from the most recent HDH spirits sale).

In the mouth: Starts with a bright, slightly bitter burst of tangerine. Barrel char and a metallic note are evident at midpalate. There’s a round ripeness that re-emerges, along with caramelized sugar. This is densely flavorful. Finishes bright and clean, with a wisp of tannic oakiness. Very good bourbon

On the nose: Peppery sweetness to start. More sedate than the 10-year-old, this has caramelized sugar and some green leafy aromas. Hard to find too much to say about this one.

In the mouth: Pale, dilute. More of a soft wheaty character, in line with the Weller bourbons. Lingers a bit, with a gently smoky bitterness. The quietest of the bunch.

On the nose: Vanilla buttercream abounds, though it is gently and smoothly integrated. Savory notes of ham hock and chicken broth. Salted chips (crisps).

In the mouth: Gorgeous, generous ripe orange fruit at midpalate, with a leavening note of candied sweetness. Finishes with a lingering ferric note that tiptoes into the smoky spiciness of grilled chili pepper. The most complete and balanced of the bunch.

On to Pappy 20-Year-Old. It is also bottled at 90.4 proof (45.2%) and has an MSRP of $170. This sells at auction for closer to $2,000. Mark previously had a taste of this back in 2014. An interesting programming note: the vicissitudes of time and fortune mean that this distillate is mostly from the Bernheim distillery, better known to MALT readers as the producer of Evan Williams and Elijah Craig bourbon.

In the mouth: Woody and ashy to start. Faint ripeness of red apples turning brown. Dirt. Cask asserts itself with lots of drily earthy notes. A step down from the 15-year-old.

In the mouth: Starts with a burst of freshly-squeezed lemons. Through the palate and into the finish, there’s a balance of warmly sweet, roasty, smoky and fruity notes. Complex.

The most fun I had with these was when I stopped studying them and started enjoying them, as drams in a glass, to be mingled with conversation and food. Bar the 10 year old and the 15 year old, they don’t bear scrutiny for the MSRP. At auction prices, you’re buying these as collector’s items or as an “investment,” though (as a professional investor) I stand by my assertion that whiskey has all the hallmarks of the world’s worst investment: thinly-traded market, highly subjective valuation, no intermediate cash flows.

So what’s the point of this tasting, or indeed of the existence of Van Winkle bourbons as a going concern? Assuming the 9,400 cases are split 40%/30%/15%/10%/5% between the 10/12/15/20/23 year old expressions, respectively, MSRP would yield Buffalo Trace $10 million of annual revenue. Put differently, the annual sales of Van Winkle bourbons would account for 0.8% of Buffalo Trace’s yearly output of 10 million liters.

As noted in the Weller review, these bourbons lend a halo to the remainder of the Buffalo Trace range. They’re a P.R. activity, a calling card. They’re nice enough, and a couple are decent value for MSRP, not that you or I will ever purchase them for that amount. BUT (big but) they garner a disproportionate amount of attention, and as such are immeasurably valuable to their parent, or its marketing department.

All that to say: with clear eyes and a pure heart, I cannot advise anyone to go out to an auction house and pay the vastly inflated sums these bottles command. Sorry (not sorry).

Oh, I nearly forgot: how did Pappy himself drink his bourbon? In a tall glass with huge ice cubes and a twist of lemon, as he sat on a stool in a cornfield shooting doves with a double-barreled shotgun. Forget auctions, forget hype, forget four-figure profits. If you read this and would like to please Pappy’s ghost: pour yourself a heaping glass of bourbon, served however you may like it, and be happy. 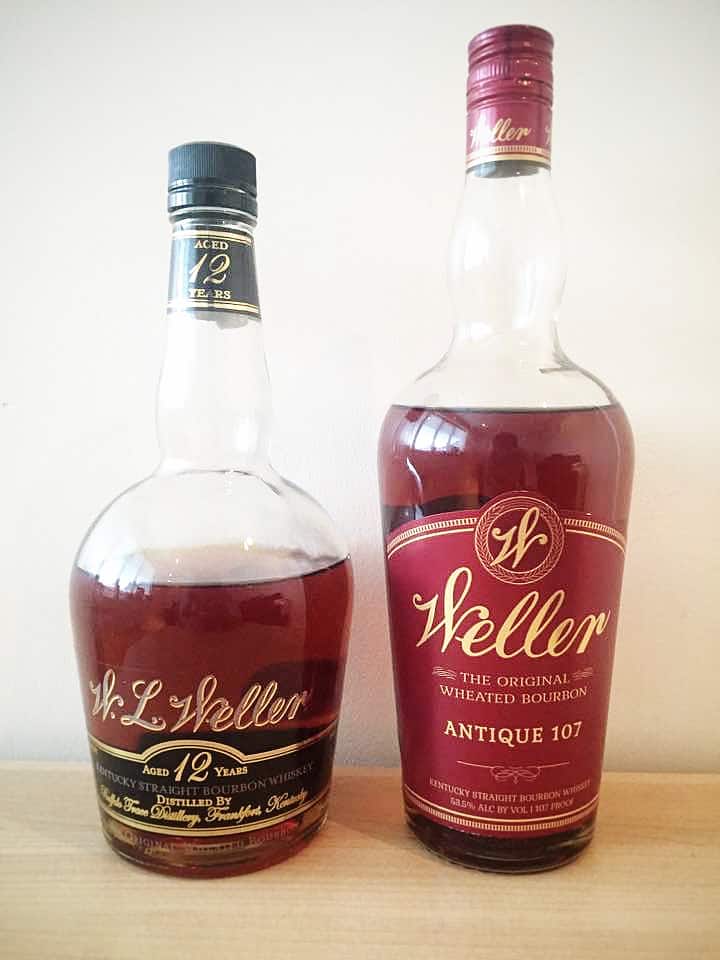