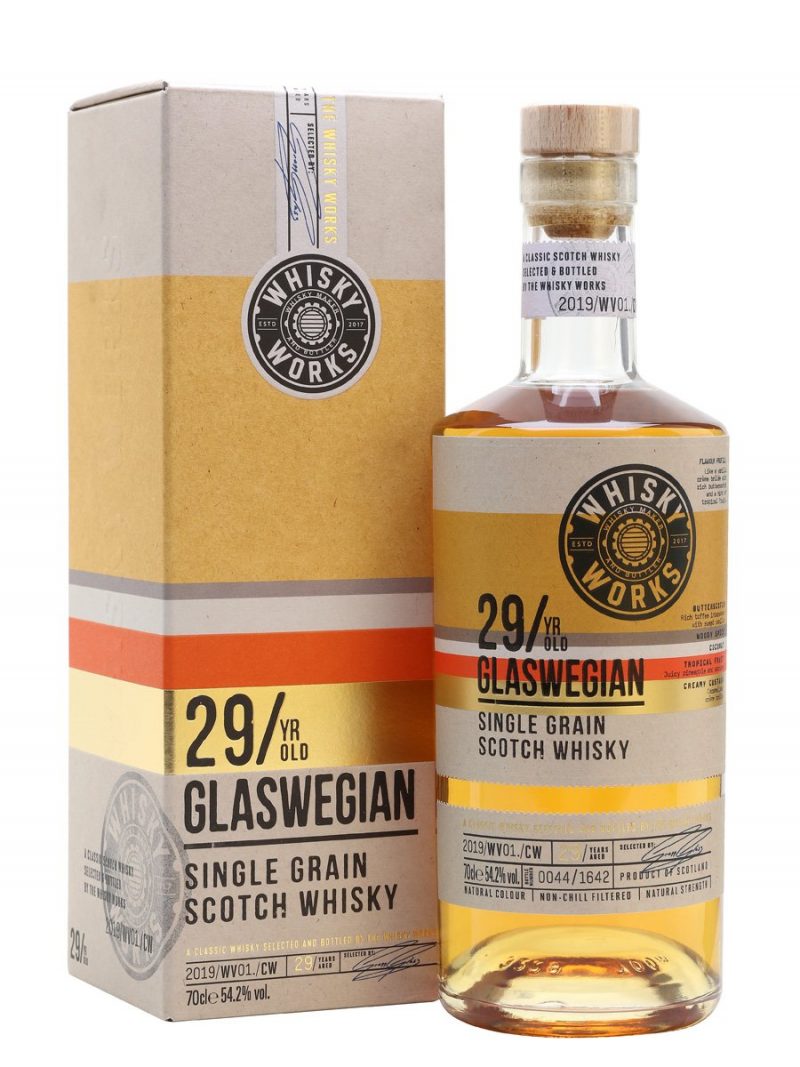 A little while ago, in Taylor’s excellent review of an Invergordon grain whisky, he teased me for having a slightly judgmental approach to single grain whiskies. He made a point of finger-wagging, which is something we approve of around these parts, and said he wanted to judge single grain whiskies on their own terms – not by comparing them to malt whisky.

Which is fine, if you’re the sort of chap that likes awarding medals to kids for achieving 78th place at a school sports event. Fine. And Taylor is American after all, and so such softness, such ‘everyone gets a prize for taking part’ can be forgiven. But you see, I disagree – and we Malt writers are allowed to disagree with each other. Can you imagine if the world let Jason’s opinion be the only one out there, for heaven’s sake?

Let’s get back to this ‘treating grain as differently special’  defence, akin to ‘you wouldn’t review a McDonald’s in the same way you’d review a Michelin star restaurant’; it is not quite appropriate, I don’t think. Not quite. For one, single grain whisky is being sold on the same terms as a single malt, everywhere. The prices of the two grain whiskies I have today are probably comparable, more or less, to a single malt (certainly a Cadenhead’s bottle). And grain whisky is being sold in the same bottles, with the same labels, in the same section of a shop. The only slightly different thing is the word ‘grain’ instead of ‘malt’.

Secondly, rye whiskies are grain whisky, are they not? In that they are not using that holy grail of malted barley. And we give them equal treatment around these parts – we expect them to withstand a comparison. Some rye whiskies are excellent, but to suddenly suggest a Millstone rye (i.e technically a ‘grain’ whisky) can’t be discussed in the same breath as other single grain whiskies, or other malt whiskies, is a curious stance to take. Where does one draw the line? It’s a bit like saying we can’t compare young whiskies to old whiskies because they’re not the same; when I absolutely would compare, say, the Cotswold Distillery’s youngest offerings and enjoy watching them smash some rancid old Scotch that’s been matured in a fourth-fill cask for 20 years out of the park. Because context is everything.

Let’s be brutally honest: single grains, especially those made in industrial column stills in Scotland, are inferior. Let’s just be honest, they simply are. To be judgemental about it is to be honest about the fact. Gushing out of steel towers as neutral alcohol, most flavours ripped out of it during the intense production process, grain whisky historically was designed for the very reason of seeing how far you could stretch the flavour of single malt whisky in order to make the cheapest product possible. And historically, it served its purpose in getting Scotch whisky to be the dominant liquid of the modern era.

Ever since Coffey famously patented his column still in 1831, and three decades later the industrialisation of the, uh, industry that followed Andrew Usher’s developments of blending malt and grain whiskies (to give a cheap blended whisky), grain whisky has been frowned upon as a dubious devil spirit. The major Irish distillers of the day absolutely railed against it, despite parts of Ireland actually adopting the Coffey ‘patent’ stills, because it was cheaper than what they could make themselves. Not to mention flavourless. (Unless, of course, it has spent about three decades in a cask, which it hadn’t.) 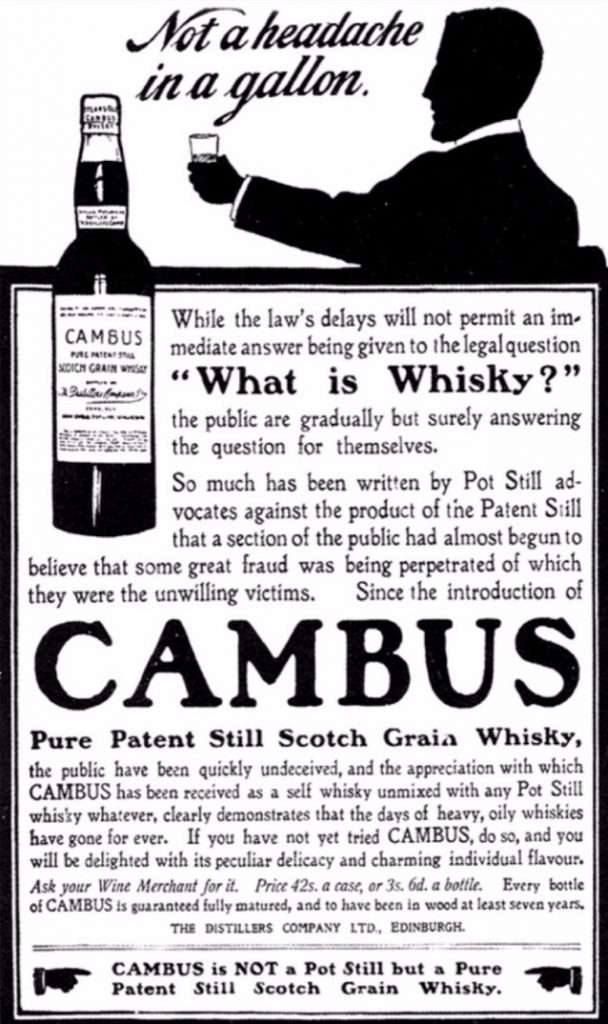 Much of the industry loathed grain whisky, this ‘silent spirit’, and there was a famous court case in the London Borough of Islington in the first years of the 20th century for the very soul of whisky, whereby grain whisky was finally allowed to be called ‘whisky’ at all. Cambus was making propaganda posters in retaliation at the time. (An excellent piece here.)

To the modern day, then. I blame Haig Club for the resurgence of single grain: that other producers now think they can knock a lot of it out alongside bottles of single malts, at getting on for the same cost. A lot of people will buy a bottle because of the branding rather than the flavour to be found within; I don’t include you, the handsome and wise Malt reader, in that particular dramographic.

So given a court case decided a century ago to call grain whisky whisky, and since this review site – correctly being called MALT – reviews whisky, we shall continue with forcing single grain whisky to stand alongside single malt whisky, and indeed every other type of whisky, to be judged partly on its own terms (as is every whisky) but in the context of everything else. No favours. No golf handicaps. No special allowances for 78th place. If you slap your fancy label on the bottle, charge an eyebrow-raising amount of money for it, and slide it in front of me – you can jolly well expect opinions.

The whisky consumer has her trousers pulled around her ankles more often than not these days, so whilst cheaply manufactured spirits, once intended for blending fodder to make flavour from a single malt go further, but now being sold as something more exclusive – and being sold with ever-increasing price tags – we all deserve to know where best to spend our pennies, be it on a malt, a grain or a blend.

That, after all, is surely the point of us mashing the keyboard.

So. Some opinions, then… 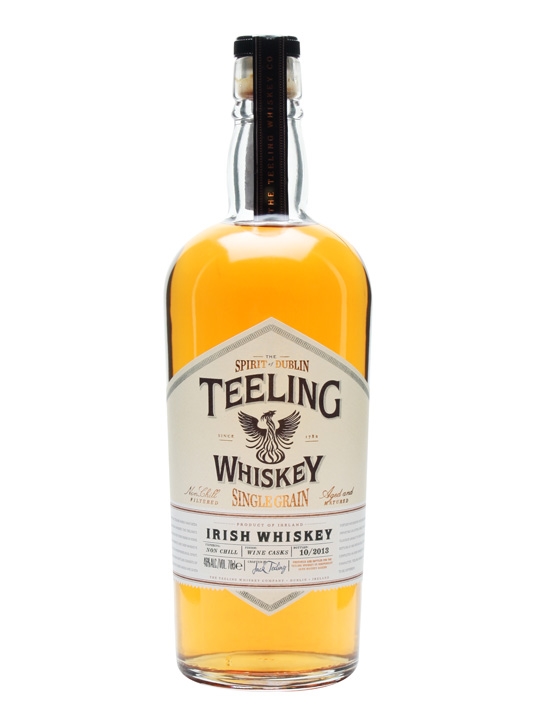 Distilled at Cooley, one presumes, and bottled at 46% ABV.

In the mouth: though it’s simple, it has a nice rounded mouthfeel. Nothing much but your usual vanilla notes at first: baked apples, a little heather honey. Dried apricots. Some sourness, grapefruits perhaps, but not a lot. Olive oil. Peppery on a very short finish.  There’s an unpleasant note somewhere here, a slight bitterness, charcoal-like savouriness that doesn’t belong.

(I feel obliged to remind people that we use the whole of the 1-10 scale, so this isn’t a bad score for the price.)

Bottled at 54.2% ABV, this was distilled at the attractive Glasgow tourist spot of Port Dundas Distillery.

Colour: pale gold (despite 29 years in a barrel).

In the mouth: the intensity, aided by the ABV, is more significant, but is it more flavoursome? (Remember volume isn’t the same as complexity.) Vanilla by the bucket-load, as to be expected. Apricot or quince jelly, more of those biscuity notes. More of that slight sourness, a charred note. Green tea – with Assam on the medium-length finish.

So do these stand up within the context of everything else? The Teeling isn’t too bad for what it is. This is not sophisticated stuff, nor is it complex. The other? three decades in a barrel is just about right to get some decently flavoured single grain whisky, so The Whisky Works is solid enough. But it isn’t worth the £128 asking price, not by a long way. I’d go for the Teeling, at £40, over this; yet I wouldn’t ordinarily opt for either.

I remain unmoved, however, by grain whisky. I don’t think a lot of it should be sold, certainly not for the prices at which they are being sold. Flavour – and why would we be interested in anything else? – is largely absent.

Note i: samples of both whiskies were sent to Malty Towers; images via the Whisky Exchange, for which there are affiliate links that make us bugger all.

Note ii: Taylor probably hates me now, so I await his retaliatory skewering.