This is a cynical refrain that my wife has developed after a series of disappointing follow-up experiences in places that previously moved her soul. That restaurant where she enjoyed a life-changing meal? It’s been taken over by Guy Fieri and is serving reheated piles of dry leftovers. That perfect unspoiled beach with pristine sand and nary a soul for a mile in either direction? It’s called Tulum, and it is now a big pile of seaweed and trash (literal and colloquial). Her favorite college bar? Don’t get her started!

Whisky certainly might fall under the purview of her warning. How many of us have revisited an old favorite expression, only to wonder what we could have been thinking? The input variables are too numerous, their fluctuations too unpredictable. That’s before distilleries, or their corporate owners, start mucking about with fermentation times and cask selection and dilution in order to fatten their profit margins. Every aged whisky drinker has a sad story of a former go-to dram that has, for one or all of the reasons mentioned above, become a shade of its former self.

Like Alice, “I give myself very good advice but I very seldom follow it.” Thus, I couldn’t wait to follow up a good – nay, great – thing with more of the same, or similar. It went poorly. This is my story.

I recently reached the top of the whisky mountain, or at least base camp, with the Blackadder Raw Cask Amrut. It was so good, so eye-opening, that my enthusiasm was palpable throughout the review. This exuberance was returned in the comments and on Twitter, with fans of Amrut from all corners of the globe encouraging me to seek out other expressions.

The suggestions offered by our readers varied, but one consistent thread was that the Intermediate Sherry expression was a must-try. The sense of urgency was high, as this bottling is reported to have been discontinued. Some bottles remained on the shelves of my local liquor chain at relatively fair prices.

I was smitten with this new (to me) distillery and couldn’t wait to have more of their delicious whisky. Ignoring my wife’s advice (about not going back, though also about not purchasing any more whisky), I rushed right out to procure a bottle.

This is Indian single malt whisky, matured in virgin and ex-bourbon casks and transferred to Spanish ex-Oloroso sherry butts for another year. This “intermediate” maturation is followed by further maturation, again in ex-bourbon barrels.

On the nose: This is a sherry cask, all right – almost stereotypically and comically so initially. Straight out of the bottle there are notes of raisins, rubber balloon, and sulfurous nuances of struck match. Richer fruity scents of stewed plums, matcha green tea, and a hint of Bubblicious grape chewing gum emerge. I was cautioned that this takes a long time to open up, so I’ll leave it for a bit and revisit…

OK, back now, a few hours later. This has settled down, with more rich woodiness augmented by some exotically spicy notes. Mukhwas again, as well as cocoa powder and an umami note of soy broth. Still a lingering wisp of sulfur to speak for the sherry cask.

In the mouth: Again, tasted in two parts. Firstly, a hot entry gives way to an oxidative note of sherry at midpalate, with a drying mouthfeel. On the finish, this has some of the roasty, meaty, and spicy notes I admired in the bourbon cask. Unfortunately, on the first go-round this lapses into a lingering chemical flavor of sulfur.

Revisiting this later, I get a more sedate entrance with a tart flavor of lemon juice at midpalate. Enters the back of the mouth with salted cashews. There’s a smoky-savory note of mesquite wood that persists through the finish, which has a reprise of the tart citric note and some lingering chai tea and mocha notes.

Too much of a good thing? I could see where the richer and sweeter nuances of the sherry cask might be an interesting counterpoint to the meatier and spicier notes of the new make, showcased to such excellent effect in the Blackadder bourbon cask. However, this lapses into self-parody, with all the attractions (and some of the flaws) of sherry casks dialed up to 11.

Despite the obvious imbalance, I am hesitant to dock too many points on this one. There’s clearly excellent distillate at the heart of this, and enough of the elemental flavors show through as to not make this a total waste. Still, it requires some refinement. Perhaps more judicious cask selection (though Lord knows what sherry casks make their way to India) and some tweaks to the maturation process might make this better balanced and more palatable?

Or, perhaps I just shouldn’t have gone back?

The Amazon link is commission based but we do encourage you to shop around. 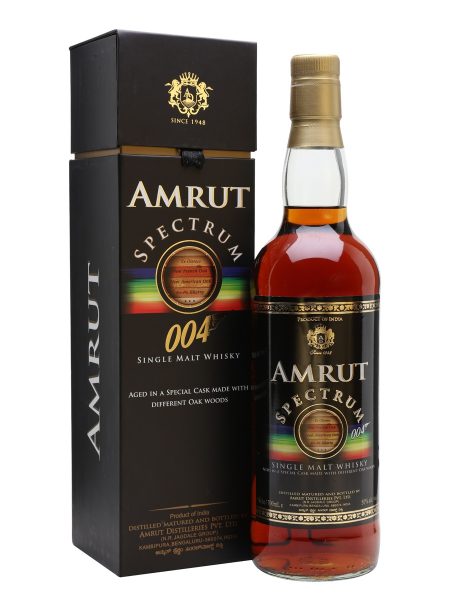