When it rains, it pours. Monsoon season hits today with a dreich Scottish accent.

My initial foray into Amrut produced a gorgeous dram that transported me back to the hectic, overwhelming experience of traveling in India. The effusive praise I lavished on that bourbon cask sent a few others scrambling for bottles of Amrut. Carl was bowled over by the sample I provided him and ran out to snatch up others of the genus. He grabbed a bottle of this peated cask finish and returned the favor by bestowing a massive sample on me.

Around the same time, I hunted down a bottle of the discontinued Intermediate Sherry expression. While some of the appealing points of the Amrut malt showed through, the overlay of funky sherry notes was an unfortunate distraction. In a nutshell, it encompassed the peril of cask finishing.

Cask finishes have emerged as a point of contention among the whisky cognoscenti. A good one can add another dimension to the whisky at hand. A good example of this was the 2017 Talisker Distiller’s Edition, where the creaminess of the Amoroso cask finish provided a sweet and rich nuance that nicely counterbalanced the smokier and saltier characteristics of the underlying malt.

However, things can as easily go the other direction. Frankly, they seem to do so more often than not. This is perhaps due not to an inherent weakness in cask finishing so much as the way in which it is used. If you’ve got a tired old cask of whisky that has sat too long, freshening it up with an exotic cask finish may salvage some profits. Or, perhaps the underlying distillate is so anonymous and bland that slapping on a cask finish is the only way to generate a USP?

Certainly, I wouldn’t expect either to be the case with this Amrut. Blackadder has their choice of casks, and is committed to not mucking about in the presentation of a whisky. The second explanation is also unlikely, given that Indian whisky is already an exotic product and the quality of the distillate from Amrut requires little in the way of augmentation.

I was therefore surprised to learn the particulars of this whisky. It made the journey from India to Scotland for finishing in a cask that previously held peated whisky. Part of what raises my eyebrows is that Amrut itself has a peated expression, albeit with the barley itself having been peated. As with the Intermediate Sherry, I can understand the conceptual appeal. Amrut has a meaty spirit and the addition of a strong counterpoint could produce some appealing flavors, if integrated harmoniously.

With that in mind: let’s have a taste, shall we?

On the nose: Nose of broiled ground beef, campfire-toasted marshmallows, iodine, muddled mint, mukhwas (always), vanilla buttercream, smoked Hungarian paprika, and ground cocoa. Nosed blind, I might have sworn this was Talisker, to give you an idea of the overall profile.

In the mouth: Enters the mouth with a tightly citric and smoky note. Ashy heat and more smoke bloom at midpalate, accented by additional iodine. This lingers with a bit of acrid smokiness, some rich and spicy Mexican chocolate notes, and another salty burst of seawater.

Plenty of flavor, but the peat never really integrates seamlessly. It feels more like an overlay as opposed to an elemental part of the whisky. The smoky notes are a bit stale, more reminiscent of an ashtray than a campfire.

I fear that I’ve done myself a mischief by tasting the unadorned bourbon cask Amrut first. Both the following expressions have, in my opinion, subtracted by attempting to add to an underlying malt that requires no augmentation. The resultant impression feels a bit like grubby fingerprints on a masterpiece.

I’m reminded of an old adage about childrearing: “there’s a small number of ways to get it right and a million ways to screw it up.” The same could be said of cask finishes. When possible, I’d like to encourage distillers and bottlers to resist the temptation to slap on a fresh coat of paint. Take Mother Mary’s advice, and let it be. 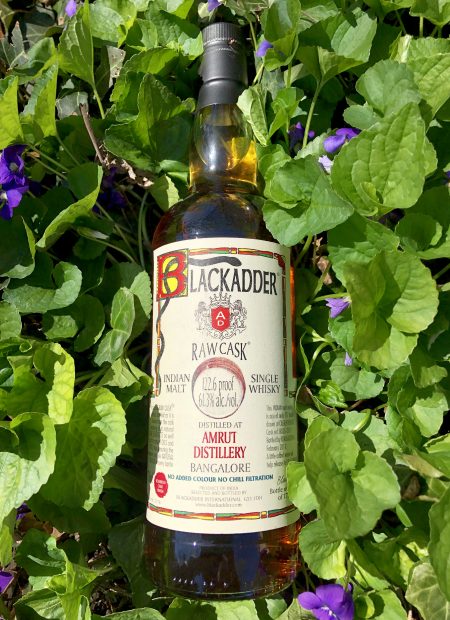