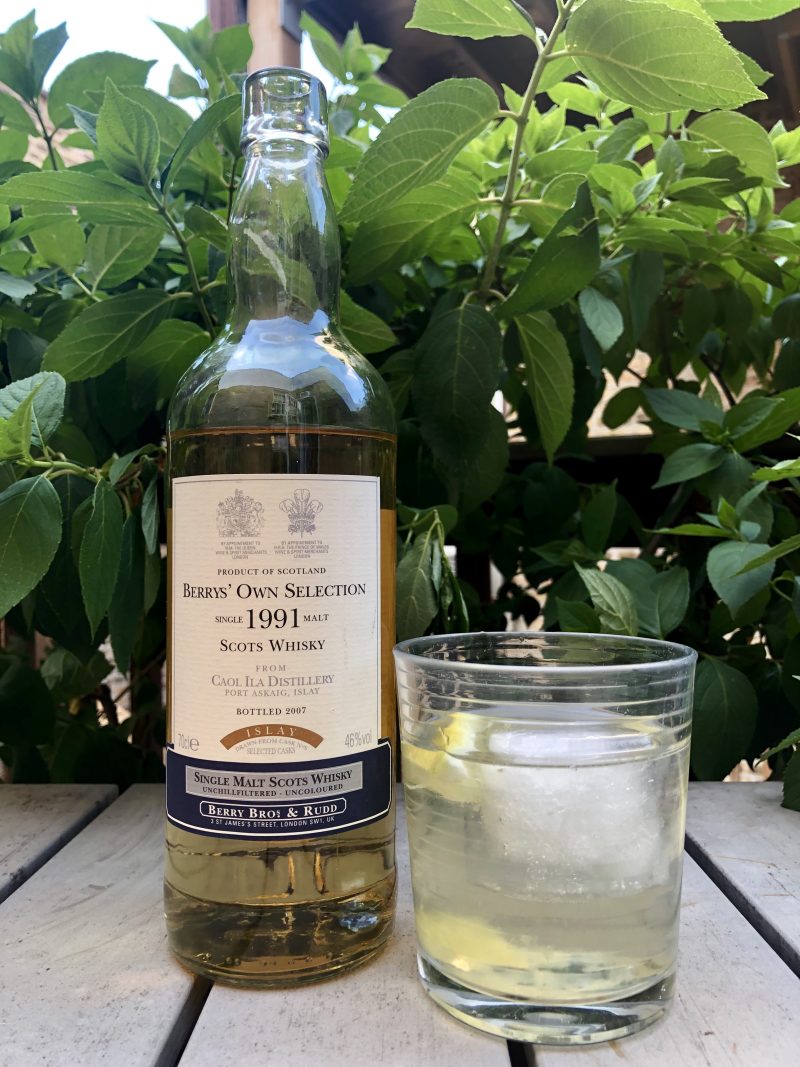 Don’t you know the rules? I’m not talking about the UK law governing the production of Scotch whisky, nor indeed the TTB’s “Federal Standards of Identity for Distilled Spirits” that stipulate what may or may not be called a straight bourbon whiskey.

I mean “The Rules.” The ones that get pointed out to you without solicitation by an imperious stranger at a bar in response to an observed breach of imaginary etiquette. The ones that an enormous red-faced gentleman (always a gentleman) delivers through an estery cloud of halitosis after he’s exceeded his recommended weekly intake in a single evening.

One of my favorite anecdotes in this vein concerns Preston Van Winkle, scion of the Van Winkle family and great-grandson of the legendary Pappy Van Winkle. According to Preston, he awaited the arrival of some friends at a Louisville bar by ordering the family favorite: Pappy Van Winkle’s Family Reserve 15 Year Old in a tall glass of ice with a twist of lemon (this is how Pappy himself used to take his bourbon). Not knowing the identity of his customer, the bartender refused by saying “I could never serve it to you like that. Pappy would roll over in his grave.”

Outside of the self-important and prissy world of fine wine, that audacious and inhospitable attitude is almost unfathomable. Imagine a short-order cook refusing to prepare Eggs Benedict! Yet in the whisky world, we’ve been conditioned to (nearly) accept dogmatic proclamations about the manner of “correct” enjoyment of our individual beverages. The advice comes from every corner, on every aspect of the whisky-drinking experience.

Let’s start with the glass. You might naively and foolishly enjoy drinking whisky from a rocks glass, you benighted little thing. However, an effective marketing effort has convinced the suggestible that a Glencairn glass is the only way to go. Unless it’s not: some other glassware with a stem is preferred by those who know better than those who think they know better. I’m aware that a few of the MALT crew have their favorite tulip-shaped inventions. The implied threat is that anything less than the geometrically ideal and volumetrically perfect container will leave you missing entire dimensions of the whisky at hand.

Water? Open the floodgates of opinion! The first proper instruction I received in whisky tasting (as a young tourist at Edinburgh’s “Scotch Whisky Experience”) included an eye-dropper and a glass of water. I was informed that a “real Scotsman” adds a drop of water; foreigners and those with more fragile constitutions are permitted a deluge of two drops. I assume they found these rules etched on a Pictish stele?

OK, so: no water. Except the Japanese will tell you that water is crucial not only to the production but also to the consumption of whisky. The legendary Masataka Taketsuru, in evaluating potential locations for his second distillery, would mix the local water with Nikka Black in order to gauge its suitability, so elemental was it considered to the whisky experience. Confused now?

How about ice? A friend in the Twitterverse informed me that he would never add ice, given that the 14th- and 15th-century pioneers of Scottish whisky distillation did not add ice. I couldn’t resist pointing out that they also didn’t mature whisky, so a committed originalist approach would necessitate the drinking only of new make, a program for which I doubt there would be many volunteers. Phil chimed in with the observation that he’d need to find whisky distilled with and steeped in garden herbs as well.

Also, as long as we’re talking about tradition, what of the long-standing practice of highball making in balmy Japan? Given that culture’s widely-known and well-respected penchant for ritualized perfectionism (and the historically excellent quality of their whisky), shouldn’t we yield to their custom? Except, self-appointed whisky experts (myself included) frequently talk about dumping the remains of subpar bottles into highballs.

Once you’ve got the stuff in the right glass, having added water (or not) and ice (sure, but also never), how to go about tasting it? The annually published “Bible” includes an 18-step tasting regime, including the chewing of coffee beans and correct hand placement. In fairness to Mr. Hat (and in a style contrasting notably with his absolute proclamations about superlatives), he does clarify that this is just his preferred method and encourages readers to go with what works for them. Others have rules of thumb that include letting the whisky sit in the mouth for a second for each year of maturation, a practice that takes on anesthetic attributes for those of us lucky to sample drams in the 40+ year range.

If you can believe it, despite this lengthy prologue, I have yet to drain the well of malarkey that irrigates this topic. You get the point, however. Everyone has an opinion, and—as in other areas of discourse—the most stentorian voices are frequently the most wrongheaded or least-informed ones.

I’m an inclusive, “big tent”-style pluralist. If you love whisky, you’re a friend of mine. Until an enterprising militarist establishes a whisky dictatorship, we’re all free to open our bottles and consume them as we please. While I’ll continue to savor neat drams from my Glencairn (yes, I’m one of those) for the purposes of serious evaluation, I am also willing to diverge from that method as circumstances demand.

With summer setting in, I’ve seen numerous online comments of late to the effect of “I want to drink whisky tonight, but it’s just too hot outside.” As temperatures here in Chicago climb into the 90-degree-Fahrenheit range, I’ll admit that I’ve found myself hesitant to pour a straight dram. This is particularly the case for peatier expressions, whose smoky accents are more consonant with winter nights sat warming my feet by the fire.

Yet I have a long-unopened bottle of Caol Ila eyeing me accusatorily from the home bar shelf. In a move sure to outrage the purists, I am going to taste it (firstly) as part of highball, then return later to the dram in its unadorned state.

A word on methodology: I am using Chicago’s finest tap water, carbonated to medium effervescence in a SodaStream. The water is drawn from Lake Michigan, noted for its “hard” quality of high mineral content, and filtered (mostly through carbon) in our local purification facilities. The ice is a single two-inch cube, freshly produced from a silicon tray in my freezer. Two ounces of whisky have met four ounces of water and a gently-squeezed wedge of lemon and have been stirred gently.

On the nose: Appealing intermingling of meaty and smoky whisky, accented by the citric sweetness of the lemon and a hint of the water’s minerality. There’s also the watery vegetable note of cucumber. It almost begs for an immediate sip. While more discrete individual aromatic nuances have been smoothed over, this gains a completeness by virtue of the combined ingredients.

In the mouth: Starts with a dry ashiness, despite the dilution. At midpalate, there’s a gentle bloom of some dried floral notes of potpourri, accented by a subtle smokiness. The effervescence perks this up at the tip of the tongue, where the flavors crescendo with a gentle sourness and a stern stoniness. The lingering effect is also very mineralic; not clear whether this is from the whisky, the water, or both. There’s a re-emergent note of savoury smokiness and plump malt that occurs at the back of the throat after some time.

This is a great aperitif, refreshing and crisp but roundly flavorful. The water and lemon draw out, but also interact with and complement, some of the essential aspects of the underlying whisky. It’s perfectly delicious and well-balanced on a tripod of smoky malt, fruity citric tartness, and the water’s mineral notes.

What fun this is: a refreshing whisky beverage made by me, to my own specifications. I feel free! You simply must try it immediately!

I almost left it here, without a staid and orthodox review, but couldn’t countenance having to respond to the furious onslaught of comments. Now that I have the zealots frothing at the mouth in a feverish rage (a nice cool highball could help with that, incidentally), it’s back to basics.

This is a bottle of Berry’s Own Selection “Scots Whisky” from the Caol Ila distillery. It was distilled in 1991 and bottled in 2007, making this 15 or 16 years old. It is “unchillfiltered” and “uncoloured,” per the label, which also confusingly indicates that this is “Drawn From Cask No.s Selected Casks.” It is bottled at 46%; I paid around £100 for this at the St. James’s Berry Bros. shop back in 2016.

On the nose: Ample creamy vanilla notes to start; an ex-bourbon cask or some Amontillado sherry casks, perhaps? This has a vegetal note of celery, some caramelized sugar, a surprising tart hint of raspberry, as well as the faintest spicy note of cumin.

In the mouth: Faint and mute to start. There’s a creamy wave that transitions abruptly into a stale ashiness and a woody astringency in the midpalate. All of the sudden this feels very weak and watery at the top of the tongue. It lingers with more acrid smoke. An ephemeral savory note of beef broth emerges before this lapses into another different astringent, tannic note of extracted wood.

Far from the best example of Caol Ila, this is rough-edged and bitter at points, despite being older than a number of better-executed expressions from this distillery. Though no cask information is available, the generally high quality of Caol Ila distillate would finger maturation as the source of the off notes. At this price, there are manifold superior options from independent bottlers available for purchase.

Well, well, well, what have we here? A whisky that is obviously flawed and slightly unpleasant on its own, yet forms the backbone of a perfectly pleasing concoction. Tasting this on its own, I almost couldn’t believe this was so off-kilter; the highball seems to have accentuated all of the positives and effaced all of the negatives.

For those fundamentalists who are still clutching their pearls, I’ll quote a bitter enemy by saying: “R-E-L-A-X.” To all the others: hopefully this has served as a shove in the right direction. Liberate yourself from imposed strictures, open your mind and your mouth, and enjoy whisky in your own way, in any way, in every way. If you don’t, you’re drinking whisky wrong.