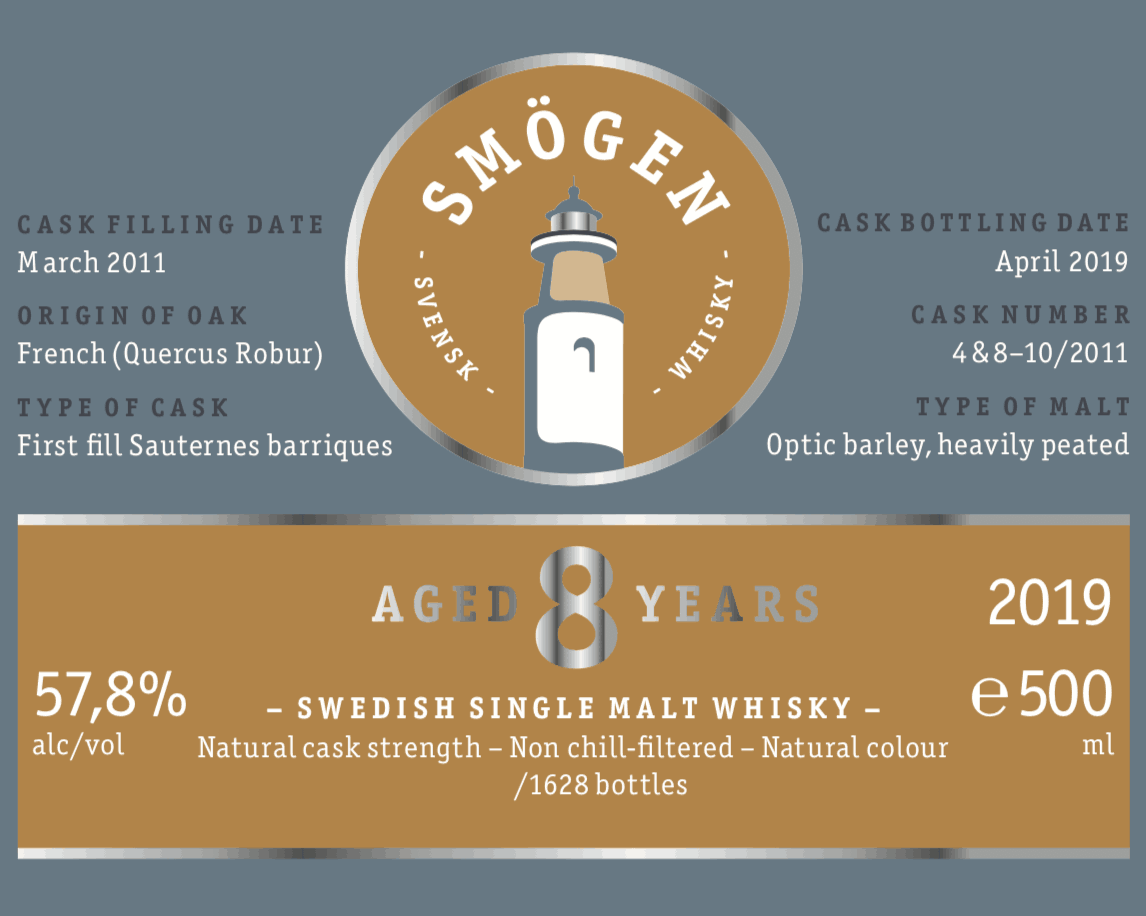 Look, you know this is going to be good all right. If you have read any of my recent Smögen reviews on Malt then you’ll know it’s probably in my top 5 favourite distilleries – possibly even top 3, and the Number 1 spot is reserved for Waterford, naturally.

Recently Serge at Whiskyfun suggested that this distillery could be Europe’s answer to Chichibu, and I think he’s onto something. Perhaps not in terms of volume, but in the sheer quality of spirit, depth of flavours, variety on offer, then yes. There isn’t quite as much experimentation I suppose, but these are niggles. What we have is a good, small-scale producer, making whisky in the best possible way, as I have covered numerous times before. (The first of which was a worrying five years ago – doesn’t time fly?)

The basic checklist for good whisky – and it’s a shorthand hack – goes something like:

If a distillery shows me its hand and those four points are pretty well covered, then I think they’re onto something. There’s more to it than that, of course, but we live in the age of McContent and skimming through thousands of photos of unopened Instawhiskies, so none of us has much time, right? Anyway, with regards to that checklist, as I have pointed out elsewhere, Smögen excels. Fermentations in excess of 6 days, really good first-fill wood, and you don’t need to have whiskies that are ten, twenty years old.

But I suppose there’s a grander point I want to make: other than the fact that Smögen, I know, is technically making good whisky. What does a distillery have to do for me to declare it a favourite?

I have been involved in many a whisky judging moment: various international competitions. These are never perfect affairs: hasty, selective (not to mention dependent upon who paid to enter); plus we are in a world where everyone gets a medal for taking part. I am also, in these circumstances, left bemused at what gets declared to be “the best”, because so often it’s a complete nonsense, a culmination of often pollution-covered London-centric tastebuds (I am not for a moment suggesting those more accustomed to the pies of the North of the UK would select better whiskies, but I do like to make a sweeping generalisation when I can).

Every brand likes to stake their claim to be the most superior, but when you know anything about the production of whisky you can see right through these “hand-selected” and “master blended” claims. Everyone says they’re the best. But what really is the best in my judgement? Consistency perhaps? A lack of being let down? What a metric, eh? “You aren’t a complete letdown.” No, it’s not consistency, although this distillery has that in terms of regularly good quality.

Excitement? Yes, I think that might be something to do with it. I look forward to what comes next. I am genuinely excited to trickle this stuff across my tastebuds because it’s slightly different each time. It’s not because it’s small batch, because small does not mean great (Kilchoman and Daftmill being examples of that).

My only niggle about Smögen, however, is that we live in a brand-heavy age and that they don’t have much of a presence. A personality. I would like to know far more about what goes on, how the whisky is being made, the location, the people (person) involved. I would like to know what else goes into making the distillery what it is. I want to know how it thinks.

Because that’s all that’s lacking from making it my actual favourite now: there’s a distinct lack of emotional connection. It’s all right having technical brilliance, and jolly good flavours, but if there’s no emotion involved then I can’t quite wholly love it.  A Facebook page with some bottle and barrel pictures might just keep things ticking along, but I don’t get a sense of philosophy, of its raison d’être. This may be the challenge with small companies: in that they can’t have the (wo)manpower to really connect with people.

Just what does Smögen believe?  It is possibly lost in translation, and that relegates my love to being something from a distance: a crush, perhaps. I am a (not-so) secret admirer. You can pick this up from Master of Malt at the time of writing for £101.95 for a 50cl bottle.

Anyway, less of my meanderings.

Colour: russet – with the touch of peachy pink in there.

On the nose: hints of Springbank and Longrow; that uniquely industrial, slightly metallic smoke. Drifts right into sandalwood, woody spices, amber, honeysuckle (Sauternes influence?) – so perfumed you could wear it. A delicious red berry sweetness starts to rise up. Maple syrup. Baked apples. Cinnamon. The sweeter notes – muscavado sugar, lemon curd in places – balance out that Campbeltownian stuff at the start perfectly.

In the mouth: that spirit is so well made; it has such a thick texture, clings to the glass – and mouth. The peat is a little stronger than on the nose, but again wrapped up in that dense quality you’d half-expect in a robust Longrow (honestly – get someone to blind taste this). Except it’s better than Springbank – it’s hugely cloying, chock-full of fresh wood goodness. Apricot jam. Stem ginger. Heather honey spread across wholemeal toast. Lighter touches: sultanas, even citrus notes. Chilli flakes. Nutmeg on the hugely warming finish. But the balance, the depth, oh my…

This hits my most perverted trigger points. Intense flavour; and the peat – for Smogen – takes a back seat slightly, or is starting to mellow with age, allowing the nuances of the brilliantly made spirit – because yes folks, that’s what it’s actually about, would you believe it! – to shine through. Jesus wept, I love this whisky.

There is a commission link in this review if you so wish to make a purchase – this never influences our opinion.