For many of us, ginger beer exists as a relaxing non-alcoholic beverage, or a mixer for fairly bland whiskies such as the Glenfiddich 12-year-old. A ginger beer is a good host for many a tepid whisky and works wonders, becoming my summer drink of choice. Unfortunately, the 2019 edition of summer in Scotland has failed to arrive. Rain has swept the country on numerous occasions.

Unbeknownst to many, ginger beer does have roots in the whisky industry. Sadly, not today’s gleaming Scotch Whisky Association (SWA) showboating corporate propelled entity, but another era.
There is much debate within Scotch about the rules and regulations around cask types and usage. This prompted Diageo, which controls 40% of the Scotch whisky industry, to form a task force to challenge these rules, including those regarding tequila casks. Diageo has a history of attempting to influence any rules to its benefit, as articles on Marketscreener and Equities outline. Arguably, these changes are not for your tangible benefit as a whisky drinker, but to enable a definition that suits the corporate giant. Diageo also has strong representation amongst the SWA Council Members, who collectively set the ‘overall policy’ of the SWA.

Regulars will know that Diageo traded the Bushmills distillery for the Don Julio tequila in 2014, in which it already owned a stake of 50%. Tequila is a growing market, but so is Irish whiskey, which left many onlookers perplexed. Even the addition of $408 million heading Diageo’s way still prompted debate over the whole deal. But perhaps we now have a part of the jigsaw falling into place, as with access to an abundance of tequila casks, Diageo had to look for a new outlet for these, rather than your local garden centre. The final destination now seems to be the Scotch whisky industry.

Oddly, as part of the new set of regulations, cider casks weren’t included alongside gin casks. The question to ponder is: if the leading members of the SWA had sizeable stakes in gin and cider, would this have influenced these new regulations? Ginger beer also remains out of scope, potentially for the same reasons. However, as suggested, ginger beer does have roots in Scotch. This was underlined to MALT recently when talking to an independent bottler that had studied old ledgers from blending firms. Casks of all persuasions were used to host maturing stock and a regular listing on the inventory was ginger beer casks.

All of this brings us to today’s release from the Australian Starward distillery, which is out with the strong arm of the SWA. Funnily enough, the distillery, which is located in Port Melbourne, received a large investment from Diageo in 2014. This followed hot on the heels of Diageo investing in the Stauning Whisky distillery in Denmark and is a tactic we’ve seen in recent times with, for example, William Grant & Sons purchasing Tuthilltown Spirits in New York. Armed with this influx of cash and access to knowledge—dubbed ‘mentoring’—Starward revealed plans to double its capacity in 2016 via a new distillery site.

Whilst I’d like to talk about the craft of Starward, like the Westland distillery in America, they have decided to take advantage of their corporate investors to push their product into new territories. I can totally appreciate the benefits of this decision and the motivations behind it, but it is always worth highlighting the ownership and influence with a distillery. I’d like to see more of this in Scotland, where we’ve seen an influx of distilleries across the landscape, and also in Ireland. Who truly owns these distilleries? I bet it isn’t the person that is often on camera or pushed out to give a statement.

Meanwhile, we’re dealing with this experimental bottling from Starward, which forms part of its Projects series. The ginger beer casks come from the Boatrocker brewery that produces by all accounts, a fiery ginger beer. These casks are used to finish the Starward whisky for 12 months in an ex-Apera barrel that once held the ginger beer.

This release is available from the Whisky Exchange for £94.95 and it was available via Master of Malt before selling out. Do remember this release is a 50cl bottle, which results in a 70cl price of £132.93; a big price for a bit of craft via Diageo mentoring.

This bottle was purchased using funds from our Patreon supporters who cover our hosting and technical costs. In addition, a wee staff thank you and the occasional bottle purchase to expand our coverage. Thank you.

As with each of our Patreon purchases, we like to dish out samples to various members of the team for a trio of tasting notes. Joining me this month are Mark and Phil.

On the nose: unsurprisingly ginger, then Frankincense and brown sugar. It’s a real sweetie with honeycomb and almonds following caramel and washed red carrots. A metallic tint, those Love Hearts sweets, black peppercorns and all-spice. Careful with the water as just a splash brings out a more fiery ginger with peaches.

In the mouth: more ginger, clammy and memories of Lucozade. A bite of alcohol suggesting a youthful nature. Red liquorice, almonds, orange peel, effervescent and quite tart. There’s lemon on the finish and water reveals more fiery ginger.

An experimental release, so there is a roll of the dice in effect. The final outcome is muddled and a whisky that fails to develop and seems stuck in gear. The Starward is a talking piece. I’d like to see a ginger beer cask hosting a powerful peated spirit and seeing where that takes us.

I’m left thinking that there is potential here in the right circumstances, sadly this isn’t the definitive expression. Nor can I recommend it at the retail price to anyone unless you’re really, really, interested in exploring the outer limits.

On the nose: light, beery and boring, but then it opens to a more bizarre place: grassy and lemon notes, pineapple, lychees. Ginger and lots of sticky syrup. Nail varnish remover. Apricot jam. Cinnamon. Tropical fruits.

In the mouth: tropical fruits, fizzy sweets, parmaviolets. Lucozade. Cherries, the cheap kind you stick in children’s desserts. A bass note of slightly industrial smoke coming through. Warmth from the stem ginger, nutmeg. Creme brulee. Lemon juice and grapefruit acidity. It isn’t that this is not balanced, but rather that it is not harmonious.

It’s very poor but these days such things are filed under ‘innovation’. That said, this just isn’t cricket. Stick it in a cocktail and it might be fun, but it isn’t for serious appreciation.

On the nose: orangeade, vanilla cream, ginger nut biscuits and stem ginger syrup. Banoffee pie and all spice. There’s a herbal undertone with lemon & lime zest. Underneath all this is a light sherried nuttiness with a raisin aspect too.

In the mouth: really not as sweet as the nose would suggest, slightly sour truth be told – herbal bitters, ginger root and dried chill flakes, orange oil and bitter dark chocolate. The finish is campari like –herbal and slightly tart but with a lingering ginger heat.

This one has been difficult to score for me, I’ve flitted between two scores for a while now before finally settling on one. An interesting experiment but one that ultimately isn’t for me. Again, like quite a few whiskies I’ve had recently the nose was pretty interesting and inviting only to be let down by a palate that didn’t match up. The palate is very much driven by the ginger beer cask and while not unpleasant it’s just a very limited flavour profile that never really seems to take off. Again I’m left facing a whisky that I just wouldn’t be in a hurry to return too especially at the price – £85 or thereabouts does seem a little too pricey for this and at that price point there are a multitude of better options. Saying that, now that I’ve been introduced to what Starward are doing; I’m keen to explore a bit more of their range.

Lead image provided by the Whisky Exchange and there are commission links within this article. We highlight this because you value our transparency and honesty. 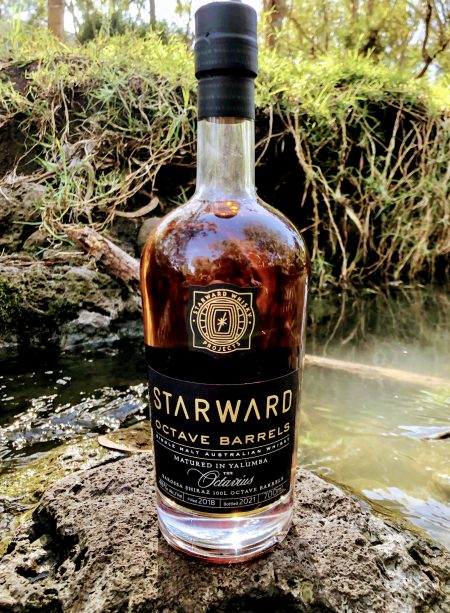