There’s a running gag backstage on MALT to which I’m the only person privy until now. It’s all about Sonoma Distilling Company. In effect, we have three reviews of their whiskies that, for one reason or another, have been frozen in stasis.

The core bourbon expression has been waiting on the green light from both contributors to be rolled out; it’s so old that it features now-defunct packaging from the distillery. Then we have the black truffle release that is good to go, except that I decided to ask some questions around the concept from the Sonoma distillery team.

Who will be first to be published? Only time will tell, but at least Sonoma will have some coverage here that has been lacking, sadly, until now. Note the Sonoma Black Truffle review has already made it online and claimed the prize.

Why the need? Well, it is clear to me that Sonoma knows what it is doing, has created tasty products that don’t cost the earth, and are widely distributed. These are things to be applauded, and generally I find many bourbons, or borebuns — certainly those of the mainstream—to be of the same ilk, and rather mundane. By making your product available internationally and not charging “an arm and a leg,” you are in a way pitched against such offerings. Without the big marketing budgets, you’re left to either compete solely on price—not an option for a small distillery such as Sonoma—or rely on word of mouth with articles such as this as being the catalyst.

Sonoma, I’d argue, has stepped into this more visible and corporate world with their rebranding in 2018. Part of the appeal for their core bourbon initially (which we’ll review one day!) is the sheer amount of information on the reverse label. When I showed my co-editor the bottle a couple of years ago now, he fired it onto his Waterford chums as an example of showing true transparency of the ingredients and process. Will this have inspired Waterford when it comes to their debut whisky? Watch this space, folks.

Therefore, this new visual look and approach is a little disappointing for an enthusiast such as myself. It has a more corporate and airbrushed look. That godawful California bridge has been removed, but as a bridge-loving junkie, I miss its presence. The Golden Gate bridge immediately caught your attention and symbolised the whiskey’s site of origin. In its place now we have a label that is somewhat cold, sterile, soulless, and lacks a regional identity; a misstep, in my opinion.

The new style has the bottle number and lot details, plus the grain component (67% corn from California and the Midwest, 20% Californian rye, and 13% cherrywood-smoked malted barley) and little else. The back label that was once a nirvana of information has been reduced to a mere standard governmental consumption warning and the location of the Sonoma distillery. A bitter change to swallow and, in my opinion, when the industry should be moving towards more transparency, traceability and terroir, a massive backwards step.

You could perhaps argue that the official website should play host to such information going forward. The space on a label is not infinite and is always wrapped in regulations and restrictions. The virtual site could be a resource for enthusiasts who wish to discover the nuances of each bottling. Unfortunately, visiting the official Sonoma website only yields a small amount of detail: this release is aged for a minimum of 15 months, with the majority of blends above two years. Also, that the smoked cherrywood barley comes from Wyoming, and that, ladies and gentlemen, is your lot.

I’m partial to a fancy label, but I’m not swayed like so many Macallan or Bruichladdich fans. The contents must always step up and deliver as well. If this cherrywood-smoked bourbon is a knockout experience, then they could bottle it in a plain bottle with a handwritten label and throw it into a soiled brown paper bag for all I care. The liquid is key and will always be. However, do present the level of information that you have previously on earlier releases.

This bourbon whiskey is bottled at 47.8% strength or 95.6 proof depending on your preference. It is available from the Whisky Exchange for a reasonable £49.25, or a slightly more via Master of Malt coming in at £54.85. My own bottle was a generous gift from the visiting @fromwhereidram who brought it over to showcase her local distillery.

On the nose: exactly what it says on the chin with cherries and a touch of smoke. Rubbed brass, raw cauliflower, red liquorice and a rusty nail. A well flat Irn Bru, cinnamon bark, burnt orange peel and a fruit tea sprinkled with nutmeg. Water showcases more of a wood nature and vanilla.

Very much third time lucky for Sonoma. This release delivers hitting the spot. For its relative youthful age, the cherrywood whiskey is promising stuff and offers more than your traditional bourbons.

One that you can pour and enjoy without too much effort whatsoever. The nose is a particular highlight and whilst I am torn about whether to deduct a point for the rebranding and poor cork – that snapped when I tried to remove it – the whiskey saves the day. 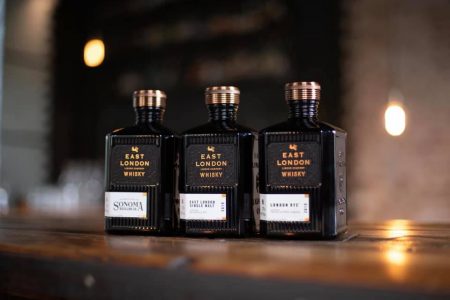