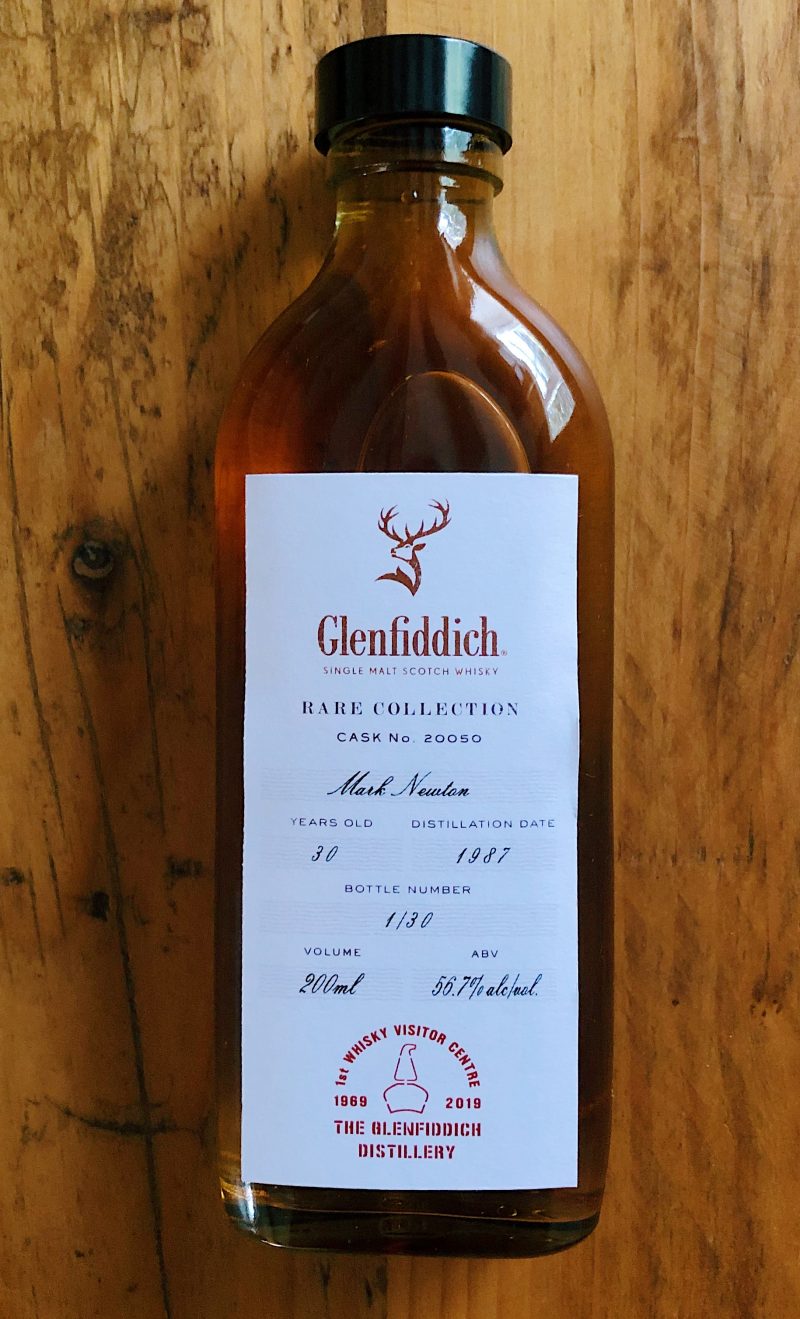 Before some clever badger points it out, yes, this was a sample, a gift sent to me, an easily corruptable so and so; just give me a snifter of what you’ve got and you’ll get 11/10. Happy days.

Naturally, I exaggerate. A bit. But I do make a point in that there is no neutrality out there. We all claim to be – even Jason, with his deep love for Jura, has been hosted somewhere, invited somewhere, treated very nicely by somewhere’s people; it all leaves a pleasant feeling, a little belly rub of joy, a sense that someone-out-there-loves-me. Which will – whether we like it or not – alter one’s perceptions of a dram. You’d have to have the emotional intelligence of a search engine query to think otherwise.

The internet is littered with it. We live in a nuclear wasteland of bias. And I don’t have a problem with that.

Now I know some bastions of independence – those who shout I ALWAYS BUY MY OWN WHISKY, SUCKERS – will claim each and every one of those statements is of virginal purity. But they’re almost always idiots. Because their journey through whisky will have been shaped by experiences, and experiences shape our opinions and feelings of certain brands. So even if people don’t accept samples, even if they do buy everything themselves, they’ve visited somewhere, had a pleasant experience, found the bottle or logo aesthetically matched to their preferences; sometimes they may have even released a partnership bottling with a distillery.

Which is my way of easing myself into this sizeable freebie of a 30-year-old dram. Now, I’ve been rather lucky to taste a lot of old whiskies, and the oldest stuff I have never bought myself. I couldn’t afford to, for one thing; and nor would I want to, because I have consumed so much whisky now that it’s fair to say old whisky isn’t any better. It’s just, well… older isn’t it? I have long lamented the fact that the stuff produced in the 80s, when the industry was in the doldrums – when single malts were the preserve of the most isolated beardy men – was never going to be the best-produced spirit. Cheap grain, rushed through production, and put into shit casks was, by and large, the order of the day (compared to the Really Old Stuff produced way before that). And this is why I am delighted by the wave of distilleries who are preferably following their own flavour-seeking rules.

So old whiskies don’t = good in my book. Yet, here we are, with an old freebie worth a few bob. Does that change my perception of Glenfiddich, whose 30 Years Old Rare Collection Cask I have with me today? Possibly. I’ve been sent a lot by Glenfiddich before, visited the distillery a couple of times, know some of the guys who work there. Does that not shape my opinion already? Probably. My biases come before that.

I think I reflect on all this as part of my personal journey is reaching something of a crescendo: as Head of Communications for possibly (definitely) the most exciting whisky brand to come our way, I have access to what I consider some of the best spirits out there. On tap. But I am now the chap who is, among others, on the other side: I will be sending some bits and pieces out to people, sharing what I think is exciting.

So I am asking myself: am I trying to persuade others to think good of something, to court favourable phrases in return? I would like to think at this stage at least I am trying to engage intellectually with curious drinkers. To have a conversation. This is different because the relationship between distillery and reviewer is almost always never direct these days: I (professionally) am one of the exceptions, but usually, there is a marketing agency acting as a halfway house. The relationship is disconnected. It is marketing-based, PR-based, and not me and someone else saying: so what do you think about this then? What are your feelings?

I’m not necessarily sure where I’m going with any of this, except to say that I have no belief that people are martyrs for not accepting samples, and people are no better or worse for enjoying the odd freebie. (People are absolute arseholes for thinking they are better for some puritanical reason of their own making, however.) The little under the counter tasting at a festival, the special gift in the post, these are the things that contribute to a vibrant whisky culture. It keeps us excited. We’re all eager to enjoy something special, after all. So when I say this is a £1,600 whisky, and it’s a 200ml sample, I’m not dick-waving, I’m just being honest and transparent about it all. You should know me by now – and the general rules of Malt, that we let you know when something has come our way, and even when there are affiliate links.

People who write books, people who write magazines, and people who run websites, that’s all that can be asked of you. No one will think any worse of you for being open about the fact. Indeed, no one will actually care when you spell it out: but they will care when they find you out for not having done so.

Anyway, this particular old Glenfiddich is a limited release of 200 bottles to mark 50 years of the Glenfiddich Distillery Visitor Centre, which is a rather lovely place to visit. 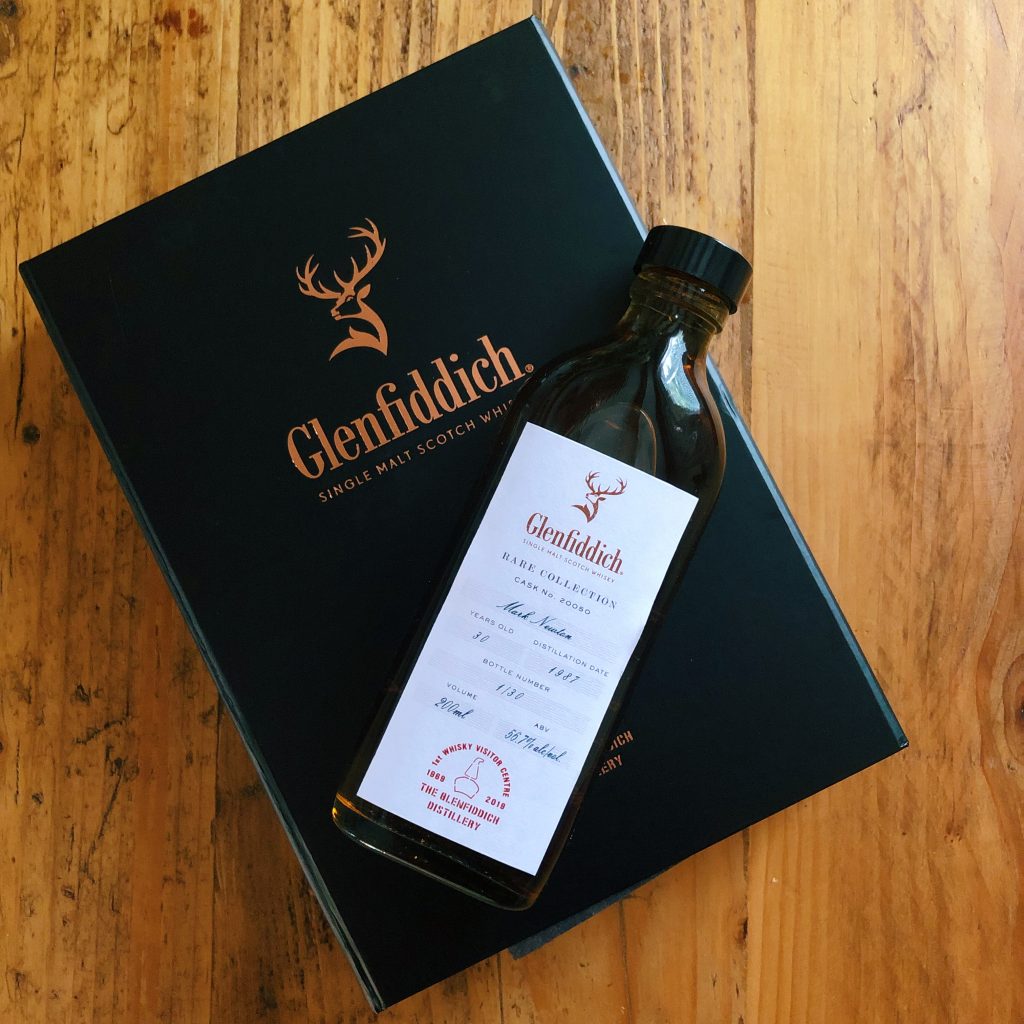 On the nose: most intriguing. Herbal: a hit of fennel from the off, mint, coal dust – it’s very old world – then apple juice. Camphor, tobacco – stem ginger, heather honey. Mushrooms, fragrant and earthy (black truffles too?). With time the earthiness gives way to stacks of raisins, dried fruits, just a hint of balsamic vinegar at the back. Apple piece. Not at all too woody.

In the mouth: good lord that’s lovely. There is a heavy, dense, oily quality to the spirit that isn’t there in latter-day Glenfiddichs. Campbeltown-esque industrial note: a hefty, coal-like, slightly metallic quality that’s balanced by the sweetness of raisins and figs. A hint of earthiness – mushrooms again – but then cranberries, even blackberry jam. Again, not at all too woody for 30 years in the cask.

Scores must take into account price, which is as expected off the scale for something of this age, which is perhaps where our system falls apart a little. Value becomes more abstract if you’re shopping in this price bracket – you’re probably doing well for yourself. Yet there is still a lot of rubbish in this price bracket, but here we have something very old fashioned, the kind of thing that reminds me of the Good Old Days of drinking. I haven’t enjoyed a Scotch whisky as much as this in a long time.

Speyside along with the Isle of Jura is a hotbed of whisky distilleries and when visiting this area of Dufftown in Scotland, one name stands..

Faced once again with a Glenfiddich introduction. It’s not that I don’t like Glenfiddich as a brand – far from it in fact – but I..