Yeah, ok, it’s an Aultmore, but please stay with me and read on; I promise it’ll be worth it for a change.

In a nutshell, this is the issue with Aultmore. It exists and has benefited from the single malt boom with a range exclusively of its own making. Bacardi have thrown huge sums of money at various distilleries within their portfolio, to relatively little success. Do you remember the fanfare? The lavish designs and brand ambassadors trying to win us over. The love that we were meant to feel for the distillery and the rest of the Last Great Malts series that included Aberfeldy, Craigellachie and Deveron?

Frankly, it hasn’t happened now has it? Being the reasonable person that I am, the whisky is ok, if a little overpriced. In reality, it should be better presented with a higher strength and revisiting those price points. With so much variety and choice nowadays, consumers will tend to head towards something they either trust, or is seemingly perceived as value. Neither of these elements feature within the planning of the Last Great Malts series.

We all make mistakes in life and anyone that tells you they otherwise is lying and likely works for Macallan. I applaud Bacardi for the effort to bring a little of the spotlight to these distilleries, however, let’s face facts – the public really don’t care. Along with the 2 aforementioned factors they are creatures of habit. This applies to what they aspire to be seen drinking or lingering around. Aultmore, Royal Brackla and their ilk just don’t cut the mustard when it comes to something to aspire to. In reality, this is something that distilleries across Scotland are in the process of finding out. A few out there have ideas above their station and fantasies of grandeur. They’ve all jumped on the limited and premium bandwagon in the hope of hitting that gold rush. Even Glen Moray – one of Mark’s favourite distilleries – attempted such a feat with the Mastery. With a price tag of £800 for a bottle from a distillery that sits proudly in the value end of the supermarket.

The premium thing as Mortlach and Longmorn showed, may seem a great concept in the boardroom and marketing meetings. Transferring that into the real world isn’t simply achieved with a release, or a high price tag. The public need to desire and sweat a little about a pending release. Hang around a whisky shop for an hour and ask the punters which distilleries would they aspire to purchase a new release from (regardless of price) and I bet you my open bottle of Jura Journey, they won’t mention Aultmore, Glen Moray etc.

To reach that status takes time. New distilleries dropping releases for 3 figure sums and 50cl bottles need to be sent home to think again. You have to put the effort and graft into it. Take our Irish soil chums at Waterford. They could launch some bespoke farm whisky encased in farmer Ted’s soiled wellington boot, which in turn is wrapped in a hand polished piece of French oak – but would it sell as a premium product? No, because a new brand or a distillery in this case, needs to work to reach the summit.

Back to the Last Great Malts range and specifically Craigellachie, where in 2018, Bacardi announced a 51-year-old whisky that you could try for free in various locations. I’m sure this sparked some nappy changes amongst the influencers and Instagramers. From my viewpoint, I thought it was a total misstep and smacked of desperation. It panders to the worst elements of today’s society. The instant gratification and focus around an age statement. Overlooked was the fact that at a strength of 40.3%, something had to be done with this cask so why not send out a brand ambassador across the world to pour it away free? Nice gig if you can get it, I’m sure. Yeah, it may have attracted the odd post and article online, but in today’s instant gratification world of whisky, the influencers and their ilk have the attention span as changeable as the Scottish weather. Today’s post is history the very next day.

And consider the fact that if you’ve had a 51-year-old whisky from a distillery for free, would this encourage you to drop down into the core range and explore what lies beneath? Imagine taking out that McLaren for a test drive and upon your return being offered a shot in a Ford Fiesta? Would that set your heart racing or perk up any interest? Exactly, once you’ve reached that summit, the only way is down. The fact that most of the Last Great Malts range are gathering dust across the country and are focusing on the travel retail sector, confirms it’s another entry in the growing book of disappointing launches.

In saying all of this, I did want to talk about what makes Aultmore an interesting whisky and distillery. It can deliver given the right presentation and circumstances, but we’ll go into that in more detail another time as I promise to review another before the year is out. I’m guilty of not seeking out Aultmore in recent times and this whole article only came around when I won a 10cl sample of this release at a Cadenhead’s Edinburgh lucky dip. Insert comment here about how even the independents cannot give it away.

Upon unwrapping the package, I will admit there was some disappointment. An Aultmore isn’t something to get excited about and a 12-year-old matured in an ex-bourbon hogshead isn’t an attractive tune to the whisky public. The official 12 is ok and borderline priced at £44.95 but a little flawed. This Cadenhead’s was distilled in 2006 and bottled in July 2019, it is un-coloured and unchill filtered giving us a sense of what the official Aultmore 12-year-old should be capable of at 56.4%. Priced circa £50, Cadenhead’s have also bottled a sister cask I believe with a similar strength of 56.6%, both bottled as part of the Authentic Collection – so do consult the label – and there was a Small Batch release recently at 57.4% if you want to up the confusion stakes.

In the mouth: oily and an impressive texture with a rich viscosity. My attention has been snared. More green apples, white chocolate, used tea leaves, aniseed and grapefruit. Chalky towards the finish with liquorice root and Kiwi fruit. Water showcases more oiliness and tartness thereby amplifying all of the above. Pine needles and bashed limes round off this Aultmore.

My personal in-joke at the recent Cadenhead’s tasting was that I paid £25 for a ticket to try the 3 whiskies I had previously pre-ordered. This access confirmed that I would have been disappointed by all 3 purchases. I promptly cancelled them all the following week. By spending £25, I had actually saved circa £150. Proving the wisdom of trying before you buy.

The bonus was this lucky dip Aultmore. If this had been featured within the tasting line-up, I would have only put it 2nd to the 24-year-old Springbank that evening. It has character in abundance without the requirement of a finish. There is much to discover and appreciate here although I would underline this isn’t a beginner whisky.

This is fairly close to the official 12-year-old in terms of price. Frankly, it resides in another taste dimension and the lack of colour may dissaude initial enquiries. Ditch this favouritism of colour and let your senses guide you. A lovely surprise. 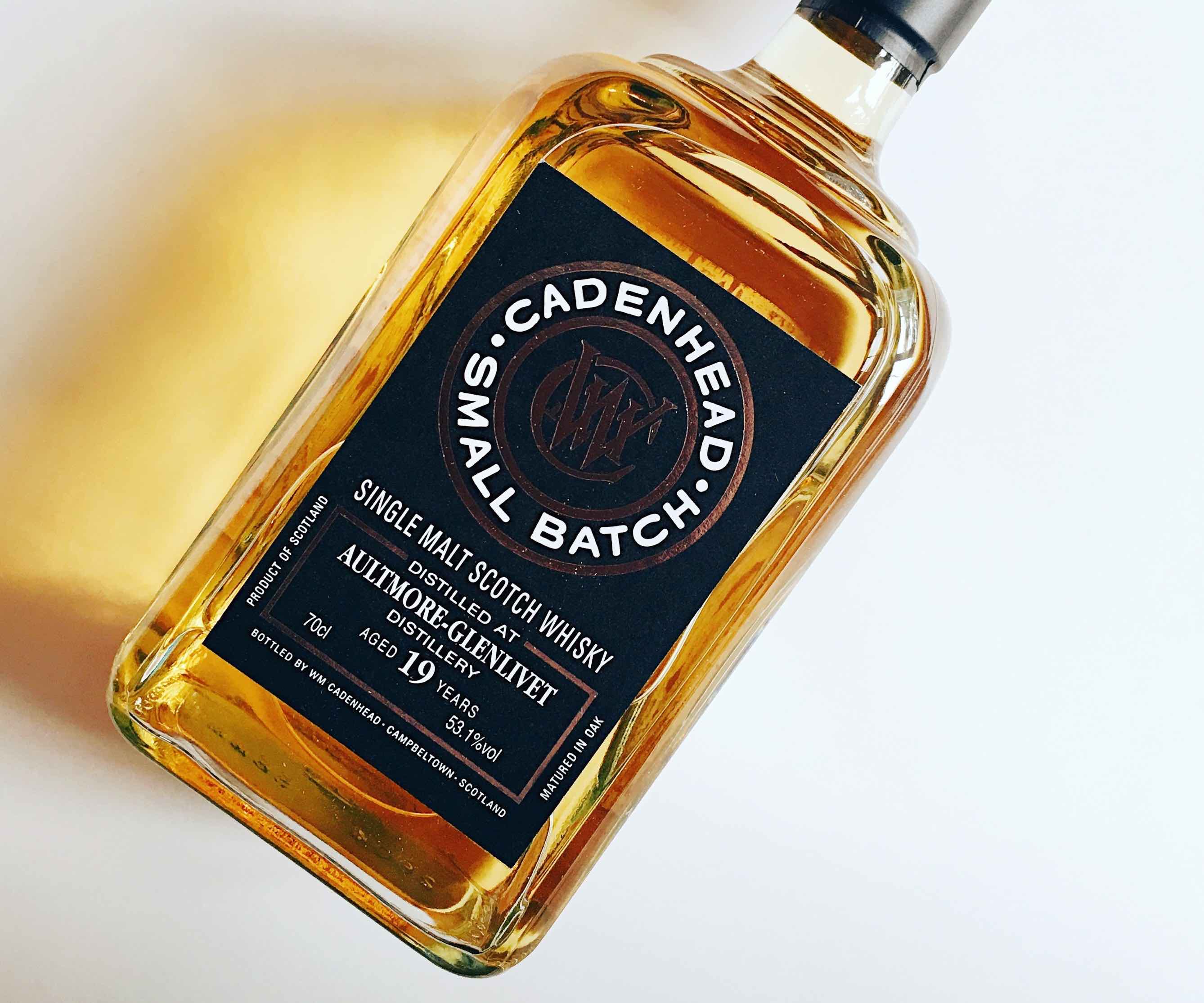