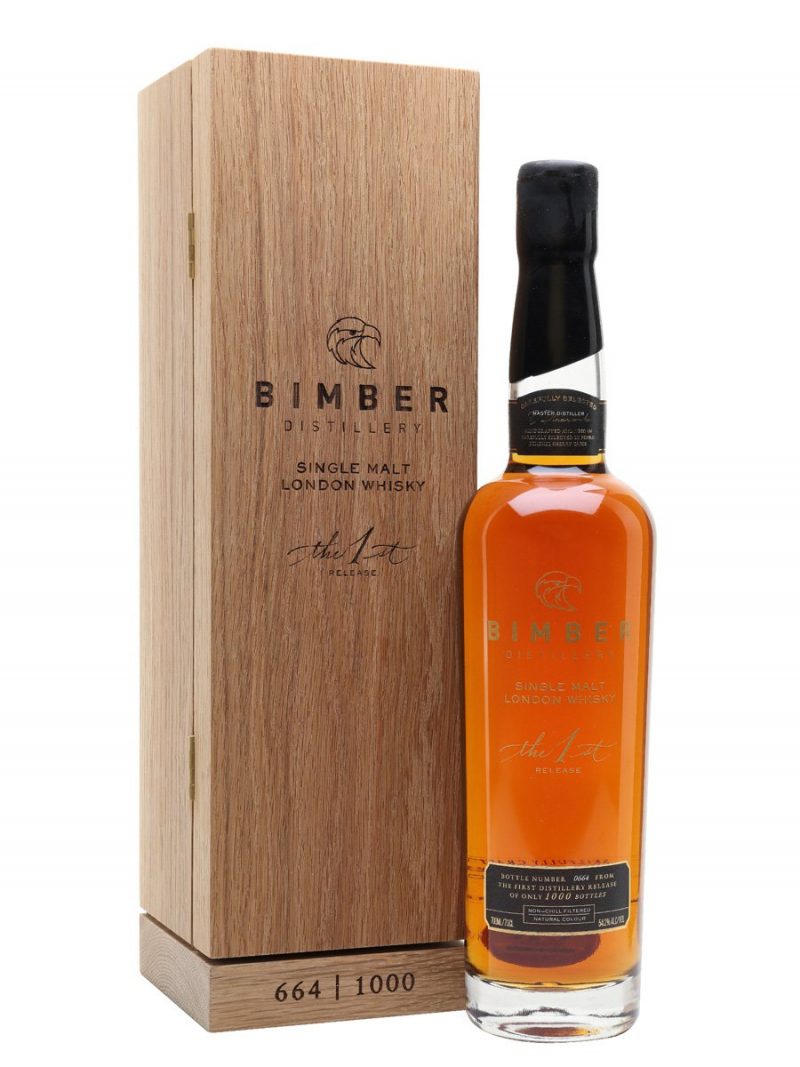 I put this thought out on Twitter recently: though a totally unfair comparison, if you took the average quality of English whisky spirits versus the average of Scotch whisky spirits, the young new world would easily outclass the old. I mean, only a couple of people actually responded to the comment, but it was out there nonetheless, another opinion launched into the online void in hope of self-validation.

Unfair, yes, as there are but a smattering of English distilleries and they are all largely new and mostly motivated by quality. Though I shall not name names, the oldest and most easterly English operation drags the English average down. I have tasted, I think, most of them: we have good things already out from the Cotswolds and I know the Lakes Distillery is creating fine things, and will likely get better once they sort a few little brand issues. New distilleries such as White Peak (a mere 20 minutes from my door) is very, very promising indeed.  The times, if you’re English, are good.

The Scotch distilleries are largely owned by corporations and have had decades of accountants whittling away, refill barrel by fermentation hour, the standards that the English have to rise above in order to let themselves be heard. They can’t hide, as Derek pointed out, behind nostalgia, which is a line I shall steal.

I suppose we’re really starting to reach critical mass now as a global industry and I must admit, it will be very interesting to see just how the next few years pan out, in England as much as anywhere else. Is the market for single malts – niche whisky, let’s call it that – be enough to sustain so many new distillery projects. There are really two parallel industries, a bit like universes that live side by side, on top of each other perhaps; alternate dimensions. On the one hand is the staggeringly large volume industry for blends and obscure, international brands that you’ll have never heard of but which will sell by the shipping container; on the other is this, the one you lot pay attention to, the tip of a whisky iceberg, single malts, single casks. There are only so many of you, though you are growing, but will that few hundred bottles of a new release be enough to keep these new businesses afloat? Will the demand be there? Does the business model work? I do hope so.

One of the things I wonder about is just how easy it is for these new English distilleries to be heard amongst all the international noise? Indeed, for a distillery of any size competing for your eyeballs becomes rather hard when there are so many others saying similar kinds of things – a new release, something exciting, so and so casks, master whatever. How does one cut through? I am certain many of the distilleries will become a local celebrity like gin tends to be, but regional gins must find it hard to break across the county border. Will the same be said for whisky? Will the London distilleries find it hard to battle the likes of the Cotswolds or the Lakes on their home turf? Will sales become a regional thing? Is tourism the future?

The question, then, is how can they be sustained. Business models are built upon current beliefs, and as we all know with whisky, historically speaking, there are crashes as well as booms. What, then, of all of these smaller venues? Does the fact that they are little tourist experiences mean they’ll weather the storms? Or does it mean that interest in whisky tourism will one day subside? Worst-case scenario, much of the stock can, I suppose, be sold off to blenders, and the safety of having aged stock allows these places to roll the dice somewhat. But what will be the breaking point? What is the capacity of the English whisky industry as we see new places being granted planning permission in the middle of nowhere?

Anyway, enough about the English as a whole (and I shall attempt to be reasonably brief as there are three tasting notes). Bimber. Normally I would bang on about the production details, because (spoiler alert: this whisky is fantastic) those details matter. However, back in the summer, the much-missed Adam, currently on his cider sabbatical, visited Bimber Distillery and had many nice things to say about it. Do read his superb write-up to hear about super-long, but more importantly controlled fermentations, alembic stills and proper wood policy. Go on, read it. It’s all you’ll ever need to know about the place.

But at last, Bimber’s first whisky is here: the First Release. It has been matured in five properly active Pedro Ximénez casks for three years, and cost about £120. How does this stack up against the rest of the English? 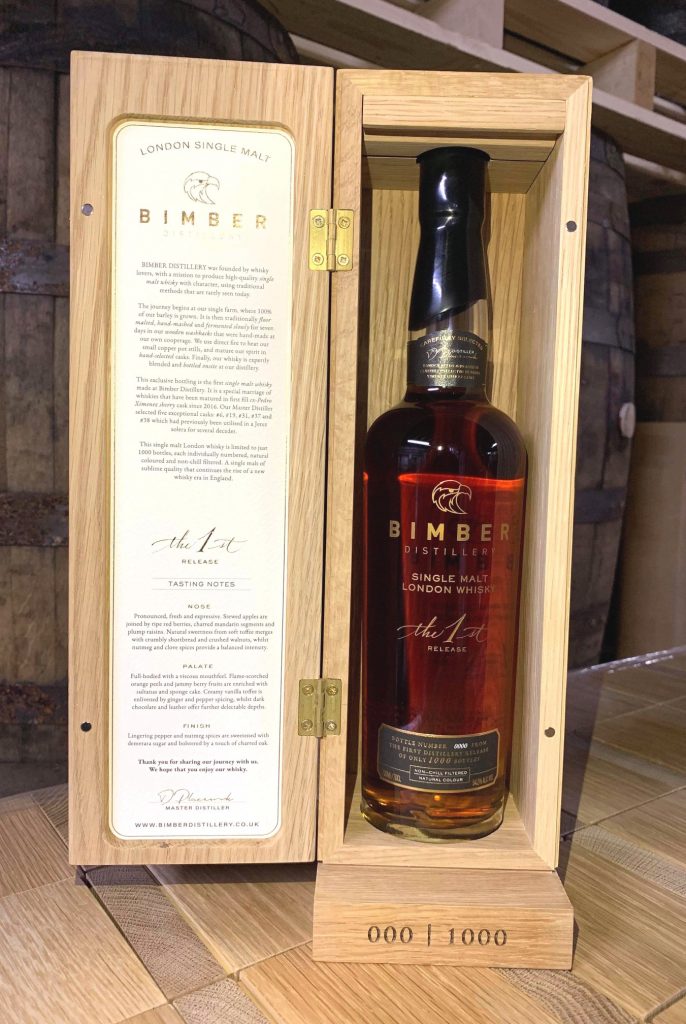 On the nose: a sherry bomb, some might suggest, but it’s actually not as darkly rich: intense, yes, but lighter dried fruits such as apricots, sultanas, and then Seville orange marmalade. Mixed peel. Mince pies. Sour cherry and damsons; beeswax. Lots of sherry influence without a doubt, but there’s a real freshness, vibrancy about the spirit.

In the mouth: a hugely, thick texture – there’s a well-made spirit. Massive. Beautifully cloying with heavy dried fruits and a rush if tiramisu. This. Is. Gorgeous. A smidge of bitter dark chocolate, not at all woody or prickly. Headier dried fruits than the nose: figs, raisins; blackcurrant. Hedgerow jam. Cinnamon. Just a hint of mushroom earthiness, sourdough. But I want to come back to this texture, which is one of the nicest feeling spirits I have ever put in my mouth, if not the most complex (only five casks). Warming tobacco on the finish.

I had more than one sample of this sent to me. I’ll be honest, I drank one casually – as I feel that’s what most of you might do, rather than sitting at a keyboard having to think – and I was just bowled over. It was gorgeous; a gregarious, voluptuous companion for the evening. I had no intention of sending any of this to Jason – he prefers to wrap his lips around some dodgy old bourbon cask releases, or being a Daftmill local fanboy, and has no interest in flavoursome, active sherry cask maturation that has happened south of the border. This would be wasted on him. If I had a flaw it would be that, being an inaugural release they’ve clearly wanted to go out of the blocks with something potent; it would be very interesting to get a touch more of the spirit, to observe some DNA, to really find out who Bimber is. That, I suspect, comes with time.

Anyway, despite that, one of the best whiskies of the year for me and it’s a whipper-snapper. Three. Years. Old. And one of the best things you’ll put in your mouth this year. See what paying attention to the production process does? Making good spirit – before it goes in casks? And then having, y’know: fresh wood and not tired old shit? I feel for £120 or thereabouts, this is good value – because it’s the inaugural release, and many distilleries would be quite happy to take the p*ss for their first whiskies. It’s reasonably priced, to my mind, no faffy auctions to make spurious press releases, no eye-wateringly bad behaviour that we saw up at the Lakes.

And now for a special guest – Adam‘s back!

On the nose: Somewhere in darkest Derbyshire my editor will be sniffing this with peals of
pleasure. Just a beautiful, rounded, intense sherry nose, backed up by ripe, fruity spirit. Let
me count the layers of brown sugar, nutmeg, sultana, plum jam and leather.

In the mouth: The most gorgeously textured palate of any English whisky yet. Flavours are a
little more of distillate here – more tropical fruits, more strawberries – but slathered in rich,
dark chocolate. Raisins and a smatter of dunnage in behind, then another wave of chocolate
crashes over again. Alcohol is prominent, but not distractingly so.

And now for the miserable Scotsman…

On the nose: Terry’s chocolate orange, kindling, apricot jam and quite sweet. Brown sugar, toffee and memories are revived of a Hampden funk ester dynamic. It’s not hugely complex and owes a chunk of its character to the wood with those inherent PX fruity qualities. A touch of smoke maybe a spent firework. Baby rusk biscuits, plasticine and rum fudge. Time, I felt revealed some butterscotch. Nothing inoffensive whatsoever. Water, I felt wasn’t that beneficial, reviving memories of iodine on the fringes.

In the mouth: all about the sherry in reality. A long finish it must be said for its age with a touch of dryness. Red apples, grapes and marmalade. Cloves, cinnamon bark, dried fruit and mixed spice. Water unlocks chocolate and cracked black pepper. All of which leaves me questioning where’s the Bimber?

Well, I have to thank London Whisky Club and in particular @whitstablewhisky for this sample. Mark was going to send me some, but never got around to it and instead drunk his spare sample. I’m not surprised, so it was very fortuitous that this sample came my way during an Edinburgh tasting.

I haven’t read Mark’s review at the time of typing this, however, if I was betting man, I’d wager based on past rants and recent tweets, it’ll take the form about English whisky being so good at a young age compared to the Scottish dinosaurs. That and tired wood; I bet I’m right!

This whisky was very much on my mind when it was released. It may have sold out in a few hours but I was in early and thought long and hard about it. What put me off was the use of sherry. What I’m interested in isn’t sherry; I want to taste the character of Bimber and not the host. Ex-bourbon remains the best vessel for this and even Adam (who loves a wine or sherry cask), felt on his recent visit that it was the ex-bourbon and virgin oak that impressed. This was backed up by the LWC duo I met in Edinburgh – a tangible excitement around all things Bimber.

I expect the best is to come and when those moments of promise land in bottle form, I’ll be there. For now, this inaugural release ticks a box and I’m interested. The nose in particular with memories of esters is intriguing so let’s give these new distilleries the time they need; whether it is south of the border, in the homeland or further afield. There are plenty of whiskies to be enjoyed in our own time and this is a solid and expensive inaugural release, but nothing more.

Image from The Whisky Exhcange. 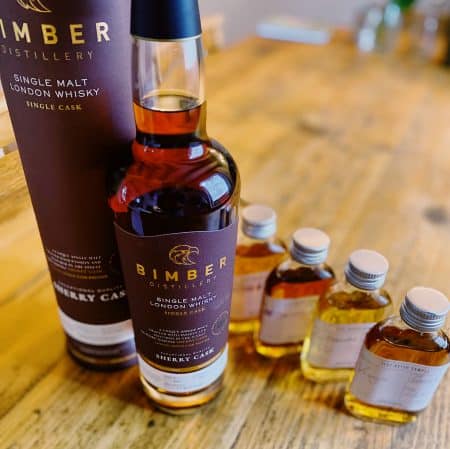 A fistful of English whiskies